Doris Day and Gene Nelson provide plenty of "hip hooray and ballyhoo" in the backstage musical Lullaby of Broadway. The story of a young woman who seeks a reunion with her mother and finds romance with a hoofer and ultimate theatrical success instead lacks flair, but the numbers, set to classic tunes by Gershwin, Porter, and others, showcase Day's mellifluous voice and reveal her surprising terpsichorean talent. A new HD master spruces up this tuneful antique that may not be Day's best, but is still Worth a Look.

1951 would prove to be the busiest year of Doris Day's movie career. Eager to capitalize on her soaring popularity, Warner Bros shoved its shiny new star into five films, then watched with delight as the money rolled in. One of those cash cows was Lullaby of Broadway, an innocuous musical confection featuring a jukebox of songs by such esteemed composers as George Gershwin, Cole Porter, and Harry Warren. The third of six films Day would make with director David Butler, Lullaby of Broadway - like many musicals of its era - employs a flimsy story as an excuse to string together an array of charming, energetic numbers that show off not only Day's silky smooth vocals, but also her tiptop terpsichorean talent, a part of her triple-threat arsenal audiences had heretofore only glimpsed.

Truth be told, Day only became a singer because a horrific car accident at age 15 crushed her aspirations of becoming a professional dancer. During her lengthy convalescence, the bored, bedridden Day would sing along with the radio, and the rest, as they say, is history. Lullaby of Broadway offers Day the chance to croon such beloved standards as "Just One of Those Things" (performed with plenty of verve a la Fred Astaire in top hat, white tie, and tails), "Somebody Loves Me," "You're Getting to Be a Habit with Me," and the bouncy title tune that opens with a homage to the iconic production number director Busby Berkeley built around it in Gold Diggers of 1935. All the first-rate songs compensate for a second-rate story that almost succeeds in sinking this otherwise buoyant Technicolor musical. 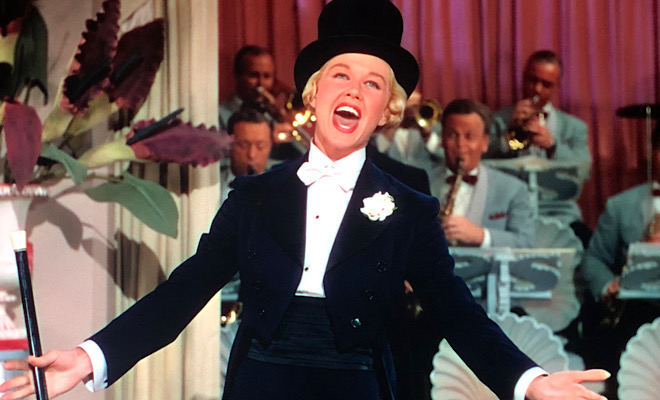 As it meanders along, the plot of Lullaby of Broadway borrows elements from other films (most notably Lady for a Day) and features the usual array of misunderstandings. Day plays Melinda Howard, a successful nightclub performer in London who returns to New York City after a dozen or more years to surprise her mother Jessica (Gladys George), a glamorous Broadway star who lives in a swanky townhouse...or so Melinda thinks. What she doesn't know is Jessica has fallen on hard times and is now a boozy chanteuse reduced to performing in shady bars. Adolph Hubbell (S.Z. Sakall), a beer magnate, and his uppity wife Anna (Florence Bates) now reside in Jessica's former mansion, but their butler and maid (Billy De Wolfe and Anne Triola) are aware of and sensitive to Jessica's delicate situation and decide to tell Melinda her mother is away on tour rather than share all the sordid details of her decline.

More mixups result when Adolph, who allows Melinda to stay in his home while she awaits her mother's "return," takes a fatherly interest in Melinda after she's cast in a Broadway show he is backing. Her co-star Tom Farnham (Gene Nelson) instantly becomes smitten, but after Adolph buys Melinda a fur coat in appreciation of her fine work, both Tom and Anna misinterpret the gesture and question his intentions. They also misjudge Melinda. Of course everything gets sorted out in time for the "Lullaby of Broadway" finale, but it's a shame it takes so long. 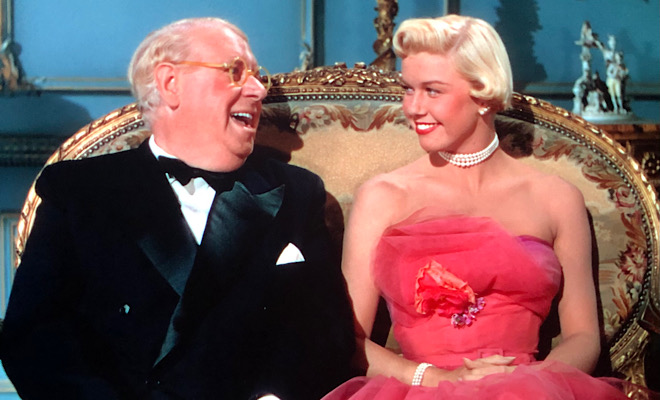 Day appears overly naive throughout, even by her own overly naive standards, but as usual, her beguiling authenticity - and more importantly, her voice - rescue the film when it falters. Much like Judy Garland, Day completely enraptures when she sings, caressing melodies with her honey-toned vocals and transmitting every lyrical nuance. Couple that with her fresh face and million-dollar smile and it's impossible to concentrate on anyone else while she's on screen.

Nelson, a terrific dancer who combines Astaire's elegance with Gene Kelly's athleticism, graduates to leading man status after supporting Day in the previous year's Tea for Two and The West Point Story, and he makes the most of the opportunity. Perhaps best known for his portrayal of cowboy Will Parker in the movie version of Oklahoma!, Nelson files an earnest performance here and takes no prisoners on the dance floor. His agile, exciting routine for "Zing! Went the Strings of My Heart" includes a breathtaking leap onto the top of an upright piano, and later he and Day deftly incorporate two swinging glass doors into the delightful "Somebody Loves Me" number (see clip below). The only dance that slightly misfires - set to "I Love the Way You Say Goodnight" - incorporates gimmicky slow-motion photography, a misguided and unsuccessful attempt to match what Astaire did with the process in Easter Parade a few years earlier.

In addition to Nelson, Lullaby of Broadway reunites Day with Sakall and De Wolfe, both of whom also appeared in Tea for Two. Sakall, as usual, supplies plenty of warmth and humor (and more than lives up to his nickname "Cuddles"), while the always arch and amusing De Wolfe exhibits his musical talent in "You're Dependable," a fun comic duet with Triola. A game Gladys George struts her stuff, selling two songs to a raucous saloon crowd, but the movie's most unusual number is a bizarre specialty act with two life-sized dummies performed by a very limber Constance De Mattiazzi.

Lullaby of Broadway is far from Day's best or even most enjoyable film, but it's a pleasant diversion that showcases the star while she was still ascending and developing. And it reminds us once again what a magnetic and enduring talent Doris Day is and always will be. 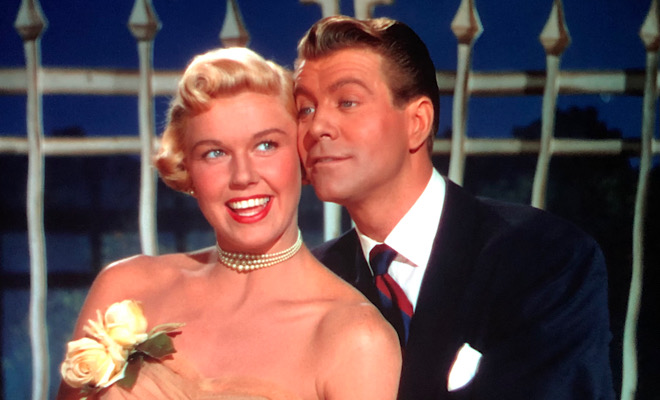 Vital Disc Stats: The Blu-ray
Lullaby of Broadway arrives on Blu-ray packaged in a standard case. Video codec is 1080p/AVC MPEG-4 and audio is DTS-HD Master Audio 2.0 mono. Once the disc is inserted into the player, the static menu without music immediately pops up; no previews or promos precede it.

A new HD master brightens up Lullaby of Broadway, but the 1080p/AVC MPEG-4 transfer falls a bit shy of the other recent Doris Day Blu-rays released by Warner Archive. There's nothing at all wrong with the image - it possesses excellent clarity and contrast, exhibits a lovely film-like feel, and faithfully honors cinematographer Wilfrid M. Cline's yummy Technicolor photography - but just doesn't provide the dazzling eye candy to which other Day films like Romance on the High Seas, My Dream Is Yours, On Moonlight Bay, and The Pajama Game treated us.

Most scenes are quite pleasing, but a few appear a bit soft and dark, and long shots err slightly toward the fuzzy side. The rich blacks of Day's tuxedo in the opening number make a statement, the bright, well-defined whites resist blooming, and bold primaries punch up the frame on occasion. The subtle pastels don't exude as much oomph as they do on other Day titles, and though close-ups are plenty sharp, they lack any arresting details. The clean source print is a blessing and the overall presentation earns high marks; it's just that Warner Archive has so lavishly spoiled us over the past several months, any transfer that doesn't rate five stars seems like a disappointment. This one is just fine and certainly a nice step up from the previous DVD, which should make all of Day's legions of fans very happy.

The DTS-HD Master Audio 2.0 mono track supplies clear, well-modulated sound, but the track does have one notable hiccup. For some reason, the tapping in all of the tap dance sequences sounds incredibly dull, almost muted. Taps in most Golden Age musicals were overdubbed in post-production so they exude a springy crispness that supplies essential rhythm to the instrumentals. Is it possible no overdubbing was performed on the Lullaby of Broadway soundtrack or was an alternate track used for this Blu-ray release that doesn't contain the overdubbing? Whatever the case, the effect is jarring and diminishes the impact and excitement of the well-choreographed dance numbers.

Excellent fidelity brightens the songs and a wide dynamic scale handles all the highs and lows of the orchestrations and Day's golden-toned vocals without a hint of distortion. No age-related hiss, pops, or crackle intrude and most of the dialogue is easy to comprehend. I say most, because the always adorable Sakall has a thick Hungarian accent and tends to speak rather fast, so some of his lines - at least to my ears - are unintelligible. Though the tap mystery is puzzling, the overall audio - especially when one considers the film's age - is still stellar.

The only disc extra is the film's three-minute original theatrical trailer that hypes Lullaby of Broadway as "a musical joy-ride along the Great White Way!" starring "delightful Doris Day."

A selection of stellar standards by a variety of top-tier composers and the musical charms of Doris Day and Gene Nelson make Lullaby of Broadway an entertaining diversion. The backstage story punctuated with multiple misunderstandings doesn't amount to much, but it's always a treat to hear Day sing, and here she also shows off her considerable terpsichorean talent. A new HD master spruces up this 70-year-old musical that's a showcase for the always sunny Day. Worth a Look.