Ladies They Talk About

Women-in-prison films have enjoyed a loyal cult following for decades, but Ladies They Talk About just might be the movie that started it all. Snappy and sassy, with colorful characters, plenty of excitement, and a requisite catfight, this captivating pre-Code drama features a fiery Barbara Stanwyck as a tough-as-nails inmate hoping to exact revenge on the smitten evangelist who betrayed her. A gorgeous transfer struck from a new 4K scan of the original nitrate camera negative makes Warner Archive's Blu-ray presentation of this crackling antique an unqualified delight and must-have for every diehard Stanwyck fan. Highly Recommended.

She began her film career at Columbia Pictures, but it only seems fitting a bold, gutsy, hard-working actress like Barbara Stanwyck would soon find her way to Warner Bros, Hollywood's blue-collar studio known for its rough-and-tumble, down-to-earth fare. Lucky for us, Stanwyck inked her Warner deal before the censors began stifling the motion picture industry, and though Ladies They Talk About hardly ranks as a work of cinematic art, it stands as a rollicking pre-Code prison drama that's a hoot from start to finish, thanks to snappy dialogue, wisecracks galore, and plenty of brazen attitude.

Stanwyck plays Nan Taylor, a sassy, saucy gangland moll who gets busted when her cover is blown during a bank heist. Though evangelist and aspiring politician David Slade (Preston Foster) rails against crime at his fire-and-brimstone revival meetings, he harbors a soft spot for Nan, who grew up in his hometown. Slade not only believes Nan's ardent professions of innocence, he also promotes her as a victim of a corrupt system, a stance that sticks in the craw of the district attorney (Robert McWade), who worries Slade's vociferous defense of Nan over the airwaves might jeopardize his re-election.

To hedge his bet, the D.A. decides to parole Nan and names Slade her custodian, but before the papers can be signed, Slade confesses his amorous feelings to Nan, which leads her to trust him and confess her role in the robbery. Crushed by her admission of guilt, the moralistic Slade rejects the parole deal and thus paves the way for Nan's trial, conviction, and incarceration at San Quentin. 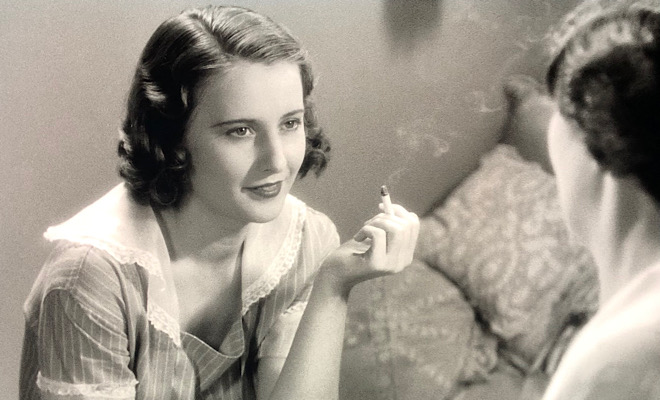 Once inside prison walls, the bitter Nan bides her time as her hatred of Slade, who still holds a torch for her, festers. Things get complicated, though, when two of her cohorts end up behind bars and need Nan's help to plot their escape. Nan goes all in, hoping to exact revenge on Slade in the process by manipulating him into unwittingly abetting the jailbreak.

Social issue films were Warner's bread-and-butter during the early 1930s, and though Ladies They Talk About doesn't expose reprehensible conditions at women's prisons (on the contrary, it goes out of its way to soften - some might say even glamorize - the environment), it was one of the first movies to depict what life was like for female convicts in the slammer. It also weaves topical elements like evangelism into a plot that may not be plausible but zips along at a breakneck pace. There's not a dull scene in the 69-minute film that marks the second directorial effort of William Keighley, who would go on to helm such classics as Each Dawn I Die and The Man Who Came to Dinner. (Howard Bretherton, who handled the action sequences, is credited as co-director.) 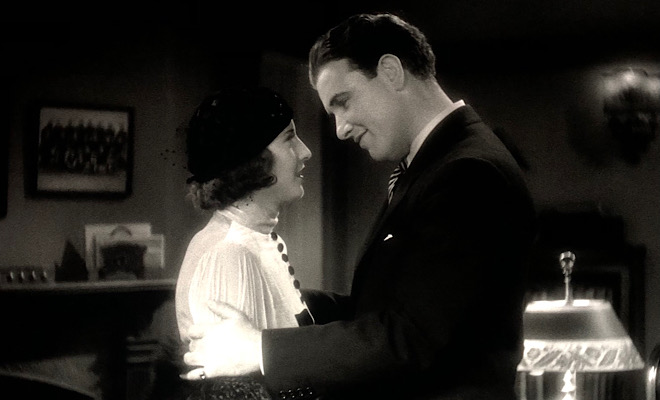 Let's face it, though, Ladies They Talk About would be nothing without Stanwyck, who sinks her teeth into Nan like she does with every role she ever played. Unlike other stars of her day who shamelessly overact, Stanwyck becomes her characters, and the result here is a disarmingly natural performance marked by raw explosions of emotion. In one scene, she dresses down Foster's Slade with such fury and abandon she literally froths at the mouth, and in another her vitriolic tirade directed at a prison matron crescendoes to the boiling point. Stanwyck also knows her way around a wisecrack (she slings plenty throughout the film), connives like a pro, and expresses heartbreaking tenderness on more than one occasion. With seeming ease, Stanwyck transforms the cardboard Nan into a dimensional character, and her riveting portrayal enlivens and elevates Ladies They Talk About.

In other roles, the strapping Foster makes a fine Stanwyck foil (they would appear in two other pictures together, including Annie Oakley), the always marvelous Ruth Donnelly shines as a sympathetic prison guard, and Lyle Talbot exudes a dashing machismo as the heist's head honcho. The most fascinating bit of casting, though, is 23-year-old singer Lillian Roth as Linda, Nan's best prison pal. The fresh-faced Roth more than holds her own with Stanwyck, delivering several pointed quips and briefly stealing the spotlight when she coyly sings "If I Could Be with You" to a photo of actor Joe E. Brown pinned to her cell wall. (A musical number in a prison movie? You gotta love it!) Sadly, not too long after the release of Ladies They Talk About, a severe bout with alcoholism derailed Roth's career for many years. She wrote about the ordeal in her 1953 autobiography that would be adapted into the hit movie I'll Cry Tomorrow starring Susan Hayward, who received a Best Actress Oscar nomination for her gritty portrayal of Roth. 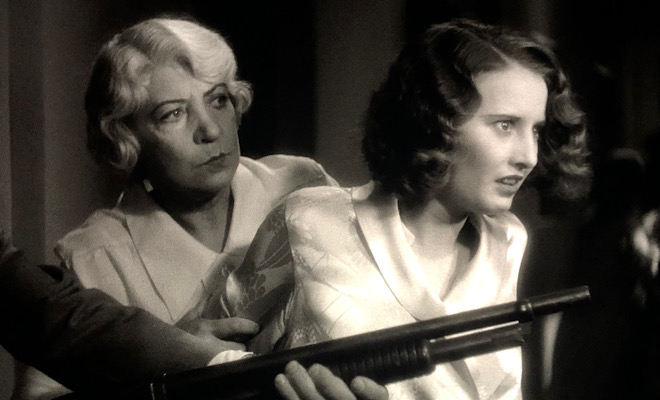 Ladies They Talk About never will be regarded as one of Stanwyck's best films, but it delivers on many levels and remains terrifically entertaining today. Stanwyck, as always, is the spark plug that ignites this raucous, far-fetched tale of feisty women who take it on the chin and come back swinging, and she's the only reason we're still talking about Ladies They Talk About almost 90 years later.

Vital Disc Stats: The Blu-ray
Ladies They Talk About arrives on Blu-ray packaged in a standard case. Video codec is 1080p/AVC MPEG-4 and audio is DTS-HD Master Audio 2.0 mono. Once the disc is inserted into the player, the static menu without music immediately pops up; no previews or promos precede it.

A brand new HD master from a 4K scan of the original nitrate camera negative yields an absolutely jaw-dropping 1080p/AVC MPEG-4 transfer. From the moment the opening credits flash across the screen, it's instantly evident we're in for a treat, and over the next 69 minutes the image rarely falters. Spectacular clarity and contrast combined with beautifully resolved grain produce an arresting film-like picture that features deep blacks, bright whites, excellent shadow delineation, and an impressive grayscale.

The picture is so crisp you can see faint reflections in a windshield, the glistening sheen of fresh ink on a sheet of paper, and bits of spittle emerging from Stanwyck's mouth as she chews out Foster during the climactic scene. Patterns remain rock solid throughout, costume and upholstery textures come through cleanly, sharp closeups highlight an array of fine facial features, and not a single nick, mark, or errant scratch sully the pristine print. A couple of process shots look a tad rough and a smidgen of softness creeps in now and then, but those are very minor issues afflicting an otherwise fantastic rendering of an 88-year-old movie. I've seen a lot of early 1930s films on Blu-ray, but I've gotta say it just doesn't get much better than this.

The DTS-HD Master Audio 2.0 mono track supplies wonderfully clear, well-modulated sound, especially when you consider the film's advanced age. Impressive fidelity showcases the hollow tones of voices in cavernous interiors and the thunderous applause that greets Slade's orations, while sonic accents like gunfire, the humming of the industrial laundry equipment in the prison, and facial slaps and fisticuffs exude a pleasing crispness. The isolated instances of music and Lillian Russell's lilting vocals sound rich and full and all the banter, barbs, and zingers are easy to comprehend. Some faint surface noise is still audible, but it never distracts from the on-screen action. Primitive recording techniques often hamper films of this vintage, but this track mitigates almost all of the deficiencies and provides a pleasing listening experience.

A couple of vintage extras enhance the appeal of this disc.

A terrifically entertaining pre-Code prison drama, Ladies They Talk About combines snappy dialogue, breakneck pacing, and an engrossing plot, but the film's biggest drawing card is a young Barbara Stanwyck, who tears up the screen as a tough gangster moll behind bars. Warner Archive's superior Blu-ray presentation, distinguished by a five-star transfer culled from a 4K scan of the original nitrate camera negative, heightens the appeal of this rollicking film that every Stanwyck fan should have in their collection. Highly Recommended.