Before Dracula, there was Carmilla in Hammer’s The Vampire Lovers! A sultry vampiress who bewitches and preys upon the blood of young virgins in order to prolong her unnatural life. Starring Ingrid Pitt, Pippa Steel, Peter Cushing, and Douglas Wilmer, the film plays with the well-known vampire myths and crafts an impressively mounted gothic horror production while still making ample time to highlight ample fleshy bits and gore. Scream Factory updates their previous release giving this new edition a genuinely spectacular video restoration complete with tons of new and interesting bonus features to devour. If Hammer Horror is your thing - Highly Recommended.

“Within the more often remembered, even cherished, Hammer Films horror cannon, the inherent, seductive sexuality of the vampire had always been an indirect and coded fact. We knew there was something sensual of the way attractive older gentlemen sought after young, voluptuous women with a lustful, predatory determination. But by the end of the 1960s, especially after Polanski's Rosemary's Baby and Romero's Night of the Living Dead changed the genre, the production company decided to upgrade their signature approach of vampire lore. While their familiar design, mood and gothic atmosphere mostly remained the same, the Hammer films of the 1970s were an attempt to better reflect the contemporary attitudes and concerns of the new counter-culture.

Loosely based on the 1872 novella Carmilla by Sheridan Le Fanu, The Vampire Lovers was one of the company's first experiments. The movie is particularly noteworthy for its explicit depiction of nudity and blatant scenes of lesbianism. Whereas the vampire's sensual attraction was only alluded to in previous films, director Roy Ward Baker (A Night to Remember, Quatermass and the Pit) here makes it overt and puts it in plain sight. It's a rather valiant endeavor to make the once-great Hammer hip, current, and edgy, an effort that would actually manage to keep the company afloat for the rest of the decade. Whilst Baker's direction and Moray Grant's photography show some visible creativity and style, the story, itself, falls a bit short and can feel a little stale in some areas.”

For my part, ever since I was a kid I’ve loved Hammer’s brand of horror. I haven’t seen everything from their catalog - but I'm do my best to find those missing pieces. In this ongoing quest, one title that always stood out to me was The Vampire Lovers. After so many Dracula, Mummy, and Frankenstein films here was something that didn’t feel like it was trying to cash in on a known name. Not many people know the Carmilla story - I only accidentally discovered it myself - so this was a fresh take on a familiar theme. It offers a familiar blood-lusting creature while exploring frank sexual themes but in an honest earnest way. Hammer would later become far more bawdy and overt with their films and lean heavier into the T&A qualities in between bouts of gnarly bloodletting. 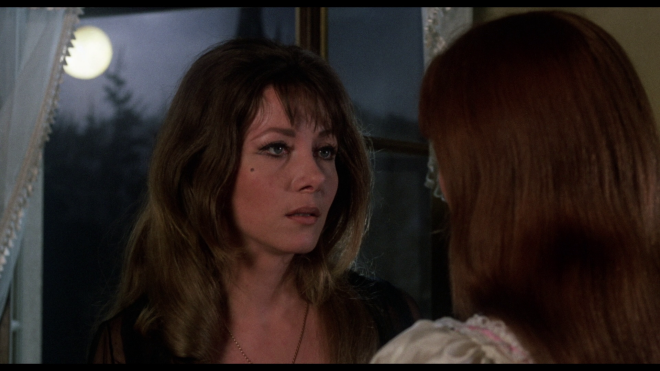 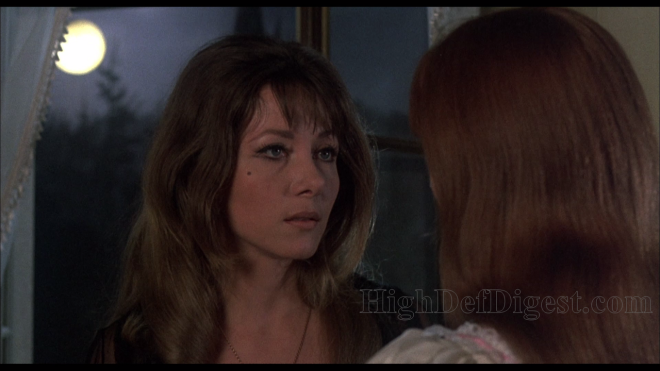 If there is a criticism I have, it’s for a film that barely runs 90 minutes it takes a long time to get to where it's going. While this is great for character setup and world-building material, it also doesn’t pick up the pace when it needs to. When things should be coming to a dramatic climax, it all plays out rather rudimentary without a lot of fanfare. The saving grace is the great cast topped by Ingrid Pitt as the sultry Marcilla. Pippa Steele and Madeline Smith are great in their respective roles with Peter Cushing again rising to the occasion as the wounded father General von Spielsdorf. The Vampire Lovers certainly isn’t the best of Hammer’s catalog, but it’s far from the worst and certainly delivers some high entertainment value. Beautiful photography and solid performances keep this film from rotting in its grave.

Vital Disc Stats: The Blu-ray
After an already decent release in 2013, Scream Factory upgrades The Vampire Lovers to full Collector’s Edition status. Pressed on a single BD-50 disc, the disc is housed in a standard keepcase with identical slipcover and reversible insert art. The disc loads to a standard main menu with traditional navigation options. 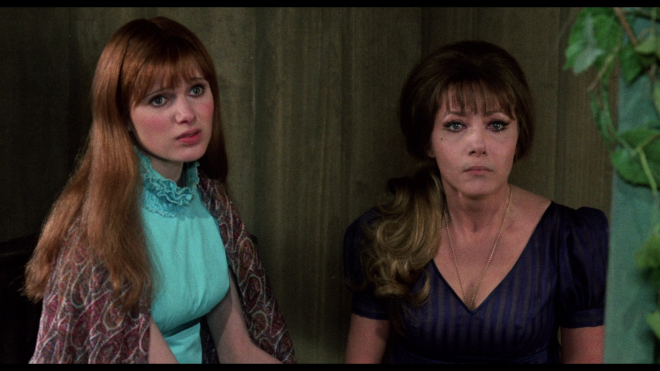 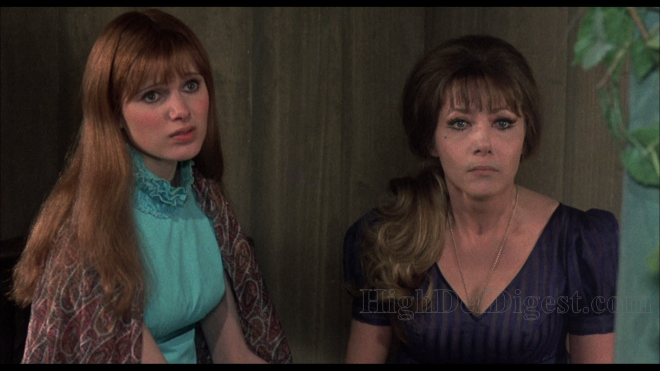 The Vampire Lovers rises from the grave delivering a truly spectacular 1.85:1 1080p transfer sourced from a new 4K scan of the original camera negative. From the first shots of the odd little prologue, the film looks marvelous. If Scream Factory had wanted to start issuing 4K UHD releases of their Hammer collection, this was a great place to start. Details are clean and clear allowing you to fully appreciate the impressive set design and production design, costuming, and of course various bits and pieces. Colors are bold and healthy with bright strong primary blues and reds as a highlight. Black levels are nice and inky giving the image some excellent shadow depth. The elements are in great shape without any signs of serious age-related wear and tear. Shout has been bringing these classics back from the dead and each release gets better and better. There are some scenes in this transfer that look like they were shot yesterday. 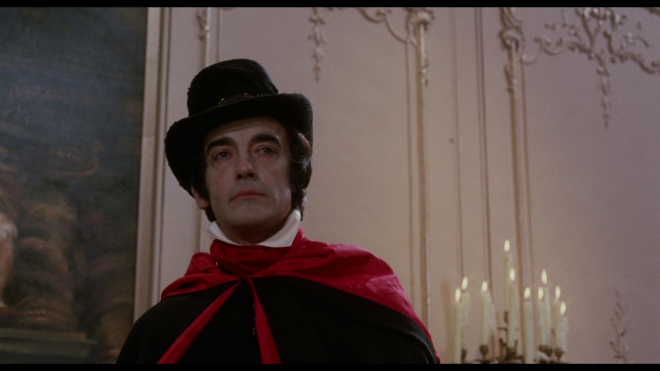 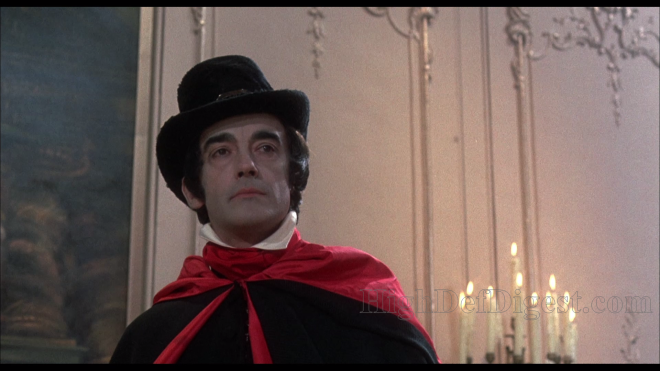 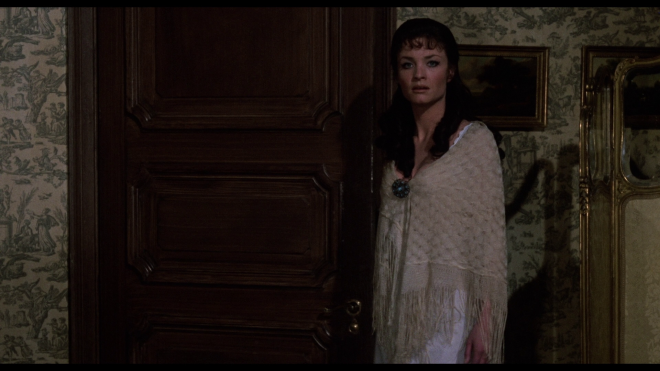 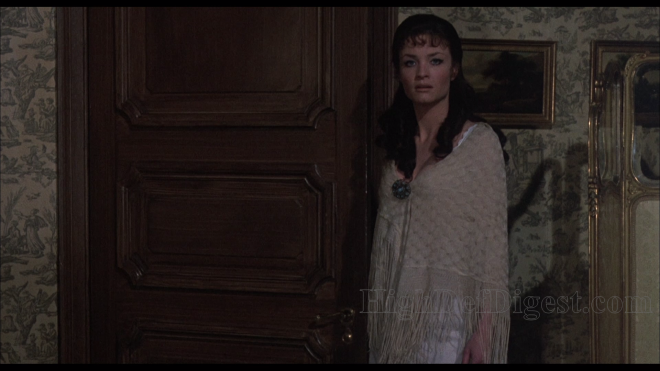 The Vampire Lovers arrives with what sounds to be the same very good DTS-HD MA 2.0 mono track as before, which is fine. This track always had a strong presence with clean dialog, scoring, and sound effects. Some of the ADR work is a bit on the nose and obvious but that’s really the only nitpick I have to offer. The opening ball is active and lively and outdoor locations can feel expansive. 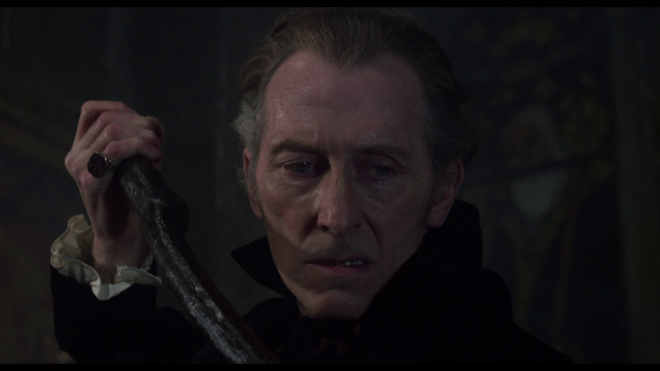 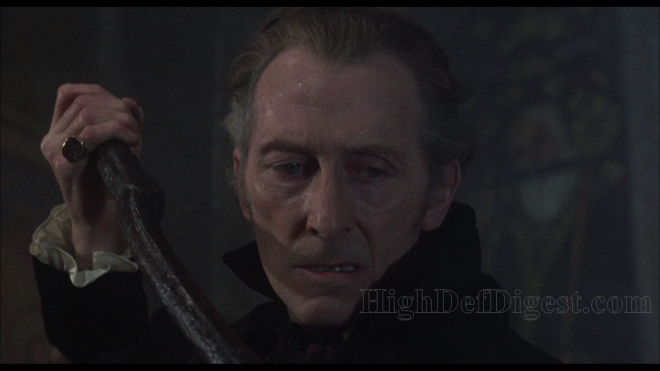 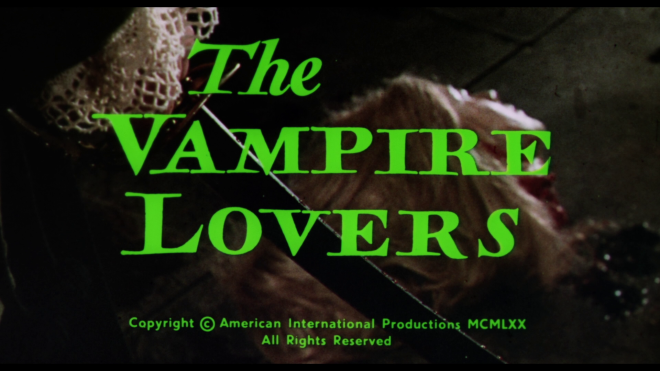 Scream Factory continues to resurrect the Hammer Horror classics. The Vampire Lovers may not be the most famous or most memorable entry in that catalog, but it’s a solid flick with a nice eerie gothic horror vibe. A great cast headlined but the sultry Ingrid Pitt and the slick direction from Roy Ward Baker keep the film going even as it stumbles with the pacing in the home stretch. Scream Factory outdoes themselves giving this film a welcome upgrade sporting a sparkling brand new transfer and tons of great bonus features to devour. If you’re a Hammer fan, this is another essential piece of the collection - Highly Recommended.