Warren Beatty's crowning achievement at last receives the Blu-ray treatment it has long deserved. Newly restored and remastered from the original negative, Reds looks and sounds better than ever before. The story of American Communist sympathizer John Reed and his love for mercurial writer Louise Bryant may not merit 195 minutes of screen time, but Beatty's Oscar-winning direction remains impressive throughout and - along with an array of fine performances and glorious cinematography - makes Reds worth watching at least once. Recommended.

I first saw Reds shortly after its 1981 premiere back when I was a college student and I still remember the intense buzz swirling around Warren Beatty's ambitious epic about a controversial - and rather obscure - American radical. John Reed, a fiery journalist and Communist activist who traveled to Russia to witness and support the 1917 Bolshevik Revolution (and later chronicled his experiences in the notorious book "Ten Days That Shook the World"), seems an odd man to build a 195-minute movie around, but Beatty was determined to depict the last five years of Reed's life and zero in on his stormy romantic relationship with feminist Louise Bryant, who shared Reed's leftist views yet struggled mightily to forge her own identity. Paramount, unsure of how to market such an esoteric production (was there really a market for a movie about one of the only U.S. citizens to be buried inside the Kremlin?), hyped Reds as a Gone with the Wind clone, but Louise and John are no Scarlett and Rhett, and while Beatty's film brims with substance and runs on style, it lacks the passion and emotional connection of Hollywood's great love stories.

Reds left me cold 40 years ago, despite my admiration for Beatty's sweeping, often artistic direction, Vittorio Storaro's beautiful, Oscar-winning cinematography, and the array of top-notch performances from a cast of current and future legends, including Beatty, Diane Keaton, Jack Nicholson, Gene Hackman, Maureen Stapleton, Paul Sorvino, and Edward Herrmann. In a nutshell, Reds was a film I deeply appreciated, but only sporadically enjoyed, and as a result, I never felt the slightest inclination to watch it again until this 40th anniversary Blu-ray showed up on my doorstep. My previous ambivalence aside, I looked forward to revisiting the movie and seeing if the passage of time and my greater maturity and life experience might change my feelings about it.

They didn't. Reds remains cinematically impressive - Beatty certainly deserved his Best Director Oscar and some might say the film should have won Best Picture over Chariots of Fire - but the intimate story struggles to sustain itself over such a lengthy running time. John and Louise are interesting, but hardly enthralling people who never inspire the ardor and affection we feel for most classic movie couples. It's not that Beatty and Keaton, who play Reed and Bryant, don't have chemistry. (The two were romantically involved off screen at the time, although the strain of working together reportedly destroyed their relationship.) Rather their respective characters (who bicker and battle to excess) care more about politics, social change, and personal evolution and fulfillment than each other, which makes spending three-plus hours in their company more than a little tedious. Reds has a soul, but like the Tin Man in The Wizard of Oz, its creator forgot to give it a heart. 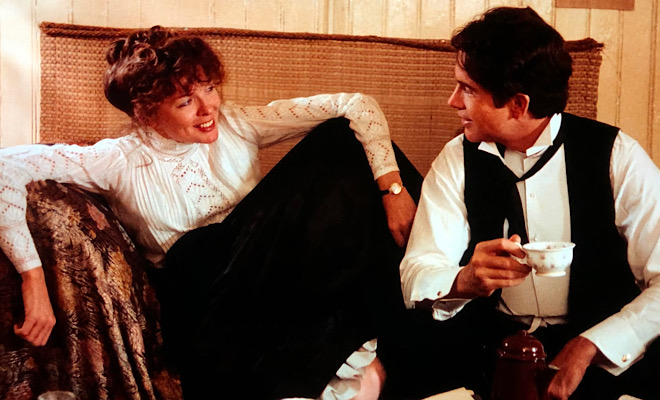 The film is also hard to follow at times because Beatty assumes we know more than we do about Reed and Bryant and the turbulent era in which they lived. He depicts historical events - battles, symposiums, council meetings - but doesn't sufficiently put them in context, convey their relevance, or tie them together. As a result, despite its lyrical presentation, Reds can feel choppy and episodic, and because it's often so cerebral, it never delivers the visceral gut punches or palpable emotional pangs we crave.

Some of the best moments come courtesy of dozens of real-life "witnesses" who knew Reed and Bryant personally. These very old men and women - all with fascinating faces - relate both charming memories and critical assessments of the couple, often lacing their remarks with pointed quips and colorful language. (Their names are listed in the credits, but sadly they are not identified on screen.) Beatty liberally sprinkles their recollections throughout Reds, lending the film a refreshing quasi-documentary feel. Some of the vignettes are more entertaining than the drama, though they substantially pad the movie's already excessive length.

Many actors struggle to direct themselves, but Beatty, despite the pressures of helming a massive intercontinental epic, files a natural, sincere performance that earned him an Oscar nod. Though at 41, he's a tad too old to portray Reed, who died at age 32, Beatty projects a boyish fervor that helps bridge the gap. He also succeeds in humanizing a subversive figure, but can't help transforming Reed into a dashing Hollywood hero. (He is Warren Beatty, after all, and never really lets us forget it.)

Keaton, in her first role after ending her long, fruitful association with Woody Allen, sinks her teeth into the not always likable Louise and contributes a finely etched portrayal of a complex, often exasperating woman who loved her illustrious husband but hated living in his shadow. (At times, her neuroses remind us of the quirky characters Keaton played in Allen's films.) She, too, nabbed an Oscar nomination, as did Nicholson for his surprisingly restrained supporting work as a young Eugene O'Neill, who falls deeply in love with Louise prior to her marriage. Reds marked Nicholson's first film after The Shining, and the actor seems to relish the sedate role, admirably suppressing all of his maniacal Jack-isms. 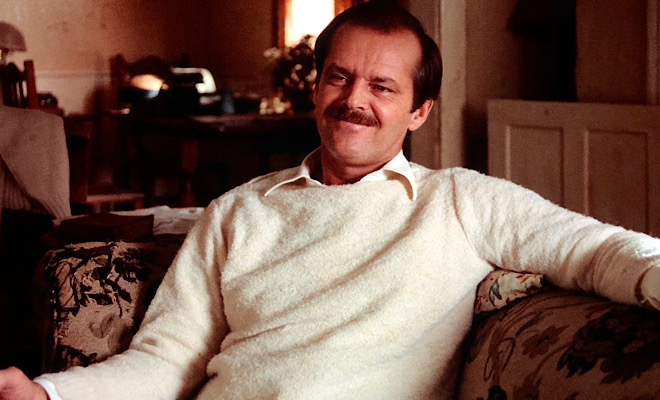 Stapleton won the Oscar for Best Supporting Actress for her down-to-earth turn as Emma Goldman, another noted activist who espoused anarchist philosophy and fought for social change. With her spunk and candor, Stapleton enlivens every scene in which she appears; it's just a shame there aren't more of them. In even briefer roles, Hackman, Herrmann, Sorvino, Nicolas Coster, William Daniels, M. Emmet Walsh, George Plimpton, Jerzy Kosinski, and two stellar Golden Age actors - Ian Wolfe and Bessie Love - all make notable impressions, and their pop-up appearances perk up the narrative when it begins to sag.

In all, Reds received a whopping 12 Oscar nominations, the most of any 1981 film. Acting aside, the movie's technical merits, gorgeous production design, and meticulous craftsmanship make this epic a must-see, but all of its stunning components don't add up to a particularly satisfying whole. Reds has held up well over the past four decades, but lacks the resonance to both make it memorable and make us eager to return to it over and over again. After three hours and fifteen minutes, Beatty's masterwork captures our respect, but for many of us, not our fancy. 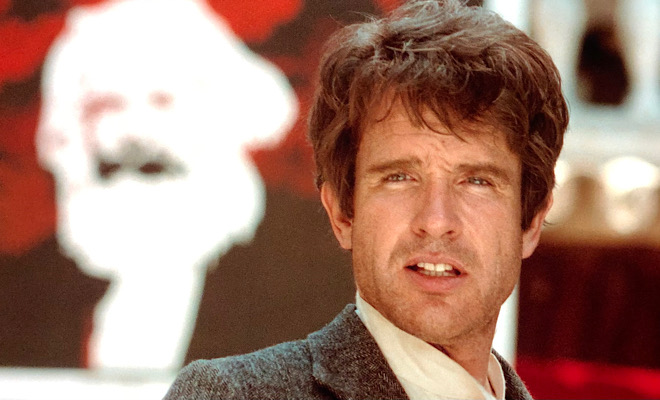 Vital Disc Stats: The Blu-ray
The remastered version of Reds arrives on Blu-ray in a two-disc set packaged in a standard case inside a sleeve. The main feature resides on one disc and the supplements are housed on the other. A leaflet containing the digital copy code is tucked inside the front cover. Video codec is 1080p/AVC MPEG-4 and default audio is Dolby TrueHD 5.1. Once the disc is inserted into the player, the static menu without music immediately pops up; no previews or promos precede it.

Warren Beatty himself supervised this brand new restoration of Reds, which, according to Paramount's press release, "was restored and remastered from the original negative in 4K with High Dynamic Range using a vintage print from the Paramount archives as a reference, which was approved by Academy Award-winning cinematographer Vittorio Storaro." I don't own and haven't seen any previous home video versions of Reds, but can't imagine this epic drama looking more vibrant, detailed, and organic than it does here. No longer spread across two discs, the film boasts a 1080p/AVC MPEG-4 transfer that itself is an upgrade from the 2006 MPEG-2 encode. The lovely grain structure lends the picture a palpable film-like feel that honors and complements Storaro's beautiful photography. A warm glow often bathes the image and enhances the air of nostalgia swirling about the historical story.

Excellent clarity and contrast, strong black levels, bright and stable whites, a natural color palette, and solid shadow delineation all distinguish this great-looking transfer. Costume fabrics, such as wool and tweed jackets and knit sweaters, exhibit plenty of texture, background details are easy to discern, and fine elements like flakes of dandruff and stray hairs on the sport coat of one of the witnesses are wonderfully crisp. Close-ups highlight facial stubble, scraggly beards, and the witnesses' cavernous wrinkles, as well as the glamor of Keaton and Beatty, and not a single nick, mark, or errant scratch dot the spotless print.

Low light occasionally lends some scenes a slight gauzy look and a bit of softness creeps in now and then, but those are minor quibbles. Considering the range of locations and epic nature of Reds, the consistency and overall quality of this transfer is impressive indeed, and fans of the film will be thrilled with this 40th anniversary rendering.

Lossless audio at last comes to Reds in the form of a newly remastered Dolby TrueHD 5.1 track. (The disc also includes a remastered Dolby Digital mono track.) As per usual with Dolby TrueHD, my normal listening level needed a substantial boost to achieve the desired fidelity, but once I tweaked the volume, the track supplied clear, well-modulated, if unspectacular sound. Reds has always lacked the majestic, robust soundscape that distinguishes most epics, so don't expect much surround activity. (I noticed some faint bleeding during the beach scene and more pronounced multi-channel effects as the music swelled in the moments just prior to the intermission.)

Though decidedly front-heavy, the mix does feature pronounced stereo separation from time to time that lends the track a more expansive feel. Subtle atmospherics like chirping birds and rain are distinct, some nice bursts of bass punctuate the war scenes toward the end of the film, and a wide dynamic scale embraces the melodic strains of the love theme written by Stephen Sondheim. (Though Sondheim receives sole credit for the Reds score - one of only two films for which he supplied the music [the other was 1974's Stavisky] - he's only responsible for the recurring "Goodbye for Now" theme. Dave Grusin wrote the rest of the movie's music.) The dialogue can be a little muffled at times, but most of the conversations are easy to comprehend, and no age-related hiss, pops, or crackle or any distortion intrude.

No new extras are included, but all the supplemental material is now housed on its own separate disc. For a complete review of the seven-part, 75-minute "Witness to Reds" documentary, click here.

Reds didn't captivate me when I first saw the film back in 1981, and despite a marvelous restoration supervised by Beatty himself and remastered audio, this epic historical drama failed to captivate me 40 years later. Beatty's ambitious chronicle of the life of American Communist sympathizer John Reed and his love affair with writer Louise Bryant is often impressive and beautifully mounted, but its excessive length and narrative inertia make the film a difficult slog. If you're a fan of this lauded movie that won Beatty a Best Director Oscar, you'll definitely want to pick up this definitive Blu-ray edition that faithfully and lovingly honors this admirable, if not beloved, achievement. Recommended.