The Polar Bear is the Arctic's biggest predator. But what happens to the "Ice Bear" when there's no ice? Featuring breathtaking 3D cinematography shot over 12 months in the Canadian Arctic and capturing rarely-seen behavior, Polar Bears 3D: Ice Bear is an enthralling and captivating look at their changing world.

The imposing and majestic bear is a creature that immediately attracts us as both a ferocious beast that could potentially kill a person with a single swing of its gigantic paw and an adorable, cuddly animal that we instantly want to pet. It's a funny thing about humans; we are often fascinated and enchanted by the things with the potential to harm us. We fear the beasts of the wild but are also curious about them. Whereas other animals turn and run away, we, perhaps stupidly, want to investigate, want to learn more and discover what makes it tick in such a way as to scare us. Granted, this naturally inquisitive aspect of our species has largely worked to our evolutionary benefit. But for the animals, that for the most part want to be left alone, our curiosity of them has caused more harm than service.

And so, this is where the documentary 'Polar Bears' comes in, by Adam Ravetch and Sarah Robertson of Arctic Bear Productions ('Arctic Tale,' 'To the Arctic'). Like their other films, this is a well-intentioned piece on the carnivorous Arctic animals with tidbits about the growing ecological changes which are starting to create serious damage to the species' survival. The difference between this and their previous work, however, is that the message is not as heavy-handed or continuously pressed upon the audiences. Rather, we simply follow one adolescent bear through his journey from arctic ice to land in search of food to live the summer months. It's while on this voyage, we slowly learn of the changes occurring around him and its impact on his survival forcing him to go against instinct.

With stunning photography of this desolate region just north of Canada, the film ironically shows that amid the immense beauty surrounding the polar bear, the harsh land is increasing its brutality, making it more difficult with each season to endure. Affectionately called Ice Bear, our friend must swim further than ever before on this particular year because the summer has grown longer, meaning the season arrives sooner and ends much later. Because his preferred hunting season is during the winter, which is when seals are on average more abundant, Ice Bear must try to eat twice as much during those shorter months and essentially starve the rest of the year. Sadly, starvation leads to desperation, such as climbing hillsides for birds, a sight never seen before, or hunting the dangerous walrus. 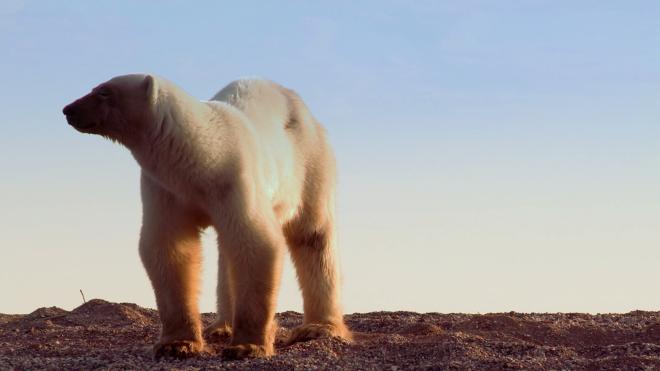 Funnily, Ice Bear comes across the same mother-cub family featured in 'To the Arctic' while on his exhausting quest for food, showing a bear desire and need for companionship. I like that during his journey we learn more of the damaging effects caused by climate change through his struggle to survival gruelingly long summers. At the same time, it's a message delivered to give us pause and think rather feeling like a pedagogical, guilt-inducing lesson. The most curious aspect of 'Polar Bears' is the mention of seeing these beautiful creatures used as tourist attractions, people coming close and personal with the animals because again, we are both fascinated and scared of them. But no matter our fascination, too many of us do little to save them; we will go out of our way to see them in person, yet don't bother to help in preserving their homes.

The bears make their long journey to Blu-ray shores with a good but also somewhat average 1080p/MVC MPEG-4 encode (1.78:1). A few scenes appear to be the result of artificial sharpening, though thankfully, it's not to the extent of completely ruining the picture. Very mild banding rears its ugly head in some underwater sequences as well. Contrast and brightness are well balanced with crisp whites and strong blacks, but there a few poorly-resolved moments. Colors are cleanly-rendered and bold while details are sharp and distinct for the most part. The 3D image is sadly hit or miss, some show incredible depth and dimensionality while others are noticeably flat. The best moments make up for the weaker ones, but not enough sadly to warrant a higher score.

The best part of the Blu-ray is definitely the 5.1 DTS-HD High Resolution soundtrack, which surprisingly is full of activity of arctic wildlife. It's mostly a front-heavy presentation, however, with many animal sounds contained within the three front channels. Nevertheless, off-screen effects are delivered convincingly with good separation and balance. Dynamic range is detailed with clean highs and excellent mids, allowing for splendid clarity in the noises of the various animals as well as in the score. Low bass is adequate with great response to on-screen action while the narrator's voice is well-prioritized and distinct. The music bleeds into the surrounds with amusing effectiveness, keeping viewers engaged and immersed.

An entertaining nature doc with valuable lessons on preserving our natural environment, 'Polar Bears 3D: Ice Bear' is nice tale of one adolescent bear's journey through the long, grueling summer months. The Blu-ray arrives with good picture quality and a slightly better audio presentation. A very small assortment of special features don't make much of a difference, but enthusiasts hungry for more 3D material might be tempted to buy.

Sale Price 7.66
Buy Now
3rd Party 7.66
In Stock.
See what people are saying about this story or others
See Comments in Forum
Previous Next
Pre-Orders
Tomorrow's latest releases