Immerse yourself deep into the ocean in search of the most dangerous predators in our seas. Unveil the mysteries of these fascinating and skilled hunters. Razor-sharp teeth and lightning-fast reactions rule in this unforgiving environment. Discover the facts behind the myths and legends about sharks, barracudas and moray eels. Shot in real stereoscopic 3D, this documentary introduces you to the Kings of the Sea in an unprecedented way.

Let's admit it. Of all the amazing fish critters which reside in every part of Earth's immensely remarkable ocean, the ones we fear and think frightening even at a distance are also the ones which fascinate us. And of those, the shark is arguably the one that intrigues us the most, the creature which has captured our imagination for centuries. Interestingly, these incredible sea marvels continue to terrify us despite our growing understanding of them which proves otherwise. There is something instinctual in us that makes us scared of them, respect them in awesome admiration though they kill less people per year than almost any other animal on the planet. There is good reason, however, for why we should be afraid of them: Sharks are quite literally the perfect predator.

As pointed out in the mostly educational documentary 'Ocean Predators,' the species of today's most dangerous marine carnivore has been hunting the world's oceans from as far back as 420 million years ago. And through that time, it has evolved very little although there are over 470 known species, making it the perfect killing machine, perfectly adapted for its environment. Along with it looking like a fearsome monster, this is one significant reason for admiring and respecting the creature. In barely a fraction of that time, homo sapiens have gone through numerous evolutionary changes for survival while this beautiful animal has had little need to. Our instinctual fear of them probably comes from some deeply-rooted, innate knowledge of their predatory prowess.

Anyhow, the movie from documentary filmmakers and long-time collaborators Benjamin Eicher, Timo Joh. Mayer is not only to revere these wonderfully astonishing animals but also to inform audiences of what makes them special and unique. In the guise of counting down the top five most dangerous members of the family, the doc explains the difference between the reef shark, the hammerhead shark, the tiger shark, the bull shark and finally, the great white shark. It's easy to guess who wins the contest, but the filmmakers do a great job in keeping the lesson entertaining while also visiting a few others oceanic hunters, like the barracuda, moray eels and the friendly yet intimidating whale shark. There's a great deal of information to glean, such as a few tidbits on their anatomy and certain distinctive abilities which make them excellent killers. 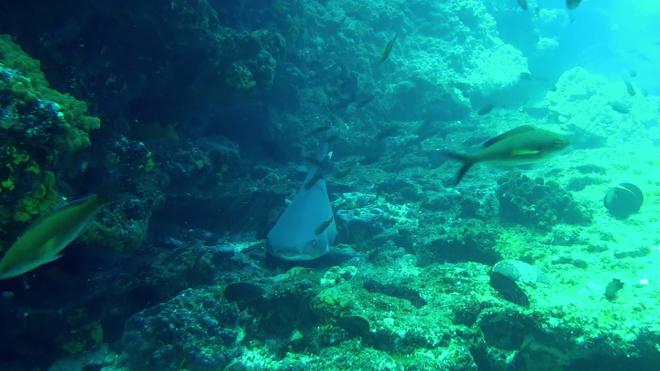 Of course, this wouldn't be much of a nature documentary without at least a few comments about how their habitats are in constant dangers. Finning, a rather disgusting habit done purely for human consumption and satisfaction, is one particularly troubling issue, and the increased use of trawling, which involves pulling a fishing net through deep waters, is also causing significant damage to the number of sharks in the ocean. Narrator Glen McCready thankfully doesn't make these concerns the central focus, but he doesn't shy away from making them known to viewers without also drilling it into their heads. However, there are times when the film does grow a bit dull and McCready's voice monotonous. Nevertheless, 'Ocean Predators' is informative while also pleasantly entertaining.

Universal Studios Home Entertainment brings 'Ocean Predators' to Blu-ray 3D inside an eco-elite case with a glossy slipcover. The Region Free, BD25 disc commences with a skippable trailer before switching to an animated 3D menu screen where viewers can also choose a 2D version.

The predators languidly swim their way to Blu-ray 3D with an excellent 1080p/MVC MPEG-4 encode that also sadly comes with its share of minor drawbacks. Most notably, the video shows quite a bit of banding, particularly when the camera points up towards the sun, and a good amount of aliasing in the sharper edges of coral walls. On the whole, however, fine object details and textures are very well-defined with mostly outstanding clarity of the tiny rocks and the individual, colorful designs of our oceanic friends. Contrast and brightness are terrifically well-balanced with rich, deep blacks and strong shadow delineation. Colors are bold and accurate throughout as well.

Natively shot in 3D and presented in its original 1.78:1 aspect ratio, the high-def transfer's most impressive aspect is, of course, the exceptional depth. In spite of a couple rather flat instances, the majority of the 3D image is consistent with a wonderful sense of space and distance with objects in the background reaching into the screen. A few fish and some random debris in the foreground add to the experience with excellent separation between each, though at times they can also seem like simple flat cutouts. The moray eels are photogenic curiosities which penetrate the screen and providing viewers with some pleasing pop-out effects. Overall, it doesn't rank as one of the best in 3D nature docs, but it's quite good.

Unfortunately, despite being offered to the audio sharks in DTS-HD MA, the stereo soundtrack for an otherwise enjoyable ocean documentary is rather disappointing. First, the lack of rear activity is surprisingly noteworthy because the stunningly beautiful images really deserve a more immersive experience. Second, the front-heavy presentation also feels oddly thin and constricted, almost as if the original design has lots more to offer but contained in an aquarium against its will. This makes for a flat and uniform dynamic range that lacks bass, though the ethereal music of Nassouh Hichri is detailed and has a bit of weight in the orchestration. Although the narration is well-prioritized in the center, the voice of Glen McCready is also overpowering and distractingly bright.

Informative yet also pleasantly entertaining, 'Ocean Predators – 3D' looks at the top five killers of the shark family while educational viewers on the different species and their anatomy. The Blu-ray arrives with very good picture quality but rather disappointing audio. Lacking special features, the overall package will intrigue only enthusiasts hungry for more 3D material.

Sale Price 9.88
Buy Now
3rd Party 5.89
In Stock.
See what people are saying about this story or others
See Comments in Forum
Previous Next
Pre-Orders
Tomorrow's latest releases