The Incredible Hulk: The Complete Series

While researching the untapped potential of the human body, Doctor David Banner accidentally exposed himself to a massive dose of Gamma Radiation. Now when he becomes angry or emotionally unstable, he transforms into The Incredible Hulk. Starring Bill Bixby, Jack Colvin, with Lou Ferrigno, this series was Marvel’s first major television event and set the standard for all future Hulk live-action appearances. The Complete Series gathers up all 80 episodes and the first two pilot television films into a nice neat 19-disc package offering solid 1080p transfers with excellent audio mixes and a nice smattering of archival bonus features. If you’re a fan looking to upgrade your old DVD sets - don’t let that inner rage consume you! Recommended.

After being unable to prevent the death of his wife in a car accident, Dr. David Banner (Bill Bixby) dedicated himself to finding a way to tap the extraordinary strength reserve in every human. After accidentally blasting himself with an extreme dose of Gamma Radiation, David transforms into a massive green-colored creature of unchecked rage - The Incredible Hulk (Lou Ferrigno with some vocals by Ted Cassidy and Charles Napier). Stalked by investigative reporter Jack McGee (Jack Colvin), David travels the world trying to find some way to prevent the monster inside him from ever coming out again. 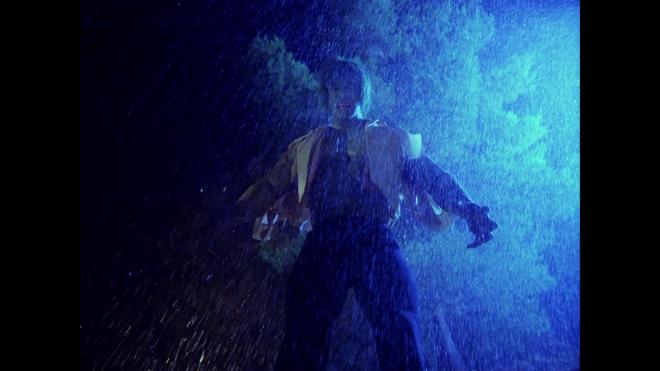 I love The Incredible Hulk. I’ve been watching the episodes and made-for-television sequel movies ever since I was four years old and my mom taped the movies for me. Thankfully extended play tapes were a thing because I had the Hulk movies, an episode or two of the show, and a recording of The Super Inframan all on a single VHS. Periodically reruns of the old episodes would show on TV and my local Mom & Pop rental shop had a couple of tapes in their collection. When the DVDs came out I dutifully picked each set up as fast as they hit store shelves. I love it. It’s a goofy fun time that’s wonderfully dated but offered up some great adventures.

This isn’t to say the show was perfect. As big a fan I am of the show, it wasn’t always the greatest show on television. Part of the issue is the basic premise. David Banner travels from town to town helping the downtrodden folks he encounters whether that be a bankrupt mountain town, a drug-addicted suicidal rock star, or a hearing-impaired bodybuilder. The stories change from episode to episode, but the basic plot and structure remain the same. David arrives in town, meets a nice person, gets picked on, Hulks out, plot moves forward to the climax where he Hulks out again and the situation resolves itself for the better. For all of David’s travels, the story never actually went anywhere. Occasionally Jack Colvin’s McGee would get damn close to revealing the true identity of the Hulk, but those episodes were few and far between.

Repetition aside, there’s a lot of fun to be had throughout the five seasons of The Incredible Hulk. Early on the show didn’t know how long it was going to last so it relied heavily on stock footage reusing trims and edits from flicks like Airport 1975 and Steven Spielberg’s breakout Duel. Once the show became a hit it gained a bigger production budget moving to actual locations instead of the painfully obvious recycled sets of the studio backlot. Episodes like Prometheus Part 1and 2, Mystery Man Part 1 and 2, Metamorphosis, The First Part 1 and 2, and King of the Beach are just a few of the really great episodes the show was allowed to grow into over each season. There was still plenty of moralizing eye-rolling episodes that played more like bad after-school specials, but overall the show was reliable entertainment. 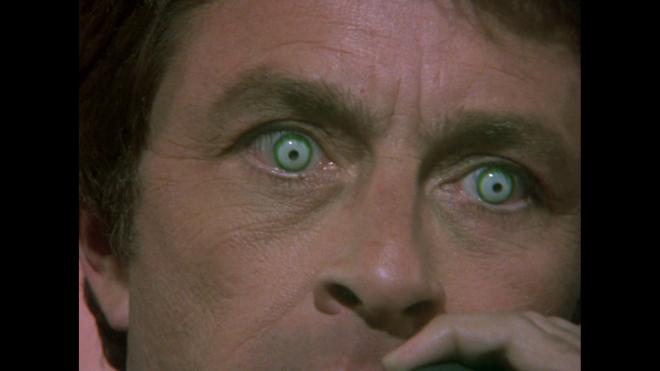 My favorite transformation of the entire series is in the Season One episode Never Give A Trucker An Even Break where David Hulks out because he doesn’t have enough change for the payphone. I tried to pull a video clip for this review but sadly YouTube gave it a stiff copyright block in most territories. You’ll just have to take my word at how amazingly entertaining it is. Most of the time it’s David being attacked by a tough or getting into an accident, but Bixby’s rage-fueled “I don’t have twenty-five cents!” is just gold.

I’ve probably watched through the entire series about five times now. Every couple of years I pull out one of the DVDs and once you pop you really can’t stop. It’s just good brainless fun. Admittedly I still wear rose-colored nostalgia glasses but what’s the point of having a favorite show you enjoy watching if you don’t get to indulge yourself with some repeat binge viewings? This Blu-ray release has given me a good reason to watch through The Incredible Hulk again. It’s been really hard not watching each episode in order and skipping around each season, but I’m always happy to see my favorite episodes again. Sadly none of the sequel television films made it to this set - hopefully someone will give those the Blu-ray upgrade they deserve because I want to see Hulk run around with Thor and Daredevil again in full HD! 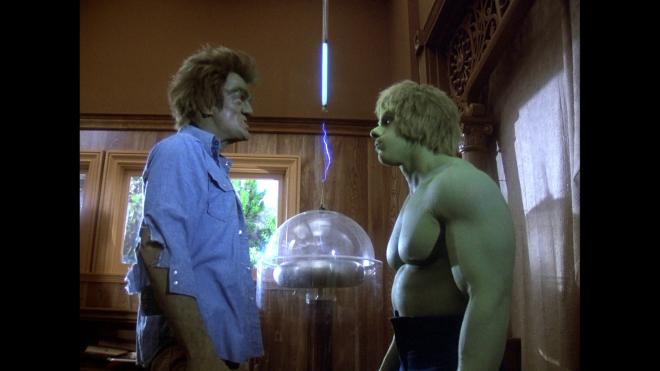 Vital Disc Stats: The Blu-ray
The Incredible Hulk finally makes it to Blu-ray in the U.S. after several EU region releases. This 19-disc set captures all 80 standard episodes with the two pilot films. Season One is a three-disc set, Season Two is a five-disc set, Season Three is a five-disc set, Season Four is a four-disc set, and the eight episodes of Season 5 are spread out over 2 discs. Each season has its own multi-disc keepcase. Each (apparently Region-Free) BD-50 disc opens to a static image main menu allowing you to play all episodes on the disc and select available bonus features. Printed on the reverse side of each case artwork is a list of the episodes on each disc. On the back of the box artwork, it lists “80 Episodes + 2 TV Movies.” Those “TV Movies” are not the sequel made-for-television films but the original pilot movie episodes. 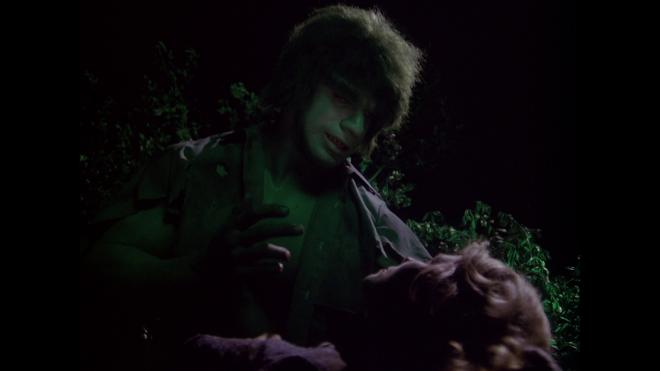 Each episode of The Incredible Hulk arrives with a pleasing 1080p 1.33:1 transfer. Thankfully they did not dig through the show to alter the image to fit modern televisions. Because I just don’t have time to watch roughly 69 hours of material all in one go - I bounced around each season sampling at least one episode per disc. Some episodes can look a tad rough in spots. Some speckling is pretty frequent throughout each season, some occasional stains pop on. The episodes that used a lot of stock footage are the most inconsistent since the footage really doesn’t match well. That said most of the time the show looks great. Details are strong giving a full appreciation of facial features, clothing textures, production design, and the Hulk makeup.

The only drawback I have comes from whenever soft-focus or diffusion was used during flashbacks, dream sequences, or to hide special effects like tow wires or support cables. Details obviously take a couple steps back in those instances, but the image as a whole takes on a crunchier texture. The opening flashback dream of the first pilot movie The Incredible Hulk is indicative of that effect. The show also heavily relied on optical zooms for dramatic effect usually during the lead-in moment ahead of an ad break and those scenes can be really rough looking with extra thick film grain. Black levels are usually pretty good maintaining a notable sense of depth to the image. Whites are generally crisp and on point, but there are several outdoor scenes with some blooming issues. 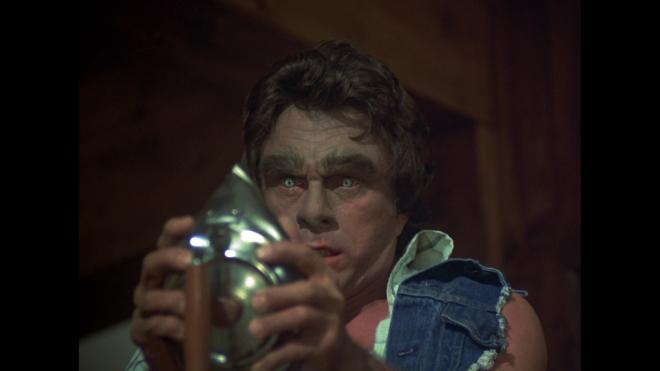 A lot of these issues are cooked in and I’d be willing to wager that a full-on restoration effort could possibly mitigate that. But, seeing as how Universal hardly marketed this release, they’re apparently content with the masters they have - which aren’t bad. They’re definitely an improvement over past home video releases.

After owning the DVDs for years, I was spotting new details I’d never noticed before like Ferrigno’s green slippers when he’s supposedly running barefoot or the couple of times it’s quite clear he’s got sneakers on. An early episode where Hulk fights a guy in a gorilla suit is especially entertaining in that regard. When the show looks good, it’s great. The image has bold colors, clean details, an organic grain structure without signs of DNR and I didn’t notice any troubling compression artifacts or unsightly edge enhancement. When the show is a little rough, it’s not the worst offense to the eyes and nothing worth getting in a huff and puff over given it has been off the air now for nearly 40 years. 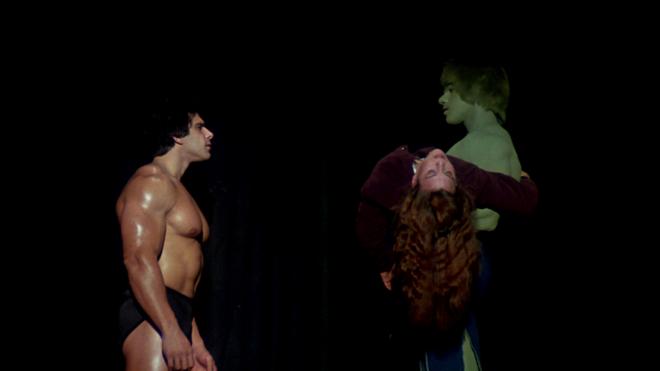 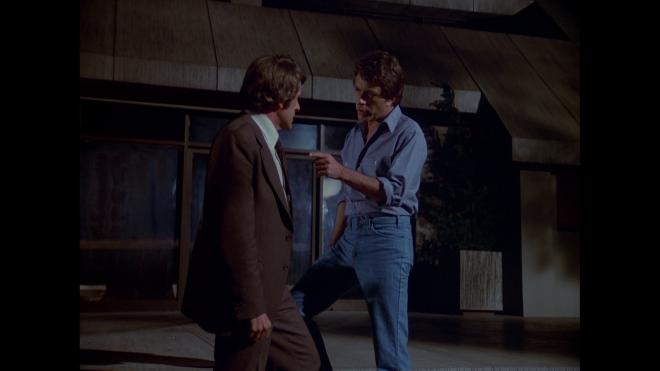 The great news for this set is that each episode of The Incredible Hulk earns a strong DTS-HD MA 2.0 track that easily outpaces the old mixes on the DVDs. For starters - I didn’t have to have my volume up nearly as high. I was really surprised at how clean the mixes sounded with solid dialog and active sound effects and scoring. Overdubs or some additional ADR work is a bit more obvious. You could always tell where they had to add extra lines of dialog to explain plot points, but now it’s a much clearer difference in the overall mix. That’s the one slightly distracting point I have with these audio tracks. Other than that each episode sounded great - that theme song still resonates and the Hulk’s grunts and growls dominate nicely. 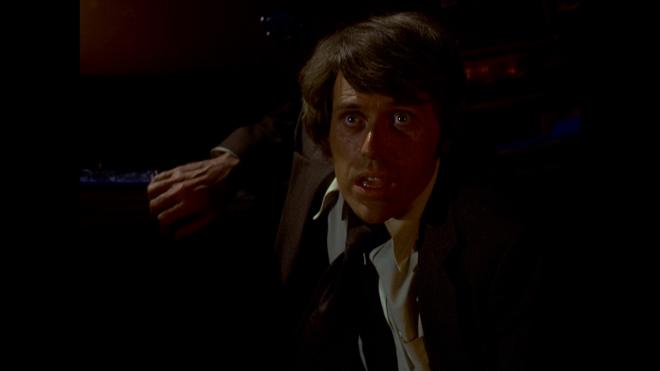 Most if not all of the bonus features found throughout this set have been ported over from the previously released DVDs. I would have loved for some new materials to hit, but since it’d been many years since I listed to any of the audio commentaries or looked at some of the supplementals it was cool to reconnect with again. The only extra missing from the DVDs is the Season Three Edward Norton hosted promotional piece about the film The Incredible Hulk - it was a total puff piece and not a big loss for this set at all.

Season One: Disc One 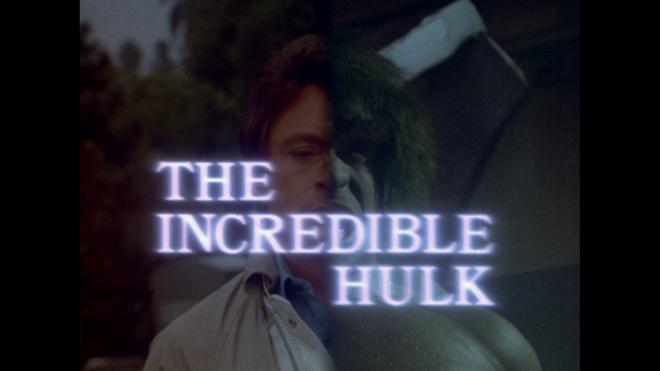 The Incredible Hulk is a great show. One of my favorites since I was a kid, it has entertained me for countless hours over the last 35 years since I was first introduced to it. Bill Bixby’s David Banner was perfect every-man casting with Lou Ferrigno being the true live-action embodiment of The Hulk. While the show could be a little up or down one episode to the next, by and large, it remained an entertaining adventure from one season to the next.

Universal Home Entertainment brings the entire original run of The Incredible Hulk to Blu-ray in a fittingly massive 19-disc Blu-ray set. Each episode runs a pleasing 1080p upgrade easily surpassing the old DVDs even if a full restoration could have done this show wonders. The new DTS-HD MA 2.0 audio tracks are universally excellent. Bonus features have been recycled from the old discs with nothing new in the stew, but the Audio Commentaries are well worth listening to. The only way this set could have been better is if Universal had included the sequel made-for-television movies. The “2 TV Movies” listed on the artwork is misleading since those are just the feature-length TV pilot film episodes. At the end of the day, this is a set I'm ultimately very happy I upgraded for. Recommended.