Tim Blake Nelson is a simple man who can’t outrun his dark past in the thrilling new Western, Old Henry. Written and directed by Potsy Ponciroli, the film is a tribute to the genre playing to the strengths of a genuine classic Western with interestingly complex characters occupying a lean and to-the-point plot. This excellent film arrives on a single-disc Blu-ray from Shout! Factory offering a pleasing transfer and a terrific audio mix. Western fans will not want to miss this one - Highly Recommended.

Homesteader Henry (Tim Blake Nelson) has been living west into the Oklahoma territory as long back as when it was still Indian land. He married, had a son Wyatt (Gavin Lewis), and lived in relative peace. Now a widower, he must raise his head-strong son alone. When they take in a wounded stranger (Scott Haze), a man by the name of Ketchum (Stephen Dorff) identifying himself as a lawman and his two deputies arrive on Henry’s land. They claim the man they have with them is an outlaw bank robber, but with a few secrets of his own - Henry knows an outlaw when he sees one. When Ketchum and his hired guns lay siege on the farm, Henry’s dark past will come to violent light.

I don’t know if you’ve noticed, but Westerns aren’t made that often and when they are they’re usually uneventful direct-to-video cast-offs. Westerns were once the most prevalent film genre in theaters for decades made by filmmakers the world over. Big budget or small, literally dozens of Westerns were made every year. After the early 90s one-two punch of Best Picture winners Dances With Wolves and Unforgiven, the genre has faded out. Occasionally there’s a new great western that comes along, but they’re relatively few and far between. Even when fans are treated to a new one we get a “modernized-Western” like Let Him Go or a genre hybrid like Serenity or The Mandalorian series on Disney+. Genuine true to form Westerns are fairly rare. Just as rare, is a true Western that’s actually great and Old Henry fits that bill. I’ve watched this film a few times now and I’m kicking my ass every day that I didn’t go see this in the theater when I had a brief shot to do so.

At its core, Old Henry is a siege film. The good guys are stuck in a single small location with rapidly dwindling supplies surrounded by bandits. They have to make every bullet count - and Tim Blake Nelson’s icy Henry knows how to make them count. The Hero With A History is often a silly trope but writer/director Potsy Ponciroli uses it wisely. We know Henry is a man with a past because he never directly answers his son’s many questions and has a coat of battle scars stitched all over his back. It could have been left at that - Henry is a badass. But Ponciroli goes one level deeper with the character allowing this reveal to not only be a major character beat but also a very exciting revelation. Thankfully the film doesn't completely lean on this reveal in such a way that's a one-trick pony. The film would still have been great without it, but when the past is revealed it's a nice accent to an already tight script. 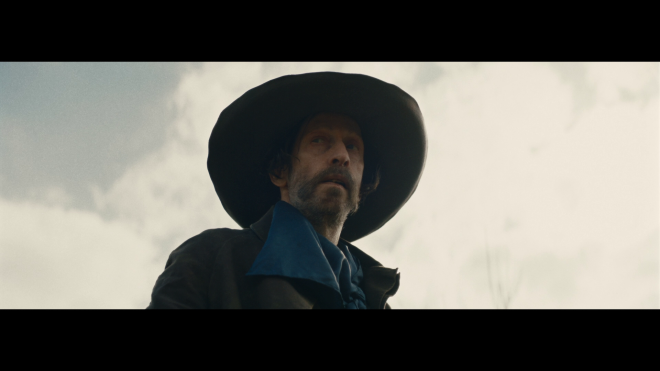 But an interesting hero isn’t anything without a great villain - and Stephen Dorff once again delivers in that department. Dorff may not be signing onto any comic book movies anytime soon, but that’s okay if he keeps finding meaty roles like this one. Scott Haze holds his own as the wounded man of mystery. Of the supporting cast, Gavin Lewis was another excellent choice as he plays headstrong without becoming obnoxious or irritating. You feel his frustration with his life but then you soon learn why he was raised how and where he was. Trace Adkins drops by long enough to set some character mood and deliver the perfect line for the trailer. 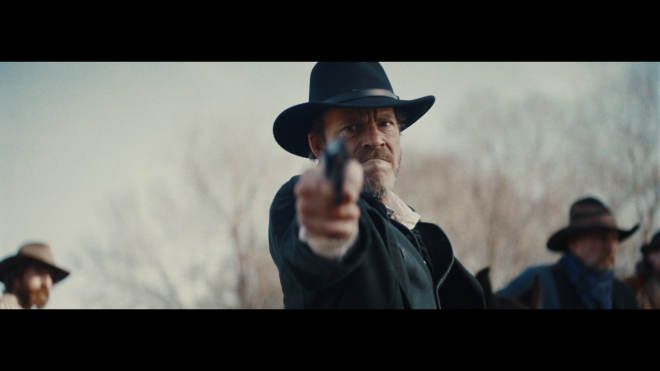 I’ve had Old Henry on my deck to review for a while. Other projects kept coming and pushed it around the queue so this is admittedly long overdue. That said, I loved this movie and as I mentioned I've watched it a few times now and I enjoy it more each time I sit down with it. I guess I needed a great new western to dig into. After his time on The Homesman and his hilariously entertaining turn in The Ballad of Buster Scruggs as a song and dance cowboy and now this cool as the grave turn, Tim Blake Nelson needs to be doing more westerns. He’s always been a versatile character actor, but damn, this is a suit that fits the actor far better than I’d expected.

Vital Disc Stats: The Blu-ray
Shout Factory brings Old Henry to Blu-ray in a single disc release Pressed on a BD-50 disc, the disc is housed in a standard sturdy case with identical slipcover artwork. The disc loads to a standard menu with traditional navigation options. 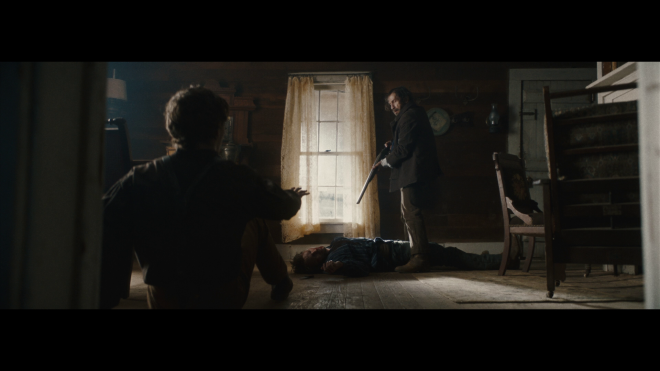 Old Henry arrives on Blu-ray with a solid 2.66:1 1080p transfer. Shot digitally, the image looks to have been given a subtle grain filter for mood and effect but thankfully it doesn’t appear too noisy or distracting. Details are strong throughout giving you a full appreciation of the simple production design, costuming, and makeup details. Colors favor the golden autumnal spectrum with rich yellows and browns, but there’s ample appreciation of blues and given all of the bloodletting - red. Black levels are deep without crush providing the image a welcome sense of depth and dimension.

Now this film is available on streaming platforms upscaled 4K with HDR and it’s decent enough, but looking around the price is awful high for an image that offers little improvement over this disc. I rented this on Amazon Prime and Vudu and experienced some notable black level differences either appearing far too dark for a key night sequence or far too light robbing the image of depth. Comparatively this Blu-ray was right on point throughout. I’d love to see what a 4K disc with HDR looks like without all of the compression issues associated with streaming, but until that day this disc is the best way to go for the money. 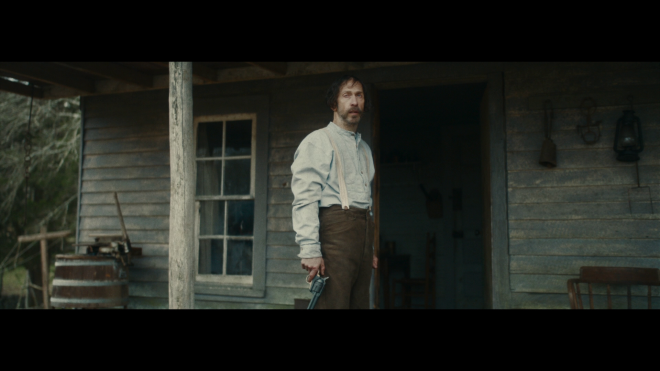 This film is also gifted an excellent DTS-HD MA 5.1 track. From the opening gunfight to the first scenes on Henry’s rough farm, there is a fully immersive auditory experience. Dialog is clean and clear - even through a variety of accent choices from the cast. Imaging is terrific using all of the channels in smart ways - it may not be a constantly guns blazing track but there’s always something keeping the channels active. Scoring by Jordan Lehning is appropriately moody and accentuates any given scene nicely without being a distraction. If you’re so inclined, it works very well with DTS Neural:X employed, opening up that sense of space and isolation but also bringing real impact when the action starts. 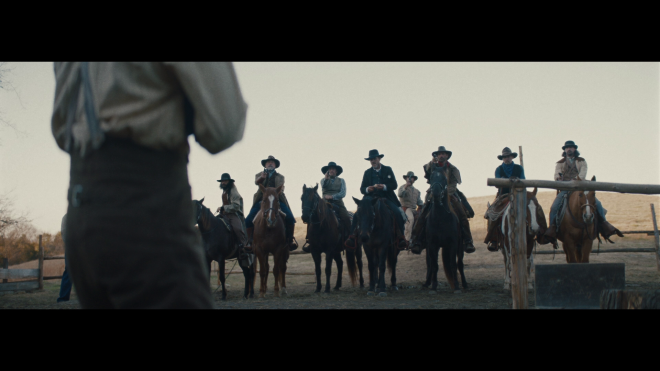 Unfortunately, bonus features are a bit of a letdown. We’re only given the briefest of behind-the-scenes looks at the film and at barely 8-minutes accounts to little more than a brief talking head piece. A commentary or a look at all the work Nelson put in to get into character. And on that note - DON’T watch this without seeing the film first. Talk about spoilers! 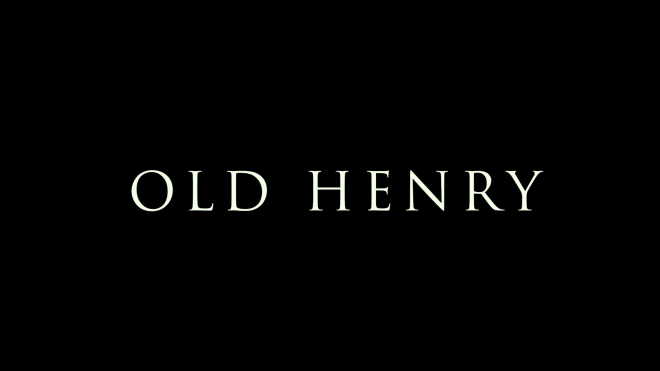 Old Henry was an unexpected delight in all the best ways. I figured given the cast that it had to have something going for it and I’d heard some positive buzz - but I was completely floored. It’s a genuine shame it didn’t score a larger theatrical run. Granted it would have hit during a pandemic during a crazy busy release frame, but again, I’m still ticked I missed it when it was only very briefly at my local theater. Tim Blake Nelson turns in the perfect anti-hero-with-a-past performance with Stephen Dorff delivering another menacing villain. It’s a hell of a flick and one of my favorites for 2021.

Old Henry arrives on Blu-ray from Shout! Factory. This single-disc release scores a solid video transfer with great audio but is light on extras. You can find this streaming on upscaled 4K with HDR10, but in all honesty, I’d give the edge to the disc in the A/V department. I keep looking out for a foreign market 4K disc release so we’ll see what happens there. Until then, if you’re a Western junky, don’t let this one pass you by. Highly Recommended.