Feeling no need to give this holiday classic a new transfer or upgrade it to modern home video technology - Paramount once again recycles the same discs for Planes, Trains, and Automobiles - SteelBook. Since the discs are the same the only difference you're getting is the fancy new SteelBook packaging. The same dodgy video presentation, the same decent but unengaging audio mix, and the same recycled bonus features. The film is a classic so if you haven't added it to the collection, this SteelBook release gives you some nice attractive packaging - if you already have the movie, then you're all set. Recommended.

"Planes, Trains, and Automobiles is a laugh-a-minute joyride, right from its goofy opening sequence in the streets of New York to its heartwarming conclusion in the suburbs of Chicago. It's a fairly standard, and even predictable, road-trip comedy with the silliness of the odd-couple tension thrown in for good measure. but in the adept hands of John Hughes, who also wrote and produced the film, it remains an endearing charmer made up mostly of situational laughs and crazy high jinks, always with lots of heart at its center.

Steve Martin stars as uptight businessman Neal Page who desperately wants to make it home in time to spend Thanksgiving with his family. His straight-faced performance is the perfect mix of a tense grump taking life very seriously and a good-natured, well-intentioned man hiding beneath several crusty layers. Along with Roxanne which was released earlier that same year, Martin reveals there is more to his talent than the usual screwball antics he's best remembered for. And strangely enough, it almost seems as if today he is better remembered as this type of character. 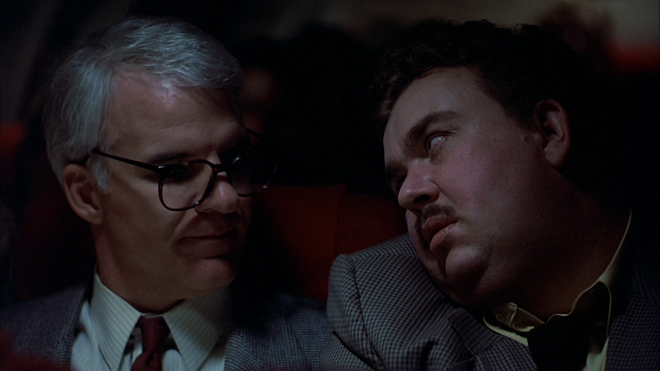 In either case, he's the ideal actor to counterbalance John Candy's obnoxiously lovable and eccentrically funny Del Griffith. From the moment we first see that face inside Neal's cab and hear that he's a traveling shower-ring salesman, we know there is something a bit off-kilter about him, but we also can't help loving the big lug. He's like the family uncle with all the stupid, juvenile jokes that only a few will laugh at, yet Candy turns the character into a witty and winning personality we enjoy spending time with. This is easily the much-loved actor's most memorable performance." 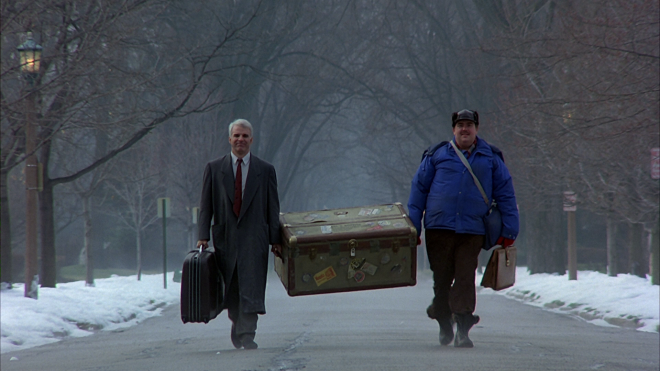 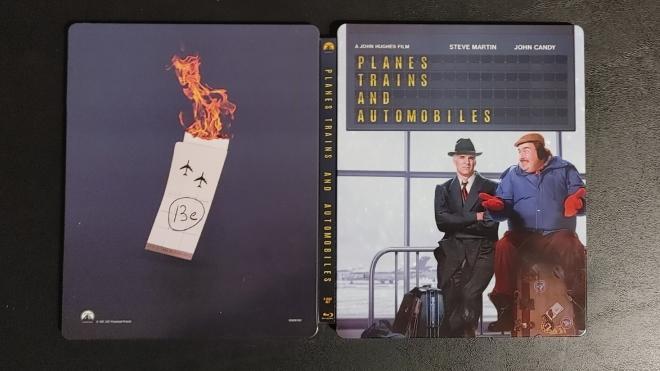 Planes, Trains, and Automobiles gets another release on Blu-ray from Paramount in a two-disc Blu-ray + DVD + Digital set. The discs inside are the exact same as what we've had for a decade now. Nothing different there. The only difference with this release is the Steelbook packaging. The included digital copy is not Movies Anywhere compatible and can only be redeemed through Paramount's portal - it will not automatically port to all subscribed services. 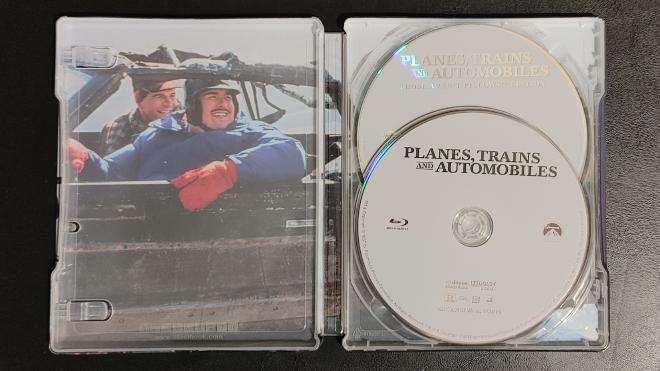 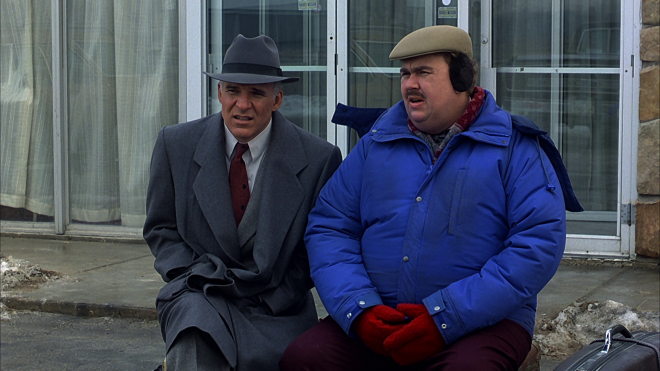 "Fine object and textural details are clean and distinct in nearly every scene. Colors appear significantly brighter and bolder, particularly in the primaries, while flesh tones look natural and appropriate to the weather conditions on display. Blacks are, for the most part, accurate and pretty deep with strong shadow delineation in low-lit interiors, though they do fluctuate a bit in a couple of scenes. Contrast seems just a tad too hot as there are signs of posterization and highlights tend to clip noticeably in some sequences. This also leads to some ringing in several spots, and there are instances of visible noise reduction where either grain freezes or faces lose the finer textures." 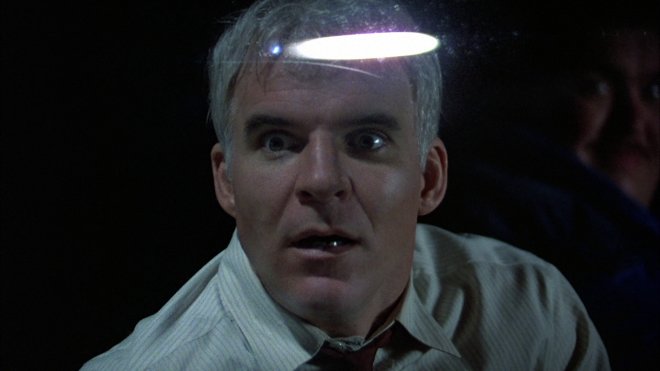 "This is understandably a front-heavy presentation by design, but the DTS-HD Master Audio soundtrack does an excellent job with precise and terrifically intelligible dialogue. The soundstage feels expansive and very spacious, displaying a well-balanced separation between the channels. Off-screen effects are quite convincing with smooth panning and directionality, and the mid-range exhibits appreciable clarity and detail during the several moments of high-pitched action. Bass is pretty much as expected for a film of this age, but it's suitable and accurate when called upon. Rear activity is, of course, quite limited, but there are some light bleeds which nicely expands the soundfield." 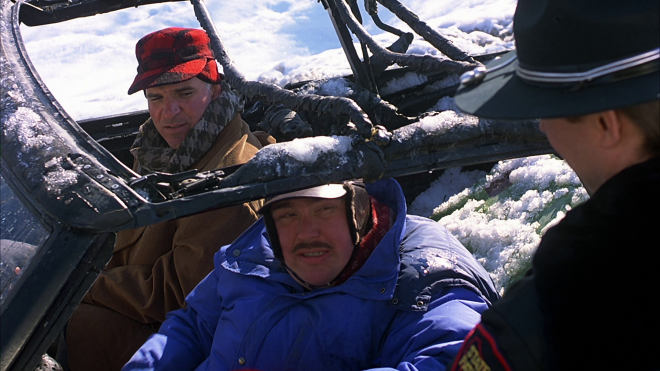 Same set of bonus features without anything new in the stew. 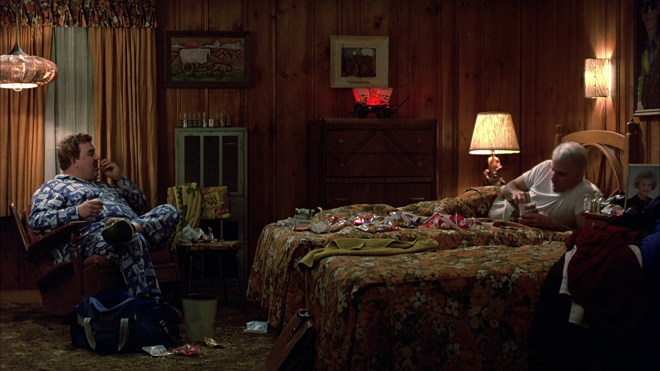 Planes, Trains, and Automobiles is a genuine comedy holiday classic. Everyone can relate to the interminable stress of traveling for the holidays. Thanks to the memorable performances from John Candy and Steve Martin, this film has left a permanent mark on the holiday season. This John Hughes family comedy may not quite be appropriate for the entire family, but it's essential viewing every Thanksgiving. Paramount Home Entertainment gives this classic film another Blu-ray release - this time recycling the same discs for a new SteelBook. Sadly the film has not been remastered or restored for a fresh new transfer that it very much deserves. Maybe next year. If you're a SteelBook collector or if you haven't added this film to your disc collection, it's worth picking up. However, if you already own any of the previous Blu-ray discs, you're all set. Recommended.