The eccentric and eclectic residents of Cicely, Alaska charmed and enchanted television viewers with the hit comedy/drama Northern Exposure - or Ausgerechnet Alaska as it’s known in Germany. The Complete Series comes to Blu-ray from Turbine Media Group in a deluxe 6-season 15-disc set. Featuring excellent 1080p transfers in the original broadcast aspect ratio and the original audio mixes with the original music selections! Topped off with deleted scenes and the Return to Cicely documentary. Highly Recommended

Some people go into massive amounts of debt to pay for their higher education. For Joel Fleischman (Rob Morrow), it was easier to let the state of Alaska pay for his medical school education in exchange for a four-year tour of service in Anchorage. The only problem, Anchorage didn’t need another doctor. But the home of the Alaskan Rivera - Cicely, Alaska is in need of a physician. Only the town isn't anything close to as advertised. As Joel desperately tries to get out of his contract, he comes to know and enjoy the eccentric group of people who call the town “home.” The best pilot and plumber Maggie (Janine Turner), the movie fanatic Ed (Darren Burrows), Radio DJ and lady magnet Chris (John Corbit), Retired astronaut Maurice (Barry Corbin), Cafe owner Holling (John Cullum), and his young wife Shelly (Cynthia Geary), and Joel's assistant Marilyn Miles (Elaine Miles) are just some of the colorful people you’ll meet in Cicely Alaska. 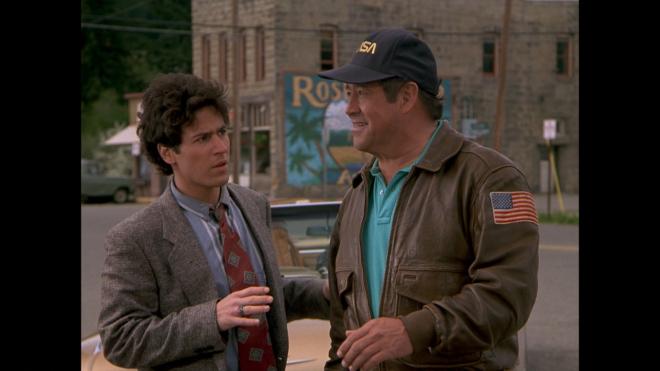 Northern Exposure is one of the most charming and entertaining shows of the late 20th century. It was groundbreaking for its time giving audiences something unique to tune into each week. It wasn’t a crass four-wall sitcom that paused for canned audience laughter. It wasn’t a sappy overt melodrama where every episode was “a very special episode” designed to abusively tug at your heartstrings. It was a pleasant mixture of genres with a goofy idiosyncratic sense of humor with some normal everyday real-life dramatics. You figure out what the show is very quickly. Episode One is the setup and framework for the show with Rob Morrow’s Joel stuck in this weird small town. Episode Two exposes the tender heart of the show when Barry Corbin’s Maurice takes issue with John Corbit’s Chris over his depictions of Walt Witman and how their situation resolves itself. Dramatic and funny without becoming tiresome or saccharine. The show would repeat this pattern of either being delightfully silly or humble and honest. 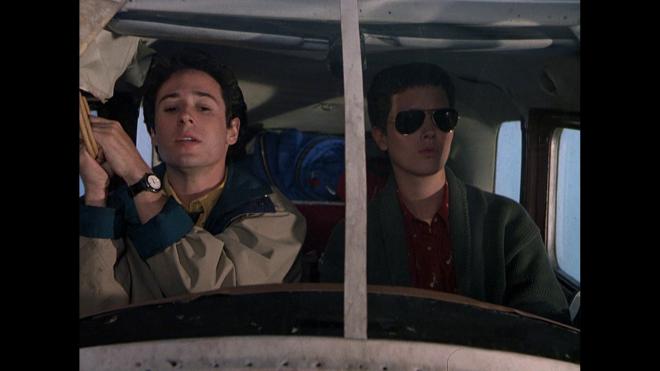 I came to Northern Exposure very late in the game. I was aware of it being a thing that people apparently watched when I was a kid, but my family wasn’t into it. It wasn’t until I met my wife that I started grabbing the DVDs from Netflix and ultimately bought that leather fur-lined satchel bag set. I wasn’t aware of the controversial music changes for those sets because I just didn’t have the original broadcast experience as a baseline. I was just in it to watch the show and I loved it - right up through most of the clunky final season.

It’s important to note that Northern Exposure was never your typical American comedy/drama television show. The first two seasons worked closer to a BBC series where it’d be a limited event series that came around each summer rather than a full 20-odd-something episode season. The smaller episode run kept things fresh while slowly expanding the show away from Joel’s fish-out-of-water character and embracing the entire cast. The show changed quite a bit when it moved from that seven and eight-episode series format to twenty-three and twenty-four-episode seasons. All of a sudden there were a lot of characters and a lot of tangential storylines that never really resolved themselves. On top of that, you had a popular cast itching to move onto other projects so characters would disappear for long stretches, or get written out entirely. 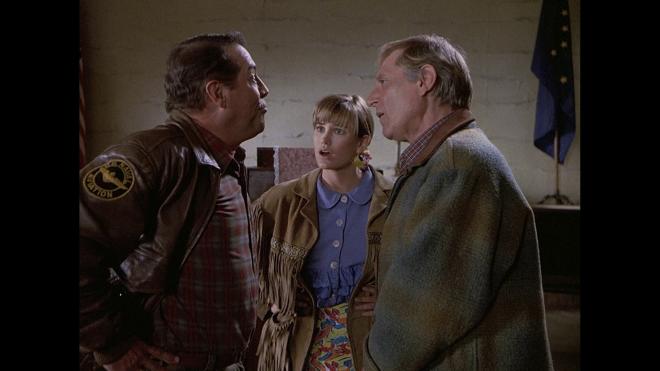 While the show had some ups and downs, it was almost always entertaining. Every show has its share of clunker episodes but for the first five seasons, Northern Exposure works brilliantly well. It’s a show that manages to highlight differences in people’s politics or social-economic status, put them together, and they actually get along. And when differences came up, they were ultimately addressed in an adult fashion that doesn’t take the issue for granted - but also doesn’t sit back and moralize. I wish it could have finished on better terms than it did - and I would have liked that revival series to have worked out, but as it stands we have five very good seasons of Northern Exposure with a clunky final season that stretched itself too thin to last. 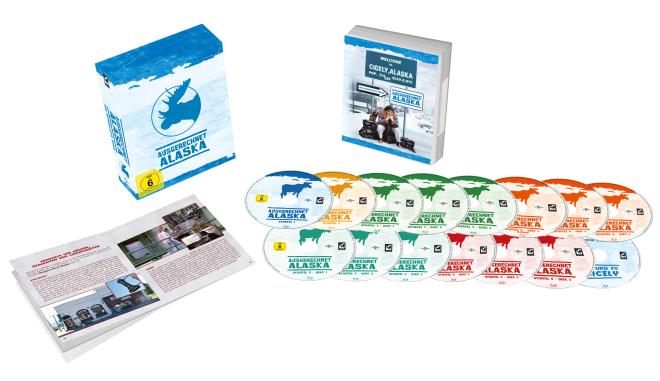 Northern Exposure gets a lovely Blu-ray release in Germany from Turbine Media Group as Ausgerechnet Alaska. All 110 episodes arrive pressed on 14 Region Free BD-50 discs with another disc dedicated to the Return to Cicely location documentary by Darren Burrows. The discs are housed in a large hard plastic multi-disc case with a hard cardboard box complete with an 80-page booklet (in German) featuring photos, cast and character information, and trivia. Each disc loads to a static image main menu with a simple navigation system letting you chose the desired language track (English or German) and jumping right into individual episodes. 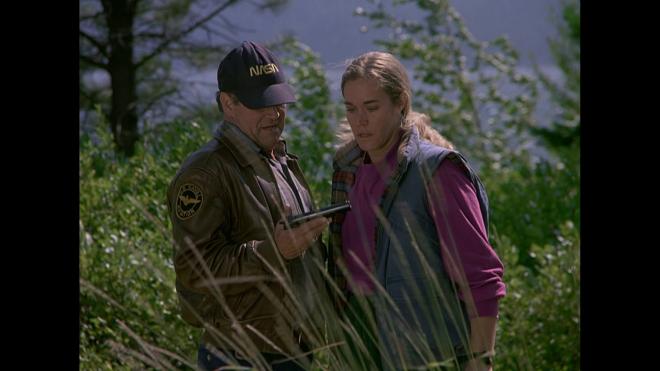 In a nice break from current trends where classics shows are being reframed to fit our modern televisions, every episode of Northern Exposure arrives with a terrific 1.33:1 1080p transfer that offers up many notable improvements over the old DVD sets. My first big takeaway was the colors. The old DVDs were overly bright and would wash out primaries. These 1080p transfers let the full spectrum reds, blues, and yellows maintain a healthy vivid presence - especially during location scenes or the wild dream sequences that pepper er the show. Film grain has a natural texture without being too noisy or intrusive and detail levels show off the beautiful scenic locations, the intricate production design and costuming, and fine textures and facial features. Black levels are also stronger and more natural giving the image an appreciable sense of depth and dimension - especially outdoor locations. All around, I’m very impressed with the transfers for each episode. 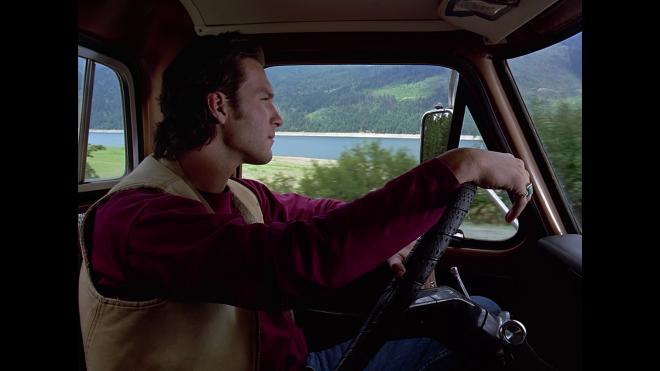 In good news for longtime fans of the show, in addition to the default German audio mixes, each episode has a robust English Dolby Digital 2.0 audio track to match - with the original music selections that have not been available here in the United States. Apparently, the rights for a lot of the music of the show is very expensive and when it came time for DVD releases to was either charge an arm and a leg or replace the music. So starting with Season Two, the music was dubbed with similar-sounding library music. That’s not the case with this German release! As I mentioned above, I came to the show late with the DVD release so I didn’t realize the difference but when you hear a real classic piece of Blues or Jazz that hasn’t been redone with a cheap soundalike track - a lot of the scenes take on a new dimension and importance. 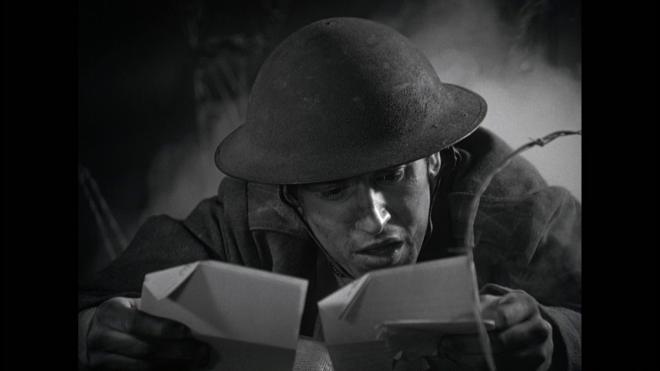 Now the thing to take note of is the pilot episode of Season One sounds a bit quiet. Of all the many episodes I skipped around each season to sample, this was the one that had some levels issues. I had to pop my volume up a bit more than normal - but none of the other episodes had that problem. It’s a small issue and far from a dealbreaker when the other 109 episodes sound just fine with clear dialog, solid ambient and atmospherics, and great music tracks to match. While these mixes may not blow your hair off, they're faithful to the show and sound great. 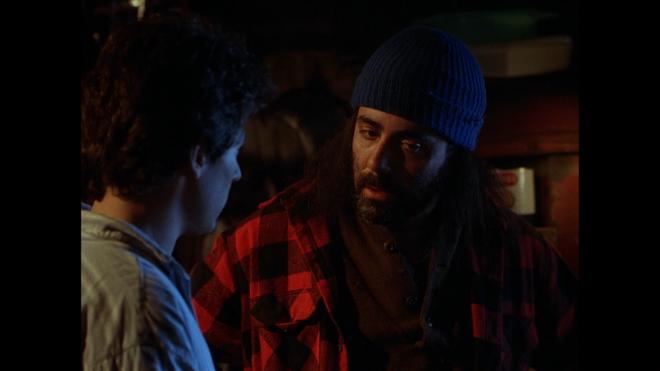 While there’s not a huge number of bonus features, each episode does have a deleted, extended scene, or outtake. These little extras start up automatically after the credits of each episode and last for only a minute or two. The meatiest bonus feature is the Return To Cicely documentary by Ed Chigliak actor (and son of character actor Billy Drago!) Darren E. Burrows. It’s a simple documentary that takes a look at all of the town and scenic locations of the show - but it’s a lot of fun and a good watch with Darren being an amiable host revisiting his favorite places and key scenes from the show.

Northern Exposure is simply one of the best shows of its era. Memorable characters, interesting stories, humor, drama - it had it all wrapped up in one oddball eccentric little package. While the show may not have gone out on a high note, the vast majority of its run was terrific stuff.

Turbine Media Group in German gives Northern Exposure - AKA - Ausgerechnet Alaska a wonderful 1080p Blu-ray release. Each episode gets a splendid transfer that offers notable visual improvements over past home video releases on top of giving fans the true experience with the original English audio tracks with the original music selections intact. Toss in some fun bonus features including a nice nostalgic look back at the various locations and you have a complete series worth adding to your collection. Highly Recommended.