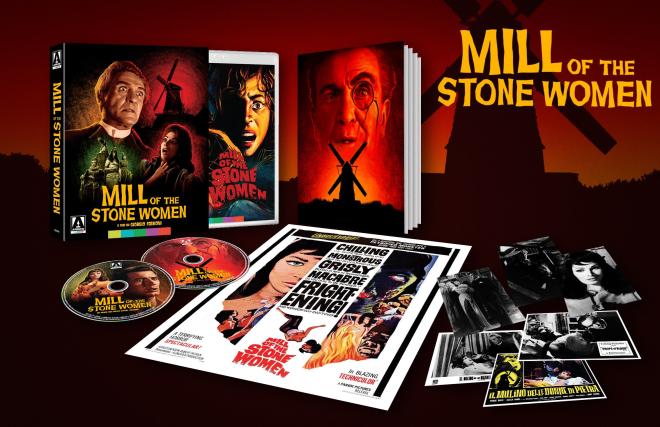 Before Black Sabbath, before I Vampiri, director Giorgio Ferroni (The Lion of Thebes, Blood for a Silver Dollar) introduced audiences to period horror Italian-style with his chilling 1960 shocker Mill of the Stone Women – a classic tale of terror redolent with the atmosphere of vintage Hammer Horror.

Young art student Hans von Arnam (Pierre Brice, Night of the Damned) arrives by barge at an old mill to write a monograph about its celebrated sculptures of women in the throes of death and torture, maintained and curated by the mill’s owner, the hermetic Professor Wahl (Herbert Böhme, Secret of the Red Orchid). But when Hans encounters the professor’s beautiful and mysterious daughter Elfi (Scilla Gabel, Modesty Blaise), his own fate becomes inexorably bound up with hers, and with the shocking secret that lies at the heart of the so-called Mill of the Stone Women.

The first Italian horror film to be shot in color, Mill of the Stone Women prefigured a raft of other spaghetti nightmares, including the work of maestros Mario Bava and Dario Argento. Arrow Video is proud to present this brand-new restoration of one of the foundational titles of Italian horror.

–     New 2K restoration from the original negative by Arrow Films

–     Illustrated collector’s booklet featuring new writing on the film by Roberto Curti, an in-depth comparison of the different versions by Brad Stevens, and a selection of contemporary reviews

–     New audio commentary by Tim Lucas, author of Mario Bava: All the Colors of the Dark

–     Mill of the Stone Women & The Gothic Body, a new visual essay on the trope of the wax/statue woman in Gothic horror by author and critic Kat Ellinger

–     A Little Chat with Dr. Mabuse, an archival interview with actor Wolfgang Preiss

–     US and German theatrical trailers

DISC 2 – THE FRENCH AND US VERSIONS (LIMITED EDITION EXCLUSIVE)

–     Restored original lossless mono English soundtrack for the US version