Charles Bronson is trapped on a train with a murderer in Alistar MacLean’s Breakheart Pass. This action-packed suspenseful western features our cool and calculated Bronson playing detective. A great cast including Richard Crenna, Jill Ireland, Charles Durning, and Ben Johnson highlights this better than average action/adventure film. Now with a new restoration, Kino Lorber Studio Classics returns to one of their first Blu-ray releases for a fitting update offering a stronger more detailed transfer with better color saturation and a new audio commentary track to round out the bonus features. Recommended.

A train carrying urgent medical supplies is on track to Fort Humbolt. A new platoon of troops, Governor Fairchild (Richard Crenna) and his fiance Marcia (Jill Ireland), Major Claremont (Ed Lauter), a doctor, a businessman, and a reverend are aboard. Along for the ride is the wanted criminal and medical expert John Deaken (Charles Bronson) and his holder Marshal Pearce (Ben Johnson). But when people turn up dead, Deaken’s medical experience is called upon to investigate the crimes. Only these aren't simple acts of murder. Something far worse is happening aboard the train - and awaiting them at the end of the line.

Alistar MacLean wrote some great adventure stories that made some great films. Where Eagles Dare, The Guns of Navarone to name just a couple of his most famous. He also dabbled in westerns with Breakheart Pass also known as Nevada Pass and Nevada Express. The story plays more like an action-adventure answer to Agatha Christie’s classic Murder on the Orient Express. The original novel wasn’t that great. It was alright, I read it years ago but it felt like a writer who assumed a lot about the old west and just played with genre tropes. His later screenplay effort was much tighter and actually made a better story overall. Better than the novel, but still a middling western.

While Bronson is on his A-Game playing less of a man of immediate action and more of a classic detective, the film is still very painted by the numbers. In terms of the primary mystery, the film telegraphs its moves early and often. The “who done it” aspect is practically a nonstarter. What’s more interesting with this film is what Bronson and his few allies do to stop the deadly plan behind the murders. When the action picks up in the second half with some impressive train stunts the film finds its rhythm and steams towards a fitting conclusion. 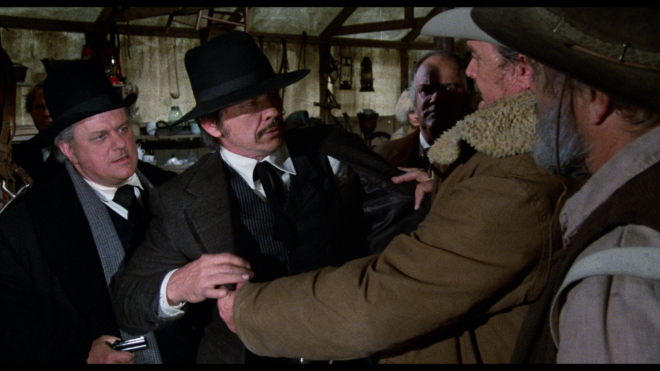 Ahead of his descent into the Cannon films of the 80s, this was one of Bronson’s better middle career movies. The story may be a bit stretched in places, but his performance is great and the supporting cast is top-notch. Once again his real-life wife Jill Ireland is his sort of romantic interest. Her presence in this film is odd - and it was in the book - because she ultimately holds little purpose. The film goes nearly an hour without her showing up as she's practically written out of the climax until it's nearly all over. Ben Johnson does what he always did best playing a lawman with some true grit. Bill McKinney is a lot of fun as a loud-mouth reverend with a few secrets of his own. Charles Durning comes in with another delightful schmuck, and be sure to keep an eye out for Mr. Lebowski, David Huddleston.

At the end of the day, Breakheart Pass is a good way to burn a couple of hours. Not the greatest movie ever made, but a fun one. It passes the time quickly offering some scenic Idaho views along with some pretty amazing set pieces - Bronson and his stunt double hanging off the side of the train over a ravine is still a heart-stopping sequence. Bronson does what he does best with a fun supporting cast and thankfully the film comes together enough that by the end the effort wasn't wasted. 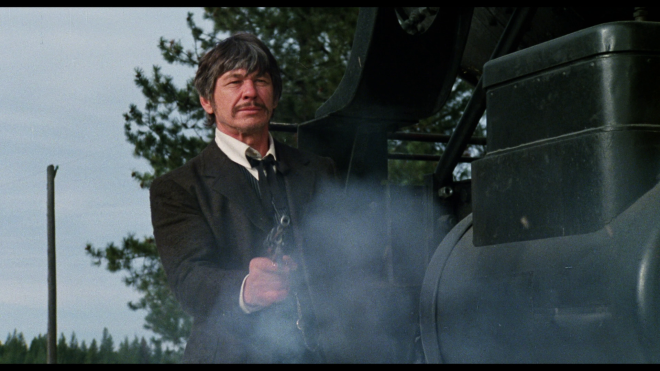 Vital Disc Stats: The Blu-ray
Kino Lorber Studio Classics returns to one of their very first Blu-ray movie-only titles Breakheart Pass to give it a fitting upgrade. This Region A BD-50 disc is housed in a standard case with slipcover and reversible insert artwork. The disc loads to a static image main menu with traditional navigation options. 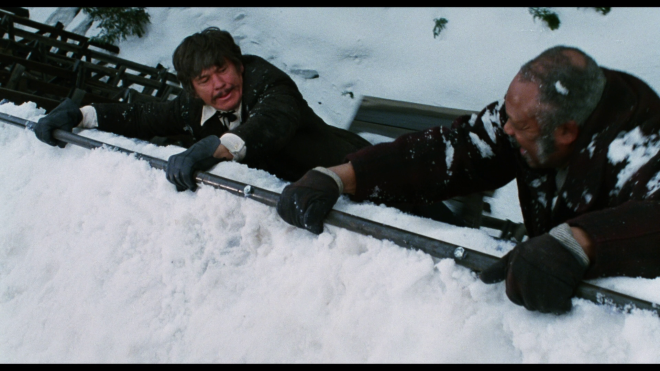 When Kino Lorber Studio Classics was getting into the Blu-ray game, it was very much a “Well, it’s great to have the movie on Blu-ray, at least” operation. You took what they could get. Their masters were on the iffy side, bonus features were virtually non-existent. Now, they’re offering up top-tier 4K Ultra HD titles, excellent catalog television favorites, and churning out worthwhile special editions.

It’s fitting that they’d go back to one of their earliest titles for a new release of Breakheart Pass. This new 1.85:1 1080p transfer was apparently struck from a new 2K restoration and the improvements are instantly apparent. The image maintains stronger details, a more natural film-like grain structure, and color saturation is greatly improved. Shot on location throughout Idaho and Arizona, the scenic snow-capped mountain vistas really come to life. 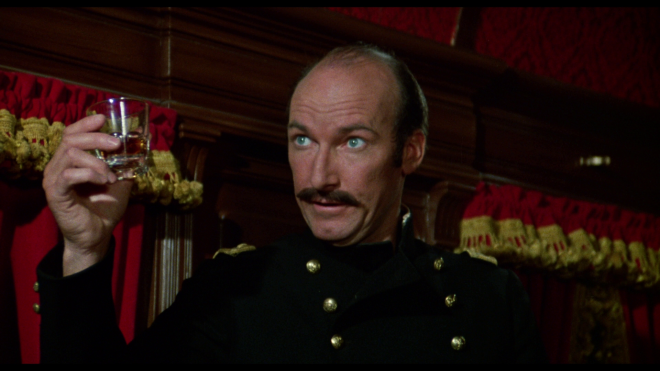 Black levels are also greatly improved. The 2014 disc was always too bright and washed out looking so with the more natural colors and healthier black levels there’s a better sense of depth to the image. Damage has also been mitigated. There’s still some slight speckling here and there, but nothing like the old disc. All in all, this is a very satisfying transfer breathing new life into this old favorite. 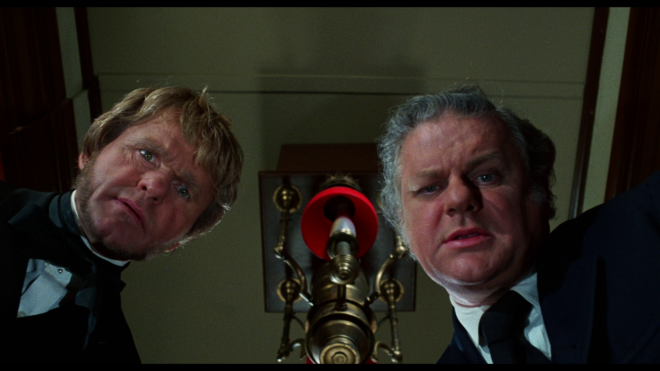 Doing a bit of disc flipping the DTS-HD MA 2.0 mix sounds to be the same as the 2014 disc - not to say that’s a bad thing. The audio was the main bright spot of that old disc with clear dialog, strong and present sound effects, and the Jerry Goldsmith score sounded terrific. That’s the case again here. This time around I flipped on the DTS Neural:X function to see how well it took and it was actually a pretty great experience. Not altogether necessary, but if you feel the desire to do so it’s worth it. 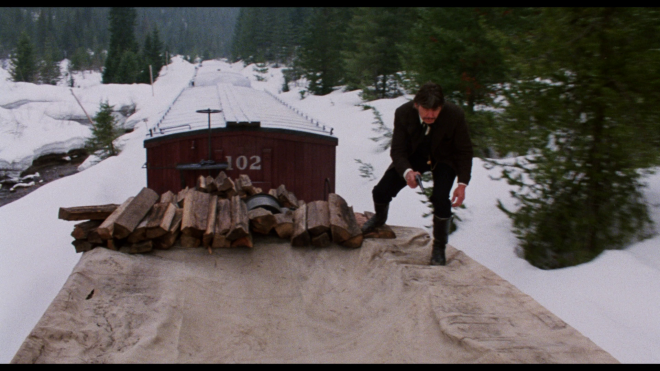 In addition to an improved transfer, this disc comes with a new audio commentary featuring frequent KLSC contributors Howard S. Berger, Steve Mitchell, and Nathaniel Thompson. This is another excellent track with the trio offering up plenty of information about the production and the cast and crew but they also give into some welcome fan reactions to events on screen so it’s much better than a dry and boring ramble of some other commentaries out there. After that is the usual KLSC trailer gallery. 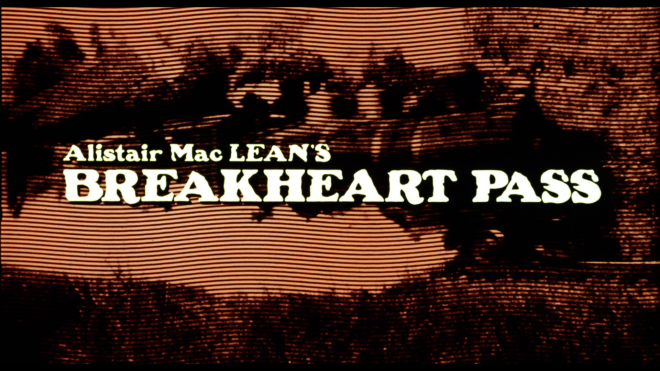 Breakheart Pass may not be one of Bronson’s best, but he’s great in it elevating the material past the clunky action/adventure murder mystery western of its literary roots. Bronson playing a restrained detective gives his character a welcome edge over the one-note caricatures of his later career. It may take a bit to get going but once the film finds it's pace its a fun ride.

Kino Lorber Studio Classics revisits one of their first titles and gives fans a worthwhile reason to upgrade. The new transfer is terrific. My only gripe really is that it’s not a full 4K restoration and UHD disc. The film may not be the greatest but visually it’d fit right at home on the format. The same great audio track is brought over and now there’s a great new commentary to enjoy as well. If you’re a fan or need to add Breakheart Pass to the collection - it’s an easy one to call Recommended.