A thrill-packed western with plenty of substance and a quintet of dimensional characters, The Naked Spur stands the test of time and stands as arguably the finest of the eight films James Stewart and director Anthony Mann made together. Rugged Rocky Mountain locations, stunning Technicolor photography, and solid performances enhance the rough-and-tumble tale of a bounty hunter's attempt to bring a fugitive to justice, and Warner Archive more than does justice to this engrossing adventure with a dazzling video transfer, immersive audio, and a couple of vintage supplements. Highly Recommended.

James Stewart and director Anthony Mann made several films together during the first half of the 1950s, including a war movie (Strategic Air Command), a blue-collar drama (Thunder Bay), and a musical biopic (The Glenn Miller Story), but it was their five westerns - all of them classics - that nabbed the most attention and stand as lasting testaments to their fruitful partnership. Many cite their first collaboration, Winchester '73, as the best of the bunch, but Bend of the River, The Far Country, The Man from Laramie, and especially The Naked Spur give it a run for its money.

Shot completely on location in the Rocky Mountains of Colorado and boasting a tight ensemble cast, Oscar-nominated script, and lustrous Technicolor cinematography, The Naked Spur possesses all the elements that make the Stewart-Mann movies so popular and enduring. Leading the list is a substantive story brimming with conflict and laced with potent themes. Mann, who cut his teeth in the murky world of film noir (do yourself a huge favor and watch T-Men and Raw Deal, the movies that put Mann on the cinematic map), was one of the first directors to buck the cut-and-dried good vs. evil, shoot-’em-up western formula and instead allow complex, morally ambiguous characters to drive the drama. Though Mann still peppers his westerns with plenty of action and excitement, it’s the flawed, tortured, often surprising characters who rope us in and keep us riveted throughout. 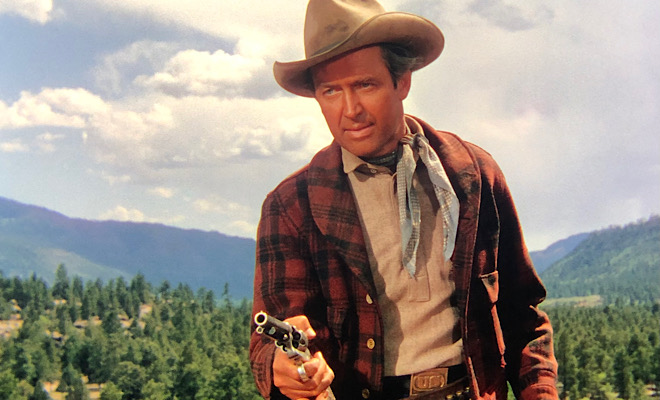 It's 1868, and bitter rancher-turned-bounty hunter Howard Kemp (Stewart) hopes to track down, subdue, and turn in fugitive murderer Ben Vandergroat (Robert Ryan), pocket the $5,000 reward, and use the cash to reclaim the Texas land he lost while serving in the army. Along the way, he encounters quirky prospector Jesse Tate (Millard Mitchell) and “morally unstable” Civil War vet Roy Anderson (Ralph Meeker), both of whom join in the hunt and hope to profit from it.

Jesse and Roy help Howard capture Ben, who is traveling with Lina Patch (Janet Leigh), a young woman whose dead father was Ben’s friend. The naive Lina believes Ben to be a good man who’s been wrongly accused, but her loyalty is tested when Ben manically pits his three adversaries against each other in a desperate attempt to wriggle out of their grasp and escape with Lina to California. Like a puppeteer, Ben pulls the strings, but as tensions mount and tempers flare, discord develops, alliances shift, and violence ensues, putting everyone at risk.

Exciting rockslides, an intense Indian attack, heated confrontations, and a harrowing climax involving a treacherous river crossing are all shot with verve and artistry by Mann and cinematographer William Mellor, who also maximize the impact of the rugged locations. The small cast lends an effective sense of claustrophobia to the outdoorsy yarn (aside from extras portraying marauding Indians, only five actors populate the film), and the literate script by Sam Wolfe and Harold Jack Bloom eclipses many of its genre cousins. (1953’s Titanic bested it for the Best Story and Screenwriting Oscar.) 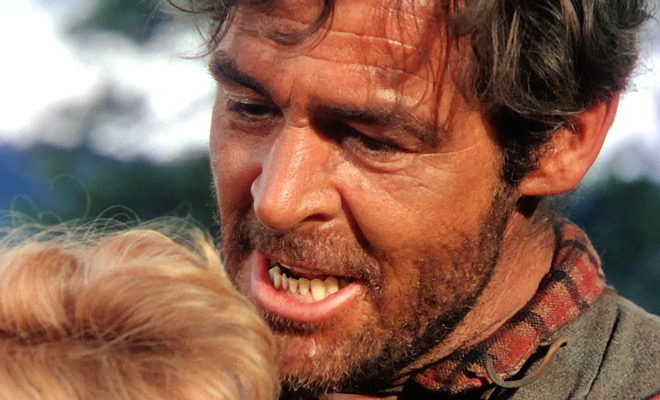 Stewart exhibits his patented earnestness, but more than a hint of darkness taints his character’s soul, resulting in an edgy, passionate, utterly human portrayal. Ryan relishes playing his rotten-to-the-core outlaw and at times seems to be enjoying himself a bit too much, but he’s such a fine performer it’s easy to forgive any overplaying. As the only woman in the cast, Leigh - who was just 24 at the time and still honing her craft - files a sincere and spunky performance, holding her ground against all the testosterone and holding her own with such established pros as Stewart and Ryan.

The often underrated Meeker makes a statement as the charming, slightly unbalanced pretty-boy soldier, and Mitchell, who’s best known as the stuffy, square-jawed studio chief in Singin’ in the Rain (released the previous year), channels his best Walter Huston as the cantankerous bearded prospector who gets more than he bargains for when he teams up with Howard. Sadly, The Naked Spur would be the actor’s penultimate film; Mitchell would die of lung cancer at age 50 a mere eight months after the picture’s premiere.

Crackerjack entertainment from beginning to end, The Naked Spur still delivers the goods almost seven decades after its premiere. Flesh-and-blood characters, an engrossing story, and style galore keep this invigorating western fresh and remind us just what a master craftsman Mann was, especially when he worked with Stewart. 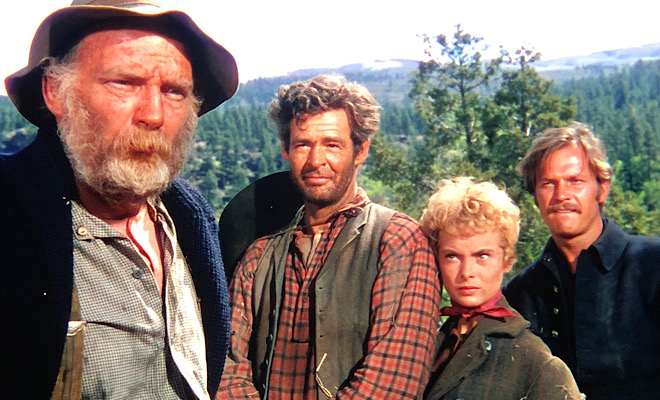 Vital Disc Stats: The Blu-ray
The Naked Spur arrives on Blu-ray packaged in a standard case. Video codec is 1080p/AVC MPEG-4 and audio is DTS-HD Master Audio 2.0 mono. Once the disc is inserted into the player, the static menu without music immediately pops up; no previews or promos precede it.

MGM plus Technicolor usually equals a splashy musical, but the lush, vibrant hues also serve western scenery well, and this glorious 1080p/AVC MPEG-4 transfer immerses us in the craggy mountains, verdant meadows, and frothy rivers of rural Colorado. Superior clarity and contrast add to the splendor of William Mellor’s impressive cinematography, and just enough grain is present to lend the canvas a lovely film-like feel. Fine details like the dusty dirt on Stewart’s wool jacket, the contours and textures of rocks, the weaves of costume fabrics, faint smoke, and the fluttering foliage in the breeze are all wonderfully distinct, and sharp close-ups showcase Stewart’s weather-beaten face, Mitchell’s scraggly white beard, the stubble on Ryan’s cheeks, and Leigh’s peaches-and-cream complexion. Bold reds, crystal blues, sunny yellows, and lush greens keep the eye engaged, and while flesh tones err slightly toward the ruddy side, they still look natural. Rich blacks and bright yet stable whites nicely balance the image, good shadow delineation keeps crush at bay, and no nicks, marks, or scratches dot the pristine source material. A bit of softness creeps in from time to time, but once again Warner Archive serves up a dazzling presentation of an MGM classic that leaves any previous home video version in the proverbial dust.

A surprisingly robust DTS-HD Master Audio 2,0 mono track puts us in the thick of the action and enhances the rugged atmosphere of the Rocky Mountain locations. The rockslides are especially impressive, as the massive boulders careen down steep cliffs and crash onto the ground below with thunderous force. The rushing river rapids, crackling thunder, rain, and - of course - gunshots and fisticuffs are crisp, and excellent fidelity and tonal depth heighten the impact of Bronislau Caper's rousing score. A wide dynamic scale handles all of the highs and lows without any distortion, all the dialogue is well prioritized and easy to comprehend, and no age-related hiss, pops, or crackle intrude. This is a top-notch track that certainly ramps up the excitement of this often thrilling western.

A few vintage supplements are included on the disc.

James Stewart and director Anthony Mann team up for another exciting western packed with thrills, dimensional characters, and plenty of substantive conflicts. Gorgeous Rocky Mountain scenery adds to the appeal and authenticity of The Naked Spur, along with colorful performances from Robert Ryan, Janet Leigh, Ralph Meeker, and Millard Mitchell. An eye-popping Technicolor transfer, robust audio, and a couple of vintage supplements seal the deal and make this top-flight Warner Archive presentation of a western classic a must for fans of the genre. Highly Recommended.