The Window might not be as well known as a similarly titled Alfred Hitchcock thriller, but it’s almost as good. The taut story of a young boy with a penchant for concocting tall tales who witnesses a murder but can’t get anyone to believe him features a strong performance from child actor Bobby Driscoll and expert direction from the under-appreciated Ted Tetzlaff. Warner Archive has given this tidy, suspenseful film noir a marvelous makeover, with beautifully restored video and audio more than making up for the complete lack of supplements. If you’re a fan of gritty suspense flicks, you’ll certainly want to peer into The Window. Highly Recommended.

The Boy Who Cried Wolf stands as one of Aesop’s most time-honored and beloved fables. Who among us hasn’t heard (or read to their own kids) the tale of a young lad who lies so often and so convincingly he can’t get anyone to believe him - or come to his aid - when he finds himself in actual peril? The cautionary yarn remains a staple of children’s literature, but if you can somehow divorce it from that genre, its themes also fit the gritty world of film noir like a glove. Writer Cornell Woolrich recognized the fable's potential as an exercise in suspense and constructed such a clever mystery around it, RKO studio chief Dore Schary quickly snatched up the rights and produced The Window, which moves the locale to the slums of New York City and focuses on a fanciful boy who drives his parents to distraction with countless fabrications. (Woolrich would later write another short story about a window, a tenement, and a murder that would be adapted into an iconic Alfred Hitchcock thriller.)

Impish pre-teen Tommy Woodry (Bobby Driscoll) makes up stories to enliven his dreary, deprived existence and fit in with a cliquish group of boys in his low-income neighborhood. His loving but exasperated parents, Ed and Mary (Arthur Kennedy and Barbara Hale), try to instill in him good values, but when Tommy makes up a whopper about the family moving out of the city that gets back to their landlord, who in turn almost rents their tiny apartment out from under them, Ed and Mary really come down hard on Tommy. That night, the oppressive summer heat keeps Tommy awake, so he asks his mother if he can sleep on the fire escape. His vantage point allows him to peer into the lower portion of the apartment window above him, where he espies his upstairs neighbors, Joe and Jean Kellerson (Paul Stewart and Ruth Roman), stealing money from the wallet of a passed-out man who is visiting them. When the man comes to and discovers the theft, the resulting scuffle ends with Joe killing the man in cold blood.

A horrified Tommy tells his parents what he saw, but of course, they think it was a nightmare or ghoulish fantasy. Dismayed by their disbelief and dismissive attitude, Tommy decides to take matters into his own hands. He visits his local precinct, but after a cursory police investigation proves fruitless, a game of cat and mouse ensues between Tommy and the ever more desperate Kellersons, who seek to permanently silence the only witness to their crime. 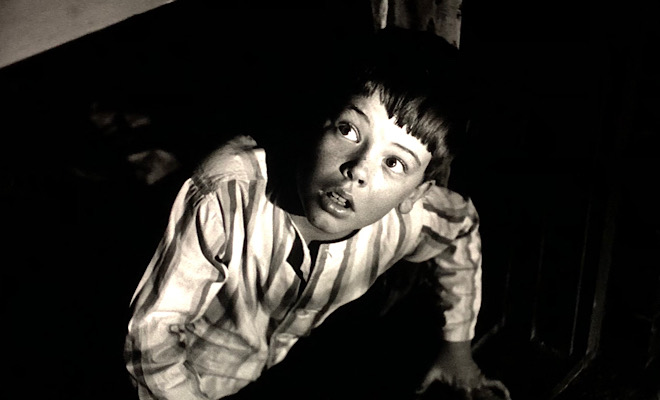 Director Ted Tetzlaff, who helmed only a handful of films after a highly successful career as a cinematographer (his noteworthy credits include Alfred Hitchcock's Notorious), constructs a taut, often claustrophobic film that benefits immeasurably from the grungy, dilapidated New York City locations. Telling a chilling tale through a young boy's eyes is no easy task, but Tetzlaff expertly combines a sense of childlike wonder and fear with all the essential adult noir touches necessary to fashion a successful suspense movie. While watching Tommy try to evade, outfox, and deter the increasingly agitated Kellersons, especially in a crumbling, abandoned tenement during the exciting climax, it’s tough not to draw parallels to Macaulay Culkin’s showdown with Joe Pesci and Daniel Stern - minus the slapstick shtick - in Home Alone.

Driscoll, who made a splash in two Disney movies - Song of the South and So Dear to My Heart (he would later star in Treasure Island and supply the voice of Peter Pan in the 1953 animated classic) - files an authentic, often riveting portrayal that never relies on any cute scene-stealing tricks to nab attention. The Window may only run 73 minutes, but its brevity doesn’t make it any easier for a child actor to carry such an intense film. Driscoll, under Tetzlaff’s expert tutelage, proves he can handle the assignment and was justly rewarded with a miniature Oscar for the year’s finest juvenile performance. (The award was not given annually, but rather only if a particular portrayal merited the citation.) Tragically, Driscoll would become one of many child star casualties, turning to drugs and alcohol when roles dried up and the spotlight shut off with the onset of puberty. The destitute actor - all too ironically - would be found dead at the tender age of 31 in an abandoned New York City tenement, much like the one in The Window, due to side effects from his addiction.

Kennedy, fresh from his triumph portraying Biff in the original Broadway production of Arthur Miller’s Death of a Salesman, makes a notable impression as Tommy’s strong yet tender blue-collar dad. A powerful, magnetic performer who would go on to earn five Oscar nominations and enliven scads of classic films, Kennedy is wonderfully restrained here and creates a comfortable chemistry with both Driscoll and Hale, who would achieve her greatest success on television a decade later as Della Street, the loyal assistant to Raymond Burr’s legendary defense attorney, in the long-running series Perry Mason. A no-glamor but still glamorous Roman in one of her first billed roles also shines, and the always reliable and criminally underrated Stewart makes a very effective villain who seems to have no compunction terrorizing a frightened boy if it will help him dodge a murder rap. 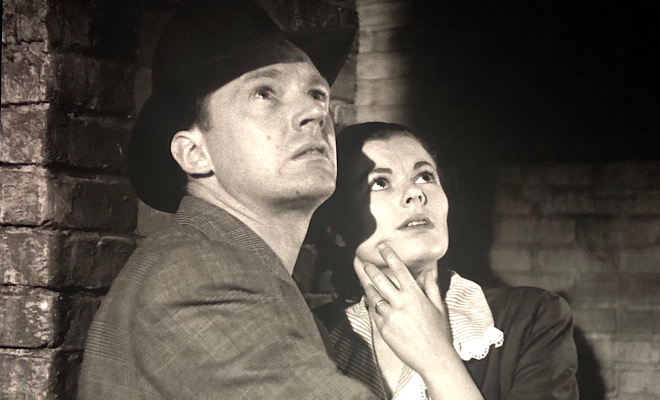 Shot in 1947 under Schary’s auspices, The Window was shelved for almost two years because billionaire Howard Hughes, who bought RKO Pictures in the spring of 1948 and instantly installed himself as production chief, reportedly hated the film. Hughes' disastrous first year as studio head (RKO's profits fell by 90%!) prompted the mogul to begrudgingly release The Window a year later in an attempt to combat the company's massive financial woes. Much to his amazement, the low-budget drama became a sleeper hit, raking in a hefty profit and earning almost unanimous critical acclaim. It also spawned three remakes, the most recent of which was the 1984 thriller Cloak & Dagger starring E.T.'s Henry Thomas and Dabney Coleman.

Style, tension, a first-class script, solid performances, expert pacing, and a slam-bang finish all combine to make The Window one of Hollywood’s best B-grade film noirs. Tetzlaff’s terse, economical approach keeps the picture on track, and his ability to develop dimensional characters, fully integrate the Big Apple locations, and craft crackling suspense all within the movie’s tight 73-minute running time elevates this oh-so-simple tale and ensures an absorbing and memorable cinematic experience. 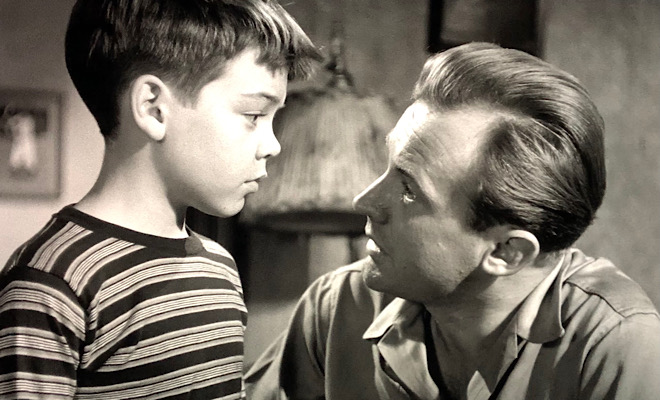 Vital Disc Stats: The Blu-ray
The Window arrives on Blu-ray packaged in a standard case. Video codec is 1080p/AVC MPEG-4 and audio is DTS-HD Master Audio 2.0 mono. Once the disc is inserted into the player, the static menu without music immediately pops up; no previews or promos precede it.

From the moment the textured background upon which the opening titles are superimposed hits the screen, it’s resoundingly evident this will be another stunning Warner Archive transfer. Wonderful vibrancy, terrific clarity, and pitch-perfect contrast distinguish this 1080p/AVC MPEG-4 rendering that also bursts with inky blacks, bright yet stable whites, and beautifully graded grays. Details in the tenement bricks, dilapidated walls, and fraying wood beams are distinct, costume textures and patterns come across well (especially the stripes on Tommy’s pajamas), silhouettes are clean, and excellent shadow delineation keeps crush at bay except during the dingiest scenes. Light grain preserves the look and feel of celluloid and sharp close-ups showcase the glistening sweat on the actors’ careworn faces. No nicks, marks, dirt, or stray lines dot the pristine source, almost certainly the result of a new and meticulous restoration. (Sadly, Warner Archive no longer provides transfer and restoration information in its press releases, so I can’t give any specifics.) This marvelous presentation faithfully honors the naturalistic cinematography and completely revitalizes this low-budget, atmospheric film noir.

The DTS-HD Master Audio 2.0 mono track supplies clear, well-modulated sound. Sonic accents like sirens and rumbling el trains are crisp, as are the subtle atmospherics of the teeming New York cityscape. A wide dynamic scale handles all the highs and lows of Roy Webb's robust score without a hint of distortion, all the dialogue is well prioritized and easy to comprehend, and no hiss, pops, or crackle disrupt the on-screen tension.

There are no supplements whatsoever on the disc.

A taut, involving, highly effective exercise in suspense that features a humdinger of a finale, The Window takes a time-honored children’s fable and puts a delicious film noir spin on it. A great performance by child actor Bobby Driscoll anchors and propels this sleeper hit that’s been given a glorious makeover by Warner Archive. The lack of supplements is disappointing, but excellent video and audio transfers bring this B-movie classic back to life and make it very worthy of a purchase for noir fans. Highly Recommended.