Aretha hand-picked her and Jennifer does her proud. Hudson plays Franklin and her heartfelt, often riveting portrayal of the Queen of Soul makes Respect one of the better recent showbiz biopics. Director Liesl Tommy's reverent film may be glossy, but it doesn't gloss over Franklin's faults, and though there's plenty of drama, it's the music that rightfully grabs the spotlight. A vibrant video transfer and potent Atmos audio track enhance the appeal of Universal's Blu-ray presentation of this elegant and entertaining movie. Recommended.

I've been paying Aretha Franklin respect for decades. One of the first 45s I ever bought was "Until You Come Back to Me (That's What I'm Gonna Do)" when I was 11 years old back in 1973. I learned about "Respect" and "Chain of Fools" a little later, loved her sassy version of "Think" in The Blues Brothers, and cheered her mid-'80s comeback. (Franklin may have hated "Freeway of Love," but 22-year-old me couldn't get enough of it!) My favorite Aretha performance, though, is one of her last, when the 73-year-old diva blew the roof off Washington, D.C.'s Kennedy Center as she saluted 2015 honoree Carole King with her show-stopping rendition of "(You Make Me Feel Like) A Natural Woman." I may have watched it on TV, but a more thrilling and emotional "live" performance I don't think I've ever seen.

I've also avidly followed Jennifer Hudson's career since she first impressed me with her powerhouse vocals as a contestant on American Idol back in 2004. Though no one will ever eclipse the Queen of Soul, Hudson perhaps comes closer to approaching Franklin's vocal prowess and soulful delivery than any other singer. She showed her mettle belting out Effie White's signature ode to pain "And I Am Telling You I'm Not Going" in Dreamgirls (for which she won a Best Supporting Actress Oscar) and now pays Aretha the ultimate tribute by beautifully channeling the legendary artist in director Liesl Tommy's reverent, entertaining biopic Respect.

Before her death in 2018, Franklin hand-picked Hudson to portray her on screen. Such an endorsement surely carried with it the heavy burden of doing justice to a bona fide national treasure as well as proving herself worthy of the honor, but if Hudson ever felt the weight of all that pressure (and apparently she did, according to one of the disc's included featurettes), she doesn't let it show. As self-assured as Franklin herself, Hudson commands the screen and distinguishes a film that would be far less successful without her participation. Most importantly, she brilliantly evokes Aretha during the musical numbers without resorting to shameless imitation. After watching Respect, it's impossible not to respect Hudson and agree Aretha made the right choice. Without question, Hudson does her proud. 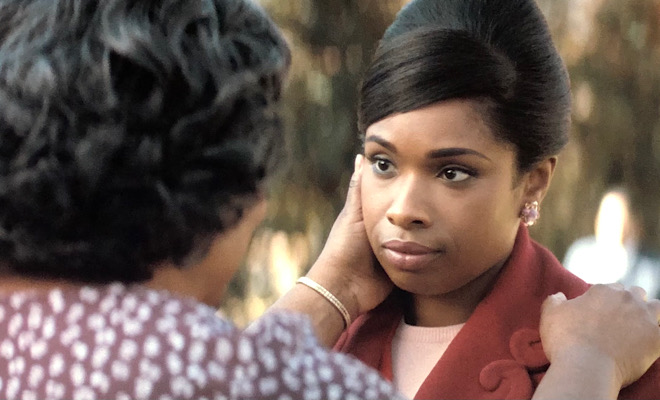 Respect covers the first 30 years of Aretha's life up until she recorded her landmark live gospel album in 1972, and though her story holds our attention for almost two-and-a-half hours as it chronicles her transition from an Ella Fitzgerald jazz clone to an R&B trailblazer at Jerry Wexler's Atlantic Records, it treads familiar showbiz biopic territory. There's the domineering father (Forest Whitaker) who wants to keep a stranglehold on his daughter's career, the artistic crisis that leads to heady success, the toxic relationship with an abusive first husband (Marlon Wayans) who feels emasculated by her fame, the alcoholism that threatens to destroy everything, and the ultimate resurrection and redemption. Parallels to recent films chronicling the lives of rock-'n'-roll legends Freddie Mercury and Elton John certainly can be drawn, and while they somewhat dull the impact of Respect, they don't lessen its entertainment value.

The prevailing "finding your voice" theme is an ironic (and somewhat trite) choice for a film about Franklin, who always possessed a God-given instrument of immense power, maturity, and emotion, yet from an artistic and metaphoric standpoint it makes sense. Learning to become an independent woman, take charge of her career, assert her artistic integrity, become a social activist, and expose the world to the gospel music that fuels her creative spirit are all critical parts of Franklin's development. Screenwriter Tracey Scott Wilson both deftly juggles those elements and seamlessly weaves them into her script, while Tommy - directing her very first feature - makes sure they don't stall the movie's musical momentum. Tommy and Wilson also resist the temptation to canonize Aretha. Though hardly a warts-and-all portrait, Respect makes a point of depicting Aretha's periodic arrogance, diva behavior, stubbornness, affection for excess, and self-destructive substance abuse while celebrating her passion for civic causes, abiding commitment to the church, and pitch-perfect musical instincts. 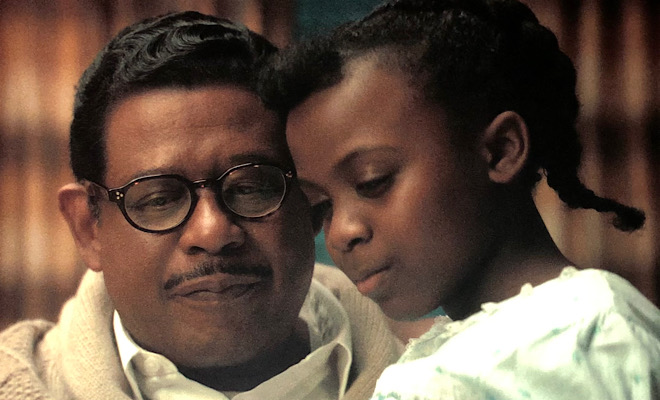 Tommy also assembles a top-notch cast to support Hudson, but ensures no one overshadows her. Whitaker files a convincing portrayal as Aretha's imposing minister father who hobnobs with Dr. Martin Luther King and promotes racial equality while suppressing his daughter's personal and professional spirit. Wayans is especially good as first husband Ted White (though the movie glosses over his very shady background), Audra McDonald shines in a too-brief role as Aretha's stalwart, sympathetic mother, and Mary J. Blige impresses as singer Dinah Washington in another small part. Titus Burgess as gospel legend James Cleveland, Marc Maron as the down-to-earth Wexler, and Tate Donovan as a stuffy Columbia Records executive also assert themselves well, and in her film debut the wide-eyed Skye Dakota Turner makes a big splash as the spunky Aretha as a young girl.

Though Respect runs a bit long, at times feels a little Dreamgirls-esque, flirts with elements of A Star Is Born (but then again, what showbiz movie doesn't?), and plays fast and loose with some key facts (a common, frustrating biopic pitfall), the film succeeds in painting a balanced - if somewhat slick - portrait of Franklin. Hudson, with her soaring vocals and intuitive performance, carries Respect, but Tommy also deserves credit for delivering a polished production that captures not only Franklin's essence but also the turbulent era in which she lived. 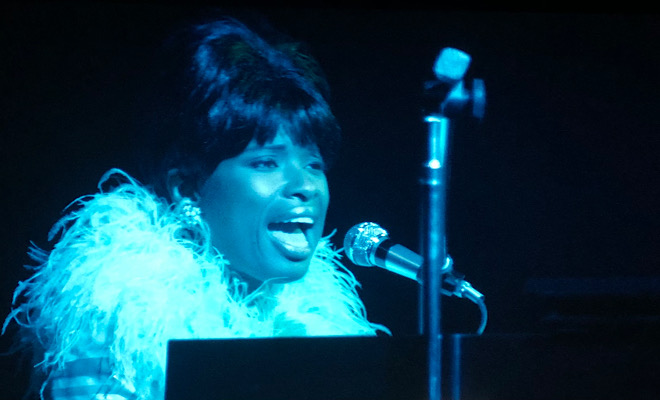 After the obligatory post-scripts over Hudson's version of "Amazing Grace," Respect rightly ends by paying respect to the Queen herself with a truncated clip from her unforgettable Kennedy Center appearance that plays over the end credits and remains as mesmerizing and inspirational today as it was when it first aired in 2015. The fact that Aretha is gone now - and surely singing in the heavenly choir - makes the performance resonate even more strongly and become a fitting, heartfelt coda to Respect and lasting tribute to an insanely talented, influential, larger-than-life, yet oh-so-natural woman.

Vital Disc Stats: The Blu-ray
Respect arrives on Blu-ray packaged in a standard case inside a sleeve with raised lettering. A standard-def DVD and leaflet containing a code to access the iTunes digital copy are tucked inside the front cover. Video codec is 1080p/AVC MPEG-4 and audio is Dolby Atmos. Once the disc is inserted into the player, the full-motion menu with music immediately pops up; no previews or promos precede it.

Glossy showbiz biopics deserve glossy transfers and Universal complies with a silky smooth 1080p/AVC MPEG-4 rendering that spotlights all the glitz and glamor that defined Franklin's life on and off stage. Crystal clarity and excellent contrast distinguish this transfer that despite the lack of grain exudes a lovely film-like feel. Slightly muted colors lend the picture a natural look, but the hues emit enough vibrancy to please the eye. Costume and jewelry details are crisp, skin tones are true, inky blacks and well-defined whites anchor the image, and excellent shadow delineation keeps crush at bay. Background details are easy to discern, close-ups possess plenty of punch, and no digital anomalies sully the pristine print. Unlike Aretha, this transfer lacks the wow factor, but provides a pleasant, seamless viewing experience. It's just a shame Universal didn't have enough respect for Respect to deem it worthy of a 4K UHD release.

The video may not be state-of-the-art, but at least Universal saw fit to dress up Respect with a Dolby Atmos track. A movie about the Queen of Soul demands the best possible audio, and though surround and Atmos effects come at a premium, the quality of the sound remains consistently high. A wide dynamic scale embraces the soaring highs and weighty lows of both Hudson's dynamite vocals and her instrumental arrangements that cover such varied genres as soul, gospel, blues, and standards. The track really comes alive during the concert sequences, pumping out rich, crystalline tones that effortlessly fill the listening space and showcase the subtle nuances, impressive range, and unbridled power of Hudson's pipes. Distinct stereo separation across the front channels and strong bass frequencies add aural interest, while subtle atmospherics and sonic accents come through crisply and cleanly. All the dialogue is clear and easy to comprehend and no distortion mars the mix. Though I craved a bit more surround and Atmos activity, it's tough to fault this top-notch track that shows off Hudson to her best advantage.

Respect gives Aretha Franklin just that. Reverential yet forthright, this glossy, entertaining biopic honors the Queen of Soul's incomparable talent and influence while addressing her demons and depicting her diva behavior. Jennifer Hudson brings the iconic singer to brilliant life in a powerful performance that overshadows the film's shortcomings. A silky video transfer and potent Atmos track pump up the appeal of Universal's Blu-ray presentation, but it's a shame the studio didn't produce a 4K UHD release as well. Recommended.