After turning getting stuck on a commuter bus into one of the biggest and best action thrillers of the 90s, Jan de Bont pointed his attention to one of the deadliest weather phenomena in Twister. Starring Bill Paxton, Hellen Hunt, Cary Elwes and some guy called Phillip Seymour Hoffman - this tall tale of competing storm chasers may have its cornball human moments but the storm sequences still pack an adrenalin-fueled wallop. Now Turbine Media Group is unleashing the full fury of this film in a new two-disc Blu-ray Mediabook release offering brand new Dolby Atmos or Auro 3D audio tracks! If you’re ready to rattle the walls and blow out your sound system, this comes Recommended!

Tornadoes are a deadly unpredictable force of nature capable of devastating entire cities in mere moments without warning. During one of the largest storm systems to ever hit Oaklahoma, storm chasers Bill Harding (Bill Paxton) and his estranged wife Jo (Helen Hunt) and their team have a chance to test a new tornado tracking device and give people better warning. With a rival storm chasing team on the hunt, each twister is getting bigger, more destructive, and deadly.

Similar to how I have a need to watch The Shining every year in the icy depths of winter, I have to watch Twister every summer. As a kid, my family had an obsession watching big storms hoping for a glimpse of a funnel cloud passing over our rural Michigan home. My sister and I would stare in awe at those creepy green skies with our dad while our mom hid in the basement. 1996’s Twister was the closest we ever got to see the real thing. Our local multiplex had just upgraded to digital sound and it was a crushing cacophony of action and adrenaline and we were loving it… then the film broke just as the last tornado was chasing our heroic meteorologists.

Admittedly the film is all over the place as it tries to sammich in a pretty tepid relationship melodrama between Paxton and Hunt against the backdrop of a lot of scientific mumbo-jumbo meteorological jargon. Penned by Michael Crichton and his wife Anne-Marie Martin, the original script was extremely jargon-heavy and basically unfilmable. It took a number of uncredited script doctors to make this film not sound like we’re watching the local news weatherman for two hours. 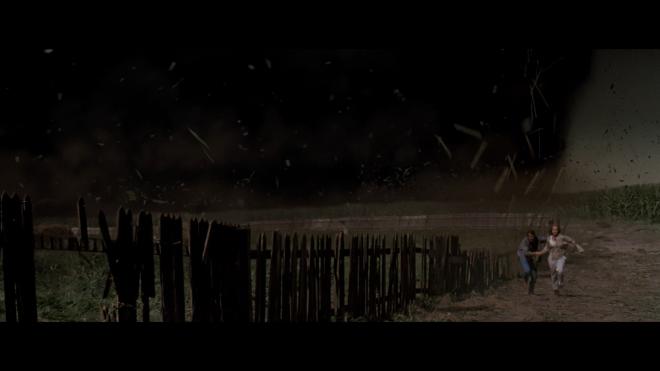 You get a line read like: “The N.S.S.L. says the cap is breaking. Tower’s going up 30 miles up the dry line.” That doesn’t make a lick of sense to Average Joe’s and doesn’t amount to anything dramatic,  but it sounds all sciencey and cool so it gets a pass. On the other hand Paxton’s speech: “Things go wrong. You can’t explain it! You can’t predict it! Killing yourself won’t bring your dad back.” Now that is a thick slice of delicious melodrama cheese! Toss in an evil scientist villain with Cary Elwes and you have yourself a fully packed disaster movie!

I’ll never be the first person to call this a truly great movie. But for a special effects show with amazing sound design, Twister is a winner! Yeah, you can spot all of the bright sky backgrounds that don’t line up with the dark and stormy CGI twister in front of them. Sure the brief love triangle storyline is hammy, but it gets you invested in the characters for at least a little bit. You also need to appreciate the number of practical effects that went into this film from blowing up a tanker full of gas to building and demolishing an entire town to recreate the storm damage.

Jan de Bont took all of the tricks he learned for Speed and hit the accelerator for Twister. This movie is a genuine popcorn flick classic. It may not hold up for the youngsters out there, but for oldtimers like myself, it’s a nostalgic favorite. Prior to his passing Paxton tried to get a sequel off the ground and recently Helen Hunt even pitched an idea but alas no one bit. We can get half a dozen stupid Sharknado movies - but there’s only one true Twister. 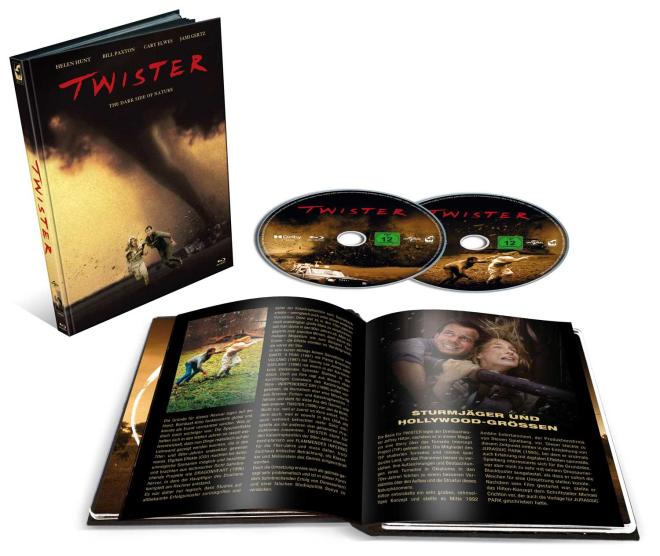 Twister crashes onto Blu-ray in a two-disc deluxe Mediabook set from Turbine Media Group in Germany. Pressed on two BD-50 discs, the first disc offers a new Dolby Atmos mix while the second offers a new Auro 3D audio mix. Both discs have the same set of extra features. Inside the Mediabook is a 24-page essay in German by Tobias Hohmann. The discs load to a static image main menu with traditional navigation options. The German language option is the default so you need to set it to English before moving forward. We haven’t gotten hands on the physical packaging, we were only provided a raw disc for this review. When we get the final product we'll update this review with pics and or additional video. 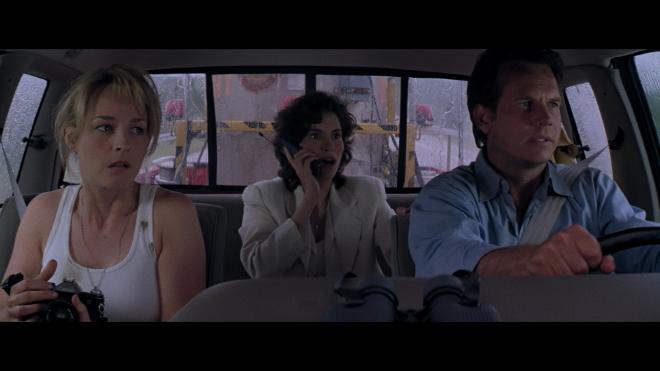 When Twister hit Blu-ray in the U.S. from Warner Brothers it was slathered in terrible waxy-looking DNR. Overseas Universal Studios has the rights and their master wasn’t hit in the face with the DNR ugly stick. For this release Turbine Media Group used the Universal master with some extra tweaks of their own to offer an image that maintains the presence of film grain, facial features, and production design details. Unfortunately, the rights to do a full 4K restoration apparently weren’t offered to them.

As someone who has the Warner Blu-ray and regularly watches the old Laserdisc instead - I felt this transfer is a notable step up. Not perfect, as Turbine would have loved to do a new scan they made the best with what was available. Paxton & Pals don’t look like they were splashed down in Botox. Clothing textures and small details in the vehicles, dents, and dings in their trucks all pop much clearer. Colors are more natural-looking and not so harsh and washed out with brighter and more present primaries. Skin tones also look much more healthy. While we all hoped to see a 4K restoration with HDR, this is certainly an improvement over what was available here stateside. 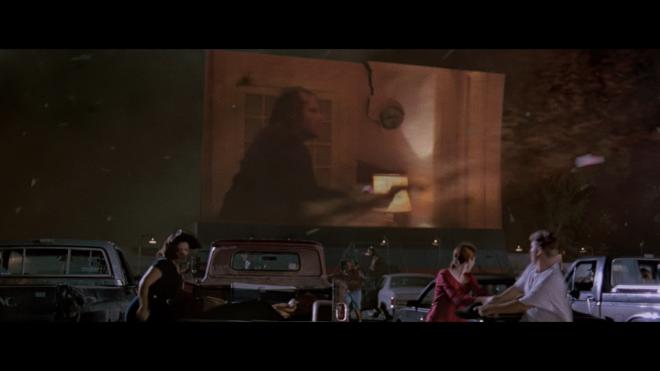 The sound design for Twister has always been one of its best features - it’s a movie that demands you turn your volume as high as your ears can tolerate. While the Warner Bros. disc had a solid Dolby TrueHD 5.1 mix with some amazing surround qualities, the dialog was pretty poorly mixed forcing you to turn the volume up for quiet moments and then slam it back down for the big action scenes. This new mix nixes that issue - and goes BIG with the sound design for one of the best Atmos tracks I’ve ever heard.

This is a LOUD mix in every way possible and it’s amazing. From the opening sequence forward this mix perfectly balances the calm quiet moments against the big action storm sequences. Dialog is much stronger and pushes a more natural presence throughout the film so when people are running and screaming for their lives we actually get to hear and feel that. During quiet sequences surrounds are well placed with verticles opening up to set space and dimension with some occasional pinpoint effects like when Jo is on top of the van fixing their Dopler rig. When Bill and Joe first meet up again, there are distant thunder sounds that barely registered in previous mixes but now punch the rears a little stronger without overwhelming the rest of the scene.

During storm scenes, everything fires with some impressive object placement. The vertical channels bring height to the mix so when debris or hail slam into cars or trucks or if a cow moves across the screen - the sounds are specific to wherever the activity is coming from and moves up, down, and across the soundscape with some really fun imaging. LFE is a beast. What more can I say there? The sounds of heavy-duty truck engines, the roaring of the tornadoes - the subs are constantly active and rumbling away during these action-heavy moments. You’re going to want to play this as loud as you can! In 25 years I’ve watched Twister countless times on a variety of sound systems but this new Atmos track actually made me feel like I was back in the theater watching the movie for the first time again. I’m not set up for the 13.1 Auro 3D so I can only imagine what kind of a monster that track is based on how amazing this Atmos mix is. 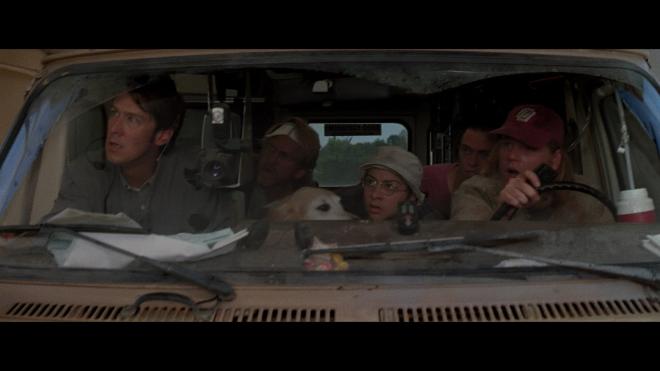 Not to leave anything on the floor, Turbine tacked on a nice selection of bonus features including a new interview with Jan de Bont, his original audio commentary with special effects supervisor Stefen Fangmeier (which is a great listen), and a bunch of other archival features. 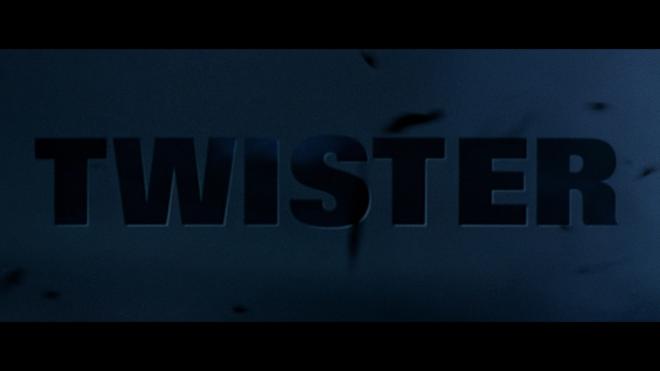 25 years is a heck of an anniversary to celebrate for any movie let alone a summertime disaster flick like Twister. While the human element is a bit on the silly side, Jan de Bont crafted a movie that is a genuine thrill ride amping up the adrenaline one tornado at a time. The special effects may be a tad dated by today’s standards, but for their time they were state-of-the-art, and by blending practical effects and full-scale sets to be eviscerated on camera you're right in the middle of the action. Paxton and Hunt carry the film but the rest of the cast deserves praise for being able to rattle off all that science jargon and look like they know what the hell they’re saying. This is just classic summer movie fun pure and simple.

Turbine Media Group helps Twister celebrate its Silver Anniversary in style. While a new 4K transfer sadly wasn’t possible, they did use the superior international master from Universal, so it at least looks somewhat better than the terrible DNR wax museum version we got stateside. But the real reason to upgrade is for the new Atmos and Auro 3D audio mixes. These tracks are sure to stress test your sound system in all the best ways. Toss in some great new and archival bonus features and you have a pretty terrific package. If you’re a fan willing to import - Recommended