Tobe Hooper returns to helm the black comedy The Texas Chainsaw Massacre 2, a twisted, downright gonzo sequel that darkly satirizes the first film's legacy and the 80s culture of living in excess. Imported from Germany, the standalone Blu-ray from Turbine Media Group terrorizes with an excellent audio and video presentation and a great collection of supplements. The overall package is a Recommended must for any cult collector’s library.

Twelve years after his micro-budgeted, seminal classic terrorized audiences with the horrifying, jarring sounds of a chainsaw, Tobe Hooper returned to Texas in The Texas Chainsaw Massacre 2, which catches up with the raving lunatic family of cannibals. Only this time, the director departs from the intensely apprehensive cinéma vérité atmosphere of the original in favor of a bonkers black comedy. Whereas in the first movie, the violence was implied and left to the imagination of viewers, Hooper now splatters the screen with the grisly mayhem and lots of in-your-face bloodletting gore. On top of that, he doubles the insanity with the Sawyer family — Drayton the Cook (Jim Siedow reprising his role as the maladjusted brother), Chop-Top (Bill Moseley as the Hitchhiker's twin) and "Bubba" aka Leatherface (Bill Johnson) — acting even zanier and over-the-top than previously remembered.

Picking up a few years after its predecessor, the family eluded capture by taking refuge inside an abandoned amusement park, which is elaborately ornamented by the bones and other leftovers of their victims, similar to the first movie. Unlike the original, however, the uniquely scintillating set design participates in generating more laughter than scares, expanding the graphically horrid shocks into a schlocky funhouse sensibility thanks to the stunning special effects by legendary make-up artist Tom Savini. Working from a script by L.M. Kit Carson (Paris, Texas), Hooper turns his original creation into a wickedly, ultra-black dark comedy, showing that he has a sense of humor about the vehicle that brought him recognition. Simultaneously, the movie also works as though he were blowing off some pent-up steam and frustration at the expense of his own creation and with the Hollywood system as a whole.

The Texas Chainsaw Massacre 2 is a twisted, farcical satire of itself, its memory and its impact on the horror genre in general while displaying some social commentary intuitiveness. Bespattering the screen with the same vividly excessive violence that was becoming typical of the genre at the time and possibly even of the 1980s as a whole, the sequel is an awesome, offbeat gonzo absurdity that still delivers the shocks along with the schlocks in equal measure. 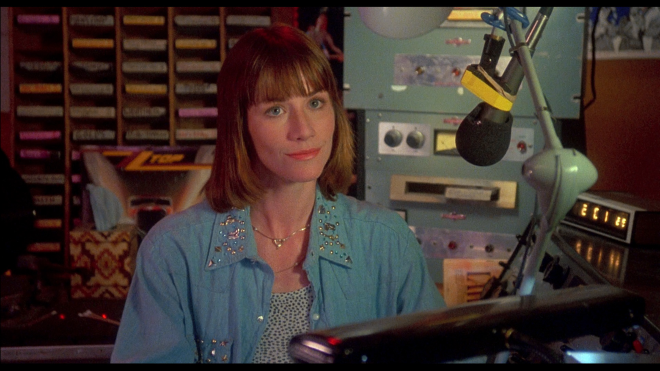 For a more in-depth take on the film, check out our review of the 2016 Collector's Edition Blu-ray HERE.

Vital Disc Stats: The Blu-ray
Imported from Germany, Turbine Media Group brings Tobe Hooper's The Texas Chainsaw Massacre 2 to Blu-ray as a standalone single disc. The Region Free, BD50 disc is housed inside a clear, eco-elite keepcase with reversible cover art. At startup, viewers are taken to a screen with full-motion clips, the usual options along the bottom and music playing in the background. For the more enthusiastic cult collector, Turbine also offers three other editions to choose from: a SteelBook, a DigiPack and really awesome VHS Retro edition. All three can be purchased from their website HERE. 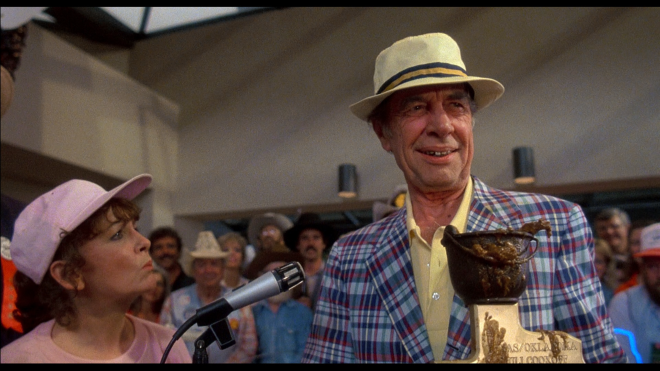 The cannibal family terrorizes Blu-ray once again, revving its chainsaw with what appears to be the same source used for the MGM and Arrow Video releases nearly ten years ago. Only, the folks at Turbine have restored and remastered those elements for a highly-satisfying 1080p/AVC MPEG-4 encode, making it an improvement over MGM and closer to the outstanding Arrow box set.

Compared to Scream Factory's 2016 package, this edition is a also step above, showing a warmer color palette overall with a more vibrant selection of secondary hues and richly saturated primaries. Facial complexions appear healthy with a natural rosy peachiness in the skin tones, exposing minor wrinkles and negligible blemishes in the entire cast. Fine lines and objects are highly detailed for a majority of the runtime, exposing every nook and cranny of the Sawyer amusement park home. The stitching in Leatherface's mask and the various costumes is discrete, and the gruesomely gory practical effects are distinct. Contrast balance is stable and spot-on with crisp, clean whites throughout, and black levels are incredibly rich and inky. Except for a couple instances of mild crushing while in the Sawyer home, visibility in the darkest shadows is excellent. Awash in a well-defined layer of natural grain that's consistent, the 1.85:1 image looks great with a strong cinematic appeal. (Video Rating: 82/100) 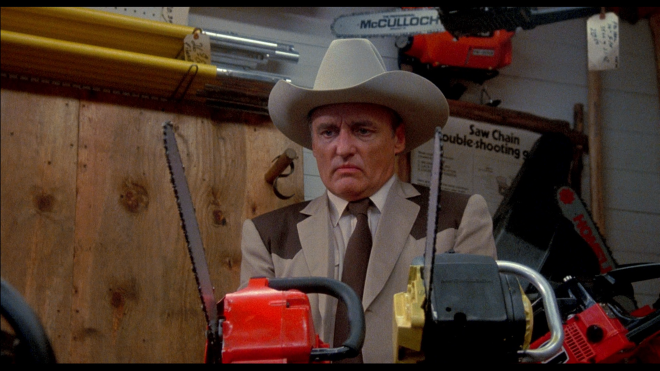 Similar to the Scream Factory release, this Turbine edition of the cult black comedy favorite arrives with a pair of excellent DTS-HD Master Audio options: a closer-to-the-original two-channel stereo or an upmixed 5.1 surround sound version. Owners can't go wrong with either choice, as they both have their strengths.

As should be expected, much of the attention is spread across the fronts, displaying good balance and channel separation while generating a broad and welcoming soundstage with constant off-screen activity. A dynamic and extensive mid-range allows for appreciable distinct clarity in the screeching roar of the chainsaws, particularly when Leatherface is grinding against metal or participating in a swordfight against Lefty. Amid the manic silliness, vocals are distinct and precise in the center, and a palpable low-end provides substantial weight and presence to the action sequences while also supplying a tight, punchy bass to the many awesome 80s tunes. When applying the receiver's Dolby Surround or DTS: Neural:X up-mixing functionality to the 5.1 option, the lossless mix remains a front-heavy presentation, but the music and a few minor atmospherics subtly bleed into the sides and the front heights without feeling forced or artificial, making for a very satisfying listen. (Audio Rating: 78/100) 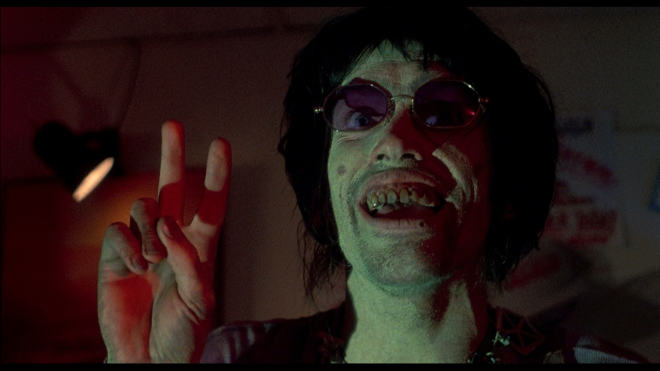 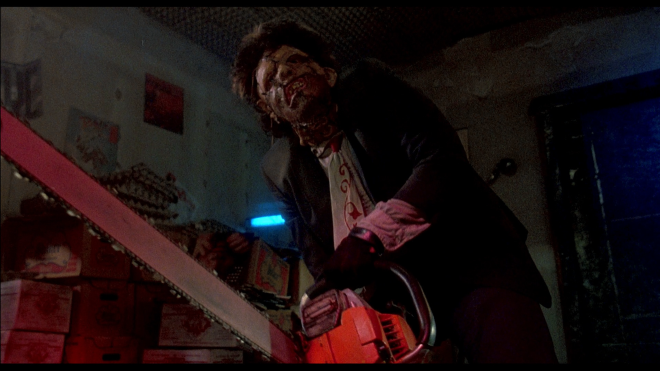 Twelve years after the first movie, Tobe Hooper returns to the film that put him on the map but takes the sequel in a different direction. The Texas Chainsaw Massacre 2 is a twisted, gory farce that is bonkers, wacky and downright gonzo. The horror black comedy darkly satirizes its legacy, the graphic explicitness of the horror genre and the 80s culture of living in excess. The standalone Blu-ray terrorizes with an excellent audio and video presentation, which fans will find thoroughly satisfying. With a great collection of supplements to keep horror hounds busy, the overall package is a recommended must for any cult collector’s library.