Carl Kolchak has an eye for news and a nose for trouble in Kolchak: The Night Stalker. Never content with the official story, he likes to dig a little deeper and inevitably discovers something beyond reason in this series follow-up to The Night Stalker and The Night Strangler. The series stretched itself pretty thin, but it's still fun while lacking the freshness of the made-for-TV movie original films. Kino Lorber Studio Classics delivers the entire series to Blu-ray with a respectable A/V presentation and a host of excellent extra features. Recommended

Carl Kolchak (Darren McGavin), reporter, newspaperman with an eye and ear for the unexplained. As a reporter for the INS (Independent News Service), he may take orders from his boss Vincenzo (Simon Oakland), but he answers only his gut instinct for news. So when a story breaks and a weird and strange detail sticks out - Kolchak is the man to ask the questions and crack the case. Unfortunately, that nose for news often gets him in a lot of trouble with local law enforcement, not to mention the numerous creepy creatures that go bump in the night. 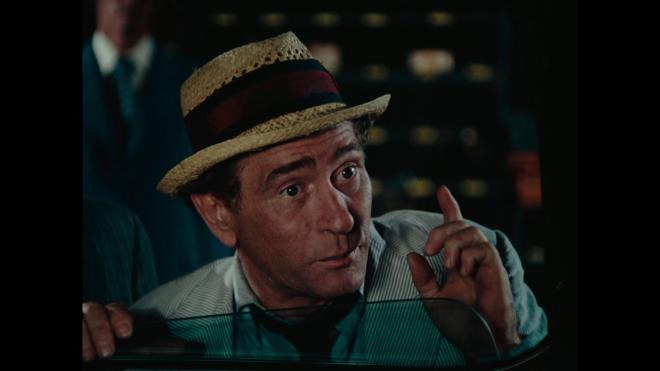 The Night Stalker and its sequel The Night Strangler were made-for-television gold. Two films featuring our star reporter played by Darren McGavin on the hunt for a creature of the night, finding the clues, and cracking the case all to get the exclusive report. While the first film was certainly better than the second, they’re both great examples of when television studios would invest real money into these productions and churn out a great product with smart scripts, production values, and a great cast.

It’s understandable they’d want to turn this into a regular event. But rather than continue with the format that worked as a special event TV movie of the week, they instead went down the series route. While Kolchak: The Night Stalker is a lot of fun, you can feel how thinly stretched the production became. There are classic episodes like The Ripper, The Vampire, and Chopper, there are some dreadful clunkers like They Have Been, They Are, They Will Be… or Primal Scream - 20 episodes was just too much of a good thing. By the end, the cast and crew were fraying to the point even McGavin demanded to be let out of the show. They should have stuck with the movie-of-the-week format. Episodes that are great run far too short, and bad episodes run on and on. In some later episodes, you can see McGavin is well past losing his patience. When the show was at its best you get some great thrills and chills with a lovely macabre sense of humor.

Often credited as a precursor and inspiration for The X-Files, it’s not a stretch to draw that connection. Carl Kolchak has a lot in common with Fox Mulder - it’s the format of their shows that allowed for different explorations of the paranormal and supernatural. The X-Files had a story throughline about the Government's conspiracy to shield the truth about the existence of aliens. There was a reason for one episode to exist after the next. Kolchak doesn’t have that benefit. Each episode is essentially the same only set up with a different creature. Carl finds a weird story, investigates, ticks off local law and his boss, and then the thing resolves itself often without Carl being able to actually write the story he’s working on.

As uneven as the television show ultimately was, it was still a good time. Over the years I’d pick through this show when it was on television or checked out the discs here and there and it’s nice to finally have it on Blu-ray alongside the television films KLSC released a couple of years back. Even when the show is at its worst, it’s good for background noise while you’re working. When it’s at its best, it’s perfect for these cold stormy fall nights to curl up with and turn out the lights. 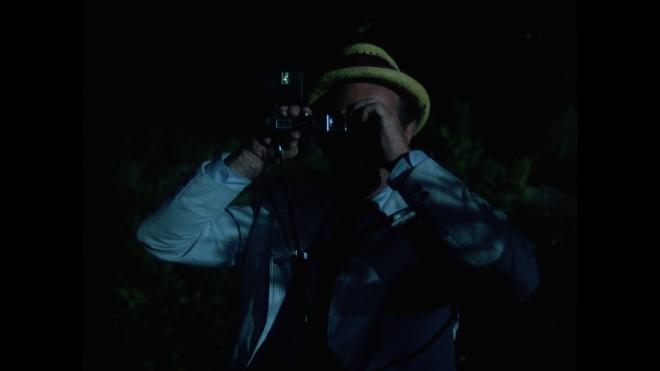 Vital Disc Stats: The Blu-ray
Kolchak: The Night Stalker the complete series arrives on Blu-ray thanks to the fine folks at Kino Lorber Studio Classics in a deluxe four-disc set. Spread out over two Region A BD-50 discs, the discs are housed in a sturdy 4-disc case with an identical slipcover. Each disc gets its own tray without being stacked. Also included is a booklet containing essays, interviews, and an episode guide. Each disc opens to a static image main menu with traditional navigation options. 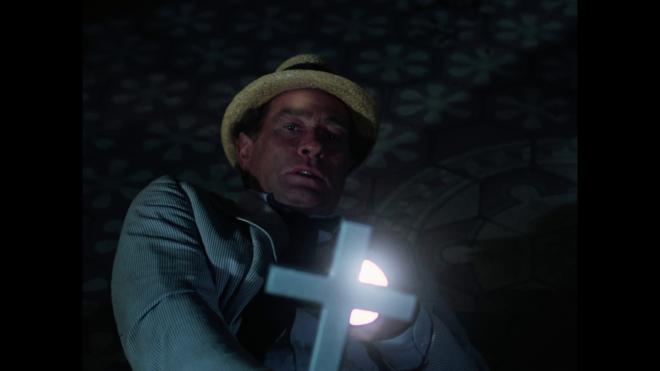 Each episode is presented in its original broadcast 1.33:1 aspect ratio in 1080p. While overall solid and a notable step up over the old DVDs, each episode’s transfer is a bit of a mixed bag. Depending on where, when, and how the episode in question was shot, quality can range from exceptional to a little rough. This show was notoriously cheap and in some episodes, that strain shows on its sleeves. One scene can look picture-perfect, the next could look like an SD insert, only it’s not because the density and clarity of film grain suggest otherwise. The majority of the time the show looks great offering nice clean details with bold colors, and a natural-looking grain structure, it just can be inconsistent depending on the episode in question. 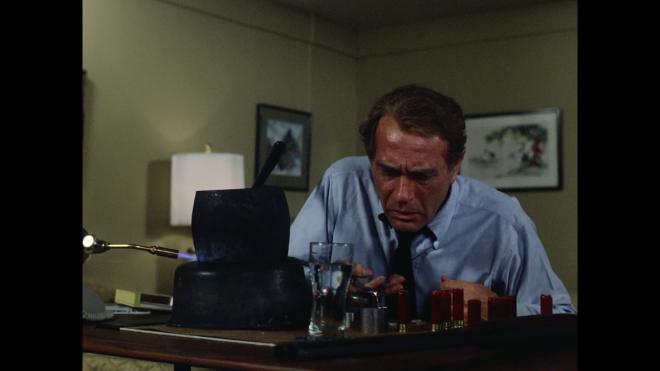 The opening credits sequence has always been a pretty ugly affair so don’t let that discourage you. Most of the 20 episodes look pretty damn good for a show that’s nearly 50 years removed from its broadcast date. The roughest patches highlight some speckling and soft-focus issues. It’s worse when stock footage is used because the shots obviously don’t match. Actual Chicago footage peppered throughout the show is also pretty rough since it was largely shot by McGavin on his own and it looks like they didn’t have a permit because some shots of McGavin in some iconic locations look like the camera was set up in the bushes somewhere. Shots of him on the train look like how we would shoot our student films on the CTA with the Bolex in our backpacks hoping no one would notice or report us. A lot of episodes were shot at night and the black levels are usually pretty tight and inky, but again, depending on some of the locations some crush does creep up, but nothing too serious. All around this looks pretty darn good. Not as great as the previous solo film releases KLSC put out but pretty good for 70s television. 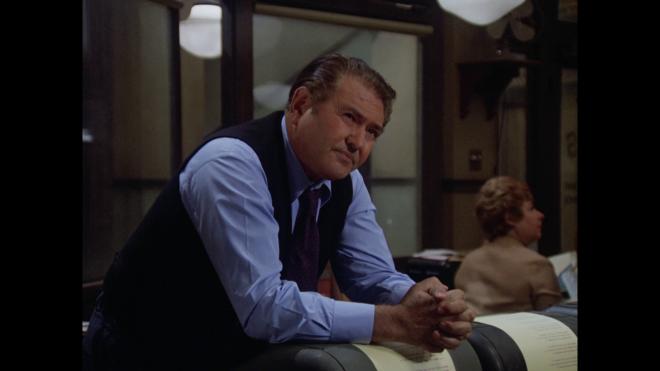 The good news here is each episode earns a tight and consistent DTS-HD MA 2.0 mix to enjoy. Dialog is clean and clear without issue. Scoring has that 70s canned quality to it but is lively enough. Sound effects can be a bit restrained in places depending on the studio set used - more open and scenic locations sound the best where the studio city backlot set can be a bit hollow. Free of any hiss or age-related issues the tracks are in good shape. 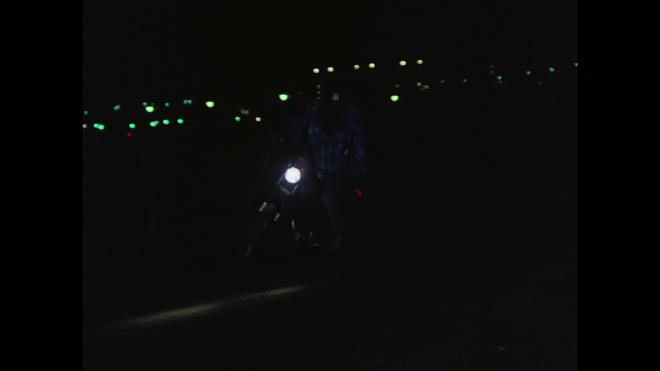 KLSC doesn’t slouch in the bonus features arena. On top of new interviews with various personalities including writer David Chase, you get 21 audio commentaries for all 20 episodes. Most of these are of this historical and anecdotal sort, but they’re all worth listening to if you get the chance. I picked through them as work background material and I frequently found myself not working and watching the episodes in question all over again. 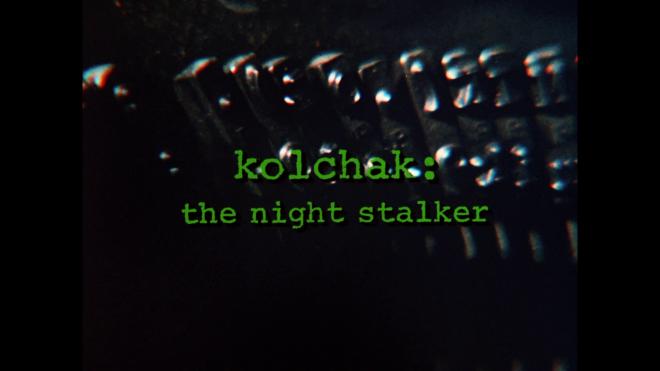 Kolchak: The Night Stalker is a fun show. Not as great as the television films that spawned it, but still fun. Had the show enjoyed a bigger budget and a shorter episode run, it might have worked. Better would have been to keep going with the big event movie-of-the-week format The Night Stalker and The Night Strangler enjoyed. Now nearly 50 years removed from its original air date - there's a piece of me that would like to see a new take on Kolchak emerge. It'd be a tall order to find someone other than McGavin for the part, but the character is so much fun, we could use that take on sci-fi/horror.
Kino Lorber Studio Classics gives us the complete run of Kolchak: The Night Stalker on Blu-ray for the first time. The image transfers are pretty good for each episode, but the film's cheap and speedy production issues lead to so some rougher moments. When it's great, it looks amazing. Audio is in solid shape and KLSC has assembled a terrific assortment of bonus features to pick through. If you're a fan, it's a fun show to have in the collection. Recommended.