Beavis and Butt-Head Do America

It’s a shame that two of the greatest high-brow intellectual characters of a generation only made one film, but finally, Beavis and Butt-Head Do America scores on Blu-ray for the first time. Thanks to Paramount Home Entertainment, Mike Judge’s hilarious cinematic outing of the classic MTV animated series comes home with a fitting 1080p transfer, great audio, and some decent archival bonus features. The film is just as funny as ever make it a welcome addition to the collection. Recommended.

Is a man really a man without his television? For Beavis and Butt-Head (Mike Judge) television is all they have. Their window to the world, their source for all knowledge… and music videos. When their television is stolen they quest to find a replacement. When that quest crosses paths with Muddy Grimes (Bruce Willis), the boys have their first real chance in their lives to score when they’re hired to “do” Muddy’s wife (Demi Moore) for $10,000. They will travel the country for this quest to score and television - with an entire division of federal agents trailing their butts.

As a kid of the 80s, television changed a lot in my time. God that makes me feel old as hell, but as someone who lived through the Satanic Panic, the rise of the violent and disrespectful creature Bart Simpson, TV did change a lot. So many shows got the sniveling child protection groups all up in a huff in my time it’s hard to keep track of - but Beavis and Butt-Head was a memorable debut in 1993. Between the crude animation, the toilet humor, the sex gags, and a few incidents of arson, the two dumbasses were the cause of a lot of television punditry right up to the release of their one and only cinematic outing Do America. Little did anyone know South Park was to arrive a year later! 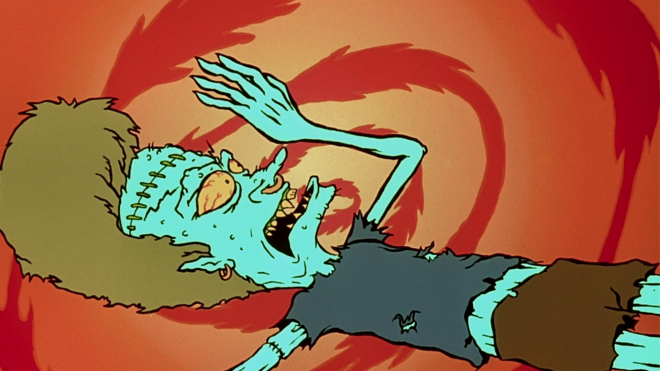 This was a show I wasn’t supposed to watch - but I did anyway often having to sneak out of bed late at night avoiding all of the creaky floorboards in the steps just to get to the lone television in the house with a satellite box. I loved the show, and I loved the movie and for how stupid it all is - it still makes me laugh to this day. Even I admit that it's odd to speak of the show as intelligent but Mike Judge hit on the comedy of impressive stupidity. Some folks want to delude themselves that there aren't actually people like Beavis of Butt-Head out there, but just pull up any fail video on YouTube and you'll see that Judge's crudely animated dopes aren't far off the mark. 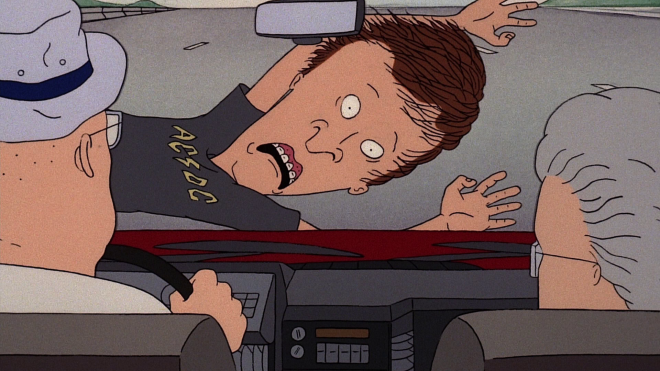 Beavis and Butt-Head Do America is a riot from start to glorious finish. In addition to Mike Judge, there’s an amazing voice cast throughout the film including Richard Linklater, David Letterman, Eric Bogosian, Cloris Leachman, Greg Kinnear, and a genuinely hilarious turn from Robert Stack. Judge takes the classic road trip comedy and spins it on its head with the two loveable idiots taking in the sights - with a couple of appearances from The Great Cornholio himself! After not seeing this movie for several years I was damned happy to see it still holds up and all the same dumbass humor still makes me crack a smile like a sixteen-year-old idiot all over again.

Vital Disc Stats: The Blu-ray
Beavis and Butt-Head Do America arrives on Blu-ray in a single-disc Blu-ray + Digital set from Paramount Home Video. Pressed on a BD-25 disc, the disc is housed in an eco-friendly keepcase. No slipcover was given for our review copy, so I’m not sure if that’s an option if you find this in the wild. The disc loads to a basic static image main menu with traditional navigation options. 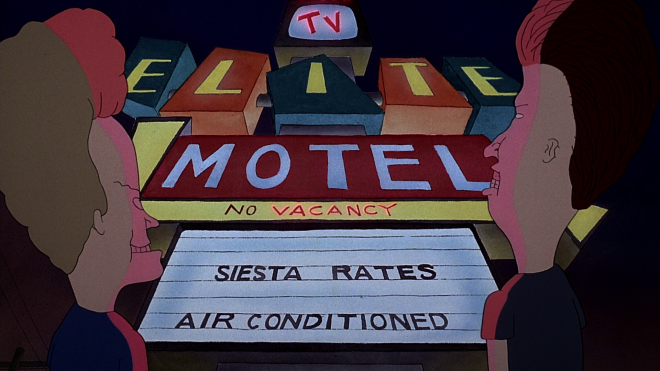 Beavis and Butt-Head Do America scores with a 1080p 1.85:1 transfer that handily outpaces the old DVD. Colors pick up a little extra saturation for more natural and dynamic primaries - Blues and Yellows in particular gain a richer presence. Given this is cel animation - and one of the last feature-length films made without a ton of extra CGI assistance - I was most impressed with the uptick in details. Lines are cleaner and clearer than ever. You can even spot some slight grit between the cels every now and again. The image also hasn’t been scrubbed out with DNR as there’s still plenty of natural film grain left. This was never an amazing-looking show or film, the charm was the rough animation style like someone doodling on all of the pages of their notebook in class and this transfer preserves that aesthetic nicely. 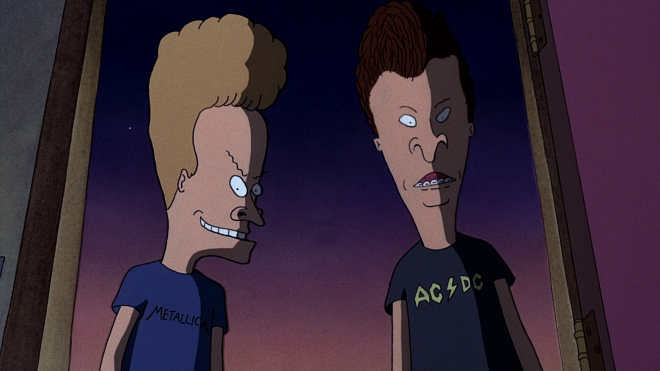 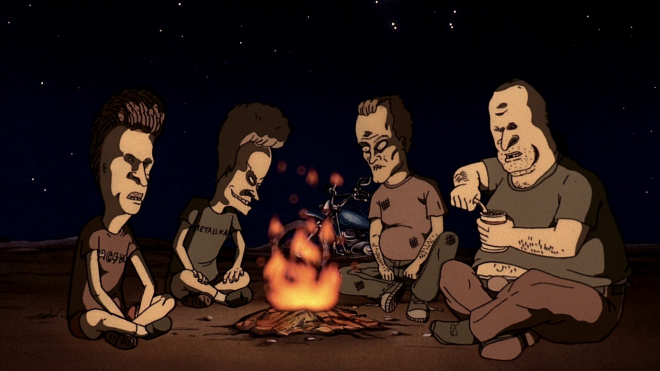 The big gain in the A/V department for this one is the lossless DTS-HD MA 5.1 mix. Considering the film, I was expecting it to be mostly front/center heavy - and would have been perfectly fine with that. But I was very happy to hear the surrounds get plenty of activity with the sounds of traffic, helicopters, ATF agents, filling out the soundscape. Music sequences like Red Hot Chili Pepper’s “Love Rollercoaster” or Rob Zombie’s animated hallucination sequence “Ratfinks Suicide Tanks and Cannibal Girls” really kick the subs! Of course, "Lesbian Seagull" is the highlight tune of the entire film. Dialog, such as it is, comes through without issue and some particularly choice sound effects come through just fine. 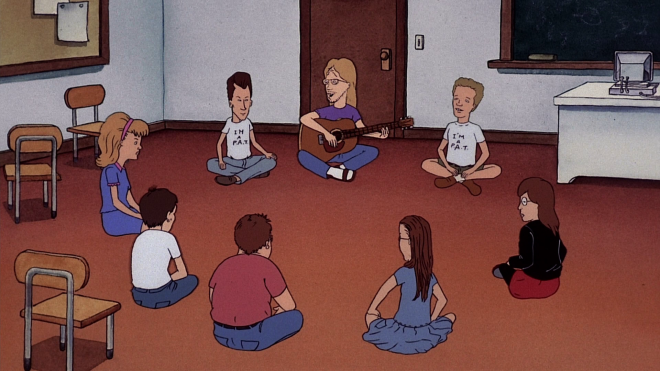 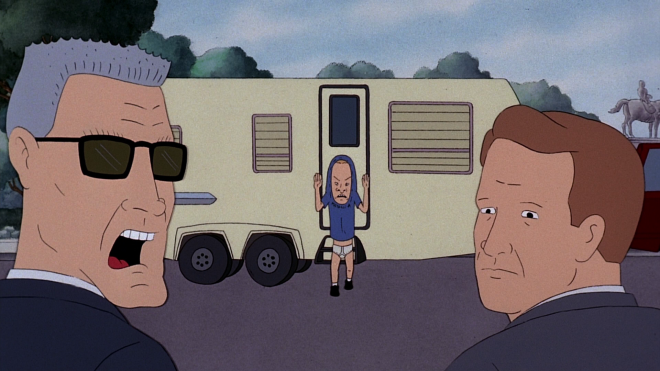 Nothing new was added to the mix here. All of the bonus features here are carryovers from the old DVD. The Mike Judge and Yvette Kaplan commentary is a great listen if you haven’t dug through it already. 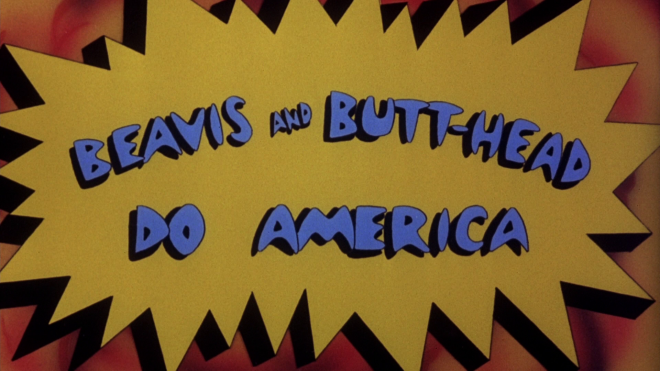 Beavis and Butt-Head Do America may not be the greatest comedy, but it’s damn funny when you need some genuine turn off your brain hilarity. Sure, the gags and humor is dumb as hell, but that’s the point. As with so many of Mike Judge’s comedies, he was ahead of the curve in a lot of ways. This film may be 25 years old, but it’s still a gutbuster all the way through. Paramount Home Video finally brings this flick to Blu-ray with a worthy A/V presentation and the previous bonus features. Now if we could get the entire original series on Blu-ray too - that’d be something! As it stands for this solo film outing, if you’re a fan go ahead and add it to the collection. Recommended.