Ralph Kramden (Jackie Gleason) is a New York bus driver who dreams of a better life. With his eccentric good friend, sewer worker Ed Norton (Art Carney), Ralph constantly tries crackpot schemes to strike it rich. All the while, his exasperated wife, Alice (Audrey Meadows), is always there to bring him down to earth or to pick him up if he beats her to it. For as much as they fight, even dunderhead Ralph knows that she is the greatest and vice versa.

The lasting influence of 'The Honeymooners' extends far beyond Jackie Gleason's oft quoted role as the cantankerous Ralph Kramden, or even Art Carney's oft-imitated meandering, seemingly dull-witted cadence as Ed Norton. It is the sitcom many people think of as the progenitor of several TV tropes, or what might be considered clichés of the genre (the idea of a rotund, ill-tempered man with a low paying job having an incredibly attractive wife being primary among them). But it is also the sitcom that would go on to inspire many more favorites like 'The Flinstones,' 'All in the Family,' and 'The Simpsons.'

While it is easy to recognize how 'The Honeymooners' genes have spread across the decades, and lingered to influence a great many other programs, that can sometimes make it too easy to ignore the innovative kind of program it was. Not only did it successfully make the transition from a popular sketch on Jackie Gleason's 'Cavalcade of Stars' and 'the Jackie Gleason Show,' it also made sure to give its protagonist a series of catch phrases that defined him, and, in turn, would serve as one of identifiers of the era for future generations to discuss and deconstruct. Kramden's belligerent attitude was exemplified on a near episodic basis, as he would look at his wife Alice (Audrey Meadows) – usually after she said something smart, or disapproving – and say, "Bang, zoom, straight to the Moon!" or "One of these days ... one of these days ... Pow! Right in the kisser!"  Of course, like any good couple (especially television couple) most of the time, Kramden would wind up looking at the same woman and be left saying, "Baby, you're the greatest."

In a sense, the characters of Ralph Kramden and his buddy Ed Norton were as deliberately uncomplicated as their futile attempts to strike it rich. Nearly every episode was, in either an overt or oblique way, about the characters' desire to leave behind the daily grind, to vacate their minuscule apartments, and to live a life of leisure, surrounded by material things, as evidence of their success. As such, 'The Honeymooners' was one of the ultimate television shows about the American Dream, especially as it pertained to the post war America, and the illusion of more, newer, better, as the defining motto of a generation. 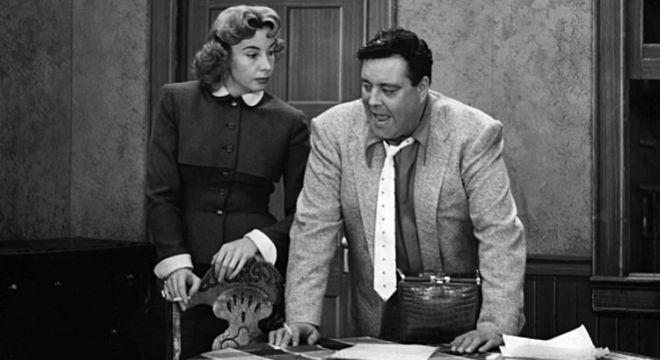 'TV or Not TV' the first episode on the five disc collection, containing the entirety of what is known as the "Classic 39" episodes, perfectly encapsulates the thematic essence of the series with a story about Alice's wish for a television set, and Ralph's "frugality" (i.e., pennilessness) that prevents them from having the things they most want. The impetus for Alice's wish is Norton's wife Trixie (Joyce Randolph), announcing that she and Ed are about to purchase their second set. Alice has a heart-to-heart with the seemingly heartless Ralph, pointing to the lack of furnishings in their two-room apartment, openly wondering when it will be her turn to experience what the Nortons seem to with frightening regularity. Not only does this establish a humorous critique of consumerism, and the need to be keeping up with the Joneses – or in this case, the Nortons – it is later discovered that Ed and Trixie only have these things because they were bought using that nefarious thing called credit. The commentary there is fairly straightforward, but never intended to lecture or scold in any way; it simply was.

The next episode, appropriately titled 'Funny Money,' is much in the same vein as the first. Ralph happens upon an unclaimed suitcase full of counterfeit mob money, and upon discovering he's flush, attempts to buy his and Alice's happiness, giving her all the things she could ever want, thinking nothing of the consequences of running out of money, or if it's even real. Ralph's in the middle of negotiating the purchase of a boat when he discovers the ship he thought had finally come in for him was as bogus as the promise of the American Dream in and of itself. The episode ends with Ralph calling the telephone company on one of the many lines he'd recently had installed to inform them the issue he'd complained about had been fixed – and to send someone around to disconnect all the lines.

That is a strange and downhearted way to end what is intended to be a comedy, but it was all part of what made 'The Honeymooners' work. These were people who represented the larger part of the population. Ralph and Ed both held down blue-collar jobs, while their wives diligently ran the home. They had money problems, they lived in small, cramped apartments during a time when success was largely measured by how far out in the suburbs you could get. It wasn't reality, per se, but it was close. And by making the all to familiar struggle of the Kramdens and the Nortons feel present and lived-in, it somehow made it okay to laugh, like life and success and the struggles inherent to both made it all one big joke anyway.

And that was a good portion of Gleason's charm; the ability to make his character the one you laughed at, not with, but still you somehow connected with him and understood his wants, even if his methods weren't what you might call inspirational. Being able to walk the line between loathsome and likable, the irascible Kramden set the standard for a particular set of sitcom characters for decades to come. And, like the character who made it famous, 'The Honeymooners' did much the same for the entire sitcom genre, by delivering the kind of monumental impact that is still felt today. Watching the show now, it's easy to raise an eyebrow at Kramden's utterance of "Pow! Right in the kisser!" but the series may still leave you saying, "Baby, you're the greatest." 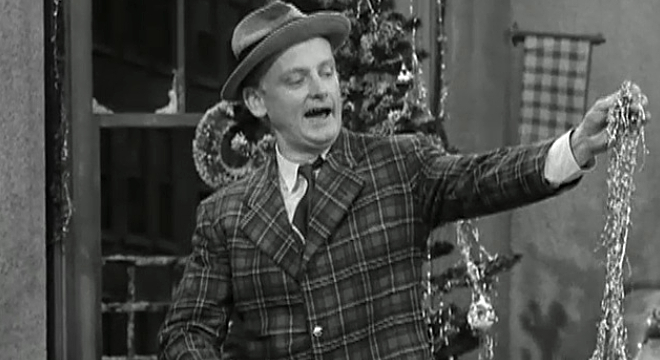 'The Honeymooners' comes from Paramount as five 50GB Blu-ray discs in an oversized keepcase. Each disc will go directly to the top menu, and give you the option to watch the series as a whole, or to pick and choose the episodes you'd like to watch. In addition to the special features littered throughout the discs, you can also choose to watch selected episodes with the original sponsor materials before the show begins.

'The Honeymooners' is presented in its original 1.33:1 format in a 1080p AVC/MPEG-4 encoded transfer that does a remarkable job in terms of added clarity, detail, and contrast. The image retains much of the original grain that would normally accompany a program as old as this, but it all helps establish a terrific sense of how long this series has been in the minds of viewers, as well as just how well the transfer looks, in comparison to the original broadcast, and subsequent releases on home video. While the detail isn't great by today's standards, it is quite impressive to see the level that the image is capable of producing. Some facial features are pronounced, and smaller, textural elements are mostly easy to spot and to pick out. Contrast is high throughout, though there are some washed out qualities to the opening credits. Still, the in-episode image generally produces terrific black levels on an impressive and rich grayscale.

Mostly, though, the quality of the image really allows the viewer to understand the kind of work that went into creating a sitcom in 1955, and how the actors and the camera tended to perform closer to a stage play, than a multi-camera production. This is close in quality to the image that was given to 'The Dick Van Dyke Show' which recently had all five of its seasons released on Bluy-ray. If you're a fan of 'The Honeymooners', then, the image here will likely please you.

'The Honeymooners' has been given a Linear PCM 2.0 mix that handles the very basic needs of the sitcom's sound design fairly adequately, but does tend to show its age when it comes to some of the tinny elements in some of the actors' speech. Otherwise, dialogue is quite distinct and easy to hear. Sound effects and music both sound fine – though there is little of both that have any real impact on any given episode – as they come through cleanly, but not with any real sense of emergency or energy. Atmosphere, too, is not much of a concern here, but the addition of the studio audience sound does help to give the mix some added depth.

The sound here is definitely above average for a series that is as old as 'The Honeymooners,' but it isn't necessarily primed to impress. It is important to note, however, that while the mix (naturally) isn't going to sound as robust as something even five years younger, there are no scratches or hisses anywhere in the audio. In that sense, the mix is pristine.

"Best Buick Yet" Dealer Presentation (HD, 21 min.) - Gleason pitches the '56 Buick, while a representative comes in to discuss all the technical sophistication of the vehicle.

60 Minutes' Jackie Gleason Profile (10//8/1984) (HD, 15 min.) – Morley Safer interviews Gleason in his home, as Gleason recounts the stories of his early days as a performer and the path he took to becoming Ralph Kramden and beyond.

60 Minutes' Jackie Gleason Profile Outtakes (HD, 22 min.) – These are just a collection of stories they couldn't fit into the original 15-minute segment. Unsurprisingly, some of the stories are a tad more mature, but certainly don't offer any sort of adult content.

American Scene Magazine: "The Adoption" (1966) (SD, 53 min.) - The entire 1966 episode with host Jackie Gleason, in which he is joined by Art Carney and Audrey Meadows, doing a musical comedy version of 'The Honeymooners'.

35th Anniversary Special (SD, 22 min.) – This anniversary special hosted by Audrey Meadows features interviews with surviving cast members, staff, and a look back at what made the series such a stand out in the first place.

50th Anniversary Special (SD, 42 min.) – Hard to believe that a Blu-ray release can have a 35th anniversary special and a 50th anniversary special, but here it is. This time, the special is hosted by Kevin James and features a more comprehensive look back at the series and its impact on sitcoms.

"Person to Person" Segment Featuring Jackie Gleason (2/3/1956) (SD, 11 min.) – In this 'Person to Person' segment, Gleason talks to a real bus driver and compares notes on how his daily routine and personality would either mix or clash with Ralph Kramden.

'The Honeymooners' was a highly influential sitcom that is likely still playing in reruns somewhere right now. Gleason and Carney would of course go on to do a great many things, but they will likely forever be remembered as neighbors Ralph Kramden and Ed Lilywhite Norton. Whether you’re a fan of the series from when it first aired, caught it in syndication, or would just like to experience it for the first time, this Blu-ray set will be a great addition to your collection. With great picture, above average sound, and some interesting special features, this comes highly recommended.

Sale Price 29.99
List Price 48.99
Buy Now
3rd Party 20
In Stock.
See what people are saying about this story or others
See Comments in Forum
Previous Next
Pre-Orders
Tomorrow's latest releases