Overview - Two young teens' real selves are invisible to others, one due to his untimely death and the other due to the neglect she's endured since the death of her mother.
OVERALL
Worth a Look

Most unusual for a teen horror flick in this age of remakes and sequels, 'The Invisible’ strives to be an oxymoron -- an intelligent supernatural chiller made for young adults. Although the film is not always successful in its narrative ambitions, despite its flaws, I personally found the originality of its vision largely compelling.

Based on the little-known novel "Den Osynlige" by Mats Wahl, the film stars Justin Chatwin ('War of the Worlds,' TV's 'Lost') as Nick Powell, a high school senior and aspiring writer who would seem to have a bright future ahead of him. That is, until he uncovers one too many secrets involving a crime committed by a gang of fellow students, led by resident bad girl Annie Newton (Margarita Levieva). Fearing he may rat her out, Annie orchestrates a brutal attack, and Nick is left for dead.

It is here that 'The Invisible' takes a detour from the usual cliches of teen horror movies. Instead of Nick rising from the grave like a zombie to avenge his murder, or turning all 'Carrie'-like and blowing up his prom, the film switches gears and becomes something of a meditative drama, with Nick waking up to find himself trapped in a ghostly limbo where no one can see or hear him -- not his family, including his strangely aloof mother (Marcia Gay Harden), nor his duplicitous "best" friend, Pete ('Joan of Arcadia's Christopher Marquette). Instead, in an ironic twist of fate, Nick discovers his only spiritual connection is with Annie, whom he will he will have to persuade to turn herself in, if he is to have any hope of salvation.

As a thriller, 'The Invisible' is not particularly successful. The premise has an intriguing, 'Twilight Zone'-like complexity to it, but the script (by Christine Boum and Mark Davis, veterans of episodic TV including 'CSI' and 'Cold Case') is often convoluted and weighed down by an over-reliance on exposition, flashbacks within flashbacks, and jarring dream sequences. Further undermining confidence in the storytelling is that the audience is usually either two steps behind or two steps ahead of the characters in deciphering the clues, making it hard to muster up much enthusiasm for the film’s climactic reveal.

Still, 'The Invisible' worked for me, largely due to the fact that it explores a common, albeit morbid, teenage fantasy -- that of imagining our own death. As Nick haunts his own reality, the story crosses over into the realm of the existential, and it is here that the film can be fascinating, arguing that taking responsibility for one's actions is the key to redemption. Rare for a teen genre film, 'The Invisible' never sacrifices insight for cheap thrills, painting its young characters (and the adults, too) as three-dimensional people with recognizable human fears and anxieties.

'The Invisible' was directed by David Goyer, whose only previous theatrical release was the sequel 'Blade: Trinity.' This is a far superior effort that suggests even better things to come. The film also benefits from effective cinematography by Gabriel Beristain ('Dolores Claiborne'), an evocative score by Marco Beltrami, and fine performances all around. Ultimately, its pleasures may be small ones, but there are enough of them here that (in my eyes, anyway) 'The Invisible' rates as something of a sleeper. In this day and age of cynical "re-imaginings" and quickie cash-ins, that's something worth seeking out. 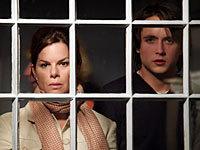 Disney presents 'The Invisible' in 1080p/AVC MPEG-4 video, framed in its original 2.40:1 theatrical aspect ratio. It is an extremely slick presentation that captures the film's moody (and often morose) cinematography with great aplomb.

The film’s look is darkly stylish, with the transfer's deep blacks and well-modulated contrast coming across strongly. Colors are intentionally desaturated, with a heavy wash of blue filters that cast a cold, chilly pall over the proceedings. That doesn't help fleshtones (they never look natural), but the limited palette of crimson reds and forest greens can be quite striking. To its credit, the transfer also never falls into murkiness. Shadow delineation is particularly impressive, with detail and depth remaining strong throughout, even in the film’s darkest scenes.

Unfortunately, 'The Invisible' suffers from some of the harshest edge enhancement I've seen on a Disney title. Although the picture is incredibly sharp, halos are often apparent on hard edges. There is also a surprisingly amount of horizontal jitter; right from the opening scene, during a long pan past a large party table in front of a tall fence, the "moire effect" is highly distracting. Unfortunately I found this to be enough of a detriment that it knocks a good point off of the Video rating for me, even if most other aspects of the presentation are excellent.

Uncompressed PCM (48kHz/24-bit/6.9mbps) and Dolby Digital (640kbps) tracks are provided, both in 5.1 surround. 'The Invisible' is a largely subtle thriller, one that doesn't resort to over-the-top shock "stinger" effects and the usual sonic tricks. As such, it doesn't bowl you over with its aggressiveness, but it does have a fine attention to detail that creates a slow-building and effective atmosphere.

The film's sound design is often clever with its use of odd atonal cues, sustained ambiance and bleed of its alterna-rock songscore to flesh out the rear soundfield. It's not always powerful, but at a decent volume, it does add to the intended eeriness. Also a benefit to this more subtle approach is that it’s often hard to localize sounds, which results in a ghostly, floating quality that's a refreshing change of pace from the usual overbearing quality of most horror-thriller flicks. 'The Invisible' is also well-recorded, with a clean sound to the entire frequency spectrum and healthy low bass. Dialogue is well-balanced, and I encountered no volume level issues. 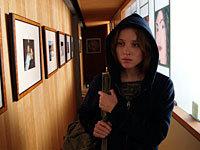 'The Invisible' was not a hit at the box office, which may explain why neither the Blu-ray nor the standard DVD (both hitting stores day-and-date) boast much in the way of notable extras.

With no documentary or other making-of footage included, it’s up to the two included audio commentaries to pick up the slack. In a strange configuration, director David Goyer and co-screenwriter Christine Roum are on the first track, while the film's other co-screenwriter Mick Davis gets the second track all to himself. In the end it’s a pretty frustrating decision, as both commentaries are fairly plodding and could just as easily have been edited into a more cohesive whole (what, do Roum and Davis hate each other or something?). As is, Goyer and Roum offer little in the way of actual on-set intrigue, focusing almost entirely on the story elements and film's visual style, punctuated by gaps of silence. Davis, meanwhile, doesn't add much that's of interest or isn't redundant. On the whole, only the most diehard fans of ‘The Invisible’ will find either of these tracks worth listening to.

The only other major extra is a collection of 13 Deleted Scenes that run about 14 minutes. Most of this material simply expands upon existing scenes, adding only tiny bits of character or backstory. Goyer and Roum again provide optional commentary, and the visual quality of this material is excellent, presented in full 1080p/AVC MPEG-4 video.

Next up are what's billed as two music videos on the packaging: a live version of "The Kill" by 30 Seconds to Mars and "Taking Back Control" by Sparta. The first clip will be of particular interest to horror fans, as the band's Jared Leto has mentioned the song as being partily inspired by Stanley Kubrick's 'The Shining' (which was much more apparent in the orignal, non-live video version) and it's is actually a pretty good tune. (Note that the videos appear to output at 1080, though the quality is rather poor, so they clearly appear to be 480 upconverts.)

Finally, we have two theatrical trailers for 'Pirates of the Caribbean: At World's End' and 'Deja Vu.' Sadly, no trailer for 'The Invisible' is included.

'The Invisible' is an odd little supernatural thriller. It's not entirely successful as either an adolescent drama or as a mystery, but I found it intriguing nonetheless. This Blu-ray release will certainly please fans of the film, thanks to its strong transfer and soundtrack, and even a few worthwhile supplements. Although I can't wholeheartedly recommend 'The Invisible,' this solid Blu-ray release is certainly worth a look if you're in the mood for something different.

Sale Price 9.96
List Price 15.99
Buy Now
3rd Party 3.05
In Stock.
See what people are saying about this story or others
See Comments in Forum
Previous Next
Pre-Orders
Tomorrow's latest releases