Jonathan Mostow’s abduction thriller Breakdown starring Kurt Russell, Kathleen Quinlan, and J.T. Walsh finally arrives on Blu-ray in the U.S.! This classic 90s thriller kept things old school without gassing up on big visual effects and instead focused on performance and a smart script to bring the thrills and chills. The 26th entry in the Paramount Presents line, the A/V presentation is excellent and comes with some impressive new bonus features. Recommended

Moving across the country is never easy. For Jeff and Amy Taylor (Kurt Russell and Kathleen Quinlan), life is already on a shoestring budget as they’re set to start new jobs in San Diago. Then inexplicably their new Jeep decides to die on an open stretch of desert highway. When friendly truck driver Red (the late great J.T. Walsh) arrives to help, Amy accepts a ride to a diner five miles down the road. Discovering his vehicle had been tampered with, Jeff fixes the problem and speeds off to collect his wife. Only his wife never made it to the diner. Desperate and without any help from police, Jeff must track down the men that abducted his wife all on his own.

1997 was a great year for thrillers. The Game, L.A. Confidential, Donnie Brasco, and Lost Highway were just a few of the gems that came out that year. One that I feel often gets overlooked in that shuffle is the Jonathan Mostow and Kurt Russell team-up - Breakdown. Part The Vanishing, part Duel, Breakdown skims the line of the classic everyman thriller and the everyman action film. We have an average Joe (or average Jeff in this case) who is in way over his head. He’s more brain than brawn and is pushed to the point where he has to fight back. While the film has great action sequences, it’s focused on Russell’s performance to sell the suspense with J.T. Walsh selling the terror.

At just over 90-minutes, the film has a smart deliberate pace to it. It hits the gas and lets off teasing big action beats only to pull away and go in a different direction. Russell’s always been a capable performer, but I love him here as he’s delivering a genuine full-bodied performance. He’s always tensed up, his shoulders are never relaxed, on top of doing some impressive stunt work for the big action beats. He sells the desperate situation in a way I don’t think many actors could without appearing too overconfident.

J.T. Walsh was the perfect antagonist for Russell. Walsh was a genuine true character actor who could play anyone. He could be a sadistic army Sargent in Good Morning Viet Nam, a dopy lawyer in The Client, or he could steal the show delivering the best dialog scene of a movie he’s hardly even in like Outbreak. In Breakdown Walsh is absolutely menacing barely ever raising his voice. Hat tip to M.C. Gainey and Jack Noseworthy as the colorful minions. Kathleen Quinlan may not have enjoyed much screen time, but those precious few moments early in the film with Russell quickly established the chemistry necessary to make this whole situation believable. 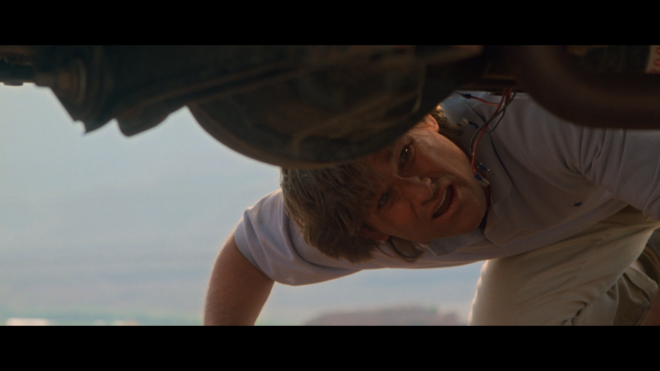 While I have a lot of praise to heap on the film, I recognize, it’s not perfect. The final act starts to feel a bit more like a mash-up of The Hills Have Eyes meets Mad Max. The chase sequence is certainly thrilling, but it’s a bit of a left fielder. Our band of villains has a clean deal they’ve been working because they go unnoticed by the police. This high-octane road carnage finale certainly gets the blood pumping but it feels more at home in a horror movie than the thoughtful, purposeful thriller we watched for the last hour. Obviously, some sort of final conflict had to happen, but the whole film up to that point was a case study in “less is more.” A little less would have yielded a whole lot more.

But if my only complaint about Breakdown is an action-packed finale that’s still pretty damn satisfying and entertaining, that’s really not a lot to complain about. Throughout, Mostow keeps the movie flowing, peeling back pieces of the plot onion until one hell of a reveal hits. The film may slip on some predictable genre conventions, but it also deftly dodges several others. The film smartly moves fast enough that the audience doesn’t get the time to think about this situation logically. You’re just pinned back in your seat hit with the same beats of adrenaline. If you skipped Breakout in theaters way back when or missed it when it was a VHS rental gem, now’s as good a time as any to catch up with it. 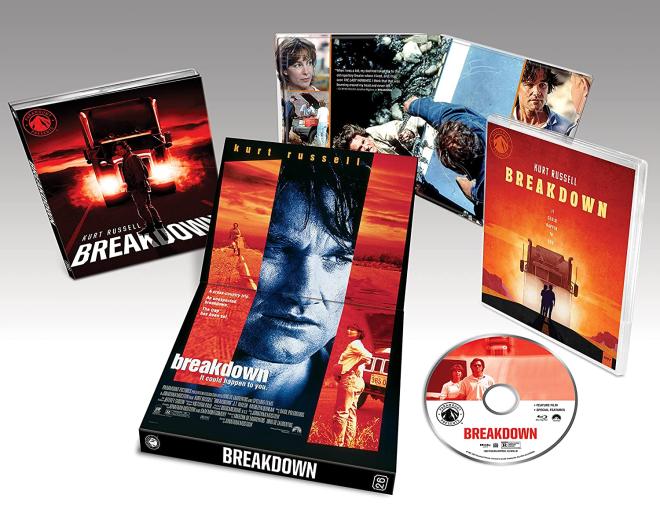 Marking its first outing on Blu-ray, Jonathan Mostow’s Breakdown is the 26th entry in the Paramount Presents line. This single-disc release with digital copy is housed in the standard clear case with slipcover that opens to reveal the far superior original poster artwork. The Digital copy redeems only through Paramount’s portal on either iTunes or VUDU and is not Movies Anywhere compatible. The disc loads to a static image main menu with traditional navigation options. 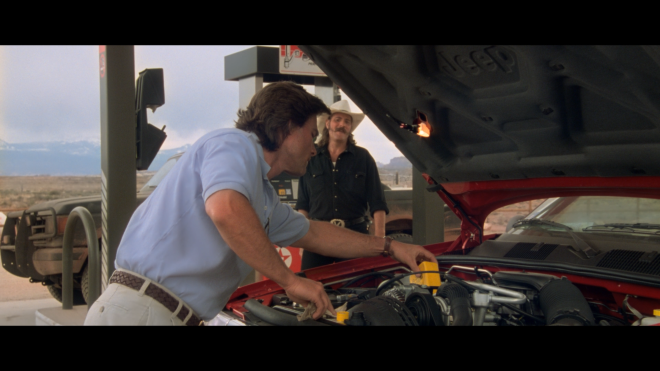 Breakdown starts up its first Blu-ray outing with an impressive 1080p 2.35:1 transfer. I haven’t watched this movie since the days of VHS - and even then I think the last time I saw it was on HBO or some other movie channel. This was released in Australia by [Imprint] - but I don’t have that disc to compare. My understanding is the same transfer for both films was used. Details can range from often strikingly detailed to softer than expected. The opening credits with the helicopter panning shot of the Jeep is a bit on the soft side. But when the camera moves into a closeup, you can spot the individual speckling of dust and grit all over the car. Facial features, slothing textures, and scenic desert locations afford plenty of minute details. Film grain is very fine and only really perceptible during later darker scenes during the climax, but there’s no sign of any kind of waxy smoothing or other compression issues. Colors favor the golden tones of the desert with pale blues and reds with stronger sandy browns and yellows. Black levels are strong, but there’s not a lot of room until the end for any deep shadowy sequences - most of the film takes place in the open sunlight with excellent image depth. Elements are in great shape without any sign of wear and tear. 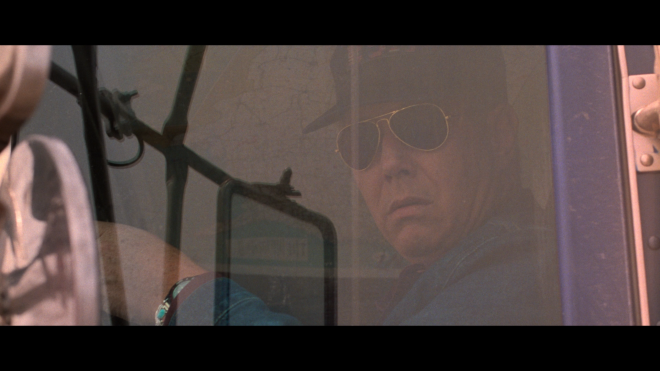 Breakdown comes with a terrific Dolby TrueHD 5.1 audio mix. Like the film, there’s a great balance with near silence and loud revving engines and action. When it’s quiet, there’s plenty of atmosphere and subtle surround effects helping build the tension. Louder action-packed sequences kick things up engaging all of the channels with terrific imaging - the river escape and the film’s climax are great examples. Throughout Basil Poledouris’s score helps prop up the suspense. I’ve always loved his work and this score is an understated delight considering he did Starship Troopers in the same year. Throughout dialog is never an issue and levels are spot on without any need for adjusting. 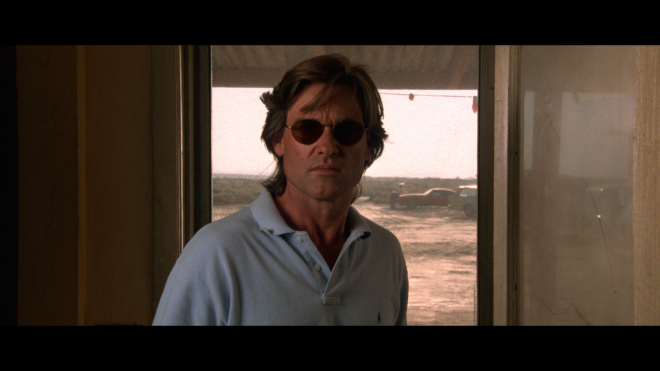 While the [Imprint] disc came with an impressive array of bonus features, this Paramount Presents disc is one of the few of the line that actually holds its own in this arena. In addition to the all too short Filmmaker Focus bonus, fans are treated to a slew of exclusive new features including an isolated Basil Poledouris score - the soundtrack is long out of print and a great listen. The original and very stupid alternate opening is included. There are new interviews with Kathleen Quinlan and Martha De Laurentis, but the best of the bunch is the Jonathan Mostow and Kurt Russell audio commentary. If you’ve ever heard Russell on a commentary with John Carpenter you know what you’re in for. This is a very engaging entertaining commentary packed with details about the film. Russell should just record commentaries for every movie he enjoys, he’s a lot of fun. 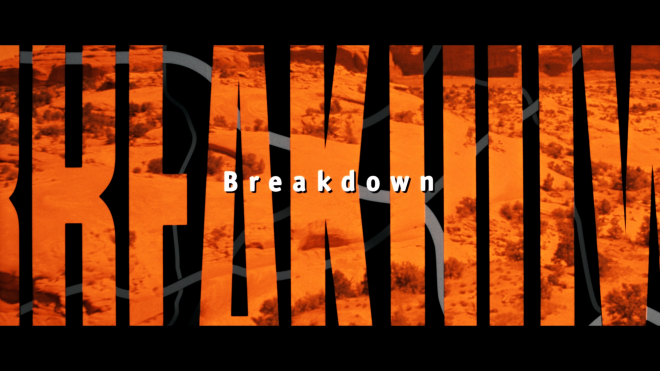 Breakdown is a solid mid-90s thriller with Kurt Russell delivering a hell of an everyman performance. The film did well enough in theaters and was a bigger hit on the rental circuit - but has been absent on HD in the U.S. until now. The 26th entry in the Paramount Presents line, Breakdown scores an excellent A/V presentation along with a terrific assortment of bonus features. A highly entertaining flick, it’s nice to finally have this one on disc and in the collection. Recommended.