I may have been outside the intended target audience for 'Pee-wee's Playhouse' when it originally aired in 1986, but it didn't stop me from watching the completely bonkers and wacky show every single week. Of course, being a huge fan of Tim Burton's absurdly silly 'Pee-wee's Big Adventure' was a massive help in my interest and decision to tune in when it premiered. In either case, what kept me coming back for more was the incredibly gonzo-like, gaudily flamboyant energy of each episode. It was unlike anything else on television at that time, the unconventional and bizarrely deliberate disregard for the standard children's program. Yet in its outlandish, off-the-wall way, the Saturday morning show managed to teach kids about ethical decision-making, moral behavior and about being more consciously empathetic towards others, especially those who are different and outside the norm, such as Pee-wee himself.

On the surface of it, there was something weirdly mesmerizing about a grown man-child playing with his seemingly cognizant toys or talking to his endlessly-building ants. The caterpillar-like octopus and the goldilocks Frankenstein doll were a particular favorite pair to watch because they were rather creepy, almost nightmarish for a children's show. It only grew weirder and more eccentric when the playhouse furniture talked and interacted with everyone else. Chairry and Mr. Window seemed innocent enough because they looked controlled by puppeteers, but Globey was a little on the freaky side for me. It might have had something to do with it the unexplained French accent and the puppet's odd mannerisms, compared to others. However, Conky 2000 was a funnily cool character, primarily for being in touch with the hip-hop culture and for providing the secret word of the day, requiring everyone to scream when it's said. 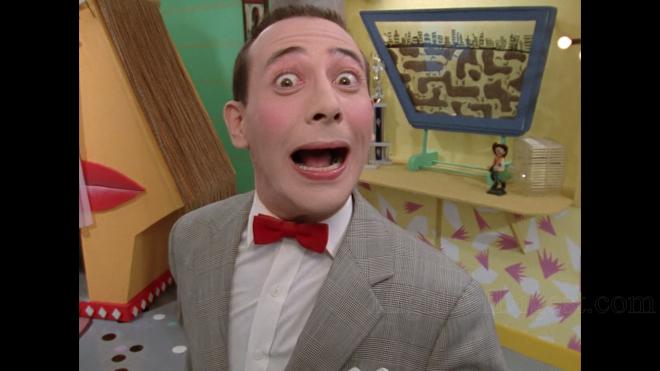 Certainly, there are a host of other disturbingly zany characters, like Magic Screen, Pterri, the red-headed marionette Randy, Cowntess, the jokester Knucklehead, the annoying salesman and the jazzing animal Puppet Band. Better still are the many human actors, some of which went on to become stars in their right but had their start with this particular show. The two most famous and recognizable faces are, without a doubt, Laurence Fishburne as the buoyantly upbeat and cheerful Cowboy Curtis and the quirkily funny Phil Hartman as the salty, grumpy Captain Carl, who only appeared in the first season. Then there's frequent visitor Miss Yvonne (Lynne Marie Stewart), the beauty-obsessed damsel that always garishly bright dresses. Arguably of more interest is seeing a very young Natasha Lyonne as one of The Playhouse Gang kids and a brief appearance by Jimmy Smits as the repairman, or knowing that Rob Zombie and John Singleton at one point worked on this particular production.

As 'Pee-wee's Playhouse' continued and grew in popularity, both with kids and adults, other celebrities would make brief cameo appearances, but most amusing is the fact that Mark Mothersbaugh, musician and co-founder of the awesome band Devo, worked on the show's score and created its memorable opening theme song. Many years later, 80s pop-star Cindi Lauper admitted to being the singer, which is both shocking and somewhat funny because I doubt anyone would have guessed that. Of equal interest are the clay animation sequences done by Richard Goleszowski and Nick Park, who later went on to create 'Wallace & Gromit' for the BBC. With so much going on for a half-hour series, it's no surprise the Saturday morning program, which is like a colorfully animated surrealist mishmash of 'Howdy Doody' and 'Captain Kangaroo,' entertained kids and has grown into a cult favorite amongst adults.

Shout! Factory brings 'Pee-wee's Playhouse: The Complete Series' to Blu-ray as an eight-disc box set. The Region A locked, BD50 discs are divided between two slightly thicker than normal blue cases with the first half containing the first two seasons while the remaining three seasons are spread across four discs in another blue case. The Christmas special is on the season three disc. They are all enclosed inside in a sturdy, colorfully vibrant cardboard box. At startup, each disc goes straight to a static menu screen with music and the usual options along the bottom.

The cult Saturday morning TV show screams, laughs and plays on Blu-ray with a shockingly good 1080i/60 encode, thanks to a meticulously restored and remastered transfer of the original elements, according to press material. The 1.33:1 image displays vivid, full-bodied primaries and bright, warm pastel hues, providing each episode with a spirited and energetic feel that's as visually entertaining as each wacky storyline. Adding to the animated picture is comfortably bright and well-balanced contrast levels while blacks are rich and true throughout. A very fine layer of grain is always present, and the video is terrifically detailed, exposing every sharp line and texture in the clubhouse, toys and Pee-Wee's unique outfit.

Like the video, the audio was also restored and created from the original elements. The end result is a very strong and entertaining uncompressed PCM mono soundtrack that delivers a decently wide but welcoming soundfield. Every zany and wacky sound effect is distinct and clear thanks to an extensive and dynamic mid-range with great detail and separation. The eccentric, carnival-like music, especially Mark Mothersbaugh's memorable intro, provides a good sense of presence and engagement. A few scenes even come with pleasantly weighty bass, mostly notably during the music. Vocals are pristine and precise in each episode, making the show a real joy to watch and relive.

Although I may not have been the intended target audience at the time, 'Pee-wee's Playhouse' fascinated me nonetheless due to the absurd wackiness and the show's carnival, gonzo energy. Paul Reubens may have been the star, especially for making the Pee-wee Herman oddly entertaining, but a large group of talented artists worked on the program to make it one of the most eccentric and memorable things on television. The Blu-ray from Shout! Factory features excellent picture quality and a very fine audio presentation for a TV show. With a host of informative and revealing supplements, the eight-disc box set of the complete series is recommended.

Sale Price 199.99
List Price 259.96
Buy Now
3rd Party 199.99
In Stock.
See what people are saying about this story or others
See Comments in Forum
Previous Next
Pre-Orders
Tomorrow's latest releases