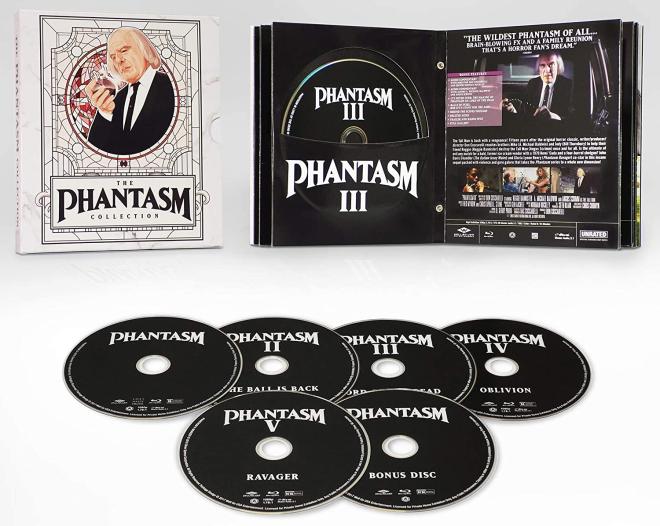 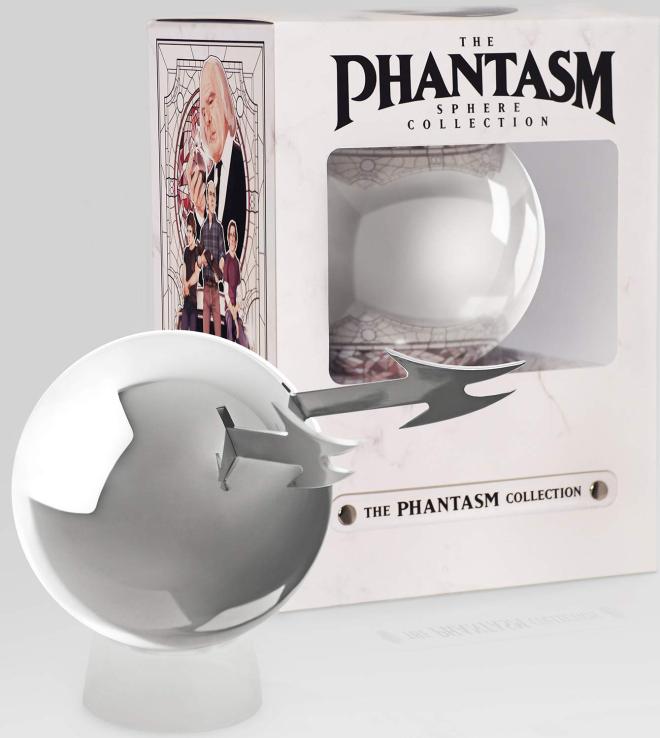 The new limited-edition collection of the classic Phantasm films includes a scale-replica of the Phantasm sphere. This sphere was sized to the exact measurements of a screen-used prop in Don Coscarelli’s personal collection.
The Phantasm Sphere Collection also debuts a new 4k scan from the original camera negative of PHANTASM II. For the first time ever, this new transfer of Don Coscarelli’s director’s cut includes the never-before-seen X-rated sphere/gore sequence banned by the MPAA at the time of it’s theatrical release. Coscarelli supervised and approved this new transfer. Experience PHANTASM II like never before.

PHANTASM III: LORD OF THE DEAD
Special Features: Audio Commentary with director Don Coscarelli and editor Norman Buckley - Audio Commentary with actors A. Michael Baldwin and Angus Scrimm - It’s Never Over: The Making of Phantasm III: Lord of the Dead – Balls of Steel–Bob Ivy’s Stunt for the ages - Behind the Scenes Footage – Deleted Scene and more…

Angus Scrimm (1926–2016)
Actor Known for Phantasm (1979), Phantasm III: Lord of the Dead (1994), John Dies at the End (2012), Phantasm II (1988) I might never have done a horror characterization had Don Coscarelli not offered me the Tall Man, he says. Don had the perception to see me in a role which was a total departure from my previous work. Scrimm’s success in the Phantasm films was parlayed into numerous other malevolent roles including, the evil Dr. Sin Do in The Lost Empire, Vlad the Vampire King in Subspecies, and as the nefarious Dr. Lyme opposite Nicolas Cage and Charlie Sheen in Christopher Coppola's Deadfall. Scrimm did intriguing double duty as the diabolical Seer and the angelic Systems Operator in Mindwarp, co-starring Bruce Campbell. He was also seen in The Severed Arm, Curtis Hanson's Sweet Kill, Scream Bloody Murder, Chopping Mall, and did a shock cameo in the Italian film Fatal Frame, opposite Christopher Lee and Donald Pleasance. Several years ago Fangoria Magazine (circulation 200,000 horror movie fanatics) inducted Angus Scrimm into the Horror Hall of Fame, alongside the likes of Stephen King, Vincent Price and Anthony Hopkins. The response to Scrimm's efforts in the Phantasm film series has been overwhelming. His role as the infamous Tall Man has earned him the praise of critics world-wide, as well as a large following of fans. I am continually amazed that the fans have so much affection for a such a dark character whose trade is essentially death, Scrimm once related. He credited this to the wry humor of creator Coscarelli's films. Audiences enjoy laughing with the Tall Man as he does his appalling deeds.

Reggie Bannister Actor | Producer | Music Department
Reggie Bannister who portrays the intrepid ice cream vendor in the Phantasm films was raised in Long Beach, California with a strong love of acting and music. After serving in the Vietnam War, Bannister joined the musical group Stone Country, performing with them in concerts and on television. He was also a founding member of the Greenwood County Singers alongside noted composer/producer Van Dyke Parks. In the early 70's Mr. Bannister returned to college to study music theory, but instead became actively involved in theater and film. This led to key acting roles in Don Coscarelli’s first three films, Jim The World’s Greatest, Kenny & Company and Phantasm. Bannister created the iconic role of Reggie in Phantasm, and it remains his most well-known work, making him a much-in-demand guest at fantasy and horror conventions. With the success of Phantasm, Bannister’s acting career took off and he appeared in dozens of projects as diverse as L.A. Law, The Wishmaster and several other films directed by Coscarelli. Reggie currently is partnered with his wife, Gigi Fast Elk, in their own production company, Production Magic, Inc., which is involved with live concert, event promotion and film projects. Please visit reggiebannister.com for information about Reggie's upcoming appearances.

A. Michael Baldwin Actor | Producer | Writer
A. Michael Baldwin began his professional career as a successful child actor appearing in television shows such as Sesame Street, The Electric Company, Starsky & Hutch, and Eight is Enough. While his most recognized role was starring in PHANTASM and its successful second sequel, PHANTASM III, Baldwin has acted in numerous commercials, television episodic and feature films. In addition to reprising the role of Mike in Phantasm: Oblivion, Mr. Baldwin also served as the Co-Producer of the film.