Based on Jay Cronley's novel Good Vibes, the criminally forgotten Let It Ride remains a wildly entertaining comedy farce about a habitual gambler's extraordinarily lucky day and starring a memorable Richard Dreyfuss. Courtesy of [Imprint] Films, the underrated gem arrives on Blu-ray with a good audio and video presentation and a decent set of exclusive bonuses, making the overall package Recommended for the curious.

These are the highs and lows of unbiasedly watching every title that lands on my plate. For every excruciatingly dull trek like Final Fantasy VII, a surprisingly good movie is bound to come along and wash away the terrible aftertaste. This time, that movie happens to be the sadly underrated and largely forgotten Let It Ride, a comedy farce about a habitual gambler's extraordinarily lucky day at the racetracks. Granted, the production is far from perfect or demonstrating any particular accomplishments that would deem it a memorable classic. But much like the plot's main protagonist Jay Trotter, a chronic risk-taker at the brink of hitting rock bottom and played terrifically by Richard Dreyfuss, the movie is a diamond in the rough. This is the sort of hidden gem deserving of its cult status stature, one that was unfairly lambasted and undeservedly underestimated during its original theatrical release.

Based on Jay Cronley's novel Good Vibes, the cult comedy is an absurd anecdote about an ensemble of hapless losers, their unwavering optimism to one day hit it big and their banding to bask in the remarkable winning streak from one of their own. The story follows Dreyfuss' Trotter as his gambling addiction threatens his entire life and his marriage to a loving but understandably frustrated Pam (Teri Garr). But before placing the bet that will create a domino effect of comically cartoonish good fortune and suddenly alter the course of his life, we're introduced to Trotter's friends making ready for another day of gambling at a smoke-infested dive bar across the street from the racetracks. Some are tense, nervous wrecks like David Johansen's Looney while others philosophize on the probabilities like Robert Towers' Mikey, and others still gamble their money as they do love, like Ralph Seymour and Cynthia Nixon. 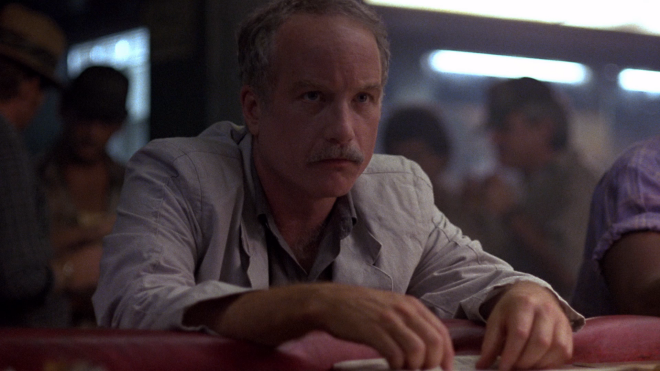 As the film progresses, the seemingly dreary bar evolves with Trotter's success, growing with a sense of hope where patrons share in his victories as well as his apprehensions. The place is a reflection of Trottler's internal anxieties, yet it's where he feels most comfortable being himself. This is contrasted by the high-class social club Trotter is granted access due to his large winnings, a well-lit accommodation for the wealthy where gambling has as much effect as playing a board game. Here, Trotter's amazing luck continues as he is hit on by Jennifer Tilly and Michelle Phillips, but he is also observably out of place. Beneath those gleefully ecstatic smiles, he is visibly playing a forgery of the person he wishes he could be, as though teased with a peek into the other side. But his real-life eventually interrupts the fantasy, dragging him back to the bar and ground level to watch the races, riddled in suspense.

And this is where a big part of the film's charm lies. After a calm and somewhat slow start, Let It Ride picks up speed when Trotter dares to test fate and bets his winnings on another race instead of going home. Like the perpetual layer of smoke hovering in the bar, director Joe Pytka in his feature-length debut, who later would go on to helm the Micheal Jordan vehicle Space Jam, fills each scene with a thick air of anxiety and a relentless sense of foreboding. By the third race, we're at the edge of our seats waiting for tragedy to strike, fearing his luck is sooner or later going to come to an end and our likable loser, thanks to Dreyfuss's performance, is ultimately leaving empty-handed. We are in his shoes during those moments, feeling his distress as he watches each stressful race and begging for him to win, much like his friends at the bar. It's a silly, fun yarn deserving of more attention and appreciation.

Vital Disc Stats: The Blu-ray
Courtesy of [Imprint] Films, Let It Ride arrives as a standalone Limited Edition Blu-ray, spine #35. The Region Free, BD50 disc is housed inside a clear transparent keepcase with a sturdy side-sliding slipcover. At startup, viewers are greeted by the Via Vision logo before switching to a static screen with the usual menu options along the bottom and musing playing in the background.

The comedy farce places its bets on Blu-ray, and although it doesn't win it all, it still comes out on top in the end. Looking very much dated with a fair amount of poorly-resolved sequences and littered with dirt specks throughout, the 1080p/AVC MPEG-4 encode appears true to its source. Overall, the 1.78:1 image is clean and stable with good resolution, displaying a thin and consistent grain structure to give it an appreciable film-like appearance. Contrast levels are nicely balanced with great visibility of the background info, except in a few instances of mild blooming and even milder posterization during a few indoor scenes. Blacks aren't always consistent, yet they're passable in spite of some murky shadows that still maintain strong delineation. Fine lines and textural objects are well-defined and detailed for the most part. The cinematography leans heavily towards secondary hues, which are nicely saturated, but the overall palette is accurately rendered with reds and blues looking particularly vibrant.

Originally recorded and presented in Dolby stereo, it should come as no surprise this DTS-HD Master Audio 5.1 soundtrack is a very front-heavy, character-driven presentation with a few great splashes of music, generating a welcoming and engaging soundstage. The lossless mix exhibits excellent fidelity and terrific acoustics while the overall mid-range is expansive and cleanly detailed. With strong, balanced channel separation and convincing off-screen movement across the fronts, vocals remain well-prioritized and precise from beginning to end. The low-end doesn't really offer much of note, but it's adequate for a majority of the runtime, reserved best for providing the music and action some depth and presence. Although there is no rear activity to speak of, the track is a great complement to a 32-year-old forgotten gem.

[Imprint] Films offers a new collection of bonuses that are exclusive to this Blu-ray edition.

Based on Jay Cronley's novel Good Vibes, Let It Ride is a sadly underrated and largely forgotten farce that follows a habitual gambler's extraordinarily lucky day at the racetracks. Starring Richard Dreyfuss, Terri Garr, David Johansen and Jennifer Tilly, the cult comedy is an absurd anecdote about an ensemble of hapless losers and their unyielding sense of hope, a film deserving of more attention and appreciation than it was given during its theatrical release. The comedy gem arrives on Blu-ray courtesy of [Imprint] Films, boasting a good but also dated HD presentation and a better, more satisfying DTS-HD audio track. With a decent set of new special features, the overall package is recommended.