Legend still packs a powerful punch and stands the test of thirty-five years of being one of the best fantasy movies to ever grace the big screen. Tim Curry's performance as The Darkness is legendary still to this day as well. Arrow Video's new restoration in 1080p HD looks amazing and the DTS-HD tracks sound amazing. Both the dIrector's Cut and the Theatrical cut are included here, along with hours upon hours of glorious, fun, and informative bonus features earning our highest recommendation - MUST OWN!

Legend has the perfect set of ingredients to be one of the best films to ever be released in cinema. A fantasy tale with an impressive cast and crew that catered to an audience of all ages in 1985 was poised to make a ton of money and be hailed by almost all who watched the film. Unfortunately, that was not the case and Legend was the forgotten stepchild in a sea of great films of similar tone and aesthetic.

Over the decades, more and more fans have come to love and appreciate Legend and its many iterations on Home Video. Fans are drawn to this film because of its practical makeup and visual effects, story, performances, and simply because Hollywood doesn't make films like this anymore. Legend has found its home with many fans and continues to be one of the braver and more courageous movies out there that most wouldn't cross into.

With '80s nostalgic films like The Dark Crystal, Labyrinth, and The Neverending Story - Legend was made to top all those movies. Iconic filmmaker Ridley Scott who was coming off his previous hit movies Alien and Blade Runner had set up Legend starring Tom Cruise, Mia Sara (Ferris Bueller's Day Off), and the G.O.A.T Tim Curry (Rocky Horror Picture Show) in a fairy tale land that has succumbed to darkness and evil. While the above-mentioned '80s films dealt with similar themes, Legend took it a step further with its villain The Darkness, and revealed what hell might look like complete with torture, fire, goblins, demons, and worse. It was a perfect blend of having elements for kids, teenagers, and even adults that allowed all ages to laugh and be scared at the same time.

Legend follows Tom Cruise who plays an elf named Jack (a name he plays in virtually most of his films) who is an innocent, meaning he only knows good and pure beauty, which is the light of the world. Lili (Mia Sara) is a princess who is in love with Jack and enjoys the light of the world, which is protected by unicorns. If the unicorns perish and die, a Satan-like figure known as The Darkness (Tim Curry) will shroud the light in cold, evil darkness and reign forever. After one unicorn bites the dust, The Darkness comes out and tempts Lili and vows to slay the other remaining unicorn. However, Jack and a few creatures help him storm the castle and come face to face with true darkness.

The movie has a great flow to it, but there are two main different versions of the film. The director's cut of the movie which is the way to watch in its ultimate setting is a two-hour film that allows the characters to breathe and the story to unfold naturally. What was released in 1985 inside US theaters was a 90-minute cut of the film that contained just action and fluff pieces that were assembled or in some cases mutilated from its original vision. The movie didn't do well for a variety of reasons, but over time those who were unkind have slowly backtracked and realized just how good Legend was and still is. The film works on so many levels as a biblical interpretation and as a fantasy epic journey the likes of Lord Of The Rings.

This all being said, while Tom Cruise is the front and center of this story, he and his character Jack are not the main focal point. He's a monotone beacon of light and good who reacts to everything happening to him on screen as if it's happening for the first time. This is his character and he plays it perfectly and as innocently as the character is written. With those elements, this is very much a film about The Darkness as he smoothly and hauntingly coerces his victims and Lily into his diabolical plan of destroying everything. The way he talks, walks, acts, and persuades everyone has multiple layers of evil and maybe even a smack of genuine wit and pleasantness. He's not a one-note villain. There's more to him than his giant horned stature and Curry plays him flawlessly.

Legend's score is also made with excellence and twice over. One version features Jerry Goldsmith's amazing music and the other features Tangerine Dream's score, both of which have their added value that enhances every action, element of terror, and romance that's happening on screen. Legend still stands the test of time for being one of the all-time greats in the fantasy genre. Again, they certainly don't make them like this anymore and movie buffs still wish they did. 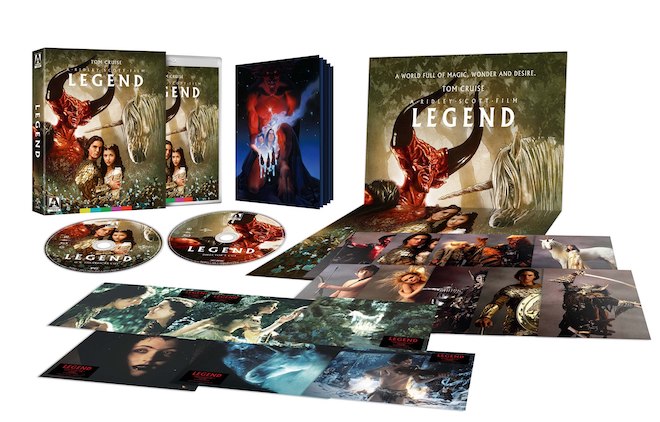 Vital Disc Stats: The Blu-ray
Legend seduces its way to Arrow Video on Blu-ray with two discs. One disc is the theatrical cut while the other is the director's cut. Both discs are housed in a hard, clear plastic case along with a hard cardboard sleeve case. There is a 59-page booklet, a fold-out poster, and character portraits included. Inside the clear plastic case are more lobby cards as well, along with an insert promo for Arrow. The artwork on the cardboard sleeve features new art of the three main characters the unicorn, which looks amazing. The back of the case features all of the information on the transfer and bonus features. The reverse artwork on the plastic case is the original artwork. for the film.

Legend comes with a new restoration of its US Theatrical cut in 1080p HD with an aspect ratio of 2.35:1, while its Director's Cut is presented in the 2011 HD master which was approved by Ridley Scott himself. According to the Arrow booklet, the restoration was done by Arrow Films using the original 35mm camera negative, which was conformed to the international cut of the movie, which could not be included in this set due to territory licensing restrictions. Additional interpositive film elements were scanned in at 4K resolutions as well, where elements of dirt, debris, and other issues were manually removed.

This new theatrical cut restoration is simply phenomenal and is a great upgrade from the previous 2011 release - more than ten years ago. Colors are much richer and bolder this time around, none of it looking natural or subtle, which was the intended purpose since this is a fantasy landscape. The beginning shots of Jack and Lili talking with each other in the forest and watching the unicorns look excellent here. The wildflowers display a ton of different colors laid against the many shades of green tall grass and all the white specks of fairy dust that are floating around.

The atmosphere is angelic and full of color. This all changes when The Darkness comes into view which turns this amazing colorful world into a cold, steely blue and grey ice land. The look now has a deep color blue to it with some various shades of white in the ice, snow, and other cottages around. When a fire is started in this cold world, the orange and red lighting looks excellent and brightens up the screen. Over at the castle, a literal hell is set loose with a ton of amber, yellow, and orange-tinted frames as the blood-red Darkness lurks about. The red shading is impeccable this time around and is deeper than previous releases. His black horns are inky and rich, along with the faint black shading around his eyes. It looks amazing. The green goblin looks excellent as does the gold shiny armor.

The detail is exquisitely sharp and vivid, revealing a ton of practical effects in individual hairs, the unicorn textures, Darkness's horns and shredded body, and even the slimy creatures that inhabit the forest. The many instances of rain droplets snow and fairy dust are easily seen now and never look soft. Costumes have brilliant textures and the sets reveal all sorts of detail from near and far. Black levels are now inky with no murky shadows and the skin tones have a warmer tone to them. This is a phenomenal-looking new 1080p HD transfer which makes this presentation the best the movie has ever looked with no video issues.

This release comes with both a DTS-HD MA 5.1 audio mix as well as a DTS-HD 2.10 stereo option. While the stereo mix sounds good with some minor directionality, the 5.1 track is the superior choice. The use of the surrounds and rear speakers is amazing. Every forest sound, fire crackles, scream, or footstep sounds excellent, robust, and loud. It's a constant source of sound effects from the rear section, something that wasn't expected.

The immersion of the sound effects in this film sounds better than ever with this DTS- 5.1 track. Darkness's voice has a great deal of bass that has a wonderful rumble to it as do the fire explosions and the heavier action sequences. The score whether by Goldsmith or Tangerine Dream always adds to the fantasy and horror elements of the sequences and the songs performed by artists are the same. Dialogue is clean and clear, free of any distortion or audio issues.

There are more than 266 minutes of bonus material here, including commentaries, image galleries, isolated score tracks, and more. These are some pretty good extras, both new and vintage, but the odd thing is - there is no Tom Cruise anywhere here. All of the new extras are located on the Theatrical Cut of the film.

Legend still stands the test of time and is one of the bolder and immersive worlds of those '80s fantasy movies. Timm Curry's performance is one-of-a-kind and will go down as one of the best on the big screen. Arrow's new restoration in 1080p HD looks excellent as is a worthy upgrade from previous releases. The DTS-HD 5.1 and 2.0 audio mixes are wonderful as well. And of course, the many hours of bonus material and physical elements, and artwork to this release are remarkable. Arrow Films knocked it out of the park. MUST OWN!