Take Me Out to the Ball Game

Though it may not hit a home run, Take Me Out to the Ball Game remains a heavy hitter in MGM's musical lineup. Mellifluous crooning by Frank Sinatra, athletic hoofing from Gene Kelly, and a dip in the pool by Esther Williams lift the slugging percentage of this nostalgic ode to baseball and vaudeville, while a top-notch transfer, robust audio, and a few vintage supplements distinguish Warner Archive's Blu-ray presentation. Recommended.

In between their portrayals of sailors on leave in Hollywood (Anchors Aweigh) and New York City (On the Town), Frank Sinatra and Gene Kelly teamed up to play turn-of-the-century professional baseball players who moonlight as vaudeville hoofers during the off season. As odd as such a premise may sound, legend has it Take Me Out to the Ball Game is based on the exploits of actual major leaguers who took to the stage during the winter to make some extra dough. Sinatra and Kelly play a bit of ball in this spritely musical, but spend most of their time singing and dancing (as well they should), and though it can't quite eclipse their other two screen pairings, Take Me Out to the Ball Game stands as a worthy - and entertaining - companion piece.

The wispy narrative chronicles the comic hijinks and romantic pursuits of second baseman Dennis Ryan (Sinatra) and shortstop Eddie O'Brien (Kelly), who play for the fictional 1908 world champion Chicago Wolves. After a successful vaudeville run, the pair returns to the ball field for the start of the new season and learns their team has been bequeathed by its recently deceased owner to K.C. Higgins, a "distant relative" without any prior experience. Much to the club's shock and dismay, K.C. turns out to be a woman (Esther Williams), but unlike Rachel Phelps in Major League 40 years later, she does everything she can to help the Wolves win the pennant.

The stringent rules and curfews K.C. imposes impede Eddie's womanizing and cause friction between them...which of course quickly evolves into a mutual attraction. The shy, inexperienced Dennis initially pines for K.C., too, but once rabid fan Shirley Delwyn (Betty Garrett) takes a gander at him during a game, she pursues Dennis with a vengeance. In a nod to the notorious 1919 Black Sox scandal, a rascally gambler (Edward Arnold) uses an unwitting Eddie to try and quash the Wolves' pennant hopes, but everything gets (happily) straightened out in time for the flag-waving finale. 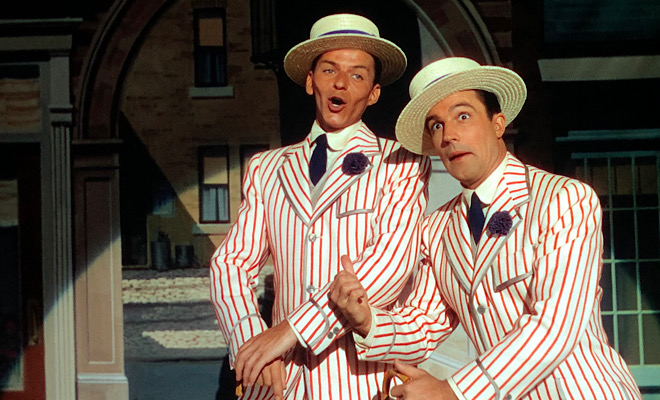 Kelly and future director Stanley Donen wrote the film's story outline, choreographed the dances, and even helmed a couple of numbers when director Busby Berkeley bowed out due to health problems toward the end of the shoot. (Take Me Out to the Ball Game would prove to be Berkeley's final feature-length directorial effort. Plagued by alcoholism and depression, Berkeley would only direct isolated musical sequences for a handful of MGM films after completing his work on this musical.) The duo's inventiveness and artistry sufficiently impressed producer Arthur Freed, who would entrust the two men with directing On the Town - the last and best of the Kelly-Sinatra musicals - a few months later.

Striking similarities often make Take Me Out to the Ball Game feel like a minor-league warm-up for On the Town. In addition to Kelly and Donen's direction, both films boast songs by Roger Edens, Betty Comden, and Adolph Green, feature Jules Munshin as Kelly and Sinatra's best pal, and cast Betty Garrett as Sinatra's aggressive, lovestruck girlfriend. (Her spirited solo "It's Fate, Baby, It's Fate" eerily resembles the equally forward "Come Up to My Place" in On the Town.) Once again, Kelly plays a brash man of the world who must teach the naive, starry-eyed Sinatra the romantic ropes, but in a refreshing change, Williams gives Kelly all he can handle. Her innate athletic ability lends the film essential authenticity (she's a far more believable ball player than either Kelly or Sinatra), while her spunk spices up the rather bland story.

Williams makes a splash with her acting, but also - predictably - takes a dip in the pool. (Getting wet in every movie must have been a stipulation of her MGM contract.) Though her aquatic sequence feels like a fish out of water in this period baseball film (and her revealing bathing suit would hardly pass as appropriate swimming attire in 1908!), it's blessedly brief and low-key. Kelly reportedly gave Williams a hard time during production (among other things, he resented her three-inch height advantage), but her portrayal outclasses his. Kelly's shameless mugging and goofy antics often draw attention away from his very fine dancing, including a breathtaking solo turn with an Irish slant. 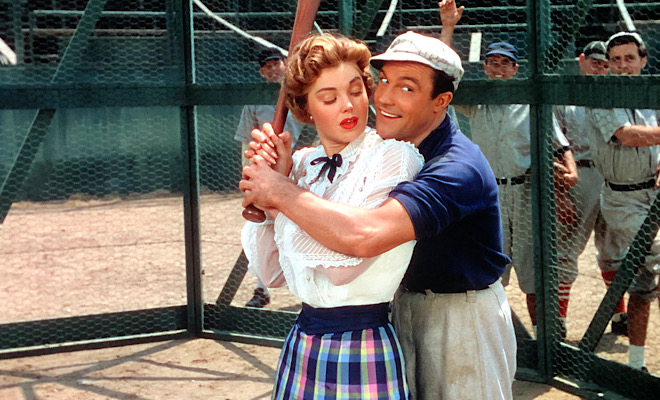 The standout title number, impeccably performed by Sinatra and Kelly (a chunk of it is included in the MGM musical retrospective That's Entertainment!), comes early in the film, and none of the other musical sequences can top it. Lilting ballads alternate with snappy uptempo melodies with clever lyrics ("O'Brien to Ryan to Goldberg," a takeoff on the classic real-life double-play combination of Tinker to Evers to Chance, especially shines), but none of the songs make lasting impressions. Just one more reason why Take Me Out to the Ball Game quickly receded into On the Town's shadow and remains there today.

A frothy mix of crooning, clowning, romance, and terpsichore laced with nostalgic charm and dripping with MGM's patented gloss, Take Me Out to the Ball Game effortlessly entertains, but rarely dazzles. This Golden Age musical checks all the boxes and hits all the right notes, but like a middling baseball team in a tough division, it can't break away from the pack. Still, if you're a fan of the genre and especially an admirer of Kelly, Sinatra, and/or Williams, grab some peanuts and crackerjack and enjoy the show. 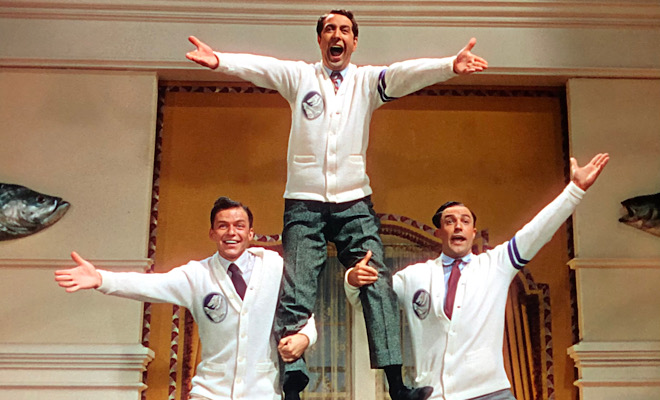 Take Me Out to the Ball Game arrives on Blu-ray packaged in a standard case. Video codec is 1080p/AVC MPEG-4 and audio is DTS-HD Master Audio 2.0 mono. Once the disc is inserted into the player, the static menu with music immediately pops up; no previews of promos precede it.

Warner Archive delivers another in a seemingly endless string of eye-popping Technicolor transfers culled from the best surviving elements. The 1080p/AVC MPEG-4 rendering of Take Me Out to the Ball Game may not rank as highly as others in the WAC canon, but it still bursts with marvelous clarity, superior contrast, and lush, vibrant hues. Vivid reds, verdant greens, deep blues, and sunny yellows stoke the senses, while delicate pastels beautifully temper the bold palette. Rich blacks and bright, stable whites provide striking contrasts to the three-strip Technicolor, and fine details like delicate pinstripes and costume textures are remarkably sharp. Flesh tones look natural, close-ups ooze glamor, and not a single nick, mark, or errant scratch dot the pristine print.

On the downside, some of the exteriors look a tad overexposed and a few scenes sport a hint of softness or dash of dullness, but those are minor quibbles. Take Me Out to the Ball Game has never looked better, and anyone who loves Sinatra, Kelly, and/or Williams will revel in its splendor.

A robust, crystal clear DTS-HD Master Audio 2.0 mono track puts some extra spring in this musical's step. Excellent fidelity and tonal depth bolster the impact of the musical numbers and show off Sinatra's velvety voice to its best advantage. A wide dynamic scale embraces all the highs and lows of the lush and brassy orchestrations without a hint of distortion and all the dialogue is easy to comprehend. All the baseball effects - the crack of the bat, roar of the crowd, and slides into home - are crisp, and no age-related hiss, pops, or crackle distract from the action on screen. MGM musicals demand strong audio tracks and once again Warner Archive delivers the goods.

All the extras from the previous DVD have been ported over to this Blu-ray release.

Take Me Out to the Ball Game may give baseball short shrift, but it sure packs in the musical numbers. Though this nostalgic tale of athletic hits, romantic strikes, and plenty of all-star crooning and hoofing can't eclipse the other two films that pair Gene Kelly and Frank Sinatra, it remains a delightful romp that any fan of MGM musicals will certainly enjoy. A stunning video transfer, robust audio, and a few vintage extras enhance the appeal of this charming musical that's a fine showcase for its two iconic stars. Recommended.