A minor film noir that's hampered by a ho-hum story, Step By Step doesn't advance the genre, but it's an elegantly shot, well-acted low-budget thriller that's been given a stunning makeover by Warner Archive. Lawrence Tierney and Anne Jeffreys try to evade the Nazis and a bum murder rap in this cat-and-mouse chase flick that looks and sounds great on Blu-ray. It may not make any huge cinematic strides, but Step By Step is still worth a look for noir fans.

"Step by step, we're getting further behind the eight-ball."

So laments Evelyn Smith (Anne Jeffreys) to Johnny Christopher (Lawrence Tierney) as they try to evade both ruthless Nazi thugs and a local California police force that believes they bumped off a government agent. In a nutshell, that's the plot of Step By Step, a slick, B-grade chase film that keeps its two attractive stars on the run for 62 minutes. Espionage, mistaken identity, gaslighting, and paranoia fuel the preposterous narrative, but spirited performances, striking locations, and lush cinematography help keep this overblown thriller grounded.

Evelyn's first day on the job as assistant to Senator Remmy (Harry Harvey) turns into a nightmare when a group of post-war Nazi sympathizers who hope to revive the defunct movement attack the Senator in his seaside home and replace him with a lookalike imposter. The ruthless gang of four hopes to intercept a classified list of underground Nazis before it gets into the real Senator's hands and he can blow the lid off the nefarious movement.

Johnny, a decorated ex-Marine who met Evelyn by chance on the beach earlier in the day, goes to the Senator's house seeking aid after he locks his keys in his car but instead stumbles into some serious intrigue. Clad only in his swim trunks, Johnny picks up and puts on a stray jacket that just happens to have the sought-after list sewn into one of its sleeves. He gallantly rescues Evelyn, but in the process gets framed for murder, and the two become targets of both the Nazis and police. 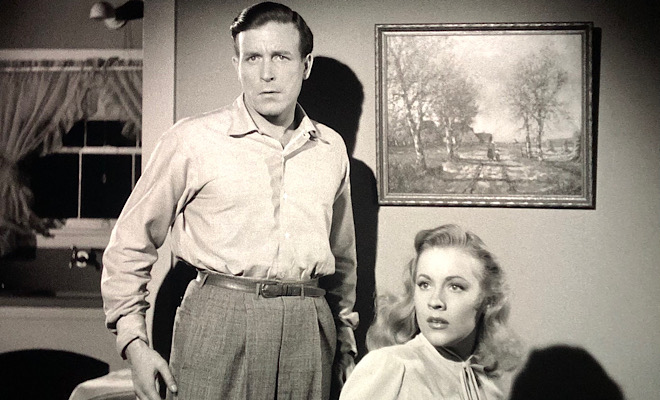 Tierney and Jeffreys both starred in the popular noir biopic Dillinger the previous year, prompting RKO to try and duplicate that film's success by reteaming the two rising stars. Though Step By Step possesses many exciting elements, it lacks the urgency and grit required to truly captivate its audience. A 62-minute pursuit film should fly by, but Step By Step often takes its title too literally. Much of the time it walks instead of runs and the screenplay lacks the crackling dialogue that's such a vital cog in the wheels of film noir.

Director Phil Rosen, who specialized in low-budget B-pictures after a distinguished silent film career, maximizes the dramatic locations along the Pacific Coast Highway and constructs one thrilling car chase, but struggles to keep the story from sputtering. Some shadowy noir photography keeps the eye engaged, but without a taut narrative, the mind begins to wander. 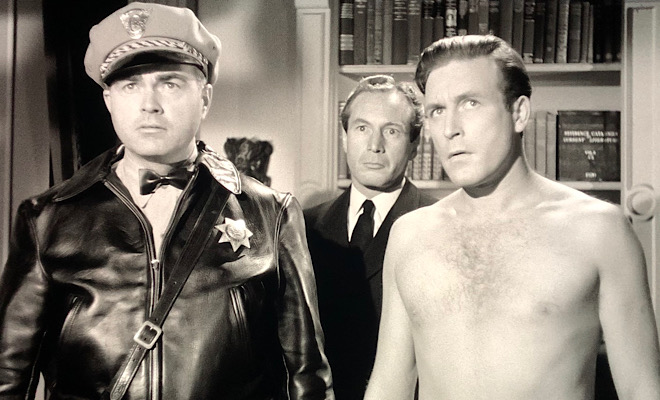 Tierney resembles Tarzan during the movie's first half as he struts around half-naked, but his tough-guy, square-jawed persona bolsters Step By Step's appeal. Jeffreys makes a fine foil and is lovely to look at, but her role is sketchy at best. A bit of banter and a deft nod to It Happened One Night lighten the tone, but the addition of Johnny's scene-stealing pet pup (who looks an awful lot like Toto from The Wizard of Oz) brings a sour note of cuteness into what should be a hard-boiled tale.

Step By Step may not live up to the adjectives plastered on its promotional poster ("Rough! Rugged! Ruthless!"), but it's still a fun noir curio that genre aficionados will surely want to add to their collections. Rarities like this one seldom get revived, so it's a treat to see Step By Step at all, and a bonus to see it in such pristine condition. 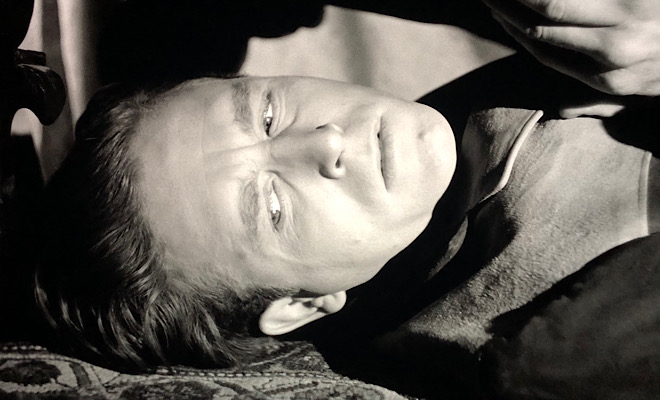 Step by Step arrives on Blu-ray packaged in a standard case. Video codec is 1080p/AVC MPEG-4 and audio is DTS-HD Master Audio 2.0 mono. Once the disc is inserted into the player, the static menu without music immediately pops up; no previews or promos precede it.

A terrific 1080p/AVC MPEG-4 transfer elevates this run-of-the-mill film noir, heightening the impact of the beautiful coastal exteriors and helping the story feel more immediate. Light grain preserves the celluloid feel, while exceptional clarity, contrast, and shadow delineation faithfully honor the work of yeoman cinematographer Frank Redman. Blacks are appropriately dense, whites are bright but resist blooming, and the nicely varied grays in between crystallize fine details and pump up depth. Arrestingly sharp close-ups showcase facial pores, blemishes, and the allure of Jeffreys, and the vibrant location exteriors seamlessly mesh with the more sedate studio interiors. A few scenes sport a bit of softness, but nary a single nick, mark, or errant scratch mar the pristine source material. Once again, Warner Archive revitalizes a little-known classic and beautifully preserves it for future generations.

The DTS-HD Master Audio 2.0 mono track supplies robust audio that greatly enhances the on-screen action. Subtleties like chirping birds and the ocean surf's ebb and flow come through cleanly, while sonic accents like gunfire, shattering glass, sirens, and a jarring tire blowout grab attention. A wide dynamic scale embraces all the highs and lows of the melodramatic music score without a hint of distortion, and all the dialogue is clear, well prioritized, and easy to comprehend. No age-related hiss, pops, or crackle intrude either.

A couple of vintage supplements are included on the disc.

Striking locations, solid performances, and elegant photography elevate Step By Step, but a mediocre story keeps this B-grade film noir from scaling any cinematic heights. Another glorious video transfer, robust audio, and a couple of vintage supplements distinguish Warner Archive's Blu-ray presentation of a movie that doesn't add up to the sum of its parts. Still, if you're a film noir devotee, Step By Step is definitely worth a look.