A forgotten made-for-television movie that no one needs to remember, The Two Worlds of Jennie Logan is a time-traveling romance that really should remain in the past. Imprint Films brings it back to the present and gussies it up with solid video and audio transfers and slick slipcase packaging, but all the gloss can’t hide the film’s shortcomings. For Fans Only.

Made-for-television movies were a dime a dozen in the 1970s. The big three networks churned them out like sausage, offering viewers a steady diet of (mostly) mediocre fare a few times each week. Big stars and up-and-comers alike populated them, but even the most renowned names struggled to bring authenticity to trite material that rarely taxed their talent or matched their lofty reputations.

Glossy and vapid, The Two Worlds of Jennie Logan epitomizes the type of undistinguished TV movie that flooded the airwaves during that period, so if you’ve never heard of it, you’re not alone. (I grew up in the 1970s and it doesn’t ring even the faintest of bells.) A time-traveling, house-possessed hybrid with a bit of Harlequin romance and Gothic mystery thrown in, this saccharine love story premiered in its designated time slot, garnered middling ratings, and was promptly forgotten. Why it’s being revived now on Blu-ray is even more of a mystery than the tale itself, and unless you’re a diehard Lindsey Wagner or Linda Gray fan, this run-of-the-mill drama probably won’t hold much interest. 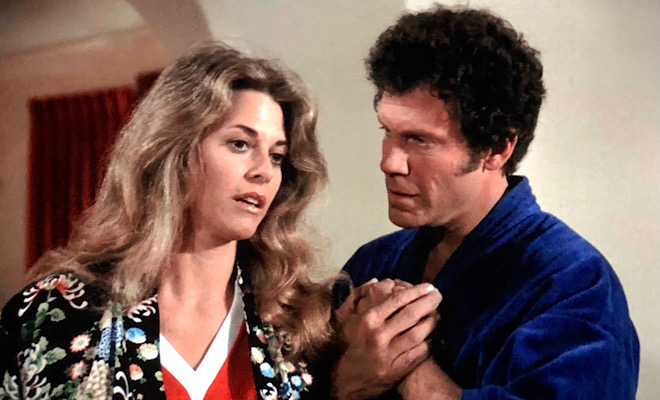 As the film opens, Jennie (Wagner) and her strapping professor husband Michael (Alan Feinstein) tour an old Victorian house that offers them, quite prophetically, “the best of both worlds”...bucolic country living with proximity to Michael’s job in the city. The seemingly perfect couple impulsively buys the seemingly perfect home, but good looks and fancy trimmings can't hide the serious cracks in their marriage. Haunted, hurt, and scarred by Michael’s recent sexual fling with a student, Jennie seeks solace and escape, and finds both when she discovers an old gown in the attic.

Jennie is drawn to the prim, lacy dress like a moth to a flame, and when she puts it on and fixes her hair in a Victorian bun, a seizure of sorts comes over her. She regains her bearings moments later, but finds herself transported back in time to the turn of the 20th century, where she meets David Reynolds (Marc Singer), a distraught (but conveniently hunky) widower who lives in the house in which Jennie now resides...and whose wife - whom Jennie eerily resembles - died under mysterious circumstances.

The time traveling, which occurs whenever Jennie dons the dress, frightens her at first, but she soon looks forward to the sojourns and begins to feel more at home in the past than the present. Michael, of course, can’t accept her “delusions” and sends her to a psychiatrist to regain her marbles. As their relationship continues to cool, Jennie develops a smoldering passion for David, which sparks the ire of Elizabeth Harrington (Gray), the sister of David’s dead wife, who’s determined to marry David once he’s finished mourning.

While she’s in the present, Jennie visits the local historical society and begins researching the characters she’s met in the past, and when she discovers intrigue, scandal, violence, and an unsolved mystery, she becomes deeply disturbed. A race against time ensues, as Jennie frantically tries to alter events in the past before irrevocable harm occurs and David must confront his tragic destiny. 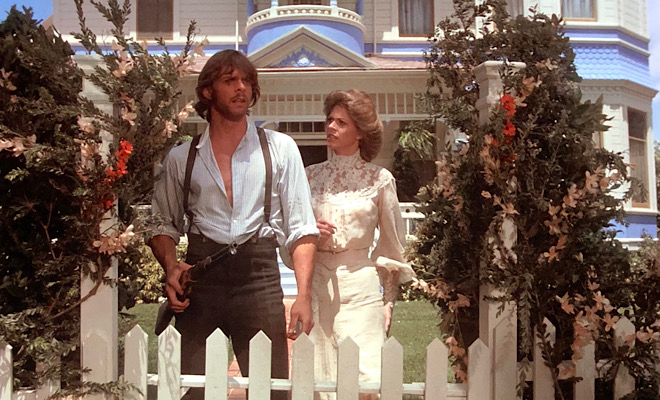 The Two Worlds of Jennie Logan has its moments, most notably a clever denouement that makes a big initial impression before falling apart under closer scrutiny. (Isn’t that usually the case?) Glimmers of such films as Burnt Offerings and Somewhere in Time swirl about the brain as the yarn unravels, but there’s little depth to the characters and not much substance beneath the desperate longings that consume them. Frank De Felitta’s direction is stilted and choppy...typical of 1970s TV movies. Though he nicely evokes the bygone period, his consistent focus on the male physique seems like a calculated ploy to titillate the target audience of bored and frustrated housewives seeking vicarious romance and beefcake. Feinstein spends much of the movie bare-chested and I’m fairly sure most men in the 1870s didn’t consistently wear their shirts open to the navel like Singer does here...especially when the women of the era couldn’t even show their necks.

While certainly adequate, the performances never rise above the mundane. Wagner catapulted to fame playing TV’s Bionic Woman, but her laughably torturous writhing and bug-eyed reactions during her initial transitions into the past look more like Bruce Banner transforming into The Hulk. The rest of the time she’s earnest and sincere, but rather bland...just like the film. Gray, who forever will be etched in our collective memory as Sue Ellen Ewing on the long-running primetime soap Dallas, nabs “special guest star” billing, but the lofty stature seems to shade her affected, overly stiff performance. Her makeup job as a centenarian is downright monstrous and looks incredibly fake and plastic during her extreme close-ups. 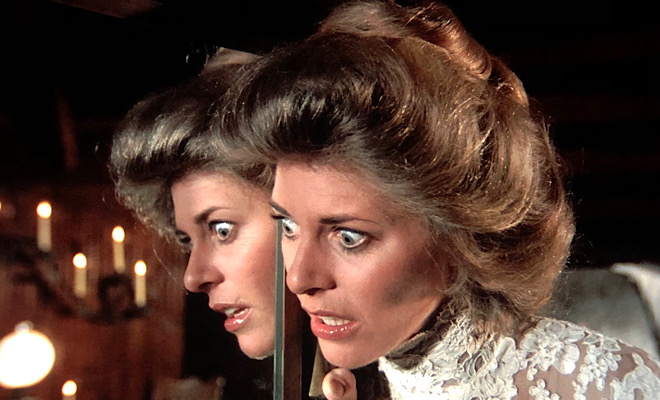 Sadly, the teleplay, also by De Felitta (who specialized in supernatural tales and is best known for the blockbuster novel Audrey Rose), doesn’t do the actors many favors. It’s filled with trite dialogue and sanctimonious speeches, and though the psychobabble from the therapist employed to treat Jennie’s “condition” may have been enlightening 40 years ago, it sounds awfully simplistic today.

The Two Worlds of Jennie Logan makes some cogent feminist statements that surely hit home with 1970s women, but its reliance on traditional romantic cliches diffuses the impact. Like its heroine, the film tries to have the best of both worlds, but winds up caught between them, and that leaves the viewer in limbo. 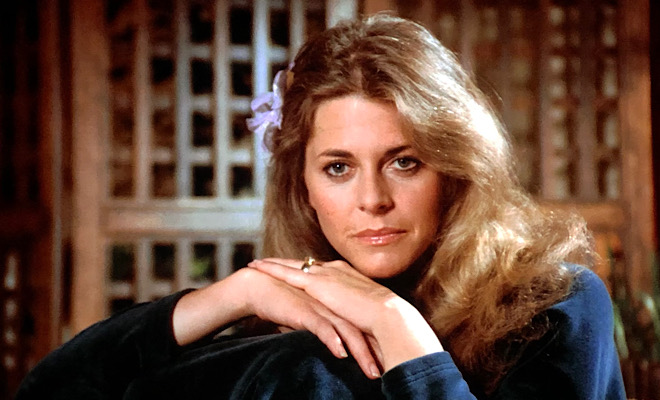 The Two Worlds of Jennie Logan arrives on Blu-ray packaged in a standard clear case inside a sturdy, glossy slipcase. (Only the first 1,500 copies of this Blu-ray release will include the slipcase.) Video codec is 1080p/AVC MPEG-4, audio is LPCM 2.0 mono, and the disc is region-free. Once it's inserted into the player, the static menu with music immediately pops up; no previews or promos precede it.

The 1080p/AVC MPEG-4 transfer presents The Two Worlds of Jennie Logan in the best possible light. Vivid color, excellent clarity, and well-balanced contrast produce an often stunning image that's packed with fine detail and exudes a fair amount of depth. Grain is nicely resolved, but the picture still flaunts a film-like feel, and though a few scenes look a bit soft, their duration is fairly brief. The verdant green landscapes and crystal blue skies grab attention, while deep blacks and a mixture of pure and creamy whites anchor the frame. Crisp close-ups spotlight Wagner's flawless complexion, the rugged contours of Feinstein's face, and Singer's mustache, but the enhanced sharpness only heightens the fake, rubbery look of Linda Gray's old-age makeup. Flesh tones appear natural and remain stable throughout, shadow delineation is quite good, and only an errant nick or two dot the pristine source material. For a TV movie that probably hasn't gotten much love over the years, The Two Worlds of Jennie Logan looks surprisingly fresh and vibrant.

The LPCM mono track handles its chores with ease. A wide dynamic scale embraces the highs and lows of Glenn Paxton's romantic music score without any distortion, all the dialogue is well prioritized and easy to comprehend, and the dissonant chords that accompany Jennie's first forays back in time are appropriately shrill and jarring. Subtle atmospherics nicely shade the track and no age-related hiss, pops, or crackle break the mood. Back in the 1970s, television soundtracks were fairly tame, but the lossless presentation here shows this one off to its best advantage.

Aside from the one-minute television trailer that aired just prior to the film's original broadcast, the only extra is an audio commentary by critic Kevin Lyons, who seems to possess a genuine affection for The Two Worlds of Jennie Logan. Lyons analyzes the plot, quotes from interviews the actors gave at the time of the movie's airing, and divulges the house used in the film would later be the setting for a few seasons of the TV reality series The Bachelor. He also talks about the story's time travel gimmick, chronicles the film's production, notes the differences between the novel and the movie, salutes the great made-for-television flicks of the 1970s, and provides in-depth bios of Lindsey Wagner, Alan Feinstein, Marc Singer, Linda Gray, and other members of the cast and crew. If you're a fan of The Two Worlds of Jennie Logan, you'll find this commentary interesting and worthwhile.

I have nothing against 1970s TV movies receiving the high-def treatment, but there must be far better choices than The Two Worlds of Jennie Logan. Despite a good twist ending, the time-traveling romance never rises above typical sentimental fare. The limited Blu-ray edition from Imprint Films features a crisp transfer, solid audio, and handsome packaging, but sadly all that beauty is only skin deep. For Fans Only.