The Brotherhood of Satan - [Imprint]

The great Satanic Panic strikes a small isolated California town in The Brotherhood of Satan. An idyllic American family on a road trip becomes trapped in a small town besieged by elderly Satanists bent on eternal life through the sacrifice of the town’s children. A chilling concept is amiably executed but a few narrative bumps keep it from greatness. Imprint Films delivers a first-rate Blu-ray release with a solid A/V presentation and a nice selection of bonus features. If you’re a fan or love 70s horror, it’s worth checking out. Recommended

Note: Arrow Video is releasing Brotherhood of Satan in the U.S., we have not yet received a review copy. When we get hands on we’ll be comparing both releases.

Ben (Charles Batemen), his new girlfriend Nikki (Ahna Capri), and his young daughter K.T. (Geri Reischl) are on a road trip. When they come upon the bodies of a family crushed to death in a car, Ben tries to report it to the local sheriff (L.Q. Jones). They don’t expect is to become the next victims in a sinister scheme to grant eternal youth to the elderly citizenry through Satanic sacrifices of the town’s children!

Some movies can survive on a great concept alone with simple execution. The Brotherhood of Satan is one of those horror pictures. A no-frills production, simple locations, minimal expensive special effects, the film survives largely on the creepy concept and the performances of its cast toplined by L.Q. Jones and Struther Martin. With some efficient direction by Bernard McEveety and a tight script by Sean MacGregor and William Welch (it’s widely understood that L.Q. Jones did some heavy uncredited rewrites himself), and you have a neat little creeper of a film. But it’s also a movie that doesn’t fully realize its concept.

The opening minutes of the movie where we meet Ben, his daughter K.T. and his new girlfriend Nikki is great stuff. Virtually void of any dialog, we slowly get to know them as a family unit just watching what they do. They’re our baseline of what “normal” is supposed to look like. Then they find the bloody remains of the accident and the illusion of normal is destroyed. When they try to report the accident and L.Q. Jones desperately tries to get them out of town before the mob of locals gets them is a terrifying sequence. It sets up the perfect tantalizing mystery of “what the hell is going on?” that hooks an audience. Unfortunately, one of the biggest pieces of the puzzle is revealed far too early.

I’m a bit of a stickler when it comes to reveals. Now, going in I knew this was a Satanic cult picture - the title practically screams that in your face so no big news there. The reveal of the cult and their dastardly scheme is pretty horrifying in how subtly it’s revealed. When a non-believer is summarily “dealt with” it’s terrifying because it’s not gory. It’s not flashy - just fricking intense! The problem is that scene reveals the leader of the cult entirely too soon. This scene comes on the heels of our Sheriff L.Q. Jones, Charles Batemen’s Ben, and a couple of other men trying to figure out “who” or “what” is killing so many people in town. It’s okay to answer the “what” of that question, but the “who” should have been saved for later. The audience moves too far ahead of the heroes and what they're trying to figure out. That’s my one real big nitpick with The Brotherhood of Satan. Thankfully a genuinely creepy final act with a heck of a twist ending pulls a lot of weight for this one. 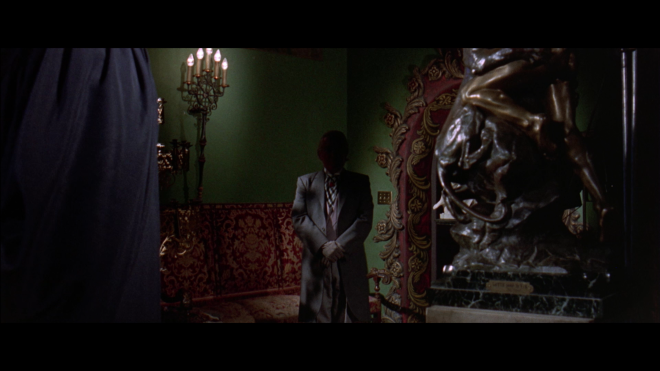 As a low-budget feature, it’s got a lot of steam and energy working for it. Performances are generally very good with L.Q. Jones and Struther Martin putting in quite a bit of legwork on this one. The staging for some of the creepier sequences puts a chill down your spine. It’s a good watch. But at the same time, I have to admit that ahead of my first viewing years and years ago it was way oversold. A friend put it in league with Rosemary’s Baby and while there are some similarities, it’s nowhere near the same beast. After a few years away from it, I’m glad to still enjoy The Brotherhood of Satan but it’s still not a movie I’d put on the top of the pile. Definitely a fun movie - and if you’re looking for new material this Halloween season give it a try.

Vital Disc Stats: The Blu-ray
Brotherhood of Satan gets another run on Blu-ray thanks to [Imprint] Films. Pressed on a region-free BD-50 disc, the disc is housed in a sturdy clear case with a bold red slipcover with spine number 57. The disc loads to a basic menu with traditional navigation options. 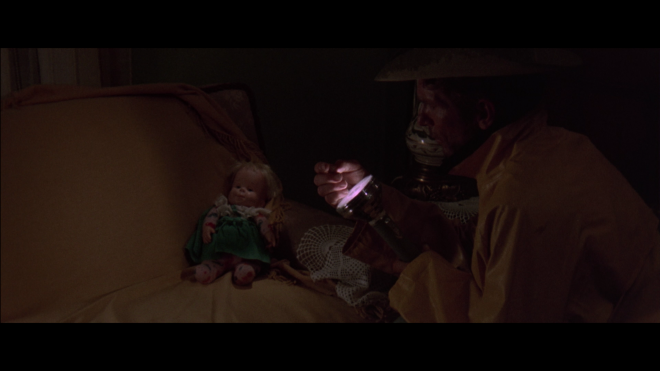 Reportedly sourced from a new 2K scan supplied by Sony Pictures, The Brotherhood of Satan conjures up an impressive 1080p 2.35:1 transfer. This is one of those films where a little “rough around the edges” appearance actually helps the mood of the film. Film grain maintains a natural structure with impressive details in facial features, clothing, and set design. Some speckling is apparent throughout the run giving the image a little bit of a grittier appearance that I’d argue lends itself to the overall creepiness of the film. Colors are strong with some great primary pop - red gets some extra TLC. Black levels are nice and inky, a couple of sequences are a little lighter than others and likewise a few are a bit close to crush - but nothing serious. I never picked up either of the two Mill Creek Entertainment releases so I can’t compare those, but I have to imagine this is a significant step up. 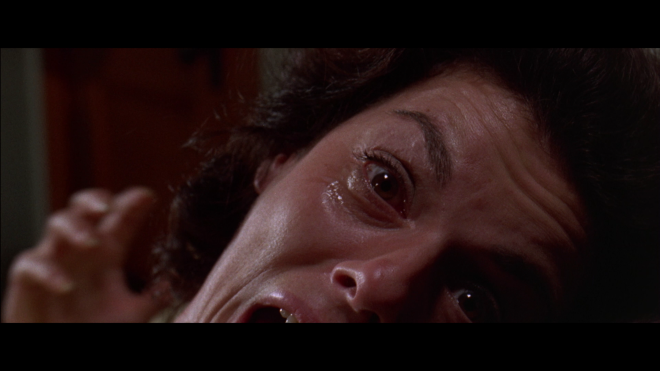 The Brotherhood of Satan arrives with a strong LPCM 2.0 mono track. Well balanced between scoring, dialog, and sound effects, this is a nice active mix with plenty of atmosphere. Once the film sets into its groove, the pacing of the dialog allows for a nice bit of background sound effects to come to life. It’s a simple sound design but it’s effective when you have a feeling like something is always lurking in the distance. Levels are spot on without any need for adjusting. 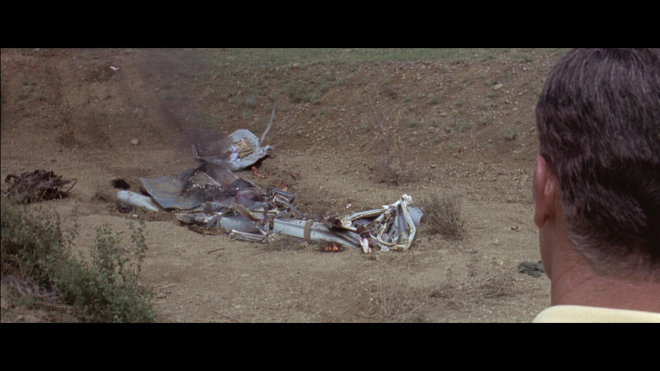 Again, we haven’t gotten ahold of the Arrow Video release yet, but [Imprtint] has assembled their own assortment of unique bonus features. First up we get another wickedly entertaining and very informative commentary by author Troy Howarth and Mondo Digital’s Nathaniel Thompson. It’s a great track and absolutely worth the listen. After that we get a look inside LQ/Jaf Productions, a conversation with author and film critic Kim Newman (I understand he did a commentary for the Arrow disc), and the theatrical trailer. A pretty nice collection of extra features. 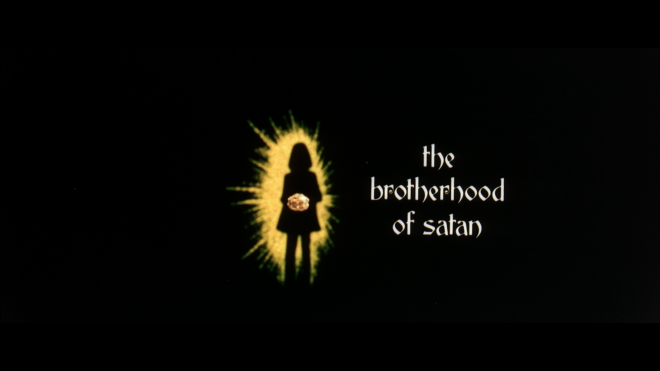 The Brotherhood of Satan may not be the greatest horror film to come down the pipeline in the 70s, but it’s a solid flick. Lean and mean and to the point, the film breezes by with some solid thrills and chills along the way. Sure, it could have been a better movie, I have my quibbles with its story structure, but there’s enough meat on these bones to keep you entertained.

[Imprint] Films delivers an excellent Blu-ray release for The Brotherhood of Satan. Sourced from a new scan, the new transfer looks great without losing the gritty character of the film. The audio is impressive, and there’s an interesting assortment of bonus features well worth picking though. I may not love this one, but I know a few folks who do. If you’re eager to add a quality release to your collection or if you’ve never seen it, you don’t need to bargain with the Devil to bring this one home. Recommended.