The Last Man on Earth

After a pandemic turns the world into undead vampires, Vincent Price is The Last Man on Earth. The first and arguably best adaptation of I Am Legend, this film is creepy, unsettling, and one of Price’s best performances. Kino Lorber Studio Classics gives this film its first solo release on Blu-ray recycling the same solid A/V presentation while including some new and archival bonus features. If you need this film in your collection, you can’t go wrong with this disc. Recommended.

Three years. That’s how long it’s been since the world ended and the population consumed by a plague that turns the living into undead vampires. Every day Robert Morgan (Vincent Price) wakes up, checks the security measures of his home, and heads out into the city. Block by block, street by street, he hunts the undead putting them to rest permanently. As the only person immune to the plague, he’s the last man on earth who can stop these monsters.

Richard Matheson certainly was prolific during his career. Not only did he make a stand as a novelist writing some impressive pieces of science fiction, but he was also an indelible presence in television. He made contributions to The Twilight Zone, Night Gallery, penned both The Night Stalker and The Night Strangler he’s also responsible for Stephen Spielberg’s first feature Duel. Any one of his credits is impressive, but the one that stands out above all others is his novel I Am Legend.

This bleak tale of one man’s stand against the hoard of the undead has been the inspiration for countless films and three official adaptations - The Last Man on Earth, The Omega Man, and I Am Legend. Of these three films, The Last Man on Earth is the best - in my opinion at least. It stays tighter to the events of the book, It’s bleak and unforgiving, and often you question the hero’s sanity. Once a scientist committed to saving lives he’s become a killer no longer even attempting to save anyone. While it would have been amazing if Fritz Lang could have stayed aboard this particular project when it was a Hammer production, but as it stands in the hands of Sidney Salkow it’s a creepy delight. The other two films completely miss the tone (The Omega Man) or miss the point entirely with terrible creature effects (I Am Legend) 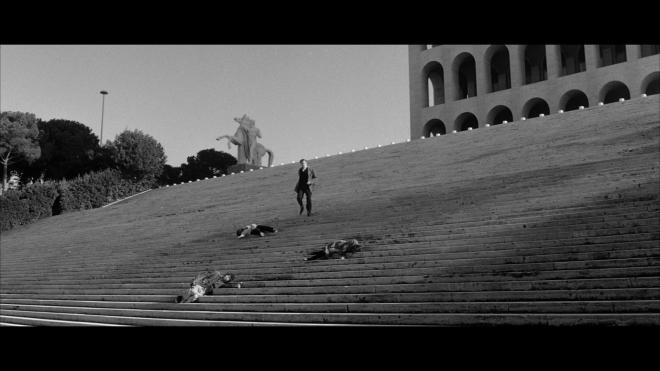 I love this particular version because Vincent Price is so good in it. For the first half of the film, it’s practically a one-man show where he plays against type. In most of his films Price had this aristocratic air and reserved stateliness. Here he’s disheveled, erratic, and his internal monologue of his day-to-day routines come in halting half-thoughts. The moment he sees the dog and his face comes alive with hopefulness is one of his best scenes. He’s the one that carries the movie through a turmoil of emotions always on the brink of complete insanity.

While I love this movie dealy, I admit it can be clunky. The bumpiest piece of road is the flashback - but that’s not the movie’s fault. It was clunky in Matheson’s book and it’s been a sticky spot in every adaptation. How do you explain what happened and why the hero is alone, slowly going crazy, while also killing vampires? With The Last Man On Earth, it’s an interesting introduction to various characters - we learn why his undead neighbor Ben (Giacomo Rossi Stuart) and his band of marauders try to kill him every night when the sun goes down. We also learn why Morgan hates vampires and is in complete disbelief that any of them could still have a shred of humanity or a soul left. It’s a great series of scenes, but it’s very long and probably could have been summed up at a much quicker pace leading into the final act of the film.

From setting a shockingly bleak tone for horror films and being a direct influence on classics like Night of the Living Dead - The Last Man on Earth is a hell of a great picture. Now that we’re in the middle of another surge in our own current pandemic, the scenes of empty streets are all the more chilling. Those moments were already creepy, now they feel very real. A lot of people say Price was miscast, but I think he was the perfect choice for this film. It’s a dark and unrelenting movie and in many ways ahead of its time. If it’s been a while I encourage you to give it another round. It actually makes a hell of a double feature with Romero’s iconic zombie classic.

Vital Disc Stats: The Blu-ray
If you missed out on the now OOP Vincent Price Collection II set, Kino Lorber Studio Classics has your back giving The Last Man on Earth a second run on Blu-ray as a solo title free from the confines of a box set. Pressed on a Region A BD-50 disc, the disc is housed in a standard sturdy keepcase with an identical o-card slipcover. The disc loads to a static image main menu. 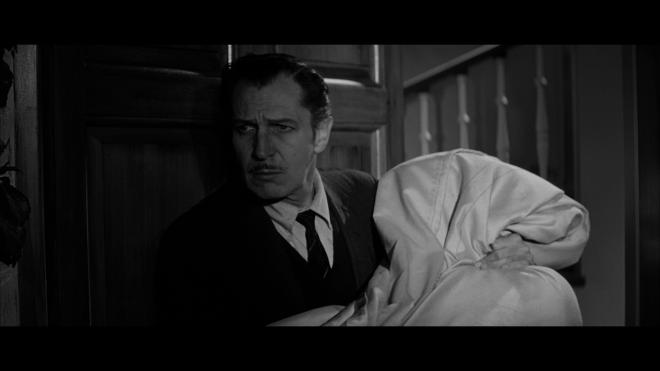 I only ever got to check out the Vincent Price Collection II from my library years ago, so I don’t have that disc for immediate comparison, but this 2.35:1 1080p transfer appears to be identical. There’s nothing on the artwork to indicate a remaster or restoration and the same set of blemishes ranging from speckling to slight scratches to dust and debris are apparent throughout. Not to say that’s a bad thing at all. While a new restoration would have been amazing, this transfer still holds up nicely. Details are relatively solid with a few soft shots here and there. Film grain is intact with a natural appearance. The film’s black and white photography is often stunning with deep inky blacks and a welcome sense of depth to the image with great shadow details. 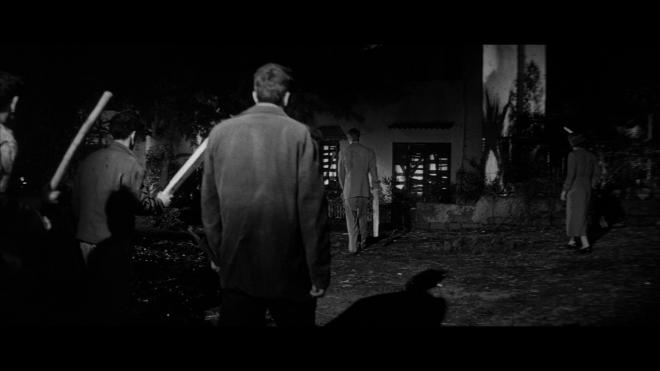 This disc also comes with what sounds like the same DTS-HD MA 2.0 audio mix. While this track is very good with clean dialog and atmosphere with a moody score, it’s also very flat. That’s largely due to the filming process where a number of Italian actors were dubbed over in English. The new voices tend to hover over the rest of the soundscape compared to Price who actually sounds like he's in the room the characters are occupying. The key scenes with the most voice work like this are found in the long flashback sequence. Throughout most of the film, it’s a great track because hardly anyone is speaking of if anyone says anything it’s Price’s own internal monolog. It's just moody atmospherics and music for long stretches. 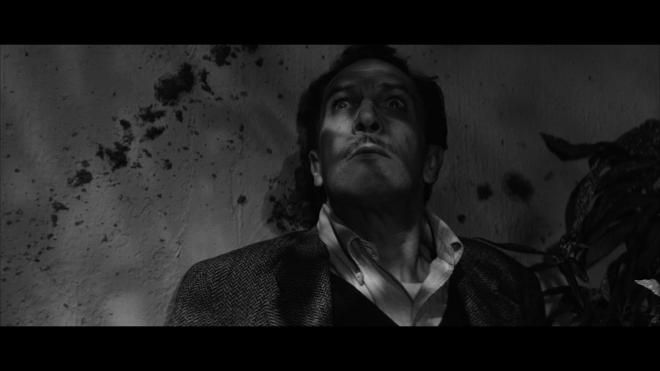 The bonus content is a little different this go around, KLSC dropped the previously available audio commentary and opted for one by Richard Harland Smith. His commentary is informative but not scene-specific so it sounds more like you’re listening to someone’s article or dissertation. It’s a good listen but Smith often feels like he could use a moderator or someone to bounce thoughts off of. The rest of the extras have either been seen before or aren’t much of note. The alternate ending omits a piece of dialog and isn’t all that different from the final version. 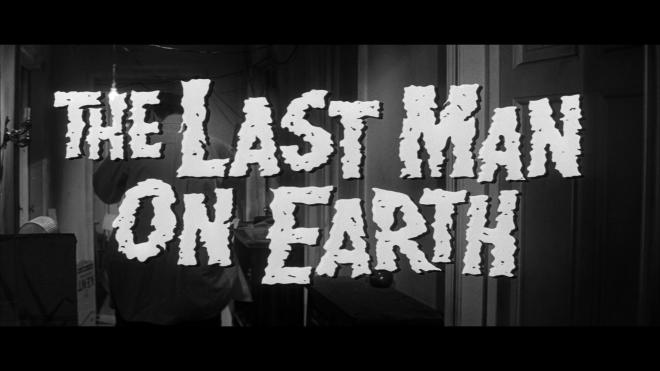 The Last Man on Earth is a genuine sci-fi/horror classic. Richard Matheson set the stage for one of the most imitated and ripped-off survival stories with his classic novel. Of the genuine adaptations, this version starring Vincent Price is the best of the pack. Its bleak imagery and Price’s excellent performance set it above the campy 70s version and the action-heavy CGI-laden version from 2007. KLSC brings The Last Man on Earth to Blu-ray for a second spin reusing the same A/V presentation from the previous box set release and offering up a smattering of new and archival bonus features. If you already have the OOP Vincent Price Collection II you’re all set. But if you still need this film in your collection, this is a worthy solo addition without the crazy after-market prices. Recommended.