One of the best and most revealing Broadway documentaries at last comes to Blu-ray, courtesy of Criterion. Original Cast Album: Company takes us into the studio for the marathon recording session of Stephen Sondheim's breakthrough musical. Egos clash, tempers flare, and vocals soar in this fascinating film that celebrates the creative process, artistic resilience, and Sondheim's genius. A brand-new restoration and lossless audio revitalize this 50-year-old documentary, and plenty of absorbing extras enhance Criterion's terrific Blu-ray presentation of a film every Broadway aficionado needs to see. Highly Recommended.

If you're a musical theater geek - and I mean a bona fide nerd - you already know all about D.A. Pennebaker's documentary Original Cast Album: Company. But if you're only a casual Broadway fan - or someone who simply respects the creative process - you need to discover this absorbing chronicle of the marathon 1970 recording session that preserved for posterity the Tony Award-winning score of one of Broadway's greatest and most influential musicals. Original Cast Album: Company doesn't just show off composer-lyricist Stephen Sondheim's catchy, brilliantly constructed songs and the talent of the show's stellar cast, it documents the technical process, vocal coaching, control-room deliberations, diplomatic ego management, and most fascinating of all, a legendary meltdown by one of the stage's most mercurial stars.

The 53-minute documentary also reminds us how cast recordings used to be made way-back-when in the pre-computerized age. Typically, the cast and orchestra would gather on the first Sunday after opening night and grind out each number until the album was completed. Though this particular session would prove especially exhausting for the performers and musicians, it begins with an infectious kinetic energy. Seeing the full ensemble lined up in front of hanging mikes belting out the title song while the orchestra plays a few yards away is nothing short of thrilling. (One of the actors sings with a lit cigarette between his fingers!) Unlike today, the engineers don't splice together takes to create the perfect version or perform any vocal tweaking in post-production; everyone just keeps doing it over and over and over again until they get it right...and the result is an old-school, organic recording that truly replicates the songs as they were performed on stage.

Company broke ground when it bowed on Broadway by brashly focusing on the problems and neuroses of contemporary characters in a series of comic and bittersweet vignettes. Up until that time, musicals either told linear, narrative stories or employed a plotless revue format, but Company cleverly merged the two while taking off in a new artistic direction. The score, which includes such memorable songs as "Being Alive," "Another Hundred People," "Side by Side," and the archly cynical tour de force "Ladies Who Lunch," cemented Sondheim's reputation as a major composer and one of Broadway's most innovative and artistic voices, while the show launched a new era of musicals that would pave the way for works by Andrew Lloyd Webber, Stephen Schwartz, Jonathan Larson, and Lin-Manuel Miranda. 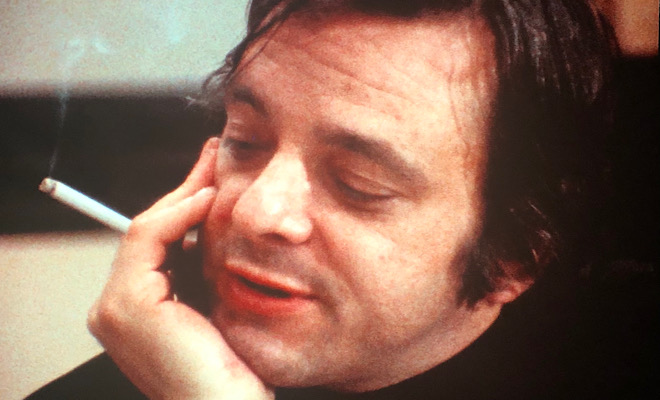 Pennebaker's film was supposed to be the first in a series of Original Cast Album documentaries, but sadly no others were ever made. (Can you imagine subsequent entries showcasing Pippin, Follies, Sweeney Todd, Evita, and Les Miz?) Thankfully, though, we have Company, and Pennebaker makes the most of his unfettered access to the recording session. Somehow his camera gets up-close-and-personal with everyone involved without in any way disrupting or intruding upon the intense, focused, occasionally fraught goings-on. He captures a quietly intense, thoughtful, chain-smoking Sondheim patiently but firmly coaching the singers, expressing frustration with a subtle head-shake, shrug, or side-glance, and ruing how he was never taken seriously as a composer. (Boy, how that would change in a New York minute after this show!) It also paints a snarky portrait of album producer Thomas Shepard, who smugly sits in the control room snidely sneering most of the time. Shepard seems to relish putting down the performers, especially Broadway legend Elaine Stritch, who was making a comeback of sorts at the time and plagued by insecurity.

Stritch is the documentary's central character and arguably the main reason why the film endures. Her larger-than-life aura grabs us from the opening frames, but as the day wears on and strains begin to show, Stritch tires, and by the time it's her turn to record her signature solo, "Ladies Who Lunch," after the rest of the cast has departed (and she's had more than a couple of drinks), she's nothing but a bundle of nerves. Still, she soldiers on, recording take after take after take, testing Sondheim's patience and driving Shepard to distraction as the hours tick by. Pennebaker incisively documents her epic, painful meltdown, allowing us to witness Stritch's grit, determination, desperation, diva moments, and even her anguished cries of exasperation upon hearing her recorded voice ("Ohhh shut up!!!"). It's not only the film's defining segment, it's also a raw, very real, intimate, often bruising examination of the evolution of a performance. (Spoiler alert: There's a happy ending.) 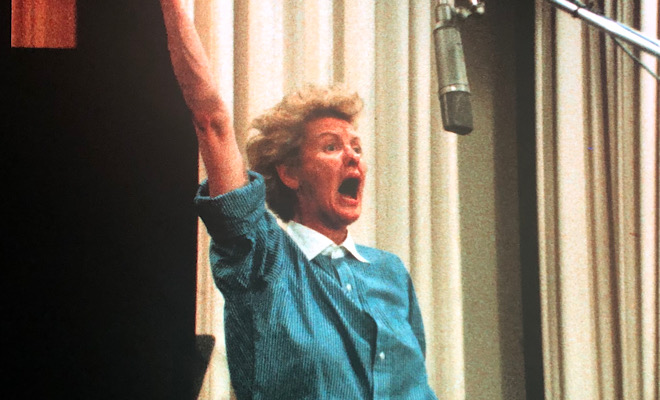 Aside from Stritch, a group of unknown actors largely comprised the original cast of Company. Almost all of them, though, would eventually make their mark in either theater, film, or television. There's Barbara Barrie (the mom in Breaking Away), George Coe (Dustin Hoffman's heartless boss in Kramer vs. Kramer), Charles Kimbrough (dithering anchor Jim Dial on TV's Murphy Brown), Donna McKechnie (the original Cassie in Broadway's A Chorus Line), and Beth Howland (Vera on the sitcom Alice). McKechnie would soon become a Broadway household name and Tony Award winner, but it's a revelation seeing and hearing the other actors who aren't generally associated with musicals.

That includes the show's star, Dean Jones, who took a hiatus from Hollywood to portray the commitment-phobic bachelor Bobby, around whom Company revolves. Like many people, I assumed Larry Kert, best known for playing Tony in the original Broadway production of West Side Story 15 years earlier, was the first Bobby, but this documentary reminded me Jones originated the role. (Kert took over the part - and played it for the bulk of the show's run - just two months after Company opened due to Jones' personal issues and unhappiness over the rigors and constraints of a Broadway commitment.) One of the highlights of Original Cast Album: Company is watching Jones put everything he has into a virtuoso rendition of "Being Alive" that Sondheim would later deem better than any of Jones' on-stage performances of the song. 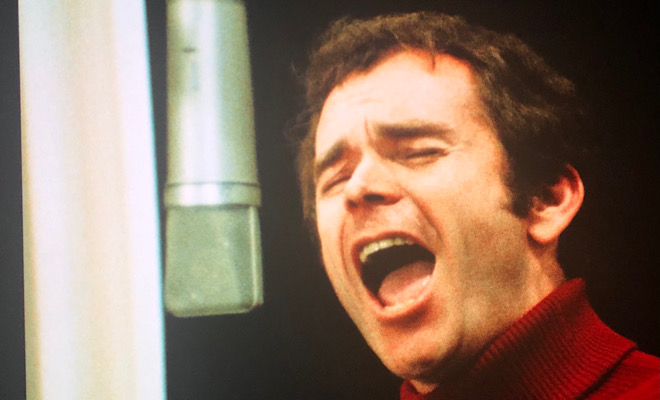 The documentary of course salutes the brilliance of Company, but watching it 50 years later, it often feels more like a love letter to Sondheim, who I first discovered as a teen in 1979 when I saw - and instantly became obsessed by - the original Broadway production of Sweeney Todd: The Demon Barber of Fleet Street. (It's still my favorite musical of all time.) We all think of Sondheim as a magnificent composer, but his lyrics truly astound. (It's easy to forget he began his career writing the lyrics for West Side Story and Gypsy.) His uncanny - and perhaps unparalleled - ability to encapsulate specific, universal emotions and attitudes in just a couple of choice words (that also rhyme!) and then set them to stirring, often breathtakingly beautiful melodies continually knocks my socks off and inspires deep admiration for his boundless talents and keen insights. Some of the Company lyrics express such visceral kernels of truth with such graceful simplicity they can almost move me to tears.

Company celebrates life and the human connections that make it worth living. Original Cast Album: Company provides a snapshot of what it takes to make the show, its ideas, and Sondheim's priceless score come alive. Interestingly, the personal interactions in the recording studio somewhat mirror the relationships depicted on stage, which is why it's a happy coincidence Company turned out to be the one cast album session to be filmed. Pennebaker, with just a 16 mm camera on his shoulder, captured lightning in a bottle, and a half century later it's still electrifying us. 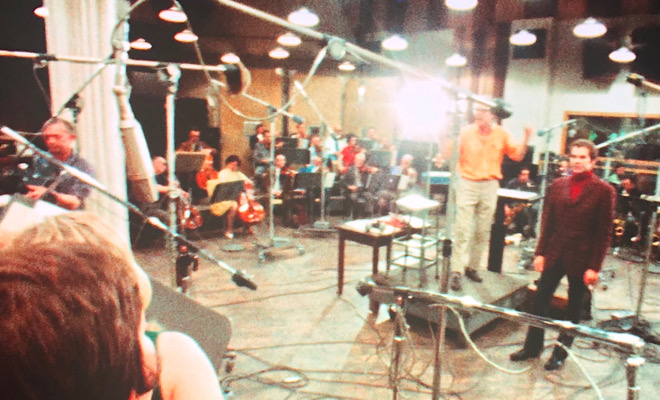 Vital Disc Stats: The Blu-ray
Original Cast Album: Company arrives on Blu-ray packaged in a standard Criterion case. A 12-page fold-out booklet featuring an essay by author Mark Harris, a cast and crew listing, some color photos, and transfer notes is tucked inside the front cover. Video codec is 1080p/AVC MPEG-4 and audio is LPCM mono. Once the disc is inserted into the player, the static menu with music immediately pops up; no previews or promos precede it.

According to the liner notes, "This new digital transfer was created in 16-bit 4K resolution...from the original 16 mm A/B Ektachrome reversal, except for the opening credits, which were restored from a 35 mm blowup." Criterion has done a terrific job with the restoration, but Original Cast Album: Company is a raw, low-budget, shot-on-the-fly documentary, so don't expect a crystal clear, glossy rendering. The 1080p/AVC MPEG-4 transfer remains faithful to the source, and the result is an intimate, organic visual experience that thrusts us into the hubbub, spontaneity, and creative energy of the recording studio environment. Grain is fairly heavy (a byproduct of increasing the resolution of the 16 mm source) and colors are a bit flat, but clarity and contrast are quite good and background elements are easy to discern. An array of extreme close-ups allows us to peer into the gaping mouths of the singers and appreciate the physical effort that goes into performing challenging material. Glistening sweat and facial hair, stubble, and wrinkles are also distinct, Sondheim's black shirt and jet-black hair are lustrous, Stritch's white blouse and cap are bright yet well defined, and only a smattering of nicks and marks dot the print. Considering the material's age and fragility, Criterion's transfer is a revelation and will blessedly preserve this rare historical document for generations to come.

The LPCM mono track was "remastered from the original 1/4-inch and 16 mm magnetic tracks," and the results are quite pleasing. From the vivacious opening ensemble number to Stritch's raw rendition of "Ladies Who Lunch" (and the anguished cries that go along with it), the track's crystal clarity, superior fidelity, and marvelous depth of tone make us feel as if we're right there in the recording studio with all the performers. A wide dynamic scale handles all the highs and lows of the vocals and orchestrations without any distortion, and though some of the mumbled asides and frustrated mutterings are unintelligible, most of the conversations are easy to comprehend. No hiss, pops, or crackle disrupt the audio either.

Original Cast Album: Company only runs 53 minutes, but thankfully Criterion has packed the disc with plenty of absorbing supplements that add context and perspective to the film and make it worthy of a full movie night.

Company cemented Stephen Sondheim's reputation as not only a clever lyricist, but more importantly a virtuoso composer who would elevate the Broadway musical to new and ever more thrilling heights, and this behind-the scenes documentary of the recording of the original cast album shows us why. D.A. Pennebaker's legendary film celebrates the brilliant score and top-notch performers and lays bare the tension, angst, euphoria, and meticulous attention to detail that define the creative process. A faithful video transfer, robust audio, and plenty of absorbing extras distinguish Criterion's excellent Blu-ray release that's a must-have for Broadway and especially Sondheim aficionados. Highly Recommended.