Creepy photography and sound design do not a great scary horror movie make. The potential for The Unholy is there, but a glut of recent similar releases on top of some notable plot shortcomings keep this creeper starring Jeffrey Dean Morgan, Cary Elwes, and William Sadler in the grave. Sony delivers a technically terrific Blu-ray but the film isn’t the best way to spend a dark and spooky evening. Rent It

Gerry Fenn (Jeffrey Dean Morgan) is a cynical investigative journalist whose professional integrity has long ago slipped to the sidelines. While trailing another story, he stumbles upon something that gets his old reporter’s blood pumping. In a small town, a deaf and speechless young girl (Cricket Brown) suddenly can hear, speak, and miraculously heal the sick. The kicker - apparently it was the doing of the Virgin Mary. Determined to uncover the hoax, Gerry discovers that forces far more malevolent are at work. 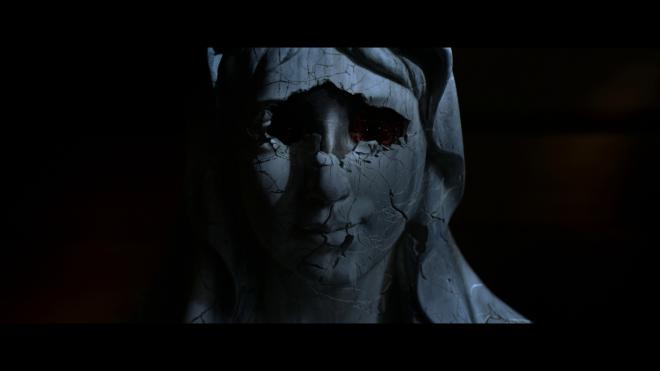 I love a good horror movie. Hell, I love a bad horror movie too when it’s entertaining. I don’t enjoy boring or uninspired horror movies that have nowhere to go. Sadly, that’s where we find Evan Spiliotopoulos’s foray into spiritual horror with The Unholy. In the wake of so many Conjuring sequels, spinoffs, and imitators I was ready for a spiritual horror film that takes its time and tries to weave something of a mystery. It didn't have to be amazing, just try to be something a little different. Only the problem is there’s no mystery and the film gives up any pretense of trying to create something new very quickly.

Jeffrey Dean Morgan shows up for work as Gerry. Always ready to give a solid performance, you can feel Morgan working to give his thin character some range. He’s the surrogate for the audience, he’s the man who is supposed to uncover little bits about the happenings and goings-on. When he starts to dig deeper into the town’s history and the new miracles, some amount of dread and suspense should build. Are there actually spiritual forces at work or is this a hoax? If there are spiritual forces are they for good or evil purposes? The answer to that comes all too quickly leaving the film with a solid hour to try and scare you only you already know what’s happening so there’s no mystery or thrills to be enjoyed.

As I earnestly tried to enjoy and appreciate The Unholy I couldn’t help but feel like I was watching The Mothman Prophecies only without the great cast, the serious approach, and the moody sense of atmosphere and tone. That film knew what to hold back and what to reveal. The Unholy throws everything on the plate. Just when it feels like it’s going somewhere interesting the show pulls its punches revealing far too much without care for building any kind of tension. Remember future horror writers and filmmakers - it’s what you don’t show that’s actually scary so when you finally do reveal your monster there’s something left to be genuinely afraid of. A CGI herky-jerky demon that looks like so many other monsters of its type in other movies doesn't cut the mustard.

Vital Disc Stats: The Blu-ray
The Unholy possesses your Blu-ray player thanks to Sony Pictures with a single-disc Blu-ray + Digital set. Pressed on a BD-50 disc, the disc loads to a massive number of trailers - that you thankfully can skip - before arriving at an animated main menu with traditional navigation options.

As I said in my review, The Unholy looks terrific. The digitally sourced 1080p 2.39:1 transfer is a clean crisp image with impressive details, appropriately drab coloring, and some nice deep inky shadows to play with. Even with all of the dull gray tones of the film, facial features, costuming, and the impressive production design work comes through perfectly with room for some strong primaries. Shadows and the deep black levels give the image a sense of three-dimensional depth. Those shadows and dark spots are the perfect places for something creepy to linger setting the mood and tone nicely. Free of any compression issues or artifacts of any kind, this is a first-rate 1080p transfer.

I guess it should be something of a sign when the best part of the film happens in the opening credits - and that’s largely because of the impeccable sound design. This DTS-HD MA 5.1 track oozes atmosphere. From cold winds to creaky tree branches to the unsettling opening torture sequence where you can hardly see a thing and can only listen to the action - it’s a great mix! Dialog is clean and clear throughout without issues. The mix is well-balanced with the front/center channels doing a lot of the heavy lifting while surrounds work in the creepy pinpoint placement effects, scoring, and atmospherics. Technically speaking this is a truly splendid horror movie sound mix, I just wish the movie was a better place to hang the effort.

Those trailers for other upcoming Sony releases at the start of the disc are the sum total of all the bonus features on this disc. So - nothing.

I tend to give horror movies a lot of rope. So many filmmakers think it’s an easy genre to work in, but it really isn’t.  Especially if you’re just aping tricks and themes that have already been beaten to death by other better - or worse - films. The Unholy has an interesting premise behind it, but the uninspired execution squanders a deeply unsettling opening scene and becomes a 99-minute exorcise in mediocrity. This disc from Sony is technically speaking a solid release with a great A/V presentation. But the film isn’t much to speak of so if you’re curious try before you buy. Give It A Rent