A nerdy scientist, madcap socialite, impish dog, and oh-so-problematic leopard make up the oddest quartet in movie history, and their hysterical antics make Bringing Up Baby one of Hollywood's best loved screwball comedies. Katharine Hepburn and Cary Grant join forces for this riotous Howard Hawks romp that delivers more laughs per capita than almost any other film in its class. Criterion's new restoration from subpar film elements looks surprisingly good, while solid audio and an array of fascinating supplements enhance the appeal of this long-awaited Blu-ray release. No comedy collection is complete without this timeless gem that remains a giant in its genre. Must Own.

Unlike fine wine, humor doesn't usually age well. Jokes that tickle the funny bone in one era often lay an egg in another, and that goes for movie comedies, too. Somehow, though, Bringing Up Baby defies the odds and still feels fresh more than eight decades after its premiere. Maybe it's because director Howard Hawks' divinely silly screwball farce about a nerdy paleontologist, feather-brained heiress, and pet leopard named Baby received a lukewarm reception when first released in 1938. (It only lasted a week at New York's famed Radio City Music Hall.) Perhaps its comic seeds needed time to germinate or the moviegoing public needed time to evolve. Whatever the case, as the years passed, instead of waning, the reputation of Bringing Up Baby grew by leaps and bounds, and by the 1970s critics and audiences alike touted this modest madcap romp as one of the most hilarious movie comedies ever made.

Bringing Up Baby is still a hoot today, and its secret may lie in a seemingly innocuous - but really quite profound - comment made by Hawks to director Peter Bogdanovich in a 1972 interview. Hawks recalled "30 people in Paris" (most likely intellectual film critics) asking him what his thought process was while shooting the picture, and Hawks said he flatly responded, "Nothing. I just thought it was funny." And it's that simplicity, that purity of form that helps the film endure. There's no deep underlying message, no arch social commentary, or even any astute observations about male-female relationships coursing through the script. It's just plain funny. 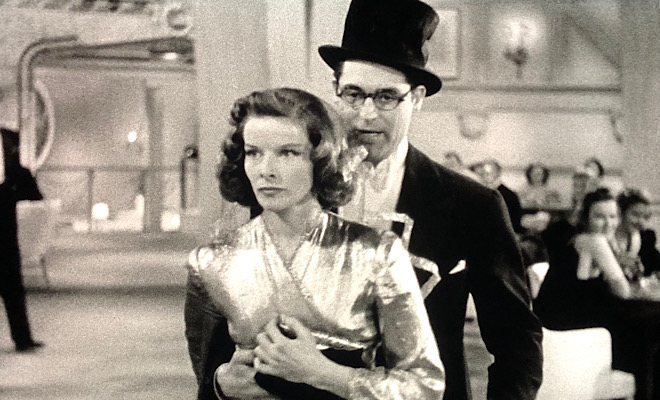 Without affectation, Bringing Up Baby revels in its inanity with an infectious childlike glee. Like its befuddled main character, David Huxley (Cary Grant), who simply wants to obtain a $1 million grant to fund his museum and get his stone-faced, controlling fiancée (Virginia Walker) off his back, we get swept up in a preposterous comic maelstrom we can't control, so we just give in and go with It. The ever-endearing idiocy takes innumerable twists and turns, and by the end of the film we simply do what David does...just shrug our shoulders and say "Oh well..."

The story, which focuses on the ceaseless attempts of daffy socialite Susan Vance (Katharine Hepburn) to make the perennially exasperated and confused David fall in love with her, is as scattershot as its heroine. A missing, highly coveted dinosaur bone adds complication to the plot, but why is there a pet leopard skulking around? Well, it's a gift from Susan's brother to her cantankerous Aunt Elizabeth (May Robson), who supposedly always wanted one. Huh? "Baby," who is strangely tamed by listening to the popular song "I Can't Give You Anything But Love," isn't even the narrative's focal point; he's just another disjointed lunatic element in a movie that brims with them. 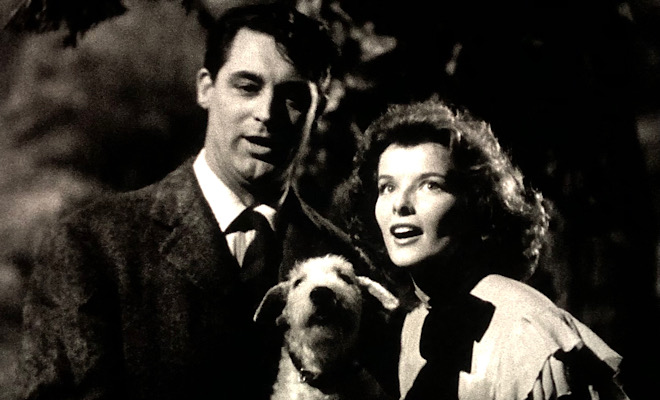 Only actors of Hepburn and Grant's magnitude could so perfectly and effortlessly put such silliness over. To think Hepburn had never before attempted comedy and here she rivals screwball queen Carole Lombard is almost too much to fathom, but her matter-of-fact demeanor, carefree attitude, and intoxicating sense of the absurd combine to make all the on-screen mayhem seem almost normal. Amazingly, the same year Bringing Up Baby came out, Hepburn was labeled Box Office Poison by a group of independent theater owners. That notorious distinction, along with Baby's tepid reception, soured RKO's attitude toward the actress, and rather than appear in a dreadful piece of drivel called Mother Carey's Chickens, Hepburn bought out the remainder of her contract. Hard to believe what would later be considered one of the greatest comedies of all time could cause such career upheaval.

Bringing Up Baby would mark the second of four times Hepburn and Grant would co-star together and their fantastic chemistry propels and sustains the film. George Cukor directed the pair in their other three movies, but Hawks allows both actors the freedom to play, explore, and truly let their hair down. The practice yields rich rewards, as evidenced by this classic scene that exemplifies how Hepburn and Grant utterly embrace the story's sublime lunacy:

Hepburn is marvelous, but Bringing Up Baby belongs unequivocally to Grant. With his Harold Lloyd peephole glasses and frequently mussed up hair, he's the epitome of the clichéd cloistered intellectual who knows nothing of the world in which he lives. Grant, a former circus acrobat, brilliantly uses his body to project David's social and physical awkwardness and complete bewilderment over his preposterous predicaments. (His initial reaction when he first lays eyes on the leopard is uproarious.) In addition to hysterical facial expressions and an array of agitated vocal gyrations, he performs a series of impeccably executed pratfalls and memorably ad-libs the word "gay" in a scene long before it was commonly linked to homosexuals. Decide for yourself what the meaning behind it might be by watching the clip below:

Coupled with his breakout performance in another classic screwball comedy (The Awful Truth) the previous year, Bringing Up Baby completed Grant's ascension to mega-stardom. He and Hawks would make four more films together over the next 14 years, including such comedy classics as His Girl Friday, I Was a Male War Bride, and Monkey Business, which casts Grant as much the same character as he plays here. They also would have made Gunga Din together if Bringing Up Baby's ballooning budget and disappointing box office returns didn't prompt RKO to remove Hawks from the project and replace him with George Stevens.

Hawks employs terrific special effects, which were state-of-the-art at the time, to seamlessly incorporate the leopard into the action, as well as Asta, the famous Thin Man dog who also "co-starred" with Grant in The Awful Truth. Breakneck pacing, overlapping dialogue, and wonderful supporting turns from 80-year-old May Robson (who was born before the start of the Civil War!), Charles Ruggles, Barry Fitzgerald (in one of his first films), Walter Catlett, and Leona Roberts (Mrs. Meade in Gone with the Wind) also contribute greatly to the film's success.

Bringing Up Baby may not have lit the world on fire when first released, but its comic flame still burns bright today. At a time when the world seems to be collapsing around us, the blissful stupidity of the story and boisterous shenanigans of its characters help lift our collective spirits. And thanks to Hepburn, Grant, and Hawks, this screwiest of screwball comedies continues to titillate, delight, and - like fine wine - endure. 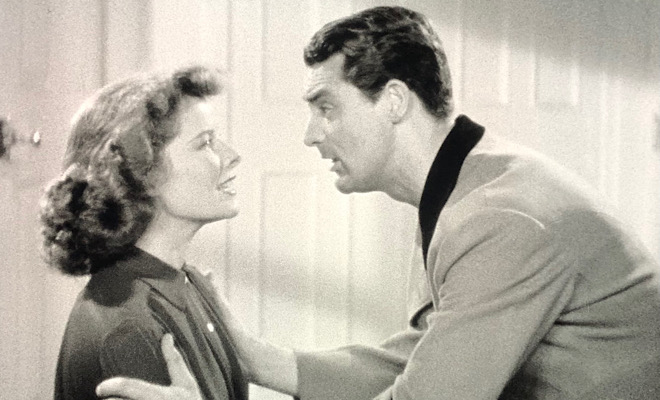 Vital Disc Stats: The Blu-ray
Bringing Up Baby arrives (at last) on Blu-ray packaged in a standard Criterion case. A lavish 40-page booklet featuring an essay by film critic Sheila O'Malley, the original short story by Hagar Wilde upon which the film is based, a cast and crew listing, restoration notes, and plenty of beautifully reproduced black-and-white scene shots is tucked inside the front cover. Video codec is 1080p/AVC MPEG-4 and audio is LPCM mono. Once the disc is inserted into the player, the static menu with both music and Hepburn and Grant singing "I Can't Give You Anything But Love" immediately pops up; no previews or promos precede it.

Criterion went to great lengths to restore Bringing Up Baby, and though the company's admirable efforts don't yield the impeccable transfer aficionados of this classic comedy so dearly desired, the end result is still quite good. The liner notes state:

"Bringing Up Baby is presented in its original aspect ratio of 1.37:1. Its existing film elements are few and problematic. Working with the Warner Bros. archive, preservationist Craig Johnson identified the two best pieces of film: a 35 mm nitrate duplicate negative from the British Film Institute and a 35 mm fine-grain positive. The archive scanned both elements at Motion Picture Imaging in Burbank, California, and Criterion Collection restorers pieced them together to create the highest-quality version possible. Although the nitrate duplicate negative retained a good underlying image, it was riddled with mold that the digital restorers were unable to remove, while the fine-grain positive was fourth-generation and didn't look nearly as good. The nitrate film was then sent to Image Protection Services in Burbank for a test on a wet-gate film scanner, which proved to virtually eliminate the mold from the image. The element was subsequently rescanned in its entirety in 16-bit 4K resolution on a wet-gate Oxberry film scanner."

Some evidence of mold remains and can be occasionally glimpsed on the edges of the frame, but the image as a whole remains remarkably clear and vibrant throughout. Grain is fairly heavy, but it lends the picture an authentic film-like feel. Several scenes look overly bright - almost overexposed - leading to washed-out whites that lack appropriate definition, but rich blacks and nicely varied grays heighten detail and depth levels. Close-ups run the gamut from sharp to diffused, but shadow delineation is quite good and only a few errant strands at the bottom of a few frames sully the otherwise clean image. Some scenes appear softer and fuzzier than others, but overall this is a very watchable 1080p/AVC MPEG-4 transfer that should satisfy the movie's diehard fans.

According to the liner notes, "the original monaural soundtrack was remastered from the 35 mm optical tracks found on the same picture elements," and the resulting LPCM transfer supplies clear, well-modulated sound without any age-related hiss, pops, and crackle mucking up the mix. Sonic accents like Asta's incessant barking, Major Applegate's moaning leopard calls, the crunching of metal when Susan's car scrapes against David's, the mean leopard's snarls and growls, and the collapse of the brontosaurus are all wonderfully crisp, and all the rapid-fire dialogue is easy to comprehend. Except for the opening titles and closing credits, Bringing Up Baby only uses incidental music, but a wide dynamic scale nicely handles all of its highs and lows without any distortion. Though the audio lacks richness and nuance, it suits this screwball farce well and does its job with a minimum of fuss.

A wonderful array of extras enhances this long-awaited Blu-ray release.

One of the all-time classic screwball comedies at last comes to Blu-ray! Side-splitting slapstick antics, rapid-fire dialogue, and the timeless allure and sparkling performances of Katharine Hepburn and Cary Grant make Bringing Up Baby an unequivocal joy from start to finish. Director Howard Hawks orchestrates the mayhem as only he can, and though Criterion's new restoration never quite meets our lofty expectations, it makes the most of less-than-optimal film elements. Solid audio and a comprehensive array of quality supplements sweeten this long-awaited release that demands a prominent spot on every film buff's shelf. Must Own.