Fight crime, shoot back - Paul Donovan and Maura O’Connell’s Siege is prime Grade-A Canuxploitation at its finest. Owing a debt to other classics in the shooting gallery genre, Siege may be low-budget simple means filmmaking, but it’s a smarter film than it looks offering prescient thematic elements on top of blood-soaked thrills. This highly entertaining, action-packed thriller takes a shot at Blu-ray glory thanks to Severin Films. Offering two cuts of the film, an excellent A/V presentation, and a decent assortment of bonus features. Recommended

The Halifax police department is on strike. Crime is effectively legal in a city of nearly 300,000 people. On this night, a band of right-wing vigilant sociopaths led by a man called Cabe (Doug Lennox) takes to the streets to hold their own brand of law and order. Only they’re not out to stop looters or prevent rapes or catch murderers; they target the local gay bar for some societal cleansing. After executing nearly all of the patrons, a lone survivor escapes to an apartment building for help from the innocent people inside. Armed with only a single rifle, a makeshift PVC pipe bazooka, and their wits - the residents will have to face an onslaught of bullets to save the young man and their own lives. 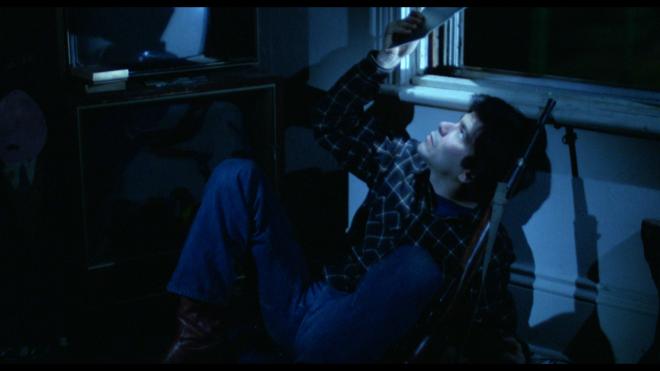 Sometimes you don’t need a huge budget to tell a big story and have it stick. Directing a movie is more of a series of problem-solving adventures than it is pointing the camera and telling actors what to do. Can’t afford squibs or blanks? Your bad guys have silencers and you have sound effects. Can’t afford big scale mean street action? Keep the action indoors in small room locations. Can’t afford a huge cast of thugs? Don’t show them and use sound effects to simulate a large group. You can make a big feeling movie out of a small box of tools as long as you’re creative with said tools. Siege may have a small box of tools, but it's impressively creative.

Paul Donovan and Maura O’Connell’s Siege (also known as Self Defense in the U.S.) is a stripped-down Shooting Gallery picture. A band of few attempting to survive against a well-armed army of many. This is my little pet term for films like John Carpenter’s action flick Assault on Precinct 13, or westerns like Rio Bravo. Aliens would also be a candidate for Science Fiction. You get the good guys trapped in a small space where the bad guys can pick at them little by little until you’re down to just your key core cast members.

Using the backdrop of a real-life police strike makes a little movie like Siege feel bigger than it is. Unfortunately, in nearly 40 years, this film isn’t much of an exaggeration of real-life events after the Kenosha protest shooting or the Pulse massacre. There are still groups of people under the delusion they’re the moral and legal police above all others including the actual laws they pretend to uphold. This film's opening is gutwrenching, to say the least. The longer cut gives an extended opening introducing some of the characters and their home lives making that massacre scene all the more impactful because it removes the randomness of the first murder. While it may hit hard with recent events, Siege is still damned entertaining giving you a reason to root for the little guy against a band of thugs who deserve their gory comeuppances. 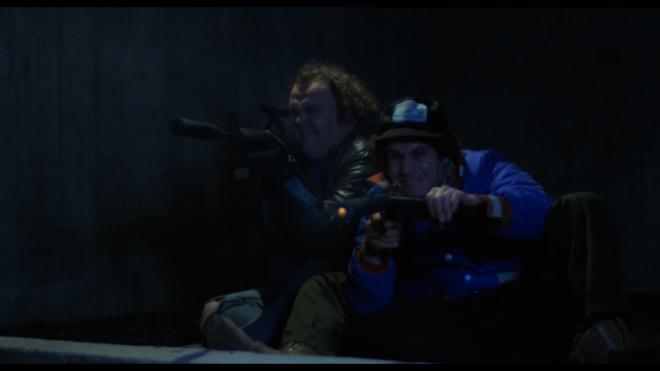 When I turned 30 I went on a long kick to try and see every movie from 1982. Sadly I didn’t get very far in that goal and Siege was an elusive piece. I just wasn't willing to pay a crazy price for what was probably a VHS dupe on a bootleg DVD. Thanks to Severin Films this is a big checkmark off that long list of films. I had no expectations going in and was pleasantly surprised at how well done it was. It’s a movie that shows its budget on the sleeves of every denim jacket, but it makes good with what it had to work with. The cast is solid, amiably selling the premise while Donovan and O’Connell keep the action and suspense building to the very end. If you’re a connoisseur of Canuxploitation or have a big heart for low-budget gems, keep Siege on your radar.

Vital Disc Stats: The Blu-ray
Siege arrives on Blu-ray courtesy of the fine folks at Severin Films in a single-disc release. Pressed on a Region Free BD-50 disc, the disc is housed in a standard sturdy black case with ocard slipcover and alternate insert artwork. The disc loads to an animated main menu with traditional navigation options. The default version when you hit play is the shorter 84-minute cut. The longer and arguably better Extended Cut is found in the bonus features menu. 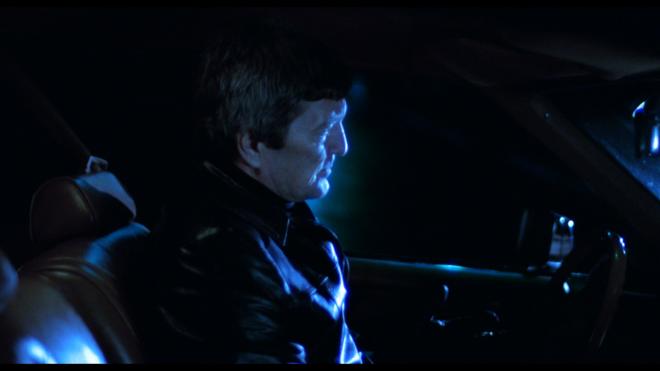 Siege assaults Blu-ray with a splendid 1080p 1.85:1 transfer sourced from a 2K scan of the original camera negative. Elements are in good shape overall, there’s some slight speckling here and there, the opening few minutes of the Theatrical Cut are a bit rough (the Extended starts very differently with a longer prologue) but it all evens out and is relatively clean and clear going forward. Film grain is robust, there are some noisier sequences here and there but it maintains an organic film-like appearance. Details are strong offering solid looks at facial features, costuming, and modest production values. There are a few soft shots here and there but those seem to be cooked in with the original photography than anything wrong with the transfer. Black levels are in good shape, a couple of the darker scenes are a little thick but nothing too tough for comfort. All in all, for a little film that’s hardly been seen in 40 years, this is a great presentation. 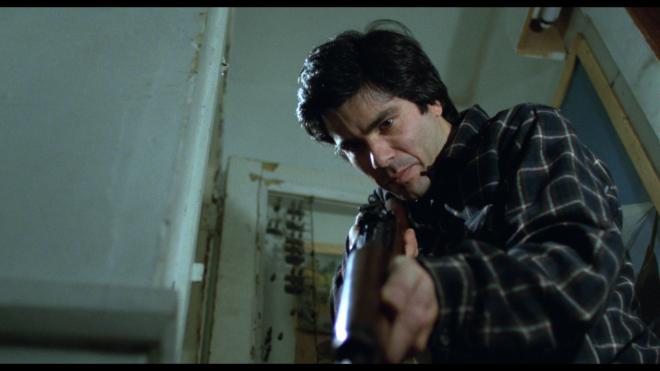 Siege gets the most of what it can out of the DTS-HD MA 2.0 mono track. Dialog is clean and clear throughout - there are a couple of line reads that sound like they didn’t get any later clean-up work or rerecording and can sound a little soft, but not so bad you can’t hear what they’re saying. The great synth score from Drew King and Peter Jeymyn is a tad strong at times and comes close to overpowering the mix - but it’s still solid stuff and helps add tension to the mood. Sound effects and atmospherics are impressive considering the size of the film and what it’s aiming to pull off; there’s plenty of imaging to keep things lively without sounding flat or too confined. 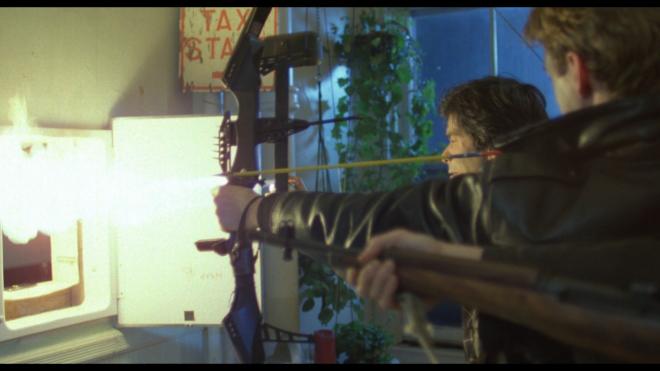 While not a huge assortment of bonus features, I’m including the extended cut of the film (and in my view the better version) as a bonus feature since that's where you access it. The extra scenes and character exchanges may lengthen the film, but I feel like it improves the overall pace and establishes the feeling of "normal" before the chaos begins. It adds premeditation to the opening assault giving that event more weight. This disc also includes a nice commentary featuring co-director Paul Donovan with Jason Eisener that's well worth listening through with a trailer rounding out this band of extra features. 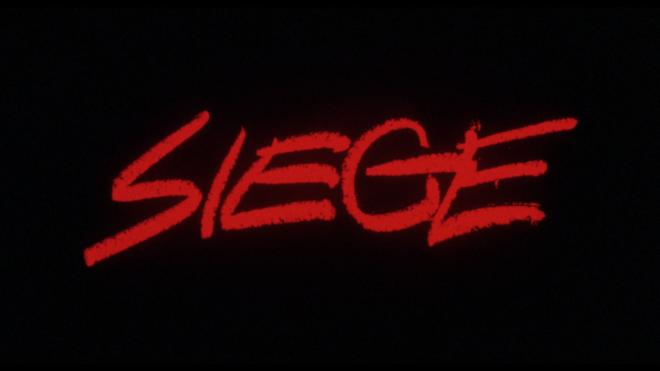 After waiting a long time to finally get to see Siege, the wait was worth it. This Canuxploitation classic was a surprisingly effective and visceral experience. It was one of those that came recommended and more than lived up to expectations. Its story may be on the simple side, but it’s well done with some thematic elements that feel surprisingly current. Severin Films gives this low-budget gem a worthy Blu-ray release with an overall very good A/V presentation, both cuts of the film, and an interesting engaging commentary track. If you love down and dirty gritty action exploitation movies coated in a thick suit of denim, keep Siege on your radar. Recommended