After a harsh childhood, orphan Jane Eyre is hired by Edward Rochester, the brooding lord of a mysterious manor house to care for his young daughter.

Retold and modified in over fifty different versions across a variety of mediums around the world, Charlotte Brontë's 1847 novel Jane Eyre remains a classic tale of two disparate, destitute, and stubborn souls discovering an unexpected passion for one another. Of those various productions, Robert Stevenson's 1943 adaptation endures as one of the finest and most stunning interpretations. Celebrating its 70th Anniversary, it still has the power to leave audiences awestruck by its grace and elegance. Although not particularly faithful, the film is cherished and admired for perfectly capturing the essence and mood of Brontë's novel and at least exploring a couple of the plot's many themes.

From a script co-written by Stevenson with author Aldous Huxley ('The Devils,' 'Pride & Prejudice (1940)') and future award-winning actor John Houseman ('The Paper Chase,' 'The Bad and the Beautiful'), this wonderful reworking concentrates on Brontë's concerns with social class and gender. At the start, our titular heroine, played as an orphaned child by the highly talented Peggy Ann Garner, experiences first-hand so-called charity by those claiming the religious higher ground. The poor and needy are unsightly creatures lacking a spiritual strength that can only develop from arduous labor and unsympathetic reminders of their insignificance. This is a poignant aspect which surely resonated with audiences of the period, but more importantly, continues to ring true to this day.

Making viewers immediately love and respect her, Jane, who has grown into the gorgeous Joan Fontaine, suffers and weathers the cruelty of the self-professed righteous due to a strong will and a tenacious sense of individuality. When confronted by the darkly intimidating and miserably brooding figure of Edward Rochester (Orson Welles), she finds a personality similar to her own. Only, it's the result of a socially-shameful secret which has hardened into an exterior that's difficult to break through. Welles, who at the time desperately needed a hit after two box-office failures and wanted to establish himself as an actor, does a phenomenal job in a role that has us dislike him while also pity him for his gloominess. His conversations with Jane make clear his feelings for her, but the demands of his aristocrat class deny the opportunity to explore them. 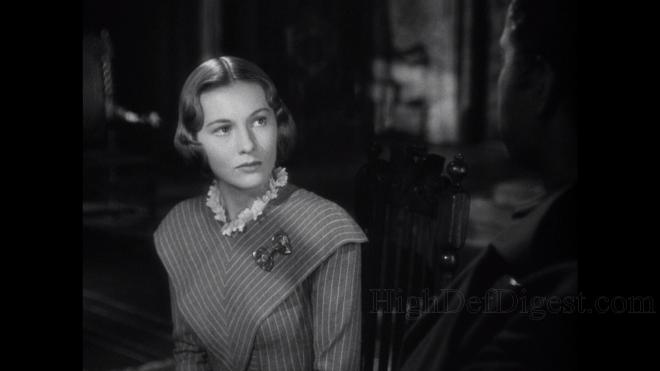 As if the outstanding performances of the cast weren't enough, the film continues to amaze and astound with the lush, distinguished cinematography of George Barnes, the same brilliant eye behind Alfred Hitchcock's hauntingly gorgeous 'Rebecca.' To be perfectly honest, the photography is arguably the production's most noteworthy feature where Barnes makes brilliant use of William L. Pereira's tenebrous and cryptic stage design. The mood and melancholic atmosphere of Edward's Thornfield Hall is strictly expressed through Barnes's dazzling camerawork and spooky use of shadows. Even before that, he demonstrates his talent in an earlier scene with the young Jane on her first day at the boarding school where Reverend Brocklehurst (Henry Daniell) attempts to break her spirit. While made to stand on a chair for hours, the shadows of the rafter above fall on the small, lonely frame of a child. Done in extreme wide-shot, the image straightaway creates a feeling of oppression and a spiritual imprisonment that's heartbreaking, setting the mood for the film.

Stevenson takes advantage of the photography with many fluid camera movements, a few very interesting slight focal blurs and even more impressive several deep focus shots that terrifically capture Jane's feelings of distance from the upper class. When seeing the immense beauty of something like 'Jane Eyre,' it's a shame the classic film is not better recognized or cherished by contemporary moviegoers, an eloquent and beautifully expressive accomplishment of filmmaking expertise. Robert Stevenson, the director of several Walt Disney classics such as 'Mary Poppins,' 'The Love Bug' and 'Old Yeller,' is a little remembered name but should nonetheless be respected, and 'Jane Eyre' is arguably his most proficient work, a gothic masterpiece of vast splendor.

Robert Stevenson's 'Jane Eyre (1943)' comes to Blu-ray as a Limited Edition release courtesy of Twilight Time. The Region Free, BD50 disc is housed in the standard blue keepcase accompanied by an eight-page booklet with a thoughtful essay written by screenwriter Julie Kirgo. At startup, the disc goes straight to a static menu with the usual options.

The beautiful 1943 classic arrives on Blu-ray courtesy of Twilight Time, which means the quality of the picture is based on the condition of its source. For the most part, the elements are in fairly good shape, providing a pleasing and very watchable 1080p/AVC MPEG-4 encode. It's apparent the distributor has attempted some minor restoration efforts, as the video looks clean for a majority of the runtime. The occasional scratch, white speck and vertical line appears from time to time, but they're pretty faint and easy to ignore. Other scenes, however, are poorly resolved, leaving us with several moments of blurriness and softness. Yet, a good chunk of the film is nicely detailed with well-defined lines in clothing, furniture and the gothic stage design of the mysterious manor.

Presented in a 1.33:1 framed picture, the high-def presentation displays strong, well-balanced contrast and brilliant, clean whites. Black levels are also rich and full-bodied with excellent visibility of the finer details in the shadows. Although it could be better if given a proper restoration of the original elements, the video is generally pleasing.

Where the overall package is sure to delight fans is in the very good DTS-HD Master Audio mono soundtrack. With an excellent sense of presence and acoustical detailing, the soundstage is gratifyingly wide and welcoming. Dynamic range is decently extensive for a design of this vintage, exhibiting only a bit of mild distortion and noise in one or two moments. The stirring, passionate score of Bernard Herrmann is given plenty of space to breathe with outstanding clarity in the orchestration. Bass is appreciable, providing some weight and depth to the music as well as the few bits of action. Only issue worth noting is in the vocals, which for the most part are strong and intelligible but can at times also seem hollow and disconnected. All things considered, however, the lossless mix is great and does the film justice.

Bonus material is ported over from Fox's 2007 DVD release.

Celebrating its 70th Anniversary, Robert Stevenson's 1943 adaptation of Charlotte Brontë's 1847 novel is a stunning, gorgeous motion picture with lush, moody cinematography by George Barnes. 'Jane Eyre' is a classic film that should be cherished for its eloquent and beautifully expressive accomplishment in filmmaking. Despite the picture quality not meeting today's Blu-ray standards, the video is still an improvement over its DVD counterpart and the audio presentation is also quite satisfying. With special features ported over from the previous release, this Blu-ray edition is one fans will be happy and proud to display in their collections.