The joys and nightmares of home ownership never change, and Mr. Blandings Builds His Dream House chronicles those euphoric highs and exasperating lows with priceless humor, warmth, and insight. Cary Grant and Myrna Loy, with sardonic support from Melvyn Douglas, doggedly pursue the American dream in this top-notch comedy that never gets old no matter how many times you see it. Like a fresh coat of paint, Warner Archive's brand new 4K restoration struck from the original camera negative spruces up this hilarious 1940s gem that still rings true more than seven decades later. Highly Recommended.

For anyone who's ever endured the headaches, spiraling costs, and endless decision-making of home construction - or for those foolhardy (I mean brave!) souls ready to take the plunge - Mr. Blandings Builds His Dream House is required viewing. It doesn't matter that director H.C. Potter's sharp, cynical comedy was made way back in 1948; the problems the Blandings face remain maddeningly relevant and identifiable today. And with Cary Grant bringing his customary comic flair to the title role, this domestic romp breezes by and maintains its stature as a beloved classic.

Jim Blandings is a frazzled advertising executive battling burnout, two precocious children, and an overstuffed Manhattan apartment bursting at the seams. Lured by the slogan "Come to peaceful Connecticut" and the promise of a gentrified country life, Jim and wife Muriel (Myrna Loy) begin house-hunting. An unscrupulous realtor (Ian Wolfe) sells them a ramshackle residence for a king's ransom, and before anyone can say “welcome home,” the financial hemorrhaging begins. One inspector after another informs the Blandings their crumbling hovel is beyond repair, so the couple razes the house and starts anew, yet their grandiose plans dumbfound their level-headed architect (Reginald Denny) and far exceed their budget.

Still, the Blandings bite the bullet and forge ahead, only to find themselves at the mercy of various contractors who nickel and dime them over every square foot and innocuous request. Soon the exasperated Mr. Blandings begins to question the merits of the American dream and worries his dream house will ultimately send him and his family to the poor house. 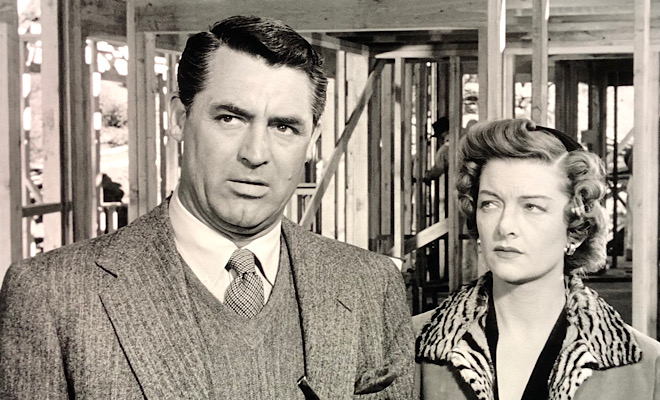 The slick screenplay adapted from the novel by Eric Hodgins pokes fun at both the naive Blandings and the country workmen who manipulate them like puppeteers. In a bit of social reversal, it's the plain Connecticut folk who look down their noses at the clueless city slickers and hope to give them a much-needed reality check. Melvyn Douglas, as family friend and legal advisor Bill Cole, levels the playing field with deliciously blunt commentary on the Blandings' adventures. Douglas laces his barbs with a sardonic edge that nicely offsets Grant's sophistication, and his character's standing as Muriel's old flame adds a dash of romantic complication to the brew.

Grant proves time and again he's one of the best physical comedians in Hollywood history. With a grace and style his more obvious counterparts lack, he inspires big laughs with small gestures, getting more mileage out of a double take, agape reaction, raised eyebrow, or withering glare than most actors do with an elaborate pratfall. Here, he's utterly in his element, spicing his dialogue with a dry wit and bemusement no other actor on the planet can match. He makes Jim Blandings the quintessential everyman and effortlessly draws us into his world.

Often dubbed Hollywood's "perfect wife," Loy makes a fine foil, quietly weathering Grant's manic outbursts while providing thoughtful sympathy and support. Yet just because Grant gets the showiest scenes doesn't mean he monopolizes all the humor. Loy is at her understated best here, and a scene in which she tours the house with a befuddled painter, meticulously outlining the exact shades of color for each room ("I want it to be a soft green - not as blue-green as a robin's egg, but not as yellow-green as daffodil buds"), remains one of the film's funniest sequences.

A light yet pointed comedy sure to amuse the entire family, Mr. Blandings Builds His Dream House defies its age and proves many basic elements of domestic life never change. It may not stop you from constructing your own country castle, but will surely make the process (and its unavoidable stresses) easier to endure. Even those happily ensconced in their current abode will find plenty to laugh about with Grant, Loy, and Douglas. 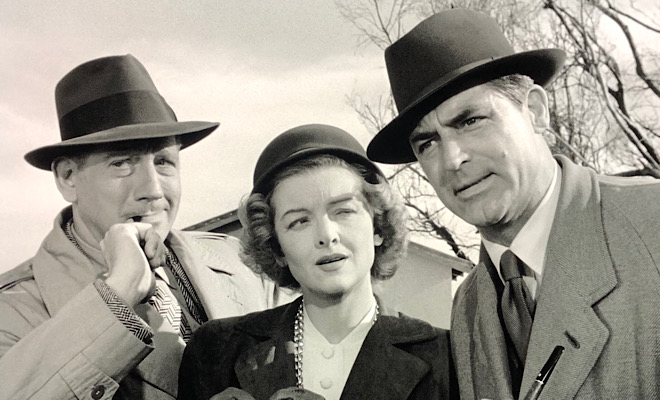 Vital Disc Stats: The Blu-ray
Mr. Blandings Builds His Dream House arrives on Blu-ray packaged in a standard case. Video codec is 1080p/AVC MPEG-4 and audio is DTS-HD Master Audio 2.0 mono. Once the disc is inserted into the player, the static menu with music immediately pops up; no previews or promos precede it.

A brand new 4K restoration struck from the original camera negative yields a beautifully vibrant 1080p/AVC MPEG-4 transfer that features terrific contrast and clarity and flaunts a lovely film-like feel. Grain fluctuates a bit, but remains unobtrusive most of the time, and fine details like the blueprint markings in the opening credits, wallpaper and curtain patterns, and the texture of costume fabrics are easy to discern. Rich blacks anchor the image, vivid whites resist blooming, and the nicely varied grays in between heighten depth and provide essential shadings. Some scenes err on the bright side, which washes out the grays just a tad (the DVD suffered from the same syndrome), but such instances are brief and don't detract from the viewing experience. The few nicks and marks that dotted the DVD transfer have been erased and no digital anomalies mar the presentation. Does Mr. Blandings get a dream transfer? Not quite, but darn close.

The DTS-HD Master Audio 2.0 mono track supplies clear, well modulated sound. All the construction noise, from drills and hammering to falling planks of wood and crumbling roof shingles, is crisply rendered, atmospherics like rain and chirping birds come through cleanly, and the sprightly music score by Leigh Harline fills the room with ease. All the clever dialogue is easy to comprehend and any age-related hiss, pops, or crackle that were present on the previous DVD have been erased. Though sound doesn't play a huge role in Mr. Blandings Builds His Dream House, this track handles what's thrown at it with aplomb.

All the extras from the 2004 DVD, with the exception of the Cary Grant trailer gallery, have been ported over to this Blu-ray release.

Funny, warm, smart, and - for many of us - oh-so-relatable, Mr. Blandings Builds His Dream House stands as one of Cary Grant's best comedies and remains as fresh and lively today as it must have seemed upon its initial release 73 years ago. Warner Archive's new 4K restoration struck from the original camera negative spruces up this family classic that features slick direction, sparkling performances, and a terrific script. Highly Recommended.