Overview - After his father’s accidental death, Kale (Shia LaBeouf) remains withdrawn and troubled. When he lashes out at a well-intentioned but insensitive teacher, he finds himself under a court-ordered house arrest. His mother continues to cope, working extra shifts to support herself and her son, as she tries in vain to understand the changes in his personality. The walls of his house begin to close in on Kale as he takes chances to extend the boundaries both physical and emotional – of his confinement. His interests turn outside the windows of his suburban home toward those of his neighbors, including a mutual attraction to the new girl next door (Sarah Roemer). Together, they begin to suspect that another neighbor is a serial killer.
OVERALL
Worth a Look 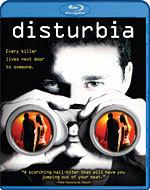 But lo and behold, 'Disturbia' turned out to be a sleeper hit when it hit theaters earlier this year, scaring up over $80 million at the domestic box office alone. Granted, critics weren't kind, but if nothing else the film's success seemed to indicate that today's teens are interested in more than just gore and brutality in their horror flicks, and that -- done in a fresh way -- old-school Hitchcock conventions can still generate great commercial success.

Living under house arrest for three months after numerous juvenile offenses, 17 year-old Kale Brecht (Shia LaBeouf) is stuck passing his days spying on his neighbors. At first it's all fun and games, but things soon take a terrifying turn when Kale becomes convinced that his new neighbor Mr. Turner (David Morse) is a serial killer. Of course, given his track record, Kale can't convince anyone of anything -- not even his long-suffering mother Julie Brecht (Carrie-Anne Moss). He also can't leave his house without triggering the alarm on the bracelet around his ankle. But together with the help of his best friend Ronnie (Aaron Yoo) and the hot new girl in town Ashley (Sarah Roemer), our hero will risk everything to catch his killer.

For what's essentially a low-brow teen horror flick, 'Disturbia' is surprisingly effective. Even more than 'Rear Window,' the film manages to exploit its protagonist's limitations to create some genuine nail-biting tension. Though LaBeouf is no Jimmy Stewart, he is one of the most incredibly likable teen actors around, so as the boy who cried wolf one too many times, we're instantly on his side. Sure, there are enough plot holes in 'Disturbia' to drive a truck through, and sometimes LaBeouf and his pals are so darn stupid I wanted to through my remote at the screen. But still, our hero's predicament remains universal enough to hold the feeble script together -- anyone who's ever been a teenager knows what it's like not to be believed simply because, well, you're a teenager.

Ironically, while its old-fashioned thriller elements are arguably what makes 'Disturbia' work so well for its intended audience, they also tend to make the film a frustrating experience for any viewer over the age of, say, 24 years-old. If you've seen even one Alfred Hitchcock movie, you're likely be able to spot just about every obvious piece of foreshadowing from a mile way. So while the film's twists and turns may have been shocking to the teenagers who flocked to see this one in theaters, for me, they left 'Disturbia' feeling a lot like a director's thesis on what made all those old '50s and '60s thrillers so great.

'Disturbia' is much more successful in its efforts to integrate modern technology into its storyline. Unlike other recent sub-par techno-thrillers like 'Perfect Stranger,' which have instantly felt ten-years-out of date, Caruso and screenwriters Christopher Landon and Carl Ellsworth effectively exploit cell phones, iTunes and videocameras to up the suspense. At first the film may seem to pander to the slavish devotion today's teens feel for their gadgets, but ultimately it uses that reliance to pull the rug out from under its characters. Indeed, ultimately it is the same technology that allows Kale to so easily turn into a peeper that will fail him when it comes time to save his family and friends and to stop the killer. 'Disturbia' may not deep in its social commentary, but at least it possesses enough awareness to skewer its own gimmick.

Of course, none of this is likely to matter to the film's core audience, nor should it. An effectively produced B-movie with a slick surface and hip soundtrack, this one seems sure to continue to resonate with younger audiences at home, just as it did in theaters. But even if you are over the age of 20 and can lower your expectations appropriately, you too may find 'Disturbia' to be a fun fantasy-land of thriller cliches worth visiting. 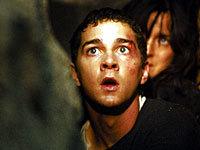 Paramount has been pretty loopy when it comes to their next-gen releases. Although the format-neutral studio has released each of its high-def titles on both Blu-ray and HD DVD, they've tended to use different codecs for each format -- favoring MPEG-2 on their Blu-ray releases, and VC-1 on HD DVD. 'Disturbia' bucks that trend, serving up matching AVC MPEG-4 encodes on both high-def editions.

Presented in the film's original 1.85:1 theatrical aspect ratio, this is certainly a slick-looking presentation, although unfortunately it's far from the best high-def I've seen on a new release.

Aside from an opening prologue that has a very natural, outdoorsy feel, the rest of 'Disturbia' is much more dark, stylized and claustrophobic. As a consequence, the transfer has clearly been tweaked in terms of brightness, contrast and color. Typical of a new release, the source is absolutely immaculate, with not even a hint of natural film grain. Whites are a bit hot, and there appears to be some darkening in the shadows to further boost contrast which dulls detail ever so slightly, but the image is always as sharp as a tack without any intrusive edge enhancement.

Colors are also a bit, well, disturbed. Oddly, blues seem overly enhanced to the detriment of the rest of the palette -- there is little in the way of brighter colors, leaving a slightly ugly brown-yellow tinge to the rest of the proceedings. I also wasn't a fan of the pasty fleshtones, which made everyone look like a digital wax figure.

On the bright side, there is nothing in the way of compression artifacts, and despite all the processing tricks, the image retains a fairly pleasing sense of depth.

Still, overall I'm left feeling a bit disappointed by 'Disturbia.' This Blu-ray presentation (which is identical to its HD DVD counterpart) is certainly not bad, but for a release of a high profile brand new title, it's just not up to the level of true demo material that you would hope for.

In another rarity for Paramount, both this Blu-ray edition of 'Disturbia' and its HD DVD counterpart also get matching sound mixes, with each format receiving a DTS 6.1 Surround-ES Discrete track (both encoded at 1.5mbps) plus an optional Dolby Digital 5.1 Surround EX track (encoded at 640kbps on this Blu-ray, and 1.5mbps on the HD DVD).

Specs aside, this is a very fine mix that's significantly stronger than the video. 'Disturbia' is a very lively, engaging presentation with excellent sound design. The rears are almost always active, from the many shock sound effects, to subtle use of droning ambiance and the frequent smattering of pop/rock songs on the soundtrack. Discrete effects are quite prominent and very well localized, so the sense of envelopment is near-seamless. Dynamics are also first-rate, with some surprisingly heavy low bass and crystal clear high-end. My only complaint is that dialogue is a bit low in the mix, so I frequently felt overwhelmed by the sheer loudness of the sound effects and music. Otherwise, 'Disturbia' scares up some great sonic fireworks. 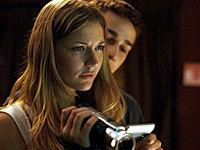 'Disturbia' hits Blu-ray, HD DVD and standard-def DVD simultaneously with a matching suite of extras. Though the content is slick to the point of being vapid, at least the high-def versions present all of the video-based bonus material in full 1080p/MPEG-2 video.

First up is a 14-minute "Making of 'Disturbia'" featurette. Although this is a fairly typical extended commercial, happily it keeps the film clips to a minimum and is loaded with behind-the-scenes footage. By all accounts it was a fun, upbeat shoot.

Next we have a screen-specific audio commentary with director DJ Caruso and stars Shia LaBeouf and Sarah Roemer. This one's definitely a party track, with everyone interrupting and talking over each other in what seems like a race to get in as many anecdotes in as possible. The sheer enthusiasm of LaBeouf and Roemer (who both still seem amazed that they are actually making movies) almost makes you forget that there is little in the way of real insight here -- Caruso never gets much of a chance to dissect his film's story and themes, let alone his approach to the conventions of the thriller genre. Ah, well...

There is also a second "commentary," the "Serial Pursuit" pop-up trivia track. Fairly typical of these types of tracks, this one features a mix of cast bios, one-line production notes, and such fun facts as "a raw steak has no medicinal value for a black eye." There's even a periodic "Skull Counter," which keeps track of an ongoing skull motif that the filmmakers incorporated into the movie's iconography.

Next up is an assemblage of four Deleted Scenes, running six minutes total. All are stand-alone scenes, and add either a bit more exposition or some additional sleuthing from our main characters. There is also a very brief 2 minute collection of Outtakes, but unfortunately this may be the most unfunny gag reel I've ever seen on disc.

Rounding things out is a collection of promotional materials, including a Still Gallery with approximately 50 images (all publicity stills, plus a single shot of the film's theatrical poster), a Music Video for This World Fair's "Don't Make Me Wait," and finally, the film's original Theatrical Trailer.

Although it's full of plot holes and boasts a climax right out of Thrillers 101, it's easy to see why its teen target audience loved 'Disturbia' when it hit theaters earlier this year. Even older viewers in an undemanding mood are likely to find this one a fun Saturday rental -- just set your expectations accordingly.

This Blu-ray release is solid but not exemplary. The audio is quite good, the video transfer is less impressive, and the supplements may be strong in number (and in technical quality), but they're superficial to the point of vapidity.

Sale Price 3.92
Buy Now
3rd Party 3.92
In Stock.
See what people are saying about this story or others
See Comments in Forum
Previous Next
Pre-Orders
Tomorrow's latest releases