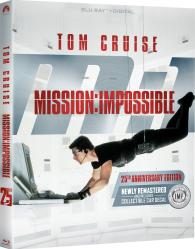 Originally released on May 22, 1996, MISSION: IMPOSSIBLE thrilled audiences with its breathtaking and action-packed story of secret agents and international espionage. Tom Cruise ignites the screen as IMF agent Ethan Hunt, a character that continues to capture the imaginations of fans around the world as the franchise builds toward the highly anticipated seventh installment.

Directed by Brian De Palma (The Untouchables), with a screenplay by David Koepp (Jurassic Park) and Robert Towne (Chinatown), MISSION: IMPOSSIBLE will return to select theaters for a limited run in May through Fathom Events and Paramount Pictures. Details about the theatrical run will be announced in April.