The west is still populated by an often unseen and underappreciated band of roving pioneers - they’re the nomads of Chloe Zhao’s impressive Nomadland. Frances McDormand is a widow whose town disappeared and now she travels from seasonal job to job in her van living the rugged self-reliant life she never dreamed of in this beautiful portrait of the American heartland. Nomadland arrives on Blu-ray from 20th Century Studios with an excellent A/V presentation and a smattering of very brief interesting extras.  Recommended.

The American Dream has always been about working hard and reaping the rewards of your labor. Fern (Frances McDormand) and her husband worked hard and they had a good life in Empire, Nevada. But not long after her husband passed away, the gypsum mine closed effectively killing the town. Now without a place to truly call “home,” Fern lives in her van as a member of a growing population of displaced Americans driving from seasonal job to job to make a living. 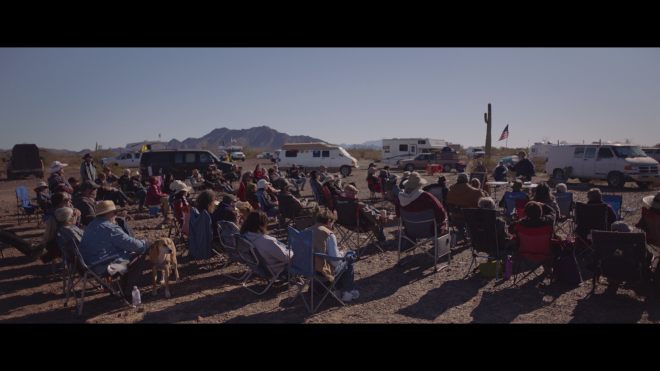 Nomadland is a fierce and poetic piece of work from Writer and Director Chloe Zhao. Frances McDormand with David Strathairn leads the audience through this expansive world of nomadic living. Peppered with colorful characters, there’s a beautiful authenticity to this film. While a fictionalized version of Jessica Bruder’s book, the film has the feel of a travelog documentary where we follow one person and their journey through this strange new world.

These people aren’t homeless, they’re merely “houseless.” Their home is the four wheels and engine that take them from one job to the next. These aren’t glamorous positions and few are well paying, but it’s a living - just not the one often pitched as the pinnacle of the American Dream. But we get to know these people through McDormand’s Fern as they teach her how to survive in this modern American landscape. And while they’re scattered to the four winds, they are a community. It may be years before they see one another, but there’s a hope that somewhere down the road they’ll meet once again.

I find myself having a difficult time describing this movie. It’s a film the provokes a lot of feelings - some of them good, some of them sad. From the outside, this looks to be a hard life that’s not worth living. But if you were to ask people like Fern, it’s the only way to live. Certainly not ideal - but it’s life on their terms. It’s what they have in a world where they may have lost everything else. It's also a life that's taught them a unique survival skillset simply because there might not be anyone around to help.

Through Fern’s odyssey we meet a cast of colorful characters - many of them real-life nomads featured in Jessica Bruder’s book including nomad-guru Bob Wells. Wells has an impressive YouTube channel providing any number of invaluable life hacks for living on the road. These tips aren’t meant for the glamping crowd looking to burn some time after high school or college. His tips are meant for surviving a world few of us will ever experience unless we have no other choice (Seriously check out his YouTube, it’s fascinating stuff).

With these individuals on screen, Nomadland feels anchored in reality and Zhao’s script and direction never lose the heart of these people. Again, this is a hard film to describe. It’s like watching a documentary, but it’s not a documentary. There are real-life people and scenarios, but this isn’t strictly a true story. The lines can be a bit blurry in that regard. To that end, it’s the real people that made this movie interesting. Frances McDormand is a terrific lead once again proving her worth as a headline actress capable of deftly inhabiting a character. She's the star of the film but it's how seamlessly she interacts with the real-life non-actors that makes this such an interesting film to watch. Never once does she feel above the material or as if she were playing down to the level of the real-life people she shares the screen with.

If there’s a fault to be had with the film is that it glosses over certain aspects of the book - namely the hardships of the work these people do and their increasingly older demographics. These are grueling jobs and often pay relatively little for the work/benefit involved - if anything at all. Similar to a scene in the book, a section where Fern is working a campsite hardly pays anything beyond basic room and board with excruciatingly long hours and always being on call. The film really didn't touch how lousy a job that actually was.  It also doesn’t really go into detail about the punishing physical toll it has on the decidedly older and less mobile who make up a large chunk of this transient workforce. It’s a pretty movie, but often it can be too distracted by composing a beautiful shot rather than finding the real raw beauty of the everyday people in the scene.

As the Oscars barrel towards us with Nomadland the front-running favorite, I can see why it’s at the top of the pack, but I wouldn’t go so far as to call it the Best Picture of 2020. I was much more impressed with Sound of Metal. This certainly a very good and affecting film and a worthy contender, but probably not the best of the best. That said, if it won, it wouldn't be like Crash - it would just be the safe pick.

Vital Disc Stats: The Blu-ray
Nomadland arrives on Blu-ray from Disney/20th Century Pictures in a single disc Blu-ray + Digital set. Pressed on a region-free BD-50 disc, the disc is housed in a standard sturdy snapper case and loads to a language selection menu before arriving at an animated main menu with traditional navigation options. 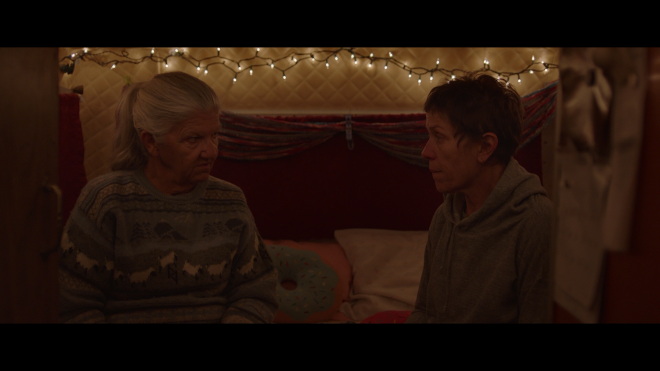 Sourced from a 2K digital intermediate, Nomadland arrives with a splendid 2.39:1 1080p transfer. Shot digitally, the image maintains a crisp well-detailed presence throughout much of the film. This is a movie that loves “magic hour” photography - the splendid moments during sunrise and sunset between full morning and night with beautiful sun-streaked vistas. As I said, this film often feels like a travelogue so it works hard to get great imagery out of each location - even if it’s a vast open desert landscape it looks beautiful. Facial features, clothing, and small details in Fern and the other nomads’ vehicles come through with great clarity. Some scenes shot in the national parks with natural lighting lead to some digital noise where black levels aren’t completely resolved. But those are relatively few moments. Even without a full native 4K DI, I’m bummed this one didn’t get a 4K disc with HDR release. Maybe if it wins Best Picture Disney/20th Century will revisit that decision. 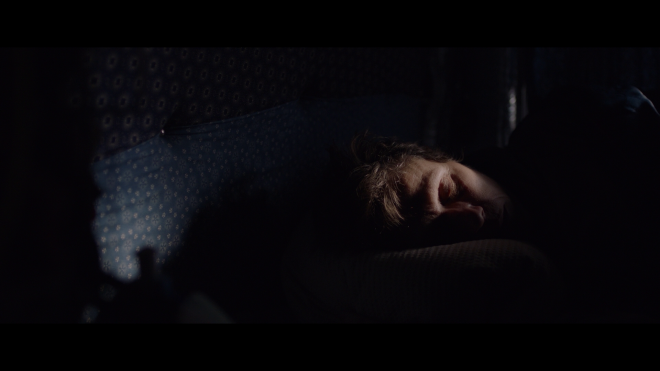 For a film that’s mostly dialogue and ambient sound effects, Nomadland comes packed with a richly immersive DTS-HD MA 5.1 mix. The sounds of wind whipping over the plains, cars traveling through isolated stretches of highway, the sounds of vehicles passing in the night offering up a terrific sense of dimensions and imaging to the mix. Even in the quietest of moments, there’s something to hear with constant subtle but effective channel activity. All around a great audio mix. 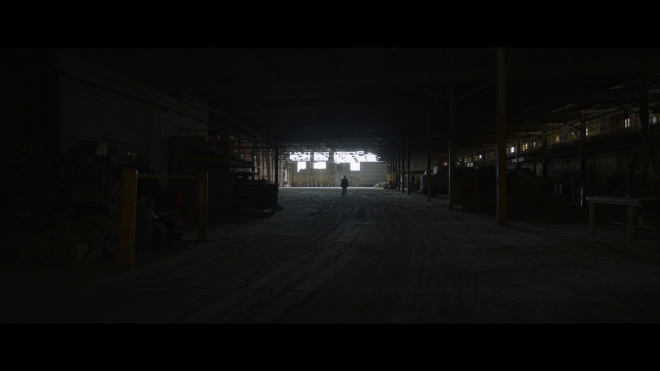 If there’s a letdown with this release, there’s just not a lot going on with this package of bonus features. The Forgotten America mini-doc is pretty good and gives a look behind the scenes of the making of the film, but at less than 14 minutes - it doesn’t cover a lot of ground. The Q&A segment helps fill in those gaps, but again, not a lot. 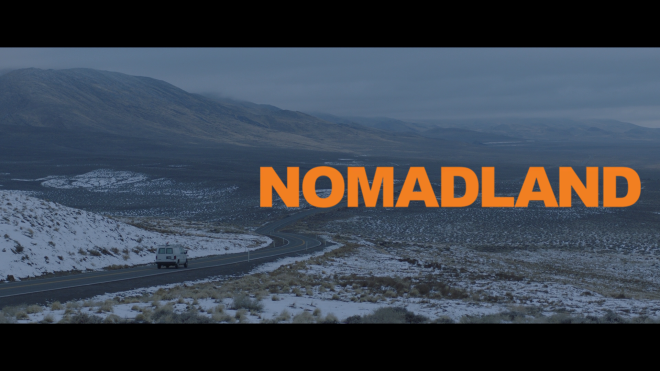 It’s easy to understand why Nomadland is an Oscar frontrunner this season - it’s a hell of a film, beautifully photographed with another terrific performance from Francis McDormand. Whether or not it deserves the accolades is another question. I thought this was a very good impressively well-made film but it took some easy shortcuts with the story and depictions of the lifestyle to fully hit for me. I liked it a lot - but not enough to call it Best Picture of the year.

Disney/20th Century Studios brings Nomadland to 1080p Blu-ray with excellent results. The transfer provides a picturesque image with only a few small quibbles, but the audio mix is excellent. Bonus features are slim pickings but somewhat informative. If you were taken with the film this is an easy purchase. If you’re new to the show, it’s an absolute must-see but it may not be high on the blind buy category. Recommended