Some men are called to greatness to serve in the darkest times of need… others are called to sell weed to get their pal outta jail. Half Baked helped launch Dave Chappelle to comedy superstardom while delivering one of the best stoner comedies of a generation. Kino Lorber Studio Classics brings Half Baked to Blu-ray with a respectable A/V presentation and a great assortment of bonus features. Recommended.

“You can get the stuff at little corner stores called bodegas. Say it with me - BO-DE-GAS. Yes, very good!”

Best friends Thurgood (Dave Chappelle), Scarface (Guillermo Diaz), Brian (Jim Breuer), and Kenny (Harland Williams) have been in a monogamous relationship with marijuana for years. Since they were kids they’ve driven the Green Mercedes Benz. When Kenny goes to jail and the friends need some fast cash - Thurgood discovers an unlimited supply of high-grade medical marijuana at work. If Thrugood’s weed-averse new girlfriend wasn’t enough of a problem, the boys have pissed off the biggest badest dealer in the business (Clarence Williams III - RIP).

Half Baked is the stoner comedy of a generation. At least it was for mine. I was fifteen when this movie hit theaters and became a high-demand rental at the local shops. It became that movie whispered about in the halls of school - “so and so has a copy of Half Baked!” I wasn’t a part of the smoker crowd but I thought this movie was one of the funniest things I’d ever seen. As I got older I worried it would age out once legalization took hold. Thankfully this movie still has some great gags and smart writing keeping it fresh and not just a nostalgia trip.

Written by Chappelle and Neal Brennan and directed by Tamra Davis, Half Baked has a fun come as you are energy. It’s not trying to be more than it is, but it’s also not trying to dumb anything down. Well...at least not any dumber than most of the stuff you do when you actually get high. This is a movie made by people who actually use the stuff, not the ridiculous Reefer Madness nonsense so many still subscribe to. It recognizes the ridiculousness of getting high without over glamorizing it. 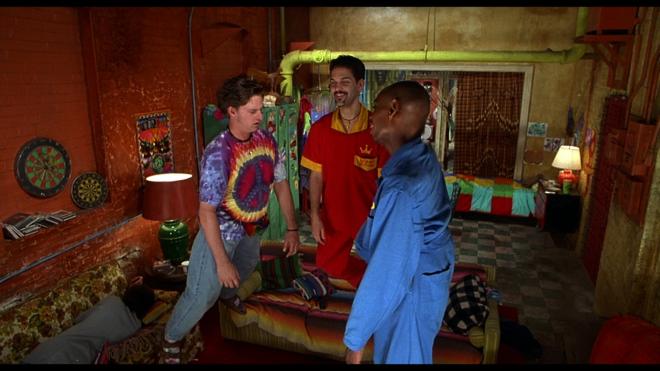 For a pretty basic stoner comedy, it’s the cast that sells this movie. At the top of the pack is Dave Chappelle as the lovable master of the custodial arts. It’s his show but he also gives room for his compatriots to shine. Guillermo Diaz brings wild energy to Scarface - I still crack up at his introduction yelling at a coworker at a burger joint. Jim Breuer is well basically Jim Breuer but funny - not SNL Goat Boy. Harland Williams has some of the funniest bits of the film, but sadly we don’t get a lot of time with him and the rest of the guys. Then we get Clarence Williams III as the villain dealer Samson Simpson in another brief but memorable visit with the late great actor. Toss in cameos with Steven Wright, Tommy Chong, Jon Stewart, Snoop Dog, and Stephen Baldwin in his best performance to round out the colorful cast of characters and you have an entertaining show.

Half Baked may not be the greatest comedy ever made. It’s pretty basic and to the point and absurdly stupid at times - but it’s the good kind of absurdly stupid. At an astonishingly brisk 82-minutes, the film sets itself up and moves along at a great clip without ever bogging down. From one ridiculous setup to the next it builds the comedy and keeps you laughing. Tamra Davis directs with ease letting the cast do their thing. You can feel where there was a loose script with plenty of room for the cast to run in their own direction. It’d been a few years since I last fired up Half Baked and I was very happy to see this didn’t lose its potency. It may be a bit of a nostalgic dip, but it’s still damn funny.

Vital Disc Stats: The Blu-ray
Half Baked finally blazes a path to Blu-ray thanks to Kino Lorber Studio Classics. Pressed on a Region A BD-50 disc, the disc is housed in a standard keepcase. The disc loads to a static image main menu with traditional navigation options. 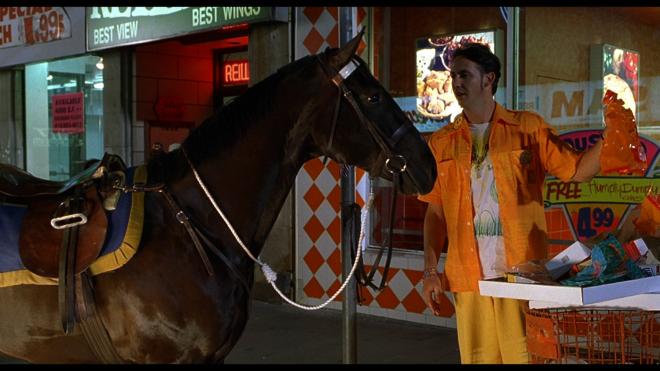 Similar to CB4, Half Baked didn’t get to roll a fresh new transfer before running out onto Blu-ray. I never had the HD-DVD disc, but I’m sure what we have is pretty much the same transfer that’s been hanging around the last few years. While details are appreciable, they don’t really pop to life except in closeups and some middle shots. Film grain is apparent but unresolved indicative of an older less refined scan. In keeping with a Universal catalog title, there’s still some notable edge enhancement leading to some artifacting.

In the plus column, colors are bold with beautiful primaries and healthy skin tones. Black levels are also pretty good, a little gray in places, but there’s an appreciable amount of image depth. Aside from the speckling around the opening credits, the elements sourced for this master are in pretty great shape without any notable issues of damage or other anomalies. Not a terrible transfer by any means, it’s still pretty good, but for a fan favorite, a little more TLC with the THC would have been welcome. 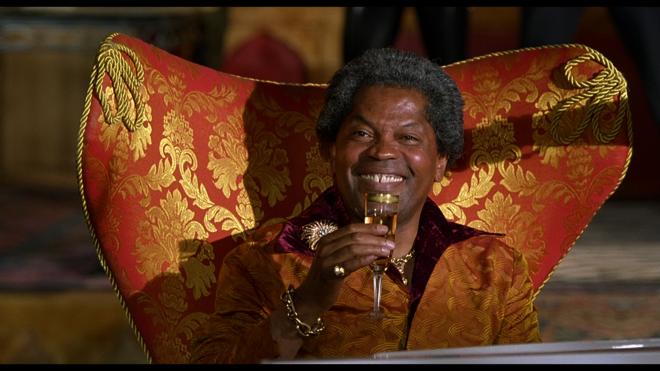 While the image presentation may be a bit on the “good enough” side of the spectrum, the DTS-HD MA 5.1 and DTS-HD MA 2.0 audio tracks are spot on. This isn’t a movie that commands the most active and immersive of surround experiences but I was pleasantly surprised by the 5.1 mix here. Much of the film is front/center focused with little deviations for surround activity to set the stage. A few sequences - when Thurgood and the gang first try the medical-grade weed or Chappelle’s Sir Smoke-a-lot videos score some welcome surround kicks. To that end the 2.0 mix is much more frontloaded - but still a very nice track. The 5.1 mix may space things out a bit more offer a little more balance between scoring, ambients, and dialog, but both tracks get the job done nicely. 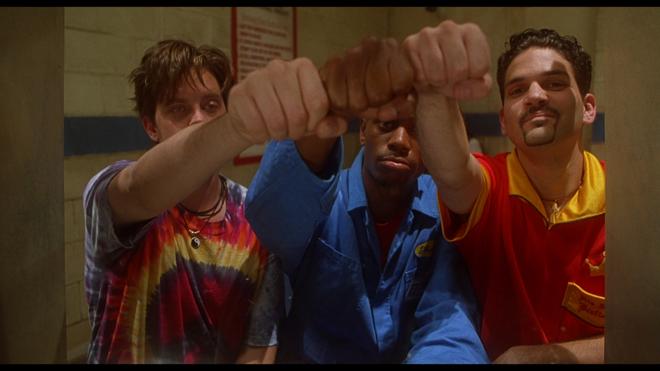 Nothing new in the stew here - but all of the past bonus features are ported over here. The Tamra Davis audio commentary is worth the listen and the deleted scenes and alternate ending are interesting, but after that, everything is that weird sort of packed-in irrelevant bonus material that was so common back in the heyday of DVD bonus features.

Half Baked may not be the greatest stoner comedy of all time, but it’s still a damn funny flick. After so many years away from this film’s theatrical release with national legalization a looming reality, it thankfully hasn’t aged out. It may be funnier for folks of a certain generation but it still rolls some great laughs. Kino Lorber Studio Classics brings Half Baked to Blu-ray with a decent 1080p transfer but the dated source holds it back. Thankfully the audio is all-around solid material. Bonus features are all repeats. If you’re feeling like blazing the old days Half Baked is worth revisiting - or introducing to a new generation! Recommended.