The plot of an enormous ape-like monster infatuated with a fair-skinned, blonde woman has always been riddled with some problematic racial and sexual undertones, and perhaps, no version of the fantasy adventure tale makes it as blatant and tangible as John Guillermin's King Kong. One scene, in particular, immediately comes to mind in this Dino De Laurentiis-produced remake of the 1933 classic, and that is the lengthy encounter with the native people of Kong's unnamed island. The entire encounter, especially when the tribe leader bargains for Jessica Lange's hyper-sexualized Dwan, feels so ridiculously dated and insensitive that it comes off more comical and laughable than anything else. Ironically, this is also the production's most deliciously entertaining aspect, the sort we might argue to categorize the movie as a "so bad, it's good" variety.

Making it all the more problematic is that filmmakers' evidently made an attempt at updating the original script for contemporary moviegoers, starting with Jeff Bridges's Jack Prescott as the 1970s sensitive man with his long, hippy hair essentially portraying a modern knight in shining armor to Lange's stereotypical damsel in distress. The biggest change in the story comes by way of Charles Grodin's oil tycoon Fred Wilson serving as the plot's central motive for Kong's unfortunate demise, and the character of a selfish, money-grubbing company executive was clearly inspired by the oil crisis from just a few years earlier. And once again, Wilson is ultimately more comical than serious baddy. Adding to the unintentional hilarity is arguably the special visual effects, which admittedly, were state-of-the-art for the period, but plainly seeing a man in a suit comes undeniably with some small degree of silliness, which I still remember being aware of when watching the movie on TV as a kid. 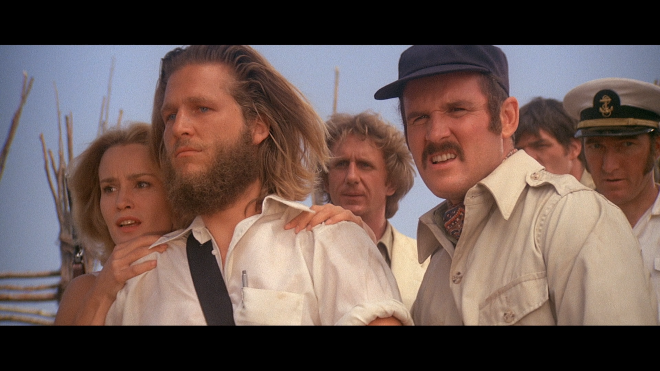 For a more in-depth take on the film, check out Peter Bracke's review of the 2007 HD DVD HERE.

Shout! Factory unleashes King Kong (1976) to Blu-ray as a two-disc Collector's Edition. A pair of Region A locked, BD50 discs are housed inside the normal blue case on opposing panels with brand new reversible cover art and a cardboard slipcover. The first disc contains the original 134-min theatrical version while the second features a 182-min television cut, which was pieced together from footage that was reportedly made from a 2K scan of the best available elements. At startup, both discs go to a screen with full-motion clips and the usual menu options along the bottom while music plays in the background.

Kong breaks free once more in high-def thanks to this great-looking AVC-encoded video, showing better than expected definition and resolution throughout. Naturally, the dated special effects tend to stand out, but that's frankly to be expected from a blockbuster of this age and caliber. Overlooking those moments, however, the HD presentation reveals strong, sharp details in the clothing, hair and in much of the stage design, showing that the elements remain in great condition after all these years.

Presented in its original 2.35:1 aspect ratio, the video also arrives with strong contrast balance, displaying vividly crisp whites and allowing for outstanding visibility in the distance, exposing the smallest cracks and crevices in the rock formations. Brightness levels waver a tad and can have a slightly dark grayish tone in some spots, occasionally making the image somewhat flat in few areas, such as the nighttime sequences on the island. But overall, blacks are rich and, for the most part, accurately rendered with good, strong shadow delineation. Best of all is a well-saturated and vivid color palette, showering the action in often striking, full-bodied primaries while secondary hues add a welcomed pop and warmth, and facial complexions appear healthy and accurate with revealing, lifelike textures. (Video Rating: 74/100)

As is customary, Scream Factory equips another cult favorite with a pair of DTS-HD Master Audio soundtracks, both of which sound great in their own right. The first choice is the 5.1 surround sound version, which is also the automatic default. The second is a 2.0 stereo option that when coupled with the receivers' Dolby Surround or DTS: Neural:X up-mixing functionality, is just as good if not better than the default, which in truth, will be a matter of personal preference for each listener.

In either case, the two tracks display a notably well-balanced and decently extensive mid-range, maintaining some first-rate clarity and definition for a majority of the action. However, the design doesn't particularly push hard into the upper frequencies, making most sequences feel somewhat shallow and uniform, such as Kong's loud roars or the climactic finish atop the World Trade Center. Nevertheless, various background activity convincingly bounces between the fronts, generating an engaging and surprisingly broad soundstage with a satisfying sense of presence. On the whole, the surrounds are on the quieter side, but from time to time, a few atmospherics bleed into the sides and subtly enhance the soundfield with the scenes of Kong on the island being some of the best moments. The low-end never standouts in another memorable way, but it's capable and adequate for a film of this vintage. With strong, very well-prioritized dialogue, both lossless mixes are a great complement to The Eighth Wonder of the World. (Audio Rating: 78/100)

It really can't be denied that John Guillermin's King Kong is a pretty bad remake of the beloved 1933 classic with some problematic undertones. However, whatever underlying issues writhing beneath the surface, the Dino De Laurentiis-produced blockbuster is also a cheesetastic, laughably diverting production that still manages to entertain after forty-five years. Scream Factory unleashes the cult favorite as a two-disc Collector's Edition with a strong HD video presentation and an excellent pair of DTS-HD MA soundtracks that are sure to satisfy fans. With a healthy assortment of new bonus material to boot, the overall package is recommended.