Explorers debuts Ethan Hawke and River Phoenix to the world as two friends build a spaceship out of a carnival ride and fly it into space, hoping to make contact with alien life. It's still a wonderful film from Joe Dante that oozes the best and most creative side of Spielberg and Amblin Entertainment. Luckily, Shout Select has given this film a new 1080p HD transfer with both the theatrical and home-video cuts of the movie with a brand new 5.1 DTS-HD audio mix. there are some excellent new bonus features as well. MUST-OWN! 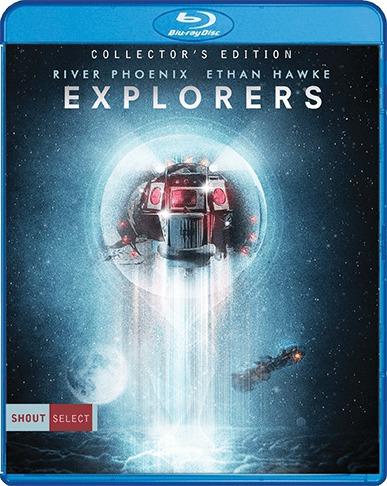 Most kids dream or talk about going into space and seeking out other life and befriending aliens at some point in their young lives. They build makeshift spaceships out of cardboard boxes, turn out the lights, and presented to be in the vast expanse of space. Director Joe Dante (Gremlins) took this childhood notion and brought it to the next level in his film Explorers that followed three school friends who build a spaceship and actually fly it to outer space and meet intelligent life. Its light-hearted feel mixed with some real-life drama and thrills makes this nostalgic movie still stand the test of time with its Spielberg elements.

Joe Dante's Explorers brings Ethan Hawke and River Phoenix to the big screen for their first time as best friends Ben and Wolfgang respectively. Wolfgang is a nerdy stereotype who would rather skip school to work on his experiments at home where Ben is obsessed with science fiction and outer space comics and television. Ben has some vivid dreams where he illustrates what he saw during his sleep, where Wolfgang draws up those images on his Apple II computer that creates a bubble that can move from one location to the next and make into a larger bubble.

After Wolfgang and Ben are bullied at school, a classmate named Darren helps them and becomes their third amigo as they realize they can fly in this bubble everywhere. Together they set out to find an old carnival tilt-a-whirl ride at a junkyard and build a spacecraft to explore outer space or at least their local drive-in movie theater. Soon enough, these three start having the same dream where they figure out that some life force from outer space is calling them to come to visit, which leads them to discover life outside of Earth.

Explorers feels a little like E.T. in parts, but has something different to say, but that Amblin form of entertainment is smack dab in the center of the story where kids are the focal point of some fairly adult situations. There's adventure, thrills, drama, and comedy throughout, much like most Spielberg films that deal with kids. With Explorers though, the kids come from all different backgrounds and are inspired by their own fascinations with science that sets this film apart from its contemporaries.

The third act is a bit different than one might expect from this type of film, however, it's highly intelligent for how it executed a first-time meeting with humans and alien life in this certain style of storytelling. It was ahead of its time and could have gone a more violent or sinister direction, but instead, Little Richard makes a big appearance in the form of an iconic song.

Jerry Goldsmith's score is inspiring and grand that accentuates every motive and action in the film with a sense of wonder and amazement as these kids build their spaceship and take their first flight. And it's easy to see the pure genius in the young River and Ethan who even displayed extraordinary acting performances at their young age. Explorers is still one of the finest and most fun movies from the '80s with amazing storytelling and wonderful characters brilliantly executed with Dante's keen eye for storytelling.

Vital Disc Stats: The Blu-ray
Explorers makes contact to Blu-ray courtesy of Shout Select with a two Blu-ray Disc set. One disc features the theatrical cut while the other has the home-video cut, which is more common back in the '80s.  The two discs are housed in a hard, blue plastic case with a cardboard sleeve, featuring new artwork from the film. There is no digital copy included. 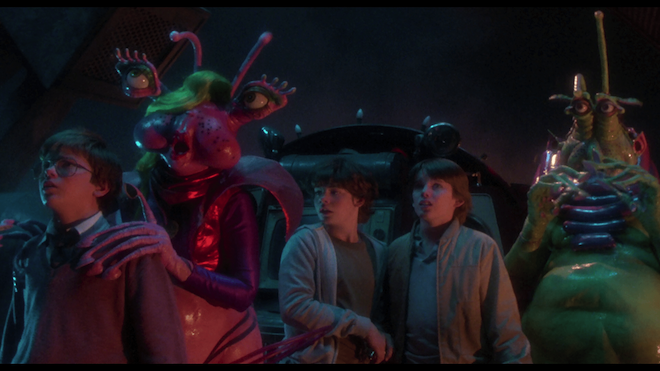 Shout Select brings Explorers home to Blu-ray with two brand new 1080p HD transfers in an aspect ratio of 1.85:1. One disc contains the theatrical cut and the second disc contains the home video cut. Both versions look excellent, however, the home video version has a slightly better image since the theatrical cut had more issues and hadn't been looked at in quite some time.

Both cuts of the film now have a much better color palette that feels natural and organic. The use of blues throughout the film, including the dream sequences and scenes at night time evokes some amazing shades of blue from lighting and of course the tilt-a-whirl cart. The light blue bubble that allows the kids to fly into space also looks richer here. The color of red makes a lasting impression on Thunder Road, along with the use of darker reds and purples inside the alien spacecraft. when in natural settings outside or in Wolfgang's house, earthier tones are present with greens, browns, and yellows that all look sharp. Black levels in the void of space and inside the dark corridors of the alien spacecraft are now deep and inky without any murky inconsistencies. Skin tones are also natural too.

The detail is upgraded in both versions too, which reveals textures in the corduroy pants, the leathery skin of the aliens, and the metallic look of the carnival ride. Closeups reveal acne, facial makeup, pores, and individual hairs. Wider shots also look bolder without any softness with the exception of a couple of quick shots. The difference between the two cuts comes with the theatrical version still have some speckling, dirt, and debris attached to it, but other than those small instances, both pictures look phenomenal and the best they've both looked possibly ever. This is a high upgrade from the past DVD version of the film from more than fifteen years ago. 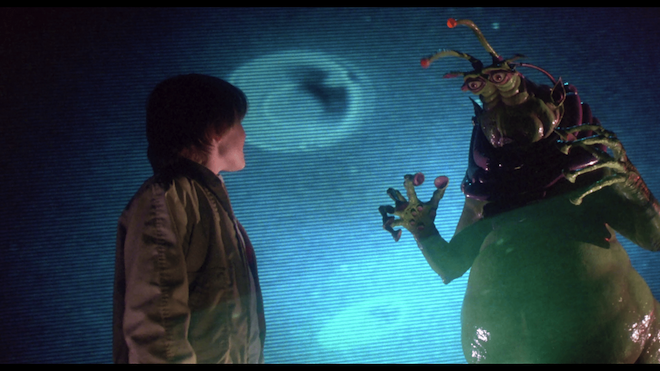 This release comes with a DTS-HD MA 2.0 stereo option and a brand new and amazing lossless DTS-HD MA 5.1 mix. Both sound great, but the 5.1 option is the definitive way to go. Sound effects of the little blue bubble flying around Wolfgang's lab, destroying objects and houses across the street, and eventually bursting sound incredible here. The object flys seamlessly throughout the speakers with smooth transitions. The odd and spooky sounds from the alien spacecraft also bring a ton of atmosphere to the soundscape that is fully immersive.

The low end kicks in with some rumbling bass when the tilt-a-whirl loses air compression and falls back down to the ground, as well as the mechanical spider sequence and the comical musical number in the film. The iconic and impressive score from Jerry Goldsmith always adds that Spielbergian element to the film with a full orchestra telling a story on its own. The dialogue is clean and clear, free of any audio issues. 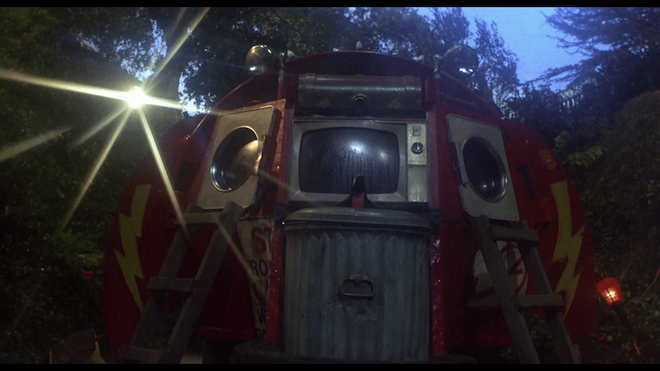 There are about two hours of bonus material here, all of which are worth watching. The new fully produced interviews and the tons of deleted scenes are well worth the price of admission. The theatrical cut of the film runs only three minutes longer than the home-video cut and adds some bullying of Wolfgang at school and a longer sequence of the boys rolling the carnival ride back home. 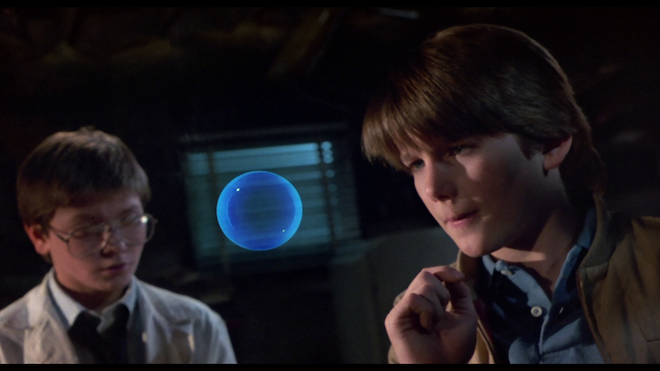 Explorers is still one of the most nostalgic and great films of the '80s. It has a large Spielberg quality to it and inspires everyone to follow their dreams. Plus it's great to see a young Ethan Hawke and River Phoenix act in their first roles on screen. This Shout Select Blu-ray knocks it out of the park in terms of video, audio, and bonus features, all of which are worth watching and exploring. If you're a fan this truly special edition of Explorers is a Must-Own!