Fred MacMurray and Dorothy Malone headline the Western/Thriller Quantez from Director Harry Keller. A slow-burn potboiler, the film could almost be a horror picture as a team of bank robbers running for the border stop in a town expecting new horses only to discover it abandoned. It starts strong but stumbles in the home stretch succumbing to convention and cliche. Kino Lorber Studio Classics delivers this entertaining flick to Blu-ray with a serviceable A/V presentation and a nice audio commentary to round out the bonus features. Worth A Look

It was a simple easy bank robbery for Heller (John Larch) and his gang of robbers Gentry (Fred MacMurray), Teach (John Gavin), Gato (Sydney Chaplin), and Heller’s squeeze Chaney (Dorothy Malone). After successfully ducking the posse, they hightail for the town of Quantez for fresh mounts before crossing the desert into Mexico. But the town was suddenly abandoned without any sign of the people. Now forced to stop or risk killing their rides, the band will let jealousy and betrayal tear itself from the inside - unaware of the danger that lurks in the shadows outside. 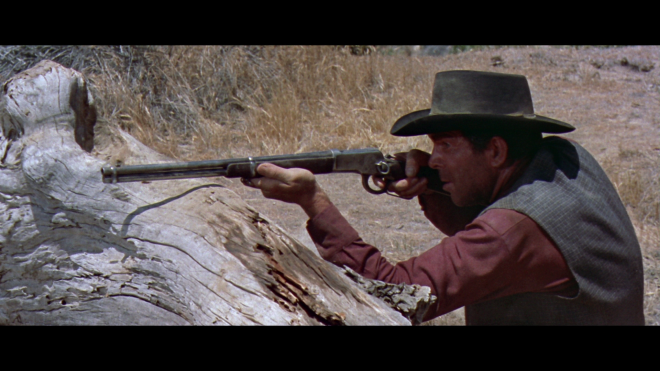 As a fan of the genre, I’m always ready to give just about any Western a shot. Cheap B-movie? If it’s as entertaining as Roger Corman’s The Gunslinger, I’m game. By the time Quantez was in production, Universal International was hip-deep in churn and burn genre fare. Made on the cheap for fast turnaround recycling sets, crew, stars, and the same library of music at will, you don’t ever want to set expectations too high for a Universal International picture. There are notable leading stars filling out their contracts while up and coming actors get a shot to establish themselves. Some are solid films worth the time, others are barely entertaining enough on their own they were choked into double billings with better movies. Every now and again you'd get a pleasant surprise.

Such is the case of Quantez. Had this been a major release from Universal, a little more time and effort probably would have been paid to the script. The film starts out strong with our gang of robbers on the run. Already John Larch’s Heller establishes himself as the hothead leader without care for the wellbeing of his gang and getting hot under the collar when his nonsensical decisions are questioned. Fred MacMurray slips in as the level-headed gunslinger who brings reason to the situation. When the gang arrives in Quantez, the suspense steadily builds from there.

It’s here where if the filmmakers showed a little more creativity, we could have a terrific horror/western genre mashup. As the gang investigates they find a town abandoned on the quick leaving behind valuable supplies and a tantalizing mystery. While Heller thinks they found some luck, Gentry feels in his gut something is dead wrong. It’s the answer to that hunch that pulls the movie back into rote genre cliche. If you’ve seen any Western of the ‘40s and ‘50s, then the answer to the mystery is an easy guess. Then the film’s climax is another cliche checked off the list.

As I watched, I couldn’t help but feel like this would have made an excellent horror film. Start out as a tried and true Western, but then introduce an elemental evil and let the film’s suspense spiral out from there. If not a horror film, then ape a Gangster classic like Petrified Forest. At one point a new character is introduced and I thought for sure that’s where the film was going to go - but sadly they stuck to convention and didn’t let creativity flourish beyond the initial setup.

While elements of this film are a letdown, the middle section where Heller, Gentry, Teach and Gato slowly pick away at each other is prime Grade-A USDA Certified Western meat. With a satchel full of cash, paranoia sets in and trust quickly frays. The biggest strength of this film is watching John Larch and Fred MacMurray spar over Dorathy Malone’s Chaney or how John Gavin’s Teach is an unproven gunman who can still hold his own. As Sydney Chaplin’s Gato becomes more of a mystery character, the tension rises and the film finds an excellent pace. It’s a high-tension entertaining thriller - but those compounding cliches hold Quantez from being an excellent underappreciated entry in the genre.

Fred MacMurray, John Larch, and Dorathy Malone hold the show together and are the reasons this film still works. With lesser actors in their places, the film wouldn’t have found its legs. In the canon of Westerns, Quantez is ultimately an above-average entry. While I’m less impressed with how the film resolves itself, at 81-minutes it moves fast and works lean doing a lot with very little. Again, if Universal had made this an A-level picture, Quantez had the potential for a genuine classic instead of simply becoming serviceable worthwhile entertainment.

Vital Disc Stats: The Blu-ray
Quantez arrives on Blu-ray thanks to Kino Lorber Studio Classics. Pressed on a Region A locked BD-25 disc, the disc is housed in a standard sturdy keepcase and loads to a static image main menu with traditional navigation options. 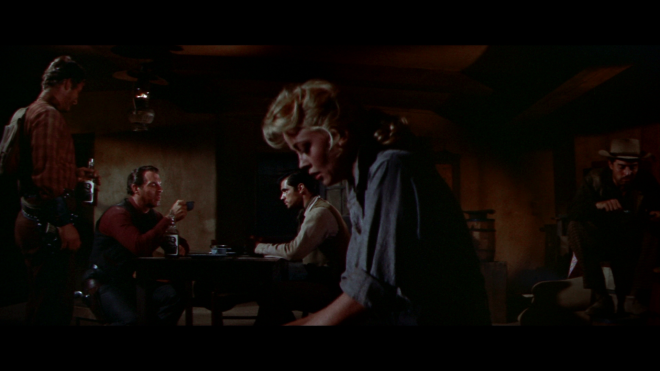 Quantez arrives with a respectable 2.35:1 1080p transfer. This appears to be a dated master - but not the worse for wear of many Universal back catalog titles. Softness is the primary issue as fine details just don’t pop through much of the film. Well-lit sequences like during the opening and the climax look great - it’s the darker night scenes of the middle stretch are a bit spotty. Elements are in decent shape, the worst of the wear and tear is some mild speckling, but nothing serious. Black levels are a bit up and down, some scenes are genuinely rich with a great sense of depth. A few sequences get precariously close to crushing out with a notable flatness to the image. I thought that would be because of optical scene transitions, but it lasts for longer stretches than the necessary frames for the effect. For a low-tier film, this isn’t bad at all, but without a fresh restoration, this isn’t a pristine piece either. 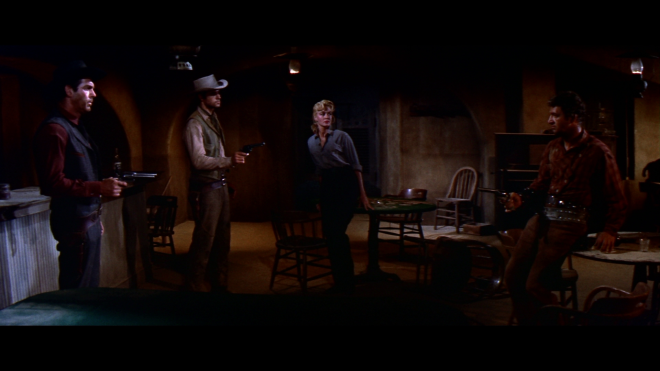 Quantez arrives with a solid DTS-HD MA 2.0 mono track. Since much of this film takes place inside one location, dialogue and only a smattering of incidental sound effects take point. Much of the film is quiet and conversational letting the characters sell the story. The climax opens things up with galloping horses and gunfire, but this is still a restrained effort. The canned score is nice and crisp and adds to the show punching up the suspense nicely. Levels are spot on without any need for monitoring. 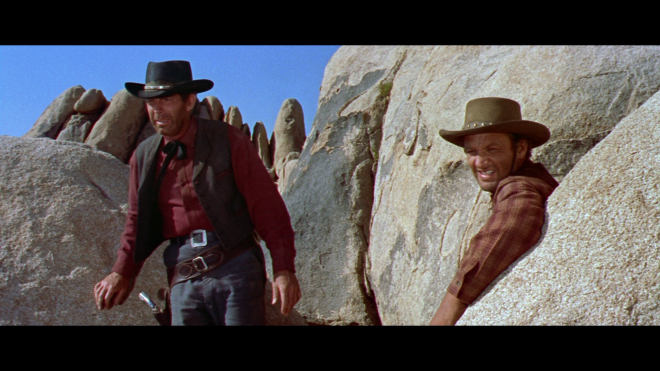 Bonus features for Quantez aren’t the most plentiful lot, but the audio commentary from Film Historian Toby Roan is a nice listen. It’s largely anecdotal than a scene-specific piece, a lot of the time he sounds like he’s reciting a dissertation, but there’s some useful info about the production in there. After that, it’s the usual bundle of KLSC trailers.

Quantez may not be the best or greatest western ever made - but it’s 81-minutes of worthwhile entertainment. It moves fast and works lean and leaves a memorable impression even if it takes the easy way out with tried and true genre cliches. Fred MacMurray, John Larch, and Dorathy Malone are the main draws here and they don’t disappoint. Ultimately I had fun, but it had room for improvement.

Kino Lorber Studio Classics delivers a solid Blu-ray release for this 1957 feature. The image transfer may be dated but it works well for the film and the audio is on point. Bonus features may not be robust, but I appreciate that KLSC finds film historians like Toby Roan to contribute an interesting audio commentary. Quantez at the very least is well Worth A Look.