Chris Rock and Phil Hartman take a stab at satirizing Gangsgter Rap with the uneven but damned funny CB4 The Movie. Directed by Tamra Davis and costarring Chris Elliott, Allen Payne, Deezer D, and Charlie Murphy, the film runs a few pages from the This is Spinal Tap playbook but charts its own course in this sendup of rap, fame, the music industry, and moral grandstanding. Kino Lorber Studio Classics brings CB4 to Blu-ray with a decent A/V presentation and a nice selection of bonus features. Worth A Look

They’re at the top of the charts setting sales records even The Beatles couldn’t match. On their own, they’re MC Gusto (Chris Rock), Dead Mike (Allen Payne), and Stab Master Arson (Deezer D). Together they’re CB4 the biggest badest gangsta rap group to come out of the upper-middle class respectable LA neighborhood of Locash. But to reach their fame they stepped on the toes of the worst rapper in town (Charlie Murphy) and he’s out for blood.

In 1993 the likes of Ice T, Run DMC, and NWA had been around the block and back charting massive success. Hip Hop was mainstream. The Fresh Prince was on must-see TV. Ice T was a couple of years away from starring in Tank Girl and Ice Cube proved himself as an actor with range in Boyz n the Hood. The genre was ready for a sendup and Saturday Night Live alum Chris Rock was ready to deliver. Directed by Tamra Davis and written by Chris Rock with Nelson George and Robert LoCash - CB4 is an uneven but still effective musical satire.

The film opens with Chris Elliot playing a very pasty white in-over-his-head documentarian trying to capture the essence of the mega-group that is CB4. This has all the hallmarks of a This Is Spinal Tap style show allowing for actual rappers and personalities like Ice Cube, Ice T, Shaq, and Halle Berry among others to talk about the fictional group with reverence. A mocumentary approach could have worked well for this movie if they kept to it. It then switches gears into a flashback film with Chris Rock’s MC Gusto detailing the origin of the group. While there is a lot of funny material here, it’s very uneven. You can feel this group of comedians and musicians throwing a lot of cinematic spaghetti at the walls hoping something sticks. 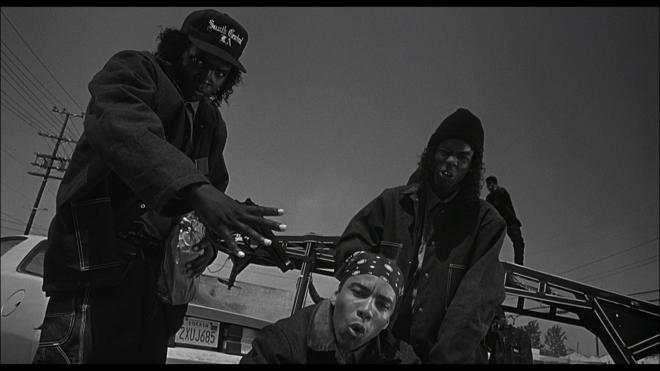 One thing that does stick is Phil Hartman as the uber-republican Virgil Robinson channeling his inner Pat Buchanan. Up for reelection, he needs a platform - and what’s better than the moral assault on the children that is rap music? It’s been some years since I last saw this movie but I was instantly pulled back into my youth where this was a regular issue in white suburbia where I grew up. Kids were sent home or even outright suspended from school for wearing NWA shirts - or even DJ Jazzy Jeff and the Fresh Prince accouterments. It didn’t matter how wholesome - Rap Was Bad. Except for that talented Vanilla Ice boy… somehow that nonsense was okay? When Phil Hartman runs his first press conference, it’s classic material from the late comedian. It may have been absurd when he did the gag, but it’s creepily real today.

Another bit that works is the movie’s theme of “fake” hard musicians. CB4 has become a verb to describe a fake personality - someone who is edgy and “real” in their albums but is anything but in real life. Watching this film you can see how this gag plays out and goofs on any number of acts past and present. If there’s a legacy this film leaves in its wake is this smart parody of performance acts.

While this movie may be uneven at times, it mostly works. As the second feature film from Tamra Davis, she has a keen eye for letting the talent work and do their thing. Her later efforts Billy Madison and Half Baked are proof enough she knows how to work with comedians in character and just let them role. Chris Rock is in his prime here loading up his Albert/MC Gusto character with enough material to always have a solid laugh - including a reenactment of his crack smoking scene from New Jack City. That scene was once tragic - now it’s a gut buster!

I’ve heard this movie had a lot of cut material and if that’s true I imagine it’d account for the unevenness where plot lines and characters randomly come and go. This feels like a movie that probably ran a solid 15-20 minutes longer but needed to be trimmed to fit that 90-minute standard comedy runtime. It’s not the classic that it could have been if it’d picked a framework and stuck with it, but CB4 is a fun movie. I’d forgotten a lot of the gags and they had me laughing like they were fresh and new all over again. If this one passed you by, give it a whirl. It'd make a fun double feature with Straight Outta Compton!

Vital Disc Stats: The Blu-ray
CB4 arrives on Blu-ray courtesy of Kino Lorber Studio Classics. The film is pressed on a Region A BD-25 disc. Housed in a standard keepcase, the disc loads to a static image main menu with traditional navigation options. 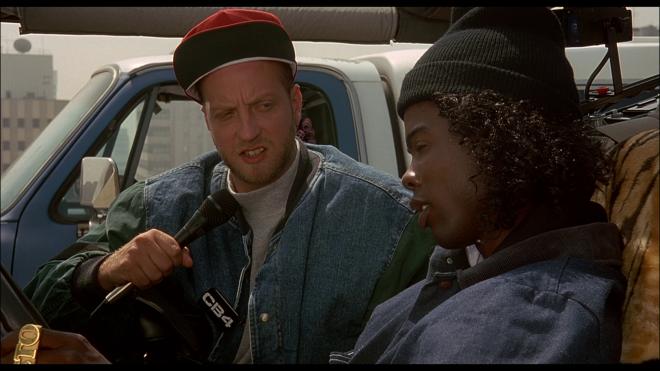 Making its first appearance on Blu-ray, CB4 hits with a decent 1080p 1.85:1 transfer. This presentation has all of the earmarks of a broadcast HD master that hasn’t seen any TLC or attention in a number of years. Details are sharp enough allowing you to appreciate facial features, costumes, and production design - but it doesn’t come to life with the same vigor of a more recent scan and restoration. Colors are bold with plenty of primary presence and natural tones. Black levels are decent but the image has a flatness to it that’s unavoidable. Slight edge enhancement has also been employed giving edges a crunchy texture. Some speckling remains and a little frame wobble is present early on but stabilizes once the credits are done. Not a terrible transfer by any means, but far from a top-tier effort of a catalog title. 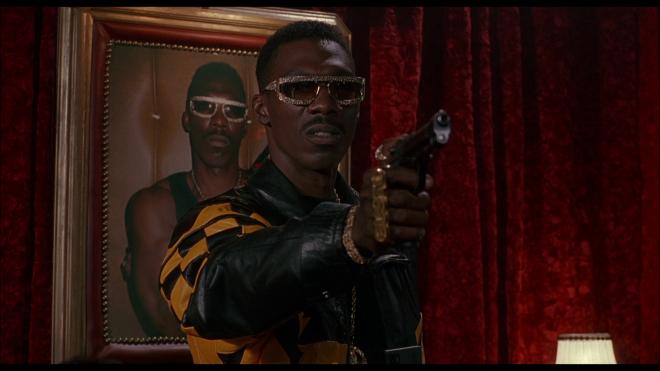 As with the video, the DTS-HD MA 2.0 isn’t a showstopper. Content with getting the job done, the dialog is clear - music performances get the necessary attention, but this is also a pretty flat mix at times. There just isn't a lot of atmosphere to the track. An early scene in a call center is the best of that where ringing phones and voices move about. But a scene shortly after at a diner doesn't feature that same level of immersive care. Levels are a bit off as I felt that I had to punch the volume higher than normal as well. Not a terrible track, it does its job - but it doesn't go above and beyond. 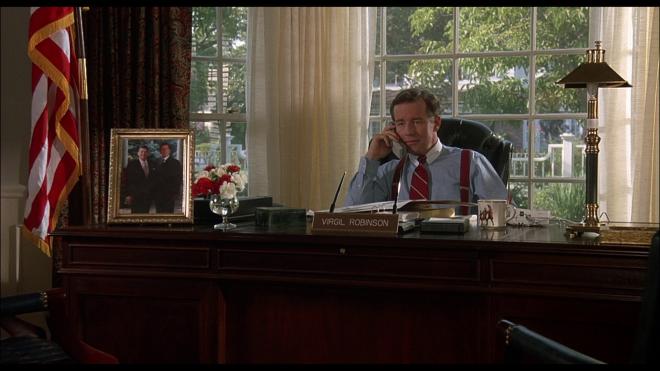 This release of CB4 arrives with a nice selection of bonus features. The audio commentary is an interesting listen but my highlight was the interview with co-writer Nelson George who talks about how the film came together, shooting in LA after the riots, and brings up some of the dropped storylines that didn’t make it through the audience testing process.

CB4 may not be the greatest 90s comedy - but it’s still damn funny. It had a sharp eye for satire with a clear target. It’s a little rough around the edges, chunks don’t completely work, but there’s a lot of hilarious material here - more than enough to make up for some dud jokes.
Kino Lorber Studio Classics brings CB4 to Blu-ray with a decent enough A/V presentation, but some restorative TLC from Universal’s team would have helped. There aren’t a ton of bonus features but what we’re getting is worth picking through. Worth A Look