Doris Day and Gordon MacRae team up for this tuneful walk down memory lane that bears more than a striking resemblance to Meet Me in St. Louis. Though On Moonlight Bay will never eclipse its predecessor, the nostalgic tunes, heartwarming story, bits of human comedy, and enduring appeal of the top-notch cast make director Roy Del Ruth's period musical a homespun delight. A brand new 4K master from the original Technicolor negatives yields another glorious Warner Archive transfer that's complemented by solid audio and a trio of vintage supplements. If you're a fan of the spritely Miss Doris, this sunny musical will certainly brighten your Day. Recommended.

What if the Smith family really did move away at the end of Meet Me in St. Louis? Not to New York City, but to an affluent neighborhood in a small Indiana town. Well, those lovable Smiths just might morph into the equally endearing Winfield family, jump ahead in time to 1917, and star in the nostalgic and tuneful On Moonlight Bay. Director Roy Del Ruth's winsome slice of Americana bears more than a passing resemblance to the classic 1944 MGM musical (in an ironic bit of casting, Leon Ames plays the father in both films!), but a breezy script, bevy of old-time songs, and the sunny disposition of the always adorable Doris Day help it (almost) withstand the inevitable comparisons.

As the film opens, the average American Winfields - father George (Ames), mother Alice (Rosemary DeCamp),  daughter Marjorie (Day), and son Wesley (Billy Gray) - have just moved across town along with their loyal cook Stella (Mary Wickes) into a bigger house in a ritzier neighborhood. Like the TV-sitcom Jeffersons of the 1970s, they're "movin' on up," but the sudden changes prompt a rocky period of adjustment. Teenage tomboy Marjorie tries to fit in by crashing a pick-up baseball game in the park, while wild, 11-year-old Wesley, a mischievous dreamer, gets into trouble with a sullen neighbor boy. That encounter leads Marjorie to meet and begin dating the boy's brother, Bill Sherman (Gordon MacRae), a headstrong, rebellious college student with a bunch of progressive ideas that don't sit well with the conservative and protective George.

As time passes, Marjorie and Bill grow closer and weather the usual innocuous romantic misunderstandings. They also confront such domestic and global obstacles as George's opposition to their engagement and America's involvement in World War I. Meanwhile, Wesley tries the patience of both his stern schoolteacher (Ellen Corby) and exasperated parents, who try their best to keep the family on an even keel. A selection of nostalgic songs, including "Pack Up Your Troubles in Your Old Kit Bag and Smile, Smile, Smile!," "'Til We Meet Again," "Love Ya," and the venerable title tune punctuate the slight episodic story. 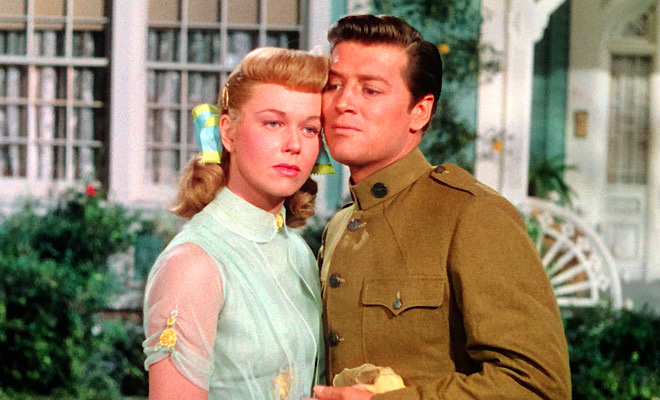 Countless similarities link On Moonlight Bay to Meet Me in St. Louis. Ames' participation and his doppelgänger character notwithstanding, there's the year-in-the-life, seasonal narrative format, a pivotal Christmas dance, beautifully sculpted snowmen in the yard (thankfully Wesley doesn't destroy them in a tearful tirade), a family move that causes friction (and is prompted by the father's desire to make life better for his brood), and a dinner scene featuring tomato soup. Instead of a boy next door, there's a boy across the street; instead of the ghoulish little Tootie, played by Margaret O'Brien, there's the impish Wesley, played with relish by Gray, who would soon achieve his greatest fame as Robert Young's son Bud on the classic TV sitcom Father Knows Best; and who better to step into Marjorie Main's imposing shoes as the cynical, wisecracking cook than the wry, arch, always amusing Wickes, who - in a funny running gag - gets battered by the swinging kitchen door whenever she's carrying a tray full of dishes.

On Moonlight Bay may be a musical, but most of the film's songs are sadly given short shrift. The numbers tend to lack imagination and panache, a surprising fact considering Del Ruth directed a number of lavish MGM musicals earlier in his career, including two Broadway Melody films, Born to Dance with Eleanor Powell, and Du Barry Was a Lady. Perhaps the low-key presentation is intentional to keep the movie grounded, but when you've got such assets as Technicolor and the golden-voiced Day at your disposal, they need to be maximized. Day doesn't sing nearly as often as we'd like, either alone or with MacRae, yet the two enjoy a comfortable chemistry that makes their romance believable. (The duo would make a total of five movies together.) At 29 and 30 respectively, Day and MacRae seem a smidgen too old to play college-age kids, although both exude a youthful vigor and golly-gee-whiz attitude that suits their characters and the film's period tone.

Ames works well with DeCamp, who brings warmth and sincerity to her level-headed role that - you guessed it -mirrors Mary Astor's part in Meet Me in St. Louis. And like Margaret O'Brien before him, Gray grabs a big chunk of screen time (a bit too much, if you ask me), but thankfully makes the most of every moment, filing a captivating performance that's devoid of any manipulative juvenile tricks. Of course the inimitable Wickes, with her withering expressions and brutally honest quips, enlivens every scene in which she appears and provides On Moonlight Bay with a couple of welcome jolts. 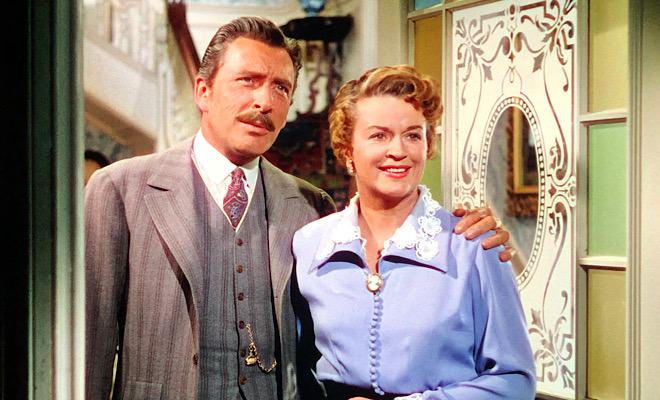 Without such winning personalities, the wispy, overly familiar plot would struggle to sustain interest, yet despite some narrative lulls, this wholesome, uncomplicated film worms its way into our hearts as it reminds us of simpler, less stressful days. It did the same back in 1951. On Moonlight Bay was so successful it spawned a sequel two years later that reunited all the principals and picked up where the story left off. By the Light of the Silvery Moon would mark the final pairing of Day and MacRae and prove to be every bit as popular as its predecessor.

Such is the lure of nostalgia, lost innocence, and the bonds of family, especially during difficult times. Maybe that's why On Moonlight Bay still strikes a chord today...and why Doris Day would consistently cite this modest musical as one of her personal favorites. 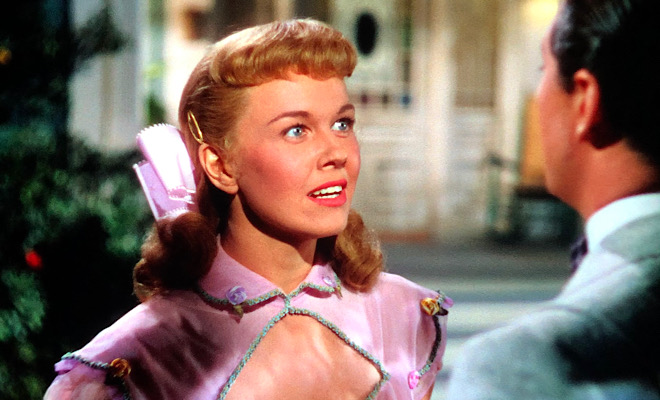 On Moonlight Bay arrives on Blu-ray packaged in a standard case. Video codec is 1080p/AVC MPEG-4 and audio is DTS-HD Master Audio 2.0 mono. Once the disc is inserted into the player, the static menu without music immediately pops up; no previews or promos precede it.

A brand new high-def master from a 4K scan of the original Technicolor negatives yields a glorious 1080p/AVC MPEG-4 transfer that faithfully honors Ernest Haller's lush cinematography. Faint grain supplies essential texture for this nostalgic film and maintains the feel of celluloid, while perfect color timing and wonderful clarity and contrast produce a pleasing picture that's packed with fine details. The intricate wallpaper patterns and oriental rug designs in the Winfield home are well defined, as are costume fabrics and decorative items. The rainbow hues of Technicolor, from bold primaries to delicate pastels, grab attention without appearing artificial. (The pink and green lettering in the main title sequence is especially fetching.) All the colors make a statement, but MacRae's red letter sweater, Day's red hair bows and winter coat, and all the red college banners really light up the screen. 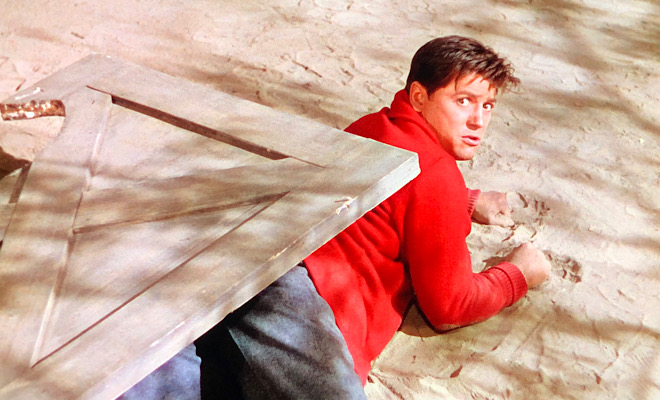 Blacks are rich and deep, shadow delineation is excellent (a silhouette shot of Day and MacRae is quite striking), whites are crisp and resist blooming, and flesh tones look natural and remain stable throughout. Sharp close-ups nicely highlight Day's fresh-faced look, and no nicks, marks, or scratches disrupt the purity of this pristine presentation. A few shots here and there appear a bit soft, but that's to be expected from a film of this vintage. Once again, Warner Archive revitalizes a Golden Age classic and makes a 70-year-old movie look almost brand new.

The DTS-HD Master audio 2.0 mono track supplies clear, well-modulated sound that's free of any age-related hiss, pops, or crackle. Excellent fidelity and tonal depth heighten the impact of the songs and showcase the beautiful vocal tones of Day's alto and MacRae's baritone, while a wide dynamic scale handles all the highs and lows of Max Steiner's lush orchestrations. Sonic accents like shattering glass, a gunshot, and the repeated smashing of crockery are crisp and distinct, and all the dialogue is clear and easy to comprehend. Though not quite as vibrant as some musical tracks, this one remains consistent and pleasing throughout.

If you love Meet Me in St. Louis, you'll find On Moonlight Bay to be a delightful knock-off. Director Roy Del Ruth's nostalgic musical about a year in the life of an average midwestern family can't come close to eclipsing Vincente Minnelli's masterpiece, but a cavalcade of old-time tunes, a warm-and-fuzzy story spiced with gentle comedy, and the infectious charms of Doris Day and Gordon MacRae all combine to create a wholesome, homespun film that romanticizes a bygone era. Warner Archive whips up another eye-popping transfer, supplies solid audio, and tosses in a few vintage supplements in this pleasing Blu-ray presentation that every fan of the adorable Day will want to add to their collection. Recommended.