For as many shark films Jaws inspired - an equal number of wild violent rampaging land animal movies were made. 1976’s Grizzly shares a number of plot beats with its aquatic predecessor, but the film has its own bloody take on the material making it a wildly entertaining show. Severin delivers this furious furry flick to Blu-ray with a strong A/V presentation and a bunch of interesting bonus features to match. If you’re a fan this is an easy call - Highly Recommended.

Deep in the woods, there is a terror stalking the land unlike anything anyone has ever seen. When campers start turning up dead, rendered limb from limb - Park Ranger Michael Kelley (Christopher George) knows he has a big problem on his hands. With his fellow rangers, a helicopter pilot (Don Stober), and a naturalist (Richard Jaeckel), Michael must find and hunt down the largest Grizzly the park has ever seen. When Michael’s boss refuses to close the park from the public - there may not be a camper, hunter, or ranger left to stop the beast.

When Jaws was hitting movie screens it was BIG news. Part of why the film was such a massive success was the marketing machine strategically timing press releases, scheduling the release of the book, teasing the first image of the shark - everything to whip people up to make sure they went to the theater that summer. The problem is when one studio starts a marketing blitz for a single film, they’re inspiring a huge number of imitators to scoop the movie. William Girdler’s Grizzly was unleashed less than a year after Jaws and quickly became one of the most successful independent horror films ever made.

While not being anywhere near the quality or success of Jaws it’s “Jaws with Claws” cousin Grizzly does a damn good job with what it’s got to work with. Shot deep in the Georga woods, this little upstart made good on its promise of delivering a slick movie on a small budget. There's plenty of suspense, great action sequences, impressive on-location photography, and a great cast to sell the show.

Sure, some of the acting is a little hammy and the first few bear attacks amount to little better than the Wampa arm attacking Luke and his Tauntaun but it works! Christopher George delivers a gravely dedicated performance and Girdler never lets the pace slow. If there’s a hole in the plot, it’s filled with another delightfully gory bear attack sequence so there's never any dead air or bloat.

I’ve mentioned in past reviews growing up watching horror movies on TV20 WXON’s Thriller Double Feature. That Saturday programming was my Horror movie education. As often as they ran Jaws 2 or Jaws 3 - they’d roll one of the numerous knock-offs. Most of the movies on there were edited for content, I remember when they ran Grizzly because it didn’t seem like they edited anything! Granted - this movie isn’t that gory, but when you’re all of five or six years old and seeing a kid on the screen lose his leg to a gigantic bear, it’s pretty damn intense! Growing up in the woods of Michigan, I was only afraid of two creatures - Predator and bears. Both could have been in my back yard and the thought freaked me out. 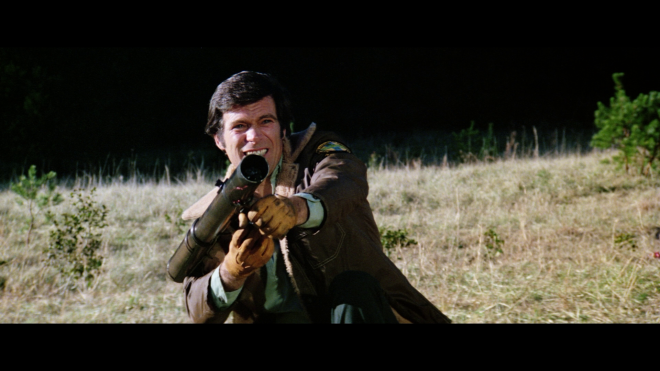 It’s been the better end of 20 years since I last watched Grizzly. It's just one of those old favorites I enjoyed a bunch as a kid but didn't feel the urgency to revisit so the years ticked by. I wasn’t quite sure what to expect with this outing; nostalgia can carry a revisit only so far. Thankfully this movie held up its end of the bargain. At 90-minutes the movie moves with a quick pace never letting itself bog down for too long before filling in with another intense and judiciously gory animal attack. It’s the kind of movie that aims to entertain and get out of the way and succeeds with its mission. It’s not the best movie ever made, but it’s good at what it does, and in the pantheon of Jaws imitations, it easily rests at the front of the pack.

Vital Disc Stats: The Blu-ray
Severin fills a big gap in horror fan’s collections by delivering Grizzly to Blu-ray. Pressed on a Region Free BD-50 disc, the disc is housed in a black keepcase with reversible insert art. If you ordered from Severin it came with a slick alternate o-card slipcover. The disc loads to an animated main menu with traditional navigation options. 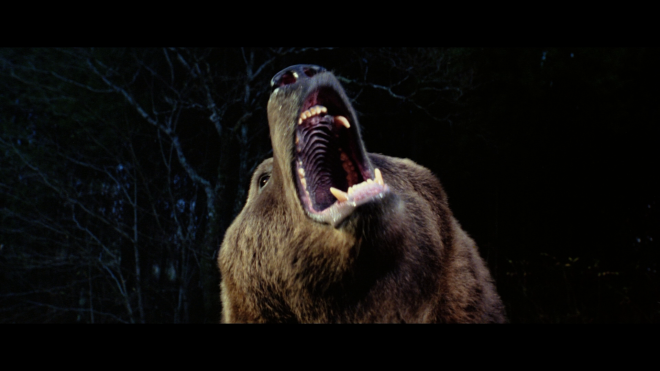 Sourced from a 2K scan of the internegative, Grizzly lands on Blu-ray with pleasing results. Certainly looking better than ever, this doesn’t have the sheen or spit and polish of a crystal clear restoration - and it’s probably the better for it. With some slight speckling and occasional dirt or grit and stray hair - the image has the character and feel of a high-quality drive-in theater print.

Even rough around the edges there’s a lot to appreciate with this transfer. Details are terrific. Facial features, the brief closeups of gore, the beautiful Georga wilderness, everything is on display. Grain is intact giving the image a natural film-like appearance. Colors are robust with bright bold primaries and healthy skin tones. Black levels can be a bit thick at times, but I imagine that’s a cooked-in affair given the location shooting and budget constraints. All in all, I’m very happy with how this one came out. 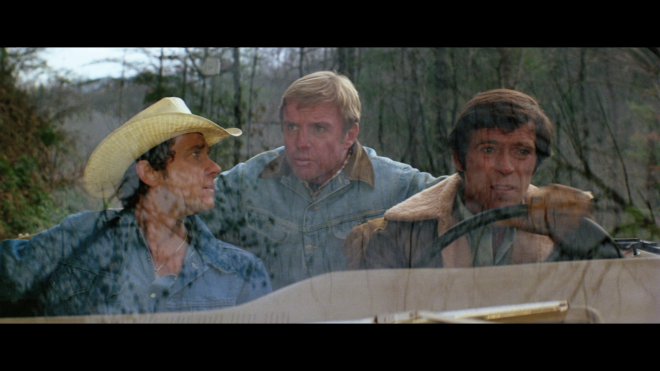 Grizzly enjoys a lively and engaging DTS-HD MA 2.0 mono mix that gets a lot of workload out of its soundscape. There’s always a welcome feeling of deep woods atmosphere and when the bear attacks things get really intense. Screams, bear roars, gurgling sound effects, music all layer nicely giving a nice open and spacious feel to the mix. Free of any serious hiss, pops, or dropouts, the mix is clean, the dialogue is clear, and the levels are on point without any need for monitoring. 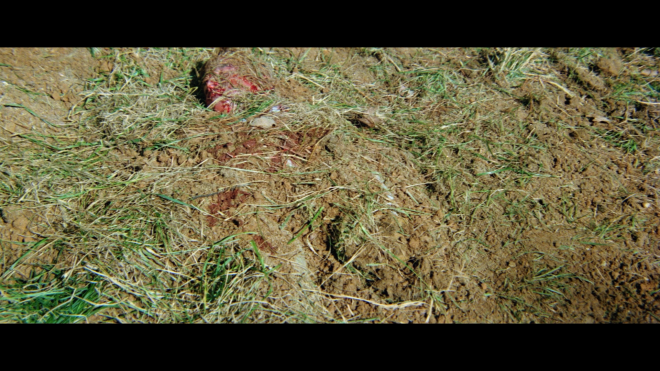 True to form for Severin, Grizzly comes packed with an excellent assortment of bonus features for you to pick through. At the top of the pack is an excellent audio commentary with Mondo Digital’s Nathaniel Thompson and Troy Howarth. These guys are always a wealth of information and listing to them banter about movies is always a joy. There’s never any dead air nor does it feel scripted like a film critic dissertation. A second audio commentary with producer David Shelton and actress Joan McCall. After that, we get a bunch of great cast/crew interviews and a vintage making-of feature. All good stuff well worth picking through.

Grizzly may not be the best of the Animal Attack horror sub-genre, but it’s a beast in its own right. Made in the wake of Jaws, Grizzly made a bloody splash of its own attacking drive-ins and theaters across the country. The film remains an entertaining man vs. beast feast with plenty of gore and action for genre fans. Severin Films delivers this fan favorite to Blu-ray with terrific results. The video transfer looks great, the audio is impeccable, and the bonus features will keep you busy for hours. If you love the movie or the genre - this is an essential pick up. Highly Recommended.