Promising Young Woman follows Cassie, a woman who is still coming to terms with her best friend's death and rape, by seeking an unusual path of revenge and forgiveness with those in her life. It's as important as it is entertaining with an all-star cast led by Carey Mulligan. The video and audio elements are both top-notch, but the lack of extras is something less than desired here, especially with this great film. Still, this comes HIGHLY RECOMMENDED! 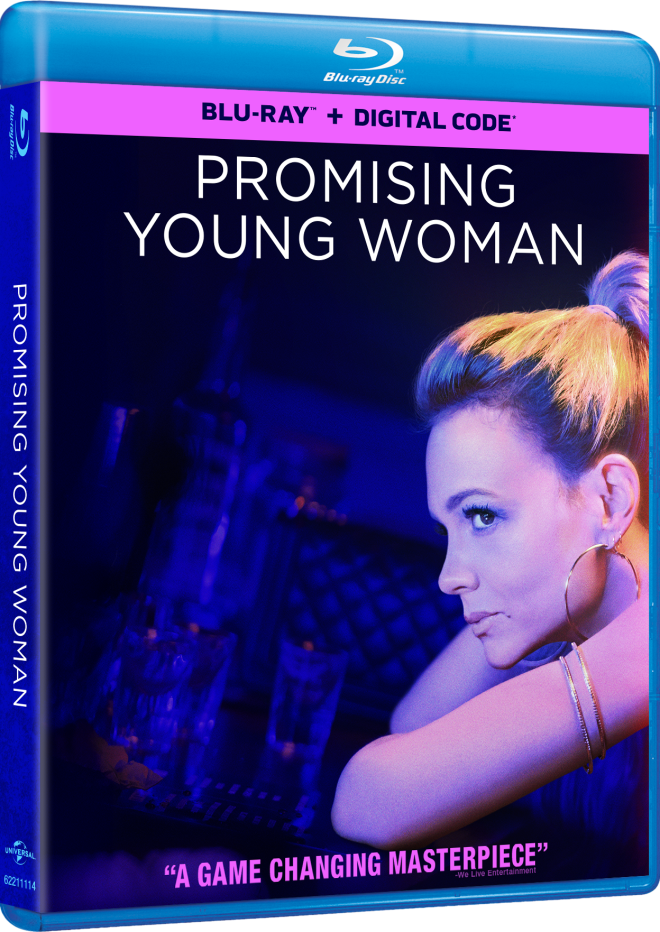 Falling in love, dating, and flirting can be the best thing about going through life. It can also be the scariest, most horrifying, and even deadly element at the same time as a thirty-year-old woman seeks revenge on those who raped her late best friend at a college party some years ago in Emerald Fennell's perfect movie Promising Young Woman. This serves to be the best film in years with a remarkable performance by Carey Mulligan and some extremely poignant and important messages that deal with many issues and problems in the current society. Fennell flawlessly tells this story and conveys these messages in a fantastic dark comedy that explores, revenge, forgiveness, and owning up to one's awful behavior and a possible redemption path.

The film introduces Cassie (Mulligan), who is seemingly too drunk to stand or talk in full sentences at a bar, as she lay by herself, trying not to fall asleep at the booth. A guy notices her and heads over in what is to be a genuinely concerned person asking if she's okay. This quickly turns into a predator ready to pounce on his prey back at his place, where he encourages her to drink more until she passes out so he can rape her. Little does he know, Cassie is not at all drunk and lets him on her little secret that she's not gonna take this kind of treatment. As Cassie moonlights as a coffee barista, her goal in life is confronting these male predators who seem to prey on drunk women in public. She's not out to torture or kill anyone yet, but she wants to confront them and make each one come to terms with themselves on how slimy and evil they truly are.

As the film plays out, it's revealed that Cassie's best childhood friend, the same friend she went to medical school with named Nina, was raped in college by a group of guys that led to this happy college girl committing suicide. Nobody was held accountable for it. Even the lawyers and dean of students brushed it under the rug, where the rapists got away with it and went on to lead happy, successful lives. This is where Cassie comes to a standoff with everyone who made it impossible for her best friend to go on living.

As much as Promising Young Woman hints at revenge, it also tackles the forgiveness angle and moves on from such a tragedy as it so heartbreakingly does in a few certain sequences, including one between Cassie and Nina's mother. It also explores what lengths someone would go through to make things right when their best friend was raped which led to their death. There is a darkly funny element to it as well, where these slimy men think they are slick, and actual "nice" men try and actually rape Cassie while she is either passed out or too drunk to function. It's sickening and angering at the same time, but also somewhat comedic in how society has gone on for far too long, accepting this type of behavior, which Cassie is all too aware of. This film just gets every element right and pitch-perfect.

Fennell's first time behind the camera is a grand slam around the bases, touching on phenomenal story-telling, wonderful use of the camera with fantastic colors and angles, along dynamite performances by everyone. The script is wonderfully written with the perfect mix of drama and black comedy too. Promising Young Woman is one of the best films of recent memory and is not only an entertaining watch, but it's also an important one too.

Promising Young Woman flirts its way to Blu-ray + Digital from Universal with stunning video and audio transfers.  The disc is housed in a hard, blue plastic case with a cardboard sleeve. There is an insert for the digital code inside. The artwork is absurdly disappointing as it features just a picture of Carey Mulligan looking off into space. This artwork is laziness at its finest, considering the truly amazing artwork that was used for its initial release. Here's hoping for a future release down the road with better bonus material and better artwork. 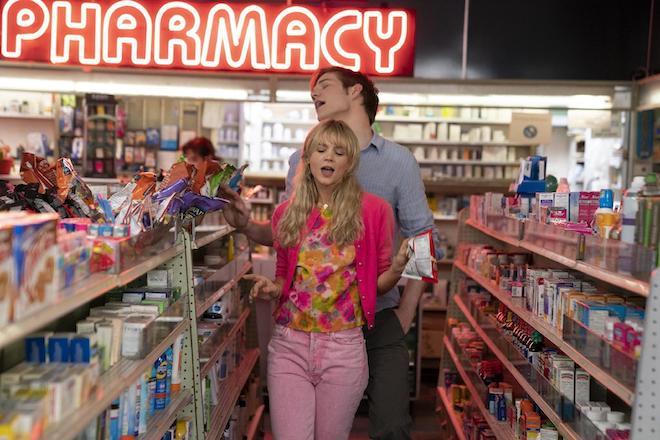 Promising Young Woman comes with an extremely colorful 1080p HD transfer that showcases its bubble gum pop aesthetic and exquisite detail. The tone, themes, and story of this film is dour, scary, and ultimately very series down to its core, but Emerald gave it a dark comedy wash and therefore made what could have been something dark stylistically and visually into a bright a vibrant color palette that looks like it could have been implemented into any teenage light-hearted comedy. There are bright pinks, pastel blues, and yellows, wide arrays of blues and purples throughout.

In Cassie's real world, the colors are more muted and natural, but when she's plugged into her mission, colors are hyped and enhanced, almost like a fantasy, and they all look bold, rich, and beautiful, from the night clubs to the coffee shop where she works, and even to her costume choices. It's simply wonderful and brilliant eye-candy. Black levels are all deep and inky and the skin tones are natural.

The detail is vivid and sharp in each sequence, revealing intimate makeup applications, facial pores and lines, individual hairs, and even textures in the many costumes. Wider shots give way to some props and sets in the background as well. This is a fantastic-looking image that just dazzles from start to finish with zero instances of aliasing, banding, or noise. 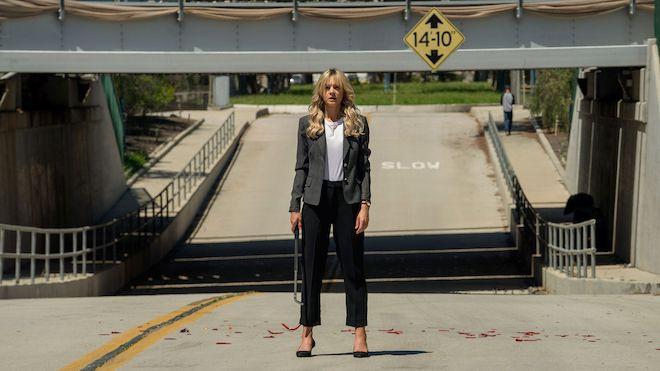 This release comes with an excellent lossless DTS-HD 7.1 audio mix that is energetic and thrilling. That might come as a surprise as there are no big action sequences or gun blasts, but it's the smaller ambient and nuanced sound effects that make this audio track really shine. The sequences in the bars and clubs boast a top-notch audio design that perfectly mixes glasses clanking, background bar-patron chatter, intense music, and dialogue perfectly.

The scenes where touching and kissing are front and center have an enhanced sound that is louder than normal, where the slightest kiss or touch can be heard over everything, which is a great stylistic choice. The bass kicks in when the score cues and song choices are implemented with a nice low rumble that is never rocky. Vehicles driving by and even one scene of glass being smashed sound wonderful. Dialogue is always clear and clean and free of any audio problems. 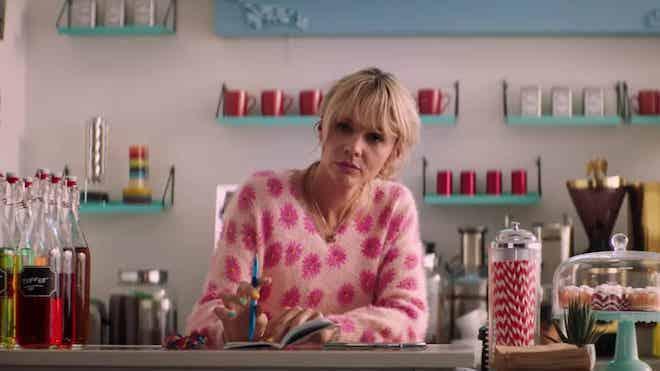 There are only about 11 minutes of bonus features here, all plucked from the same short interviews but separated out. This is EPK style stuff, but it seems like most everyone came aboard to talk about the film. Just wish there was more. 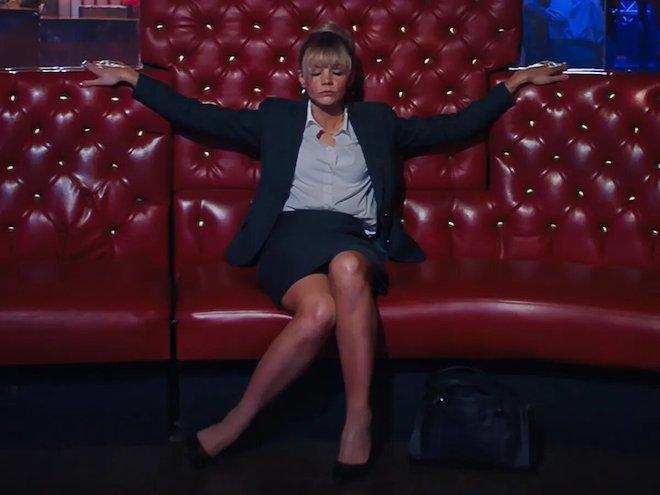 Promising Young Woman is one of the best films of the last few years. It's poignant, important, highly entertaining, thrilling, and includes some top-notch performances from its cast with the spotlight on Carey Mulligan. This is a must-see movie and is the start of a phenomenal career behind the camera for Emerald Fennell. With an utterly beautiful video presentation and lively audio mix, and despite the bland bonus features, this release is Highly Recommended!