Overview - Acclaimed screenwriter Scott Frank makes a mind-blowing directorial debut in THE LOOKOUT, a gritty, high-tension crime thriller starring Joseph Gordon-Levitt, Jeff Daniels and Isla Fisher. Chris "Slapshot" Pratt (Gordon-Levitt), whose once-bright future has been dimmed by a head injury, is a night janitor at a bank. Lonely and frustrated, Chris falls prey to a con man's seductive promise of romance and a better life, and agrees to help rob the bank where he works.
OVERALL
Worth a Look

Most recognizable from his stint on the TV sitcom "3rd Rock from the Sun," Joseph Gordon-Levitt has been popping up on television and the big screen since he was seven years old. I never paid his performances much mind until I watched a 2006 indie masterpiece called 'Brick.' Simply put, Gordon-Levitt was astounding -- his noirish portrayal of a high school loner was expertly nuanced and announced his arrival as a serious actor. So it was with high expectations earlier this year that I snuggled down in my local theater's cushy seats to soak up 'The Lookout,' a film that had earned strong buzz among critics and film fans alike.

The film itself tells the story of Chris Pratt (Gordon-Levitt), a student who gets into a car accident that kills two of his friends and leaves his short-term memory in tatters. Four years after the incident, Chris remains unable to perform even the most remedial tasks, and the only work he can find is as a night janitor at a local bank. In order to keep himself on track, he keeps multiple lists that guide him through his day to day life -- his apartment is a collection of scribbled post-it notes and his daily schedule is written out in meticulous detail. His only friends are a well-intentioned blind man named Lewis (Jeff Daniels) and a nightshift police officer named Ted (Sergio Di Zio).

Everything is a ritual for Chris until he meets Gary (Matthew Goode), an old friend from school who introduces him to a new crowd, including Cork (Aaron Berg), Marty (Morgan Kelly), an enigmatic man called Bone (Greg Dunham), and a flirt named Luvlee (Isla Fisher). Chris is excited to make new friends, but he soon discovers that Gary and his crew are interested in him to help them rob the bank he works for. The ensuing power struggle puts Chris to the test as he is torn between loyalty, selfishness, and morality.

From the very beginning, Gordon-Levitt and the supporting cast are in top form. His portrayal of Chris as a tormented everyman drowning in disability is both heart-wrenching and believable. The always dependable Jeff Daniels adds a welcome breath of fresh air to the somber nature of the rest of the film, crafting Lewis into a wise-cracking guardian angel who serves both as Chris's conscious and his guide. Likewise, the villains are all suitably malicious and Goode's performance as Gary is particularly effective as he worms his way into Chris's brain.

Unfortunately, as strong as these performances are, I felt they were ultimately undone by a screenplay that deflates so drastically in the anti-climactic third act that I was left waiting for a twist that never came. Worse still, by the time the ending rolls around, it's so sugary and convenient that it feels disjointed from the tone of the entire film.

Honestly, having seen the film twice now, both times I've walked away puzzled by the generally strong reception it has received. A lot of critics praised 'The Lookout' for its focus on people with disabilities, but to my eyes, Chris's handicap is simply a dues-ex-machina that facilitates the film's strained premise. Likewise, while others have cheered the film's twists and turns, I found them to be nothing more than ordinary.

To be fair, 'The Lookout' certainly isn't an awful film. In addition to the strong performances, it's beautifully shot, and had it been played as a straight drama, I might have fallen for it hook, line and sinker. Unfortunately, as is, to me it feels more like a mystery movie without the mystery, and it just doesn't strike me as the exceptional film others have found it to be. 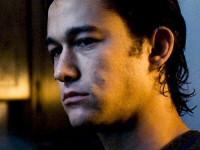 Presented in 1080p with the AVC MPEG-4 codec, this high-def transfer of 'The Lookout' packs plenty of muscle to match the film's gorgeous cinematography. The color palette is cold and vibrant -- blues and yellows pop off the screen against a series of inky blacks and foreboding shadows. Fleshtones are natural, there aren't any distracting noise or compression issues, and textures and details are crisp. Just take one look at any of the scenes in the bank or the diner -- background elements are sharp and reveal the aging grime of each setting. Even more dimly-lit scenes retain a nice contrast and there aren't instances of murkiness or under-saturation.

A heavier layer of grain is evident throughout the film, but the depth of the image is rarely compromised. Likewise, a handful of more stylized shots have noticeably softer regions which may prove distracting for viewers, but they definitely appeared in the film's theatrical print, and are no fault of this transfer.

I'm becoming increasingly impressed with Disney's high-def video track record. From blockbusters like 'Pirates of the Caribbean' flicks to a lower budget character-studies like 'The Lookout,' the studio continues to wow with its flashy Blu-ray transfers. 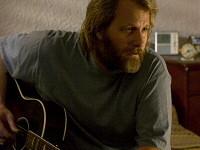 Though it doesn't have a lot in the soundscape to work with, 'The Lookout' features a technically robust uncompressed PCM 5.1 surround track (48 kHz/24-bit/6.9 Mbps) and a thinner Dolby Digital 5.1 mix(640 kbps). Even though the PCM track doesn't have a lot in the soundscape to work with, it still manages to create an intricate world with ambiance and environmental acoustics. Listen to the dialogue in a scene in the bank and then skip to one in a smaller apartment -- notice the difference? The sound designers have clearly worked hard to make each setting unique and realistic. Effects don't sound canned, dialogue is both lush and well prioritized, and there is a fullness to the soundfield that takes advantage of the rear speakers for subtle enhancements.

That being said, aside from the opening scene and the more action-oriented elements of the final act, the remainder of the film is a quiet experience that relies on viewer immersion rather than surround wizardry. As such, the majority of the track pulls forward and inhabits the front three speakers. The results aren't terribly involving, but still this track handles what it's given with a technical proficiency that sets it apart from other quieter mixes released in high-def. 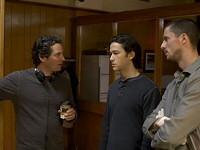 This Blu-ray edition of 'The Lookout' ports over all of the extras from the standard-def DVD, but unfortunately it's fairly slim pickings.

First up is a commentary track with writer/director Scott Frank and director of photography Alar Kivilo. It starts out interestingly enough with some nice background on the project and the actors, but it goes on to include a bit too much back-patting and technical chit-chat about color choices and location shooting for my taste. I would have enjoyed hearing a bit more color on the film's characters and story instead.

"Behind the Mind of Chris Pratt" (9 minutes) is a brief featurette that includes interviews with the director, Gordon-Levitt, and other members of cast and crew discussing the film's protagonist. "Sequencing The Lookout" (20 minutes) is a more typical behind-the-scenes featurette that examines casting, shooting, and the overall production.

(Note that while the video-based extras are presented in high-definition, the interviews and behind-the-scenes video appear to have been upconverted from 480i/p and reformatted to match the accompanying film clips.) 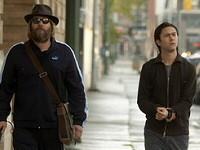 After hearing so many good things about 'The Lookout,' I couldn't help but be disappointed by what I saw as simply an average heist flick. But while opinions on the film itself vary, this Blu-ray definitely delivers with an excellent video transfer and a solid uncompressed PCM track. The only disappointment is relatively slim supplements package, but that shouldn't deter fans of 'The Lookout' from picking this one up.

Sale Price 21.98
Buy Now
3rd Party 3.6
In Stock.
See what people are saying about this story or others
See Comments in Forum
Previous Next
Pre-Orders
Tomorrow's latest releases