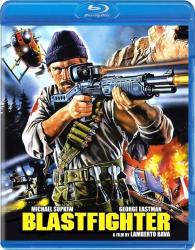 Michael Sopkiw (After the Fall of New York, Devil Fish) stars in this Southern-fried action thriller as an embittered cop just released from prison after serving a lengthy term for killing the man who had murdered his wife. Wishing for a peaceful, serene change of pace and a chance to catch up with his daughter (Valentina Forte, Cut and Run), he moves to rural Georgia to live off the land. Alas, this pastoral existence is short-lived thanks to a sleazy group of poachers who supply an even sleazier scientist with live animals for sadistic biological experiments. Armed with the superweapon Blastfighter, he goes on a bloody rampage against the poachers in this classic Italian revenge movie, also starring George Eastman (Ironmaster, The Grim Reaper, Rabid Dogs) and genre favorites Massimo Vanni (Zombie 3) and Ottaviano Dell'Acqua (Zombie).Now watch this Quentin Tarantino approved slice of drive-in mayhem from director Lamberto Bava (Demons, A Blade in the Dark) in high-octane HD!